How to watch Manifest season 2 online from anywhere

Trying to find a way to watch Manifest season 2 online from outside the US? You’re in luck! We’ll show you how to live stream Manifest season 2 while traveling abroad using a Virtual Private Network (VPN).
Mark Gill TECH JOURNALIST, VPN AND PRIVACY SPECIALIST 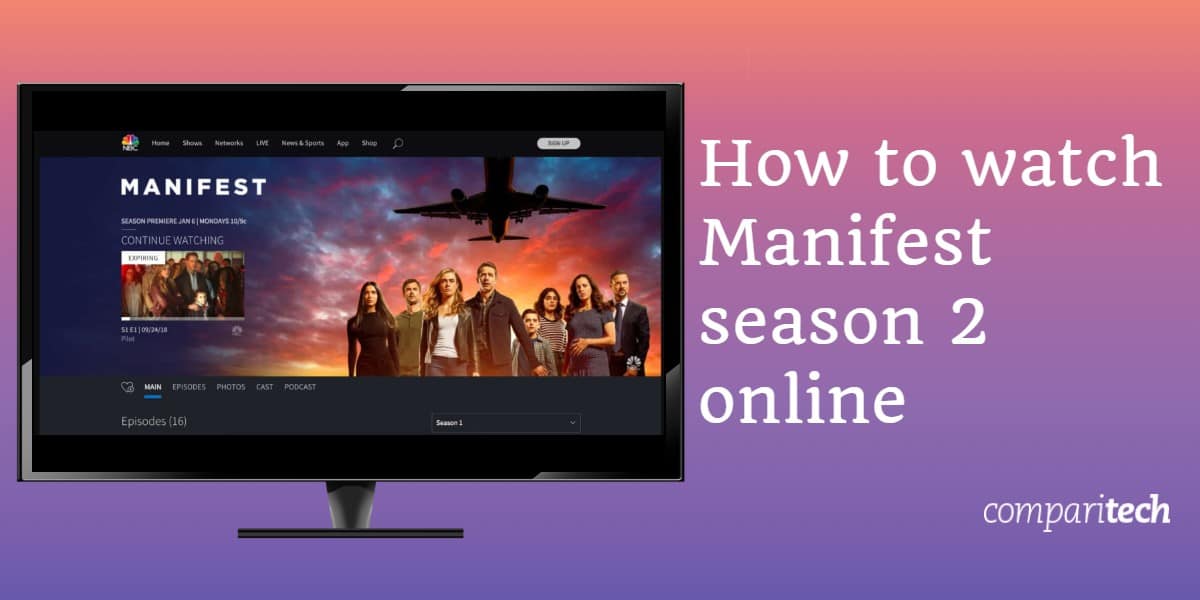 Manifest season 2 will premiere on Monday, January 6 at 10 PM EST (7 PM PST) with a new episode airing every Monday. If you’d like to watch Manifest season 2 outside the US, you’ll need a cable TV subscription or access to a TV streaming service such as Hulu or YouTube TV (more on these later). What’s more, because NBC’s live content is geo-restricted, you’ll also need a VPN to watch from abroad.

In this article, we’ll only be recommending official sources for watching Manifest season 2. The reason we don’t recommend unauthorized streams is that they’re often taken offline for copyright infringement. Worse still, they usually offer low-resolution video and are frequently interrupted with lag and buffering. You can live stream Manifest season 2 on NBC anyway so there’s no reason to risk unreliable streams from unofficial sources.

Manifest season 2 will only be broadcast on region-locked platforms which means you’ll need a VPN to watch when traveling outside the US.

How to watch Manifest season 2 online with a VPN

By connecting to a VPN, you can obtain an American IP address and trick region-locked services into thinking you’re located in the US. This lets you unblock NBC and watch Manifest season 2 from abroad. All you need to do is follow the steps below.

Here’s how to watch Manifest season 2 online from anywhere:

Manifest season 2 will air live on NBC. For this reason, it’s a good idea to test your VPN with NBC in advance of the season 2 premiere. If you encounter any issues, you should have plenty of time to contact your VPN’s customer support for further guidance.

How to live stream Manifest season 2 on US TV

Manifest season 2 will premiere on NBC. If you’re in the US and looking to stream Manifest live, you only need to go to the NBC website and sign in with your cable TV provider details. This doesn’t cost anything extra and is the easiest way to watch.

You may be interested to know that you can also watch Manifest season 2 without a cable TV subscription. The following streaming services all offer NBC as part of their subscription packages: AT&T TV Now (from $65 USD/month), FuboTV ($54.99/month), Hulu + Live TV ($54.99/month), Sling TV (from $30/month), and YouTube TV ($49.99/month). Again, you’ll need to connect to a US server to unblock these services abroad.

The above services are region-locked and only available in the US. However, by connecting to a server in the US, you can get a US IP address which will allow you to unblock NBC from anywhere in the world. Still don’t have a VPN? ExpressVPN includes a 30-day money-back guarantee. As such, you can try it out risk-free and receive a full refund if you’re unsatisfied.

Where else can I watch Manifest?

While Manifest season 2 will premiere exclusively on NBC, it’s highly likely to be coming to various TV channels and streaming services in the coming months. We can expect this because season 1 is already available on many different platforms in a number of countries. This includes Hulu in the US, Sky TV in the UK (you can watch online via Sky Go), and 9Now in Australia. It’s worth noting that as all of these services are geographically restricted, a VPN is required if you’re looking to watch from abroad.

What can we expect from Manifest season 2?

Season 1 of Manifest ended on multiple cliffhangers. Of course, there’s the “expiration date” for the passengers of Flight 828. There was also the added suspense of the gunshot and the question of whether Michaela, Jared, or Zeke was wounded or killed. We’re sure to see some of these addressed in the season 2 premiere which, rather appropriately, is titled “Fasten Your Seatbelts”. While only 13 episodes have only been confirmed by NBC, this may well be increased to 16 as was the case with season 1.

Which cast members are returning for Manifest season 2?