How to watch Rick and Morty season 5 online abroad 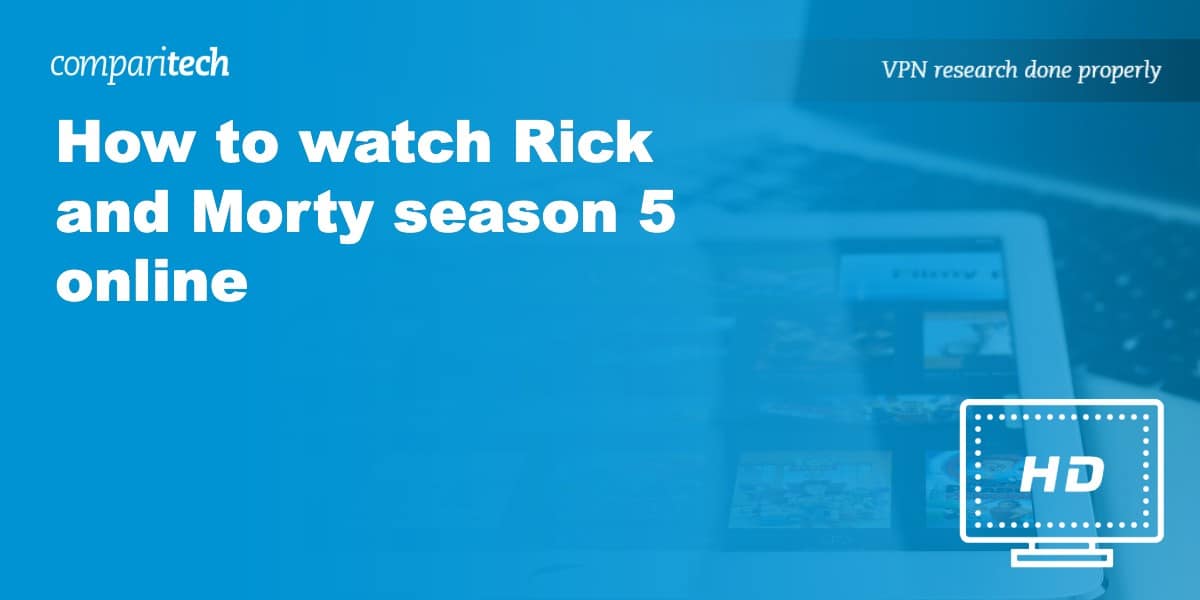 Rick and Morty season 5 is set to premiere on Sunday, June 20 at 11 PM EST (8 PM PST). While fans had to suffer a two-year wait between seasons 3 and 4, it’s only just over a year since season 4 ended. Depending on your location, you may find that you can’t watch Rick and Morty season 5 due to geographic restrictions. Fortunately, you can unblock and live stream it with the help of a Virtual Private Network (VPN).

We’re only recommending official sources for watching Rick and Morty season 5 online. While unlicensed streams may be available, they’re generally not worth your time or effort. One reason for this is that unauthorized sources can be taken offline for copyright infringement. Combine this with inferior video quality, lots of lag, and long buffering times and it becomes clear that this method will most likely cause you to miss out on some of Rick and Morty season 5.

Rick and Morty season 5 is only available on region-locked platforms. As such, you’ll need to connect to a VPN in order to live stream episodes from abroad.

VPNs hide your real IP address, replacing it with that of the server you’re connected to. This means that if you use a US-based server, you can trick American streaming services into letting you use them abroad. Sound confusing? Don’t worry; here’s a step-by-step guide to watching Rick and Morty season 5 online from anywhere:

Rick and Morty season 5 will air live on Adult Swim. Don’t want to miss out on the season 5 premiere? You should test your VPN with Adult Swim ahead of time. If you happen to encounter an issue, you’ll have enough time to troubleshoot it with your VPN’s customer support.

NordVPN is offering a fully-featured risk-free 30-day trial if you sign up at this page. You can use the VPN rated #1 for Adult Swim with no restrictions for a month - great if you want a chance to try before you buy.

How to watch Rick and Morty season 5 on US TV

You can watch Rick and Morty season 5 on Adult Swim. In order to watch live, you’ll need to sign in via your cable TV provider. However, it’s worth knowing that if you’re willing to wait week or so, new episodes then become free-to-watch.

If you really can’t wait and want to watch Adult Swim without cable, you could watch via Hulu with Live TV and YouTube TV, both of which cost $64.99 USD per month. Both of these services offer a free trial, so you can sign up and have plenty of time to test them out for free with Rick and Morty season 5.

Adult Swim is only available in the US. Despite this, with a VPN, you can live stream Rick and Morty season 5 online from anywhere. NordVPN comes with a 30-day money-back guarantee. This means you can try it out risk-free and claim a full refund if you’re not satisfied.

Where else can I watch Rick and Morty season 5 online?

Rick and Morty has a cult following across the world, so it’s only natural that it’d be available for streaming overseas. Below, we explain which networks are showing Rick and Morty season 5 where you are:

Rick and Morty season 5 will premiere in the UK just one day after its initial US premiere. Indeed, it’s coming to E4 on Monday, June 21 at 10 PM BST. You’ll therefore be able to watch it on-demand afterwards. Better still, you’ll be able to do so completely free-of-charge (albeit with ads) on All 4.

You’ll have to be quick, though, as new episodes are only available for 30 days after airing, and there’s no concrete information as to where you’ll be able to watch when they’re removed (odds are Netflix UK will get season 5 at some point, but there’s no telling when).

Channel 4’s E4 content is geo-restricted and only available in the UK. If you’re traveling abroad, you can access All 4 by obtaining a UK IP address via a VPN.

If you’re in Australia, things are nice and easy: Rick and Morty season 5 should be following previous seasons and coming to Netflix. Plans start at $10.99 AUD per month. Keep in mind that Netflix is region-locked and Rick and Morty isn’t available everywhere. To watch it from outside of Australia, you’ll need a VPN.

What can we expect from Rick and Morty season 5?

Like previous seasons, there will be a total of 10 episodes in Rick and Morty season 5. These will air on a weekly basis. As always, there are some interesting episode titles which include “Mort Dinner Rick Andre” and “Mortyplicity”.

As in previous seasons, most episodes are self-contained adventures, so don’t expect a long-running, intricately-woven narrative. That said, season 5 is like to have some of the most memorable episodes to date. In fact, as we can see from the season 5 cold open clip, we’ll quickly be introduced to Mr. Nimbus, Rick’s nemesis.

Which cast members are returning for Rick and Morty season 5?

All of the key cast members return. This includes Justin Roiland as characters Rick and Morty, Chris Parnell as Jerry, Spencer Grammer as Summer, and Sarah Chalke as Beth. As in previous seasons, there’ll be plenty of guest stars voicing characters. Indeed, season 5 is set to feature Timothy Olyphant, Christina Ricci, and Alison Brie.

Can I use a free VPN to watch Rick and Morty abroad?

No. Although there are some free VPNs available on the market, they are not suitable for streaming online. Free VPNs are oversubscribed, and they have very few servers. This causes the VPN to be highly congested, which results in bad speeds. This sluggishness is exacerbated if the free VPN provider implements bandwidth throttling.

In addition to being slow, free VPNs do not have servers that work to access streaming services. This is because it is easy for streaming platforms to block IP address ranges associated with free VPNs. As a result, you will need a secure premium VPN to watch Rick and Morty.

Finally, we recommend against using free VPNs for privacy and security reasons. Free VPN providers need to make a profit, and they do so by turning your data and browsing habits into a revenue stream. As a result, free VPNs have extremely invasive privacy policies that allow them to sell your data to marketing companies and data aggregators.

Furthermore, free VPNs have been found to lie about the level of protection they provide, sometimes claiming to have encryption when they have none. Add to this app vulnerabilities, data leaks, and even spyware-filled apps, and you can see why free VPNs are a danger to your online health.

Is there anywhere to watch Rick and Morty for free?

You can stream all seasons of Rick and Morty free and on-demand on All4 if you live in the UK. The entire series frequently airs on Adult Swim for US residents - the adult equivalent of Cartoon Network. However, you won't be able to select which episode you want to watch using Adult Swim as the show is aired live.

For users outside of the US and the UK, the only way to stream the show free on All4 or Adult Swim is by using a VPN. However, this may be against the terms of the streaming provider.