Friends is leaving Netflix! How to watch every season of Friends online

Looking to stream Friends online? This show might have left Netflix US, but it’s still available elsewhere. Below, we’ll explain how to watch every episode of Friends from anywhere (even abroad) using a Virtual Private Network (VPN).
Ian Garland Streaming, Kodi and VPN Expert 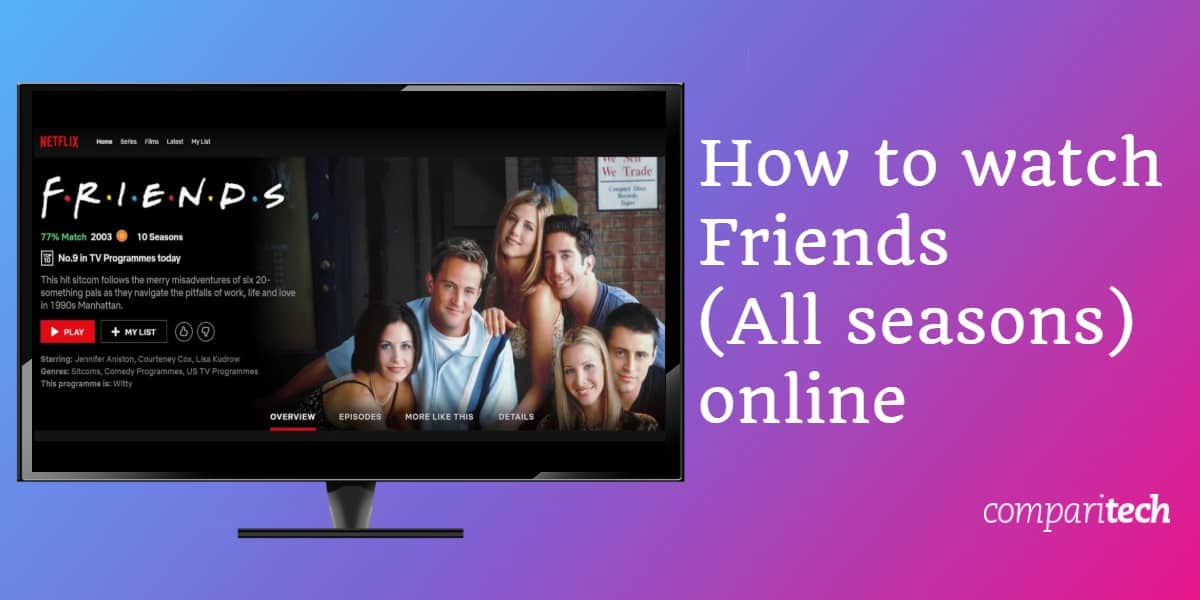 Due to a licensing renegotiation, Friends left the American version of Netflix on January 1, with HBO planning to use it to draw users to its new streaming service, HBO Max, when it goes live in May. Luckily, though, if you’re in the mood to stream Friends online, you don’t have to wait that long; below, we’ll let you know where and how you can watch every season of Friends from abroad.

Friends has been one of Netflix’s most-watched shows in recent years, so it’s almost certain that unlicensed streams are available. However, we do not recommend using them. To begin with, the video quality tends to be very poor, and further, these streams are frequently taken offline for copyright violation. There are plenty of legitimate ways to watch Friends online, though, and broadcasters in several countries, meaning there’s really no reason to use third-party streams.

This show is only available on geo-restricted streaming services. As such, if you’re traveling abroad and there’s no official broadcaster in your country, you’ll have to use a VPN to watch Friends online.

How to watch Friends online from anywhere with a VPN

So what exactly is a VPN and how can it help? Well, essentially, VPNs let you connect to servers all over the world, which allows you to obtain an IP address from another country. Region-locked streaming services see this and are tricked into letting you watch from abroad. Don’t worry, it’s much simpler than it sounds; below you’ll find a quick guide to streaming Friends abroad.

Here’s how to watch Friends (All seasons) online from anywhere with a VPN:

How to stream Friends on US TV

Although HBO Max won’t launch until sometime in May, we do know that every episode of Friends will be available. We also know that this service will cost $14.99 USD per month, but further details are scarce at the time of writing.

Can’t wait until then? You have two other options for streaming Friends online: either buy individual seasons on Amazon Prime Video for $19.99 each (single episodes cost $1.99) or watch whichever episodes are airing on TBS. The latter is the better choice for most people, not only because TBS shows around 50 episodes a week, but because this service is completely free.

All of the services above are region-locked, and Amazon’s content changes from one location to another. This means that if you’re traveling outside of the US, you’ll need a VPN to use these platforms. Don’t have one yet? ExpressVPN offers a risk-free 30-day money-back guarantee that allows you to claim a full refund if you’re unimpressed.

Where else can I watch Friends online once it leaves Netflix?

Friends might be based in New York, but it has a huge international following, and accordingly, is available for streaming in several different countries. Read on to find out which networks are broadcasting Friends where you live:

Relax — Friends is still available on Netflix UK. This service costs £5.99 per month, but there’s a one-month free trial. This might not be enough time to watch every episode, but you should be able to clear a decent portion before the trial period ends.

Channel 5 shows back-to-back episodes of Friends most mornings, but unlike the majority of this platform’s content, you can’t watch these on-demand. Plus, there’s no live stream on the My5 website. You can, however, watch Channel 5 live and free of charge on TVPlayer.com.

Netflix UK, My5, and TVPlayer are all region-locked. If you’re on vacation and looking to use these services from abroad, you’ll have to connect to a British VPN server first.

Things are nice and simple for Canadian fans: every season of Friends is available on Netflix. You could also purchase each season individually on platforms like Amazon Prime Video or iTunes, but there’s really no reason to when a monthly Netflix subscription costs just $9.99 CAD. Remember, though: you’ll have to either be in Canada or connected to a Canadian VPN server to watch.

Stan currently offers every single episode of Friends. Plans start at $10 AUD per month, although there’s a 30-day free trial, meaning you can watch quite a few episodes before being charged.

If you’re an existing Foxtel TV customer, you can sign in to the Foxtel Go app and watch Friends live every day on Fox Hits. Want to stream Friends live online without cable? Just create a Foxtel Now account instead: these start at $25 and include a 10-day free trial.

Stan, Foxtel Go, and Foxtel Now all require you to be in Australia before you can watch. Despite this, you can access these services as normal from abroad by connecting to one of your VPN’s Australian servers.

Is there any chance of a Friends reunion?

First, let’s start by tempering our expectations: people have been speculating about a Friends reunion or reboot for years. Additionally, Jennifer Aniston, one of the show’s stars, said that it wasn’t happening as recently as October.

However, there is a small glimmer of light for long-term fans. Aniston did hint that the original cast were working on something, and rumors are swirling that it could be some sort of unscripted special episode that coincides with the launch of HBO Max. Whatever it turns out to be, though, HBO can count on it to draw a massive number of viewers.