Which countries pay the most and least for Amazon Prime Video?

Amazon Prime Video subscriptions vary dramatically on a country-by-country basis when it comes to cost-effectiveness. We break down subscription price vs library size to determine the cost per title.
Rebecca Moody Head of Data Research 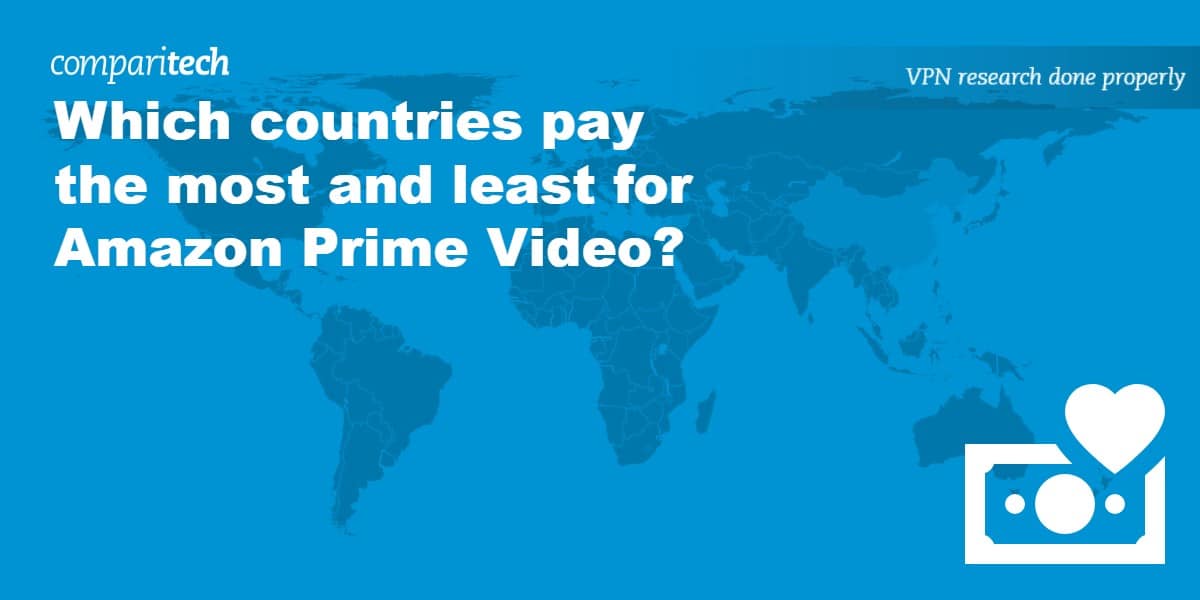 To find out which countries are getting the best value for their money with their streaming services, we regularly analyze the differences in library sizes and monthly costs across several platforms. In this research, we have found that Amazon Prime Video subscriptions vary dramatically on a country-by-country basis when it comes to cost-effectiveness.

While Prime Video has often been regarded as one of the cheaper streaming platform options when compared with the likes of Netflix, Hulu, and Disney+, it, like many other platforms, has upped its pricing for a number of countries in recent months.

For example, in mid-September 2022, several European countries (the UK, Ireland, France, Spain, Germany, and Italy) saw price increases of around 13.8 percent. For example, the UK and Ireland now pay $10.96 per month (rising from $9.63). This makes their subscription fees over 20 percent higher than Americans’ fees of $8.99.

These prices are also in stark contrast to some of the cheapest places to get Prime Video, e.g. Turkey, where the monthly cost is less than 50 cents! But is Turkey the most cost-effective place to have a subscription, or are its low fees met with a minimal number of titles? And how have the recent price hikes affected the likes of the UK (which, in our previous study, was the most cost-effective place for a Prime Video subscription)? We answer these questions and more in this article. 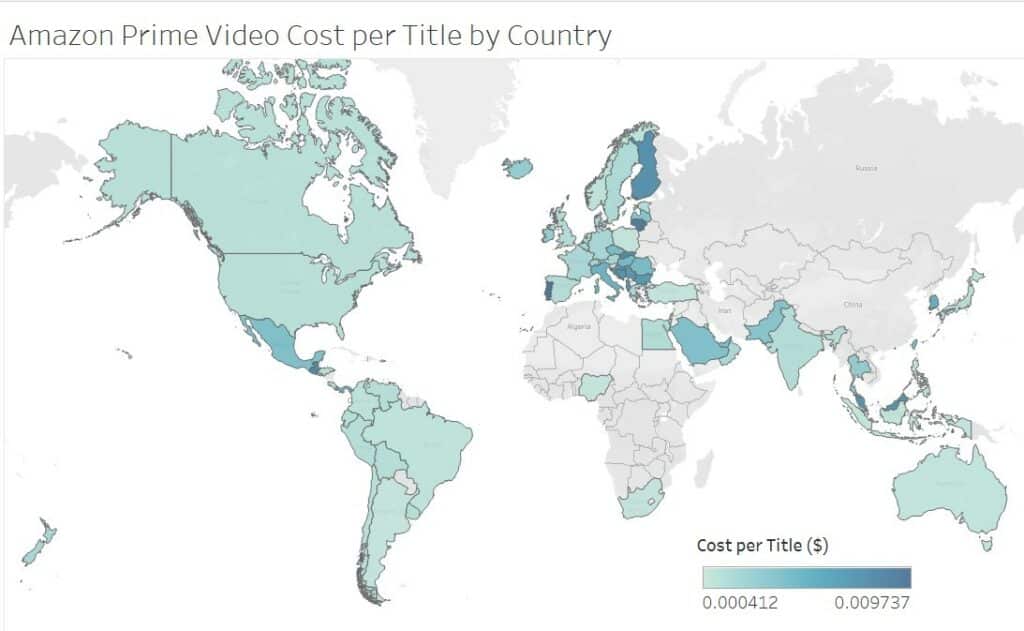 Please note: the prices included in our study are the price for Prime Video and may or may not include other features on Amazon (e.g. delivery options). Where possible, however, we have included the service for Prime Video only. The US, for example, charges $14.99 for Amazon Prime subscription, which includes Prime Video, but also charges a lower price of just $8.99 for Prime Video only— the latter of which was included in this study. The prices are also the base price as advertised by Amazon. They do not include the various taxes and other charges users may face. We are aware that several countries, including Argentina, have these charges, but our study focuses on the price charged by Amazon. Equally, costs are quoted on the monthly subscription price. In some countries, annual subscriptions are offered, which may be cheaper than the month-by-month price.

Is Prime Video good value in your country?

In order to determine which countries were receiving the most cost-effective Prime Video subscription, we looked into a number of factors.

First, we ascertained the number of TV shows and movies available in 73 countries (according to current Just Watch figures). After adding the two figures together, we divided this number into the total cost of Prime Video per month in each country.

Second, we analyzed the overall cost per month in each country to see how these figures were compared (using the exchange rate at the time of publication).

Due to their incredibly cheap monthly subscription fees and above-average library sizes, Argentina, the Philippines, and India are the most cost-effective countries to stream Prime Video. With the average library size being 3,814 titles, Argentinians and Filipinos are getting access to far more, with total library sizes of 5,697 and 6,424, respectively.

However, the fourth most cost-effective country, New Zealand, arguably gives you even more for your money–as we have seen. Despite being slightly more expensive on a cost-per-title basis ($0.00049), the fact it has 2.5 times more titles than average and a moderate subscription fee of $5.03 means New Zealanders are getting a great deal from their Prime Video subscription.

Are other countries with large libraries getting a good deal?

Not always. Ireland has the second-largest library, with 10,027 titles. But, thanks to its recent price hike, users here are paying more than average for their Prime Video subscription (£8.99 or $10.83). This makes its cost per title $0.00108, placing it in 27th place for cost-effectiveness. It’s a similar story in the US, too. Despite having the third-biggest library (9,912 titles), an above-average fee of $8.99 creates a cost per title of $0.00091 and makes the US the 16th most cost-effective place for a Prime Video subscription.

Other countries with more than 9,000 titles in their libraries are South Africa, Australia, and the UK. South Africans pay just $4.71 for over 9,400 titles, and Australians pay $4.86 for 9,200 titles. These cheap monthly costs and great libraries see them taking 5th and 6th place for cost-effectiveness across all countries, respectively. But, despite its reasonably large library size (9,073 titles in total), the UK’s recent price hike means it plummets through the rankings for cost-effectiveness. It goes from being the most cost-effective country in our previous study to the 30th most cost-effective country today.

TIP: You can securely access your usual Prime Video catalog from different countries when traveling abroad by using a VPN. However, not all VPNs work with all Prime Video country catalogs. We have recently tried and tested the best VPNs to watch Prime Video from anywhere.

As we have seen, Argentina, the Philippines, India, and New Zealand enjoy the most cost-effective prices for an Amazon Prime Video subscription.

At the other end of the scale are ten European countries, each with a cost per month of $6.09, and library sizes that are below 900 titles. These well-below-average libraries mean these European countries are paying $0.00681 to $0.00927 per title–which is at least three times more than the average of $0.00266.

The cheapest places to get Amazon Prime Video

While Argentina, the Philippines, India, and New Zealand were the most efficient on a cost-per-title basis, these countries don’t have the lowest monthly cost for a subscription. Turkey has the cheapest Prime Video subscription cost by far, with a price of just $0.44 or TL7.90. Even with its significantly below-average library size of 735 titles, this makes Turkey the seventh-most cost-effective place for a subscription based on its cost per title of $0.00060. However, users here will be sacrificing library quality to get a bargain price.

At three times as much as Turkey’s price, Egypt is the second-cheapest place to have a Prime Video subscription. With a monthly fee of $1.52 (EGP29) and a slightly larger library size of 1,184, Egypt has a cost per title of $0.00128, coming 31st in the cost-per-title rankings.

Singapore ($2.17), India ($2.25), and Hungary ($2.25) follow Egypt, but, as we’ve already seen, it’s India that gives users the best value thanks to its above-average library of 4,171 titles. With a meager 1,202 and 802 titles available in Singapore and Hungary respectively, users here may feel they’re not getting the best deal available.

The most expensive places to get Amazon Prime Video

On a cost-per-month basis, Gibraltar, the UK, Ireland, and Switzerland all cost more than $10 a month and rank at the bottom of the table. The UK, Gibraltar, and Ireland’s fees are $10.83, and Switzerland’s is $10.50, which means they’re paying 20 times Turkey’s monthly subscription price.

How expensive is Amazon Prime Video relative to average income?

In order to gain some understanding of where Prime Video may seem more expensive, we’ve compared each country’s monthly fee in relation to the average monthly income.

How does Amazon Prime Video compare to Netflix for the total cost per title?

Earlier this year, we released which countries pay the most for Netflix. If we look at the cost per title for both platforms– which countries are paying more or less for each streaming service?

If we compare each country’s cost per title on Prime Video and Netflix, we can see that some countries are getting a raw deal on both platforms. Croatia, in particular, is hit with high cost-per-title prices on both platforms. And so are its other central, northeastern, and southeastern European neighbors. But while Switzerland and Denmark join Croatia as the least cost-effective places for Netflix subscriptions, they do get a better deal when it comes to Prime Video.

It also appears that India, Turkey, and Argentina enjoy great cost-effectiveness across both platforms. Equally, some countries appear to get more for their money on one platform than another.

How does Amazon Prime Video compare to Hulu for the total cost per title?

It should be noted that Hulu is only available in two countries: the US and Japan. In the US, the cost per Hulu title is $0.00234, while Hulu users in Japan pay $0.00641 per title (173 percent more) yet have access to far fewer titles.

In contrast, the sheer scale of the US Prime Video library means users pay just $0.00045 per title, 420 percent less than Hulu users in the US.

Want to know more? check out our Netflix vs Amazon vs Hulu vs Disney+ article for the definitive answer on which platform is the best value for money.

Can you get Amazon Prime Video for free?

Unfortunately, Amazon Prime Video is not available for free. However, if you are an Amazon Prime Member, you can access many movies and TV shows with your membership. Additionally, new releases and classic favorites are available for rent or purchase. There are also limited-time promotional offers that provide discounted or extended trials of the service.

For those looking to watch Amazon Prime Video without incurring a charge, you can take advantage of the 30-day free trial available when signing up for an Amazon Prime membership. If you choose not to continue with the service after the trial period, simply cancel your subscription before the end of your trial to avoid being charged.