5 Best VPNs for Nigeria to bypass censorship in 2020

We take a look at the best VPNs for Nigeria. Whether it is avoiding internet censorship, accessing blocked content and apps or browsing the web safely and privately a VPN can help. We'll round up the best options based on security, speed, unblocking capabilities and more. We'll also look at how suitable free VPNs are.
Mark Gill TECH JOURNALIST, VPN AND PRIVACY SPECIALIST 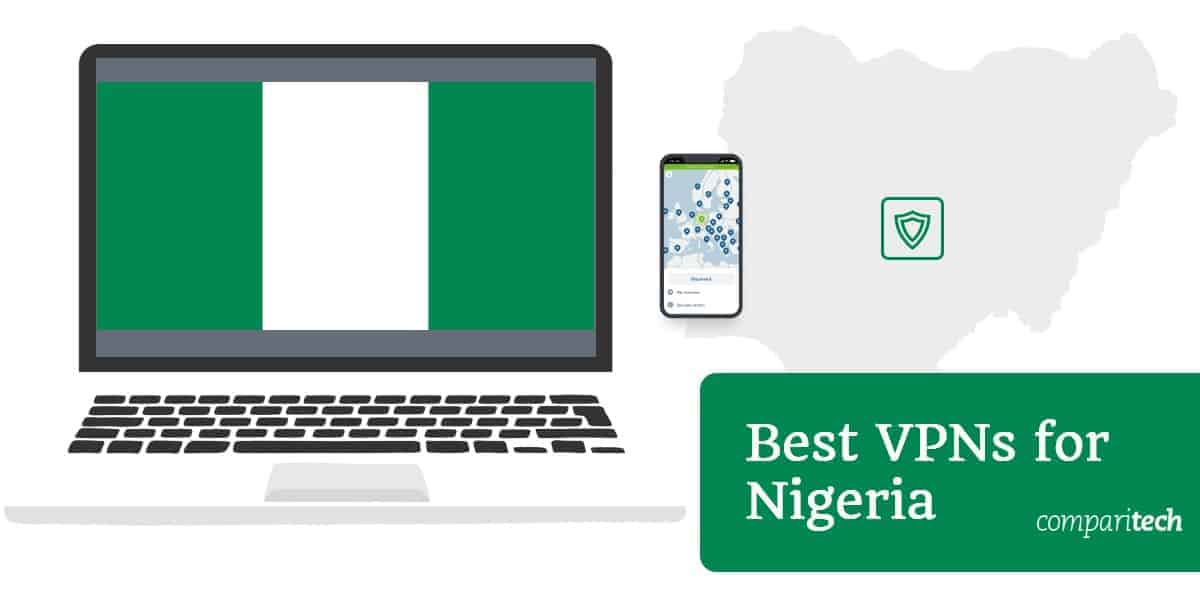 Every device that browses the web has an IP address. This serves to identify the host or network and the approximate location. A VPN can protect your true IP address from being leaked, thus serving to disguise your location. Short for “virtual private network”, a VPN does this by encrypting your device’s web traffic and routing it through one of its servers.

It’s strongly recommended that you use a VPN in Nigeria for a number of reasons. In particular, using a quality paid VPN can improve online freedom without fear of being monitored by the state. Furthermore, a total of 21 sites were blocked in Nigeria in 2017, including the independent news outlet Naij.com. You’ll be able to unblock these by connecting to a VPN server located outside of Nigeria.

If you don’t want to wait any longer to find out the best VPNs for Nigeria in 2018, here’s a quick summary (but be sure to read on to find out more about each VPN):

There are many VPNs available which makes finding a VPN easy. However, it’s choosing the right VPN that’s the tricky part. We aim to take the difficulty out of the process by providing you with our findings. We’ve searched high and low to find the best VPN for Nigeria in 2019. In order to do this, we narrowed down the options to those that met the following criteria:

How to use a VPN in Nigeria

No matter whether you’re in Nigeria or any other country, the process of using a VPN is the same. Here’s what you should do if you want to use a VPN in Nigeria:

ExpressVPN is the best VPN for Nigeria for a number of reasons. A VPN capable of unblocking most geo-restricted content you’re likely to come across, it’s also highly rated for its excellent security offering. ExpressVPN lets you unblock anything from Netflix to ESPN. This is a VPN provider with over 2,000 servers across 94 countries. The servers we’ve tested provided high speeds, which made streaming 1080p content very easy thanks to the unlimited bandwidth and no throttling.

ExpressVPN boasts an extensive selection of apps that includes Linux and routers as well as browser extensions. ExpressVPN apps are among the more user-friendly VPN apps we’ve used, making this VPN perfect for beginners. Even if you do encounter an issue, you can always contact ExpressVPN’s very helpful support, which is available 24/7 via a live chat feature.

While performance and usability are very important in a VPN, so too is the security it provides. This is particularly the case in countries such as Nigeria where online freedom is somewhat limited. You can have online anonymity thanks to ExpressVPN’s security features, which include 256-bit AES encryption, DNS leak protection and a kill switch. Based in the British Virgin Islands, Express VPN isn’t subject to data retention laws and keeps no identifying logs of its users.

BEST VPN FOR NIGERIA: ExpressVPN is our top recommendation. Unblocks most geo-restricted content including Netflix. Has fast speeds for streaming, strong security and excellent 24/7 support.

NordVPN is one of the biggest VPNs on the market with a network exceeding 5,000 servers. These servers are situated in 62 countries worldwide, allowing you to unblock content in the United States, UK, Japan and more. Having such a high number of servers means there’s less strain on each, improving speed and stability. NordVPN is excellent at unblocking region restricted content. This includes streaming services such as Netflix, HBO Go, Hulu and BBC iPlayer. Download speeds were particularly fast and our streaming tests didn’t involve buffering or lag.

Quick and easy to use, NordVPN apps let you search by country or by specialty server. Options available are Dedicated IP, P2P, Onion Over VPN and Double VPN. Each NordVPN server in the list details the server load percentage (the lower the percentage, the faster the server will be). NordVPN’s security is up there with the best. Referring to itself as a “100% anonymous VPN”, it’s based in Panama, outside of EU and US jurisdiction. Indeed, it has a strict no logs policy as well as 256-bit AES encryption, DNS leak protection and kill switch.

NordVPN apps can be downloaded for Windows, Mac, Android, iOS and Linux. There’s also an app available for Android TV and browser extensions for Chrome and Firefox.

CyberGhost is a VPN service that not only offers fast speeds for streaming but also strong security to protect your online anonymity. This VPN provider’s network consists of more than 3,000 servers in 60 countries, some of which are located in Kenya and South Africa. With unlimited bandwidth and traffic, CyberGhost’s performance is very good and our streaming of US Netflix and Amazon Prime Video was smooth with no buffering.

We think that CyberGhost is a great value VPN, particularly considering you can have up to seven simultaneous connections. Live chat support is available, though you’re unlikely to encounter many problems; the CyberGhost apps are straightforward and responsive. Selecting a server and activating features such as an ad-blocker or data compression takes seconds. Overall, CyberGhost is a secure VPN to use in Nigeria since it uses 256-bit AES encryption, DNS and IP leak protection and automatic kill switch. This VPN provider is based in Romania and has a no logs policy.

CyberGhost apps are available for Windows, Mac, Android and iOS. This VPN also offers apps for Amazon TV and Fire Stick. Linux and routers can be set up manually.

IPVanish is a US-based VPN service that is particularly popular with Kodi users. It has a rapidly growing network of over 1,100 servers in more than 60 countries. You can use this VPN on as many as 10 devices with a single account. Since IPVanish offers apps for all major platforms, a family can easily secure all of their internet-connected devices. We used IPVanish to unblock Amazon Prime Video, BBC iPlayer and HBO Now and found speeds to be fast and consistent.

If you’re looking for a secure VPN to use in Nigeria, IPVanish ticks that box. It uses strong 256-bit AES encryption and has DNS and IPv6 leak protection built in. Aside from this, a kill switch cuts your internet connection when the VPN is disconnected, preventing an accidental leak of your data. What’s more, IPVanish doesn’t keep any traffic logs.

IPVanish apps can be installed on Windows, Mac, Android and iOS. There’s also an app for Amazon Fire TV, but Linux and routers require manual configuration.

PERFECT FOR FAMILIES: IPVanish has fast and consistent speeds. Ideal for families thanks to the option of securing up to 10 devices simultaneously.

PrivateVPN is a smaller VPN provider with less than 100 servers. However, PrivateVPN’s server network is growing and servers are located in some 75 countries worldwide. If you’re coming across geo-restricted content in Nigeria, PrivateVPN can help. This VPN is excellent at unblocking websites, particularly popular streaming sites such as Netflix, Amazon Prime Video and BBC iPlayer. It’s possible to stream videos in HD thanks to the very fast speeds PrivateVPN offers.

Streaming with PrivateVPN is seamless and we didn’t encounter any buffering. Connecting to servers is extremely quick while the consistency of the connection was impressive. PrivateVPN lets you connect up to 6 devices simultaneously, all of which receive unique IP addresses. Based in Sweden, PrivateVPN states that it has a zero data logging policy. It uses 256-bit AES encryption, DNS and lPv6 leak protection and a built-in kill switch. You also have the option of paying in bitcoin for increased privacy.

PrivateVPN offers apps for Windows and Mac as well as for mobile on Android and iOS. Manual configuration is necessary for Linux and routers.

IDEAL FOR STREAMING: PrivateVPN has fast servers which makes it ideal for streaming Netflix, Amazon Prime Video and BBC iPlayer.

Why should I use a VPN in Nigeria?

It’s completely legal to use a VPN in Nigeria. In fact, we strongly advise it. Not only is internet censorship an issue in Nigeria, but you will also encounter geo-restricted websites. This is often the case with popular streaming services such as Netflix and Amazon Prime Video. The best VPNs can unblock these geo-restrictions.

More importantly, the best VPNs for Nigeria can provide you with greater online security. The Nigerian government has been known to arrest internet users (particularly bloggers and journalists) based on their online activities, many of whom were charged for “cyberstalking”.

National elections are due to take place in Nigeria in 2019 and there is some concern, particularly from opposition parties, that the government will attempt to crack down on any online dissent. These concerns were heightened in March 2018 when the Senate proposed a hate speech bill that would prove limiting to freedom of speech in Nigeria. By using a VPN, you can ensure your privacy and use the internet freely.

Can I use a free VPN in Nigeria?

Yes, you can use a free VPN in Nigeria. However, doing so does come with some risk. It’s worth mentioning that free VPNs are not as secure. Many of them lack vital security features which means that your data can still be compromised. While Nigeria has seen a sharp increase in public WiFi hotspots, it also brings the danger of hackers and malware. Without strong encryption and a kill switch to cut your traffic should the VPN connection drop, your personal information will be at risk.

Believe it or not, many free VPNs contain malware. This is often in the form of spam ads that are as annoying and irrelevant as they are dangerous. Some free VPNs don’t have a no-logs policy. This for us is a dealbreaker since your personal information should remain private to you. If a free VPN is collecting your data and online activity, they may well pass it on to third parties for a profit.

Aside from security issues, free VPNs tend to suffer from poor performance. That’s because they have too many users and too few servers to meet demand. Bandwidth caps are common with free VPNs and as such, you’ll find it difficult to stream without extensive buffering and lag. Overall, free VPNs tend to be a frustrating experience that aren’t worth your time and effort.