Best VPNs for Egypt in 2022 – Unblock Skype, WhatsApp and more

Looking for the best VPN to use whilst in Egypt? We reveal the top VPNs for Egypt so you can unblock websites, social media, and apps from home including Skype, Facebook Messenger, FaceTime, and WhatsApp.
Paul Bischoff TECH WRITER, PRIVACY ADVOCATE AND VPN EXPERT 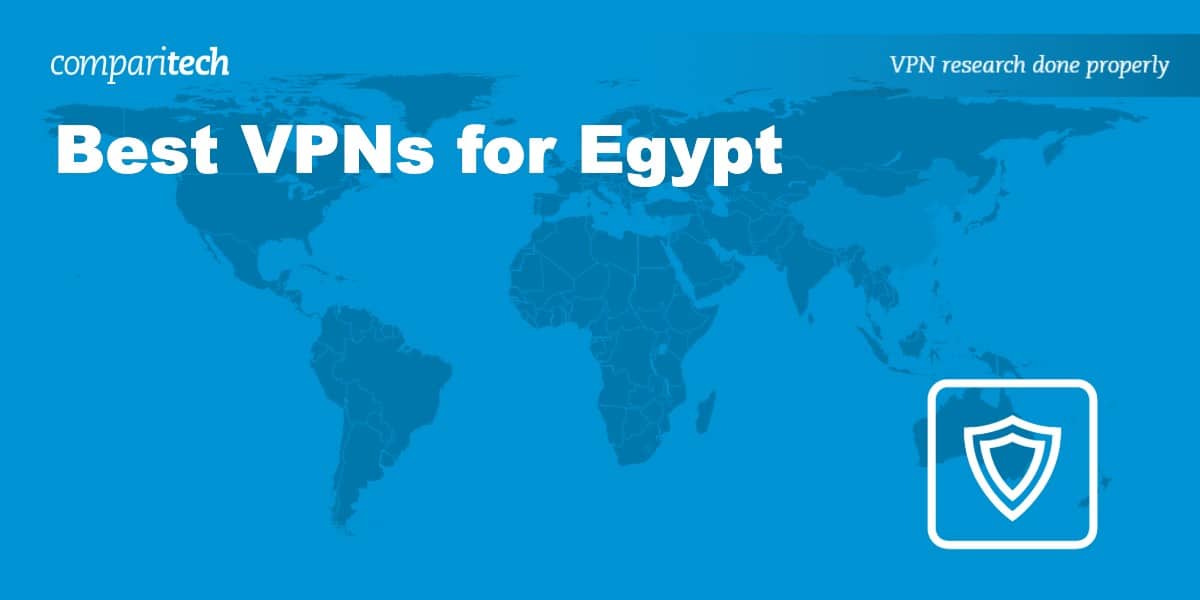 Hundred of blogs, websites, and apps are blocked by the government in Egypt. To bypass these blocks you will need the help of a VPN for Egypt. A VPN (Virtual Private Network) works by hiding your IP address and replacing it with one from a country of your choosing. This allows you to access your home services which are blocked in Egypt, such as Skype, WhatsApp, and Facebook.

We get into a lot of detail about the VPN providers we feature below, but if you only have time for a quick summary take a look at the shortlist below.

NordVPN is offering a fully-featured risk-free 30-day trial if you sign up at this page. You can use the VPN rated #1 for Egypt with no restrictions for a month—great if you're going on a trip and want to browse securely and unblock your favorite platforms.

The best VPNs for Egypt

With all of that in mind, we’ve made a list of the best VPNs for Egypt based on the following criteria:

IMPORTANT: VPNs are legal in Egypt, but many of their servers and websites are blocked. We recommend you sign up and download the VPN of your choice before arriving in Egypt if possible.

NordVPN is our top choice for Egypt. This Panama-based provider offers the fastest speeds we’ve seen, excellent security, and several features specialized for privacy and anonymity. These include Tor over VPN and double VPN connections. NordVPN offers fantastic value, allowing up to six connections at the same time. It can access US Netflix and Hulu, both in a browser and on the respective mobile apps. The company keeps zero logs on its users.

Apps are available for Windows, Linux, macOS, iOS, and Android.

BEST VPN FOR EGYPT:NordVPN is our top pick. Solid security and privacy and works reliably in Egypt. Use up to 6 devices at once with great connection speeds. 30-day money-back guarantee for a risk-free deal.

Surfshark is a great low-cost VPN with an expanding server network and a range of security features. aside from military-grade encryption, you get a kill switch, leak protection, automatic wifi protection, and multi-hop servers. Surfshark keeps no logs whatsoever. One of the biggest selling points of this service is you can connect as many devices as you like under a single subscription, making this an exceptional deal. Surfshark is highly adept at unblocking and can grant you access to the likes of Netflix and Amazon Prime Video from anywhere.

A special NoBorders mode will help you bypass Egypt blocks.

Apps can be downloaded for Linux, Windows, macOS, iOS, and Android. Some routers can be configured manually.

BEST BUDGET ALTERNATIVE:Surfshark is a solid low-cost provider. Boasts a growing network of servers, strong security features, and a no-logs policy. No connection limit. Plans include a 30-day money-back guarantee.

ExpressVPN makes intuitive, easy-to-use apps. But don’t let the simple design fool you. The provider maintains the highest standards when it comes to encryption and authentication. ExpressVPN keeps no traffic logs and is based in the British Virgin Islands, which has no mandatory data retention laws. A single subscription nets you five simultaneous connections. ExpressVPN is one of the very few VPNs consistently capable of accessing US Netflix, Hulu, and other streaming content from abroad.

GOOD ALL-ROUNDER:ExpressVPN holds its own. A fast and reliable choice that confidently unblocks most restricted sites and content. Great privacy features and keeps no logs. Pricey but you get what you pay for. Try it risk-free with the 30-day money-back guarantee.

IPVanish owns, rather than rents, all of the servers on its global VPN network, which means customers are ensured a sturdy connection for VoIP calls and streaming. By default, all connections use the OpenVPN protocol, uncrackable military-grade encryption, and perfect forward secrecy. The company keeps zero logs. Customers can connect up to five simultaneous devices on a single account.

The apps include an optional obfuscation feature that disguises your VPN connection to look like normal, unencrypted internet traffic.

Apps are available for Windows, macOS, iOS, and Android. IPVanish is also a favorite among Kodi users due to its remote control-friendly design.

EXCELLENT FOR VOIP:IPVanish is a solid choice. Great for unblocking restricted sites and services in Egypt. Own network of super-fast servers and score top marks for privacy and security. A favorite with Kodi users and torrenters. 7-day money-back guarantee.

VyprVPN boasts gold-standard encryption using the OpenVPN protocol, but users can also avail of its proprietary Chameleon protocol for added protection and unblocking capability. VyprVPN’s parent company, Golden Frog, owns all of its own server infrastructure around the world and even writes the software used on those servers itself. That gives the company maximum control over privacy and also means it can promise top-notch speeds around the clock. We’ve also successfully watched US Netflix and other streaming sources from abroad using VyprVPN.

Apps are available for Windows, macOS, iOS, and Android.

UNLIMITED DATA USAGE:VyprVPN is user friendly. Good speeds and uptime as all servers are owned by VyprVPN. Great privacy and security. Not the cheapest option. 30-day money-back guarantee.

PrivateVPN is a young up-and-coming VPN making a big splash despite its relatively small server network. Support staff confirmed PrivateVPN does work in Egypt out of the box for most users. In some cases, however, subscribers may need to configure an additional proxy using Shadowsocks, an internet censorship circumvention tool often used in China. PrivateVPN’s live chat support can guide you through the process or even remotely take control of your PC or Macbook to set it up on your behalf (with your permission, of course).

Apps are available for Windows, macOS, iOS, and Android.

GREAT FOR SPEED:PrivateVPN is consistently reliable. Good for general purpose use and Torrenting. Speeds were surprisingly good at this end of the market. Could do with having more servers and lacks 24/7 support. 30-day money-back guarantee.

At Comparitech we use a proprietary VPN testing methodology that we have been refining over many years, and below we have included the primary things we looked for in compiling our list of the best VPNs for Egypt:

All of the VPNs above require a monthly subscription (although some offer a money-back guarantee), but we recommend them for a reason. They are obligated to protect your privacy and provide the highest level of service possible. Doing otherwise is not in the best business interests.

Free VPNs often do not have your best interests at heart. They often use obsolete encryption suites, or even worse, no encryption at all. Some even inject advertisements or cookies into your web browser, making even less private than when you started off. The handful of free VPNs that don’t engage in these shady practices typically have data caps or bandwidth limits, making them unsuitable for VoIP calling and video streaming.

For these reasons, we strongly advise you to go with a paid VPN service.

How to unblock websites in Egypt using a VPN

Once you’ve signed up for an account with a VPN provider, unblocking the app or website of your choice is easy.

Here’s how to unblock WhatsApp, Skype and more with a VPN in Egypt:

If you’re still experiencing issues try clearing your cache and cookies then reloading the page.

See also: How to get an Egyptian IP address

Why use a VPN in Egypt?

In recent months, the Egyptian government has ordered ISPs to block hundreds of blogs and news sites. About a dozen people have been arrested this year for publishing fake news, many of whom are journalists and dissidents.

A VPN can bypass these blocks and help protect your online identity. There are no laws in Egypt prohibiting the use of VPNs as of this time.

In July 2018, Egypt’s parliament passed a law giving the Egyptian government the power to block social media accounts and punish journalist who publish fake news, according to Reuters. Any blog or social media account with more than 5,000 followers can be prosecuted for publishing fake news or incitement to break the law.

Furthermore, the bill prohibits anyone from making a new website without a license from the Supreme Council. The Council can block or suspend existing websites and impose fines on editors.

An Egypt VPN can bypass any such ban and allow you to access blocked websites. If you’re a journalist or publisher, a VPN can mask your real IP address to make it look as though you’re in another country. Read more in our guide to anonymous blogging.

In August 2017, Egypt began blocking voice and video calls made over VoIP and messaging apps including Skype, Facebook Messenger, FaceTime, and WhatsApp, according to Quartz. The government effectively shut down access to those apps on the heels of a terrorist that killed 47 people in two churches. Egypt’s emergency law allows authorities to monitor and shutter online communication and media with no judicial oversight.

Text messages over these apps still works, according to reports, but there’s no telling how long the block on voice and video will last. Some critics speculate that national security is not the only motivation; Egypt’s telcos have complained to regulators about over-the-top calling apps that eat into their profits by using the internet in lieu of their legacy phone networks.

A VPN will unblock online voice and video calls.

Other attacks on internet freedom

Whatever the reason, the future isn’t bright for Egypt’s internet. The government has incrementally tightened its grip on the web. Other than this latest act of censorship, Egypt’s other notable actions include: