How to watch Monarch season 1 online from anywhere

Traveling abroad but not sure how or where you can watch Monarch season 1 online? We cover the official sources for streaming Monarch and explain how a VPN lets you watch from anywhere.
Mark Gill TECH JOURNALIST, VPN AND PRIVACY SPECIALIST 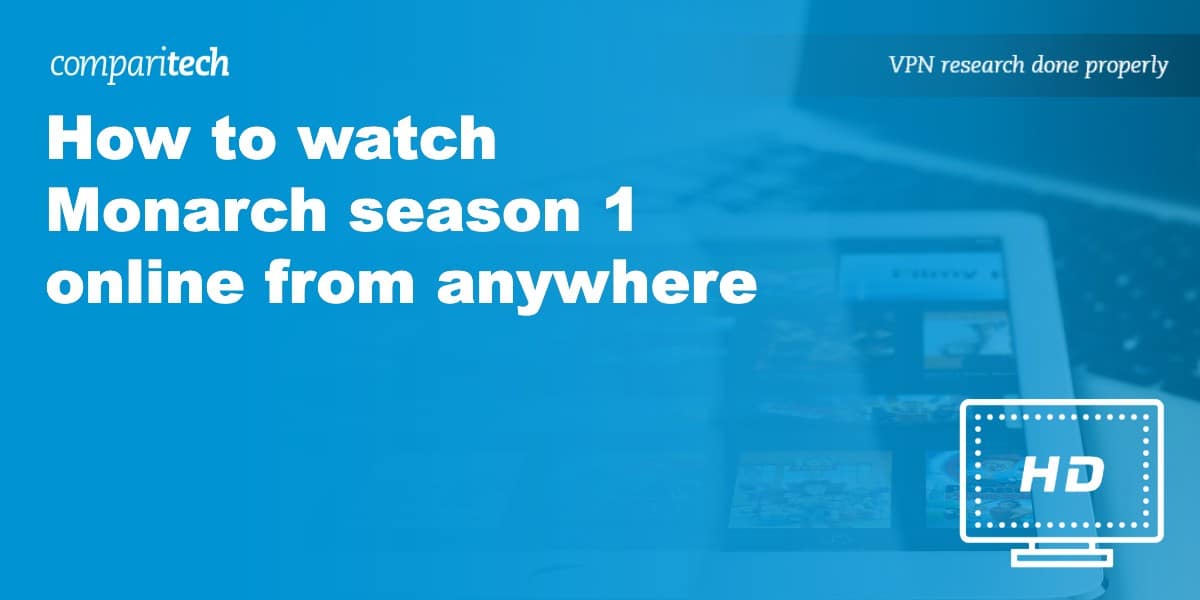 It’s finally here! Monarch season 1 is set to premiere on Sunday, September 11 at 8 PM EST (5 PM PST). The upcoming musical drama series was originally scheduled to premiere in January 2022 but was delayed due to issues stemming from the Covid-19 pandemic. Going on vacation and don’t want to miss out? While Monarch season 1 may be region-locked in your location, you can watch online from anywhere by using a Virtual Private Network (VPN).

We’ll only be recommending official sources for streaming Monarch season 1. The reason for this is that unlicensed streams are just too unreliable. Some will be taken offline without warning for violating copyright. Even if they’re not, the low resolution and lag are likely to make for a frustrating streaming experience. You can save a lot of time and watch Monarch season 1 in the highest quality by sticking with the official sources listed further below.

Note that Monarch season 1 is only streaming on geo-blocked platforms. If you’re traveling overseas, you’ll need a VPN to watch via your regular home streaming service.

How to watch Monarch season 1 online with a VPN

When you connect to a VPN server, you’re assigned a new, temporary IP address. This makes it appear as if you’re streaming from another location. As a result, you can bypass the geographic restrictions of streaming platforms showing Monarch season 1.

Here’s how to stream Monarch season 1from abroad using a VPN:

Monarch season 1 episodes will air live. To avoid missing out due to a technical hiccup, it’s a good idea to test your VPN with Fox (or alternative platform) ahead of time. If you do have an issue, you can contact your VPN’s customer support for further assistance.

NordVPN is offering a fully featured risk-free 30-day trial if you sign up at this page. You can use the VPN rated #1 for Fox with no restrictions for a month – enough time to watch the first few episodes of Monarch season 1.

How to watch Monarch season 1 online in the US

You can watch Monarch season 1 when it premieres on Fox on Sunday, September 11. However, subsequent episodes will air on Tuesdays at 9 p.m. starting September 20. Monarch is easy enough to watch if you already have a cable TV subscription that includes Fox. In this case, you’d simply sign in to the Fox website or Fox Now app via your TV provider. The content should then be available to stream at no extra cost.

Fortunately, there are a few options for streaming Fox cable-free. To do this, you’ll need to sign up with one of the following TV streaming services: FuboTV ($69.99 USD/month), Hulu ($69.99/month and includes Disney+ and ESPN+), Sling TV ($35/month), or YouTube TV ($64.99/month). Free trials are also available, making it a great way to watch the first few episodes of Monarch for free.

Fox and third party TV streaming services such as Hulu and YouTube TV are region-locked and only available in the US. That’s why you’ll need to be connected to a VPN server in the US to watch from abroad. Still need a VPN? Remember that NordVPN has a 30-day money-back guarantee. You can try it out with Fox risk-free.

Where else can I watch Monarch season 1 online?

As of yet, there’s no news regarding the UK premiere of Monarch season 1. The good news is that it will be available to watch in Canada as well as Australia:

Monarch is also coming to Canada and will be available to watch on Global TV. It premieres on Wednesday, September 14, just three days after the US. To watch episodes live, you’ll need to be signed in with your cable TV provider. If you don’t mind waiting just one extra day, you’ll be able to watch new episodes on-demand without having to sign in (each episode is unlocked for the first seven days after airing).

Due to the fact that Global TV is geo-blocked and only available in Canada, a VPN and Canadian IP address is required to stream it from overseas.

In Australia, Monarch season 1 will premiere on the Paramount Plus streaming service on Tuesday, September 13. A subscription costs just $8.99 AUD a month and there’s also a seven-day free trial for new customers. While Paramount+ is available in many countries, content varies by location. As such, you need to connect to a VPN server in Australia for an Australian IP address in order to watch Monarch.

What should I know about Monarch season 1?

Monarch follows a country music family called the Romans. Together, Albie Roman and Dottie Roman have built a music dynasty. As their daughter Nickie looks to take the reins and protect this dynasty while furthering her own musical ambitions, it soon becomes clear that the origins of the family’s success are not what they seem. As we hear in the official season 1 trailer, “heavy is the head that wears the crown”. Indeed, inheriting the family’s legacy also means inheriting its secrets.

Who is in the cast of Monarch season 1?