Can’t wait to stream the new season of Top Chef? Read on to find out where you can watch Top Chef season 17 online. We’ll also tell you how you can use a VPN to watch while traveling abroad (outside the US).
Mark Gill TECH JOURNALIST, VPN AND PRIVACY SPECIALIST 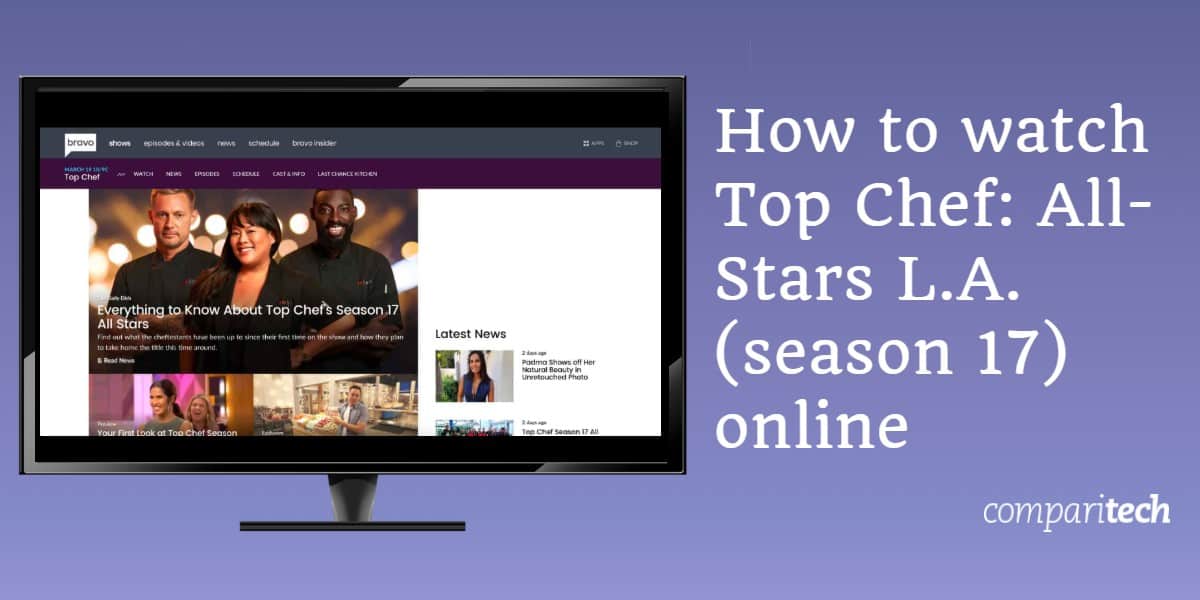 Top Chef: All-Stars L.A. will premiere on Friday, March 20, at 10 PM EST (7 PM PST). Top Chef season 17 will feature 15 returning contestants, all of whom are competing for a $250,000 prize. If you’re going to be abroad (outside the US) when the show is scheduled to broadcast, you’ll need to use a Virtual Private Network (VPN) in order to watch it live online.

As this is a popular reality competition series, we can expect unauthorized streams. However, we’re only recommending official sources for watching Top Chef season 17. Unlicensed streams are usually of inferior quality and may be taken offline for violating copyright. We’ll show you the best ways to live stream Top Chef season 17 so you don’t need to miss out on any of the fun.

Note that Top Chef season 17 will only air on geo-restricted platforms. As such, you’ll need a VPN to watch abroad via your usual home streaming services.

How to watch Top Chef season 17 online with a VPN

With a VPN, you can connect to a server in another country and unblock content that would otherwise be unavailable in your location. Another advantage is that your internet traffic is encrypted, improving your online security. By connecting to a VPN server in the US, you’ll have a US IP address. This tricks websites and services into thinking you’re located in the US, allowing you to watch Top Chef: All-Stars L.A. online from abroad.

Here’s how to watch Top Chef season 17 online from anywhere:

Episodes of Top Chef season 17. will air live. To avoid missing out, we recommend you test your VPN with Bravo TV in advance. If you encounter any issues, you can then contact your VPN’s customer support for technical assistance.

How to watch Top Chef season 17 on US TV

Bravo TV and all of the above streaming services are only available in the US. However, you can access their region-locked content by connecting to a US server. If you’re not sure which VPN to use, you may wish to consider ExpressVPN which comes with a 30-day money-back guarantee. This means you can try it risk-free and simply request a full refund within the 30-day period if it doesn’t meet expectations.

Where else can I watch Top Chef season 17?

The success of Top Chef has seen the birth of numerous spin-offs as well as international versions of the show. However, it’s also possible to watch Top Chef season 17 in Canada. Read on to find out more.

Viewers in Canada can watch Top Chef season 17 on Food Network Canada. According to the channel’s TV schedule, the first episode of season 17 will air at 3 AM EST. You can watch via traditional TV (offline) via various cable TV providers. The only way to stream Food Network online is via StackTV which is available live and on-demand through Amazon Prime Video Channels. A Canadian IP address is required to watch StackTV which you can obtain by connecting to a server in Canada via a VPN.

What can we expect from Top Chef season 17?

Top Chef: All-Stars L.A. will be the 17th season of Top Chef, which first premiered in 2006 on Bravo. Like the second season, Season 17 was filmed in Los Angeles. However, the season finale was filmed in Italy, making it the first time the show has traveled to Europe. As an all-stars edition, Top Chef: All-Stars L.A. is made up of 15 former Top Chef contestants with the winner receiving a cash prize of $250,000 USD. Padma Lakshmi, Tom Colicchio, and Gail Simmons are all returning as judges.

Who are the all-star contestants in Top Chef: All-Stars L.A.?

Top Chef: All-Stars L.A. will feature 15 past Top Chef contestants competing to be this season’s top chef. Here’s a full list of the contestants appearing in season 17: