6 Best VPNs to watch Bravo online outside the US

Bravo TV content is region-locked and only available in the United States. Fortunately, there’s a solution! Below, you’ll find out how to watch Bravo online from abroad (outside the US) by using a VPN.
Mark Gill TECH JOURNALIST, VPN AND PRIVACY SPECIALIST 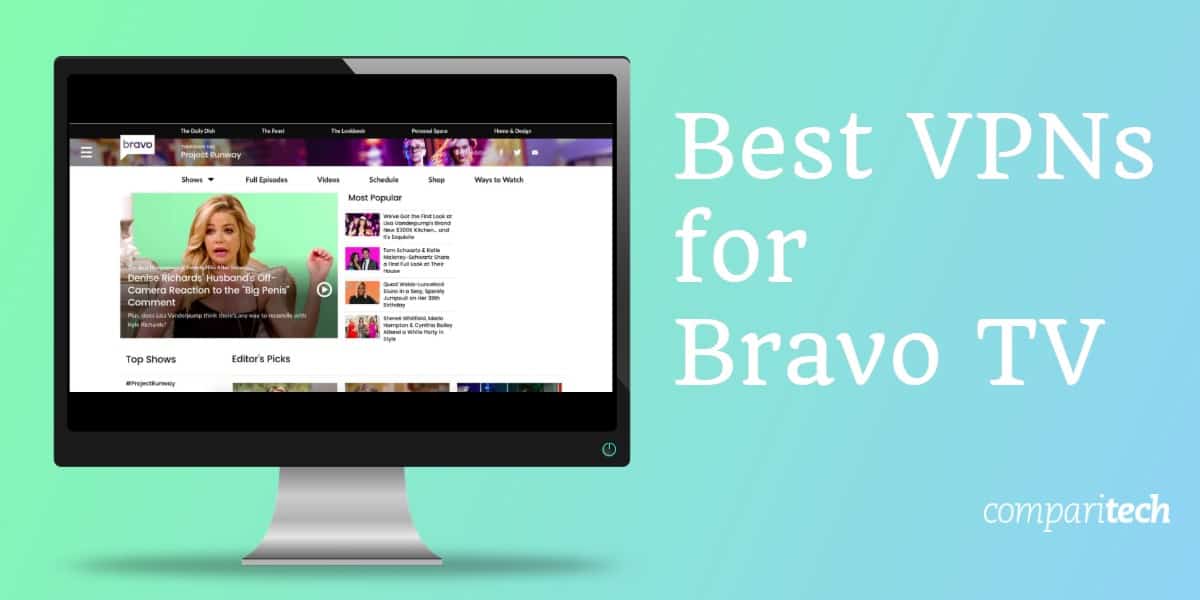 When you try to watch Bravo online outside the US, you’ll probably encounter the following message:

“Sorry, this video is not available from your location”. 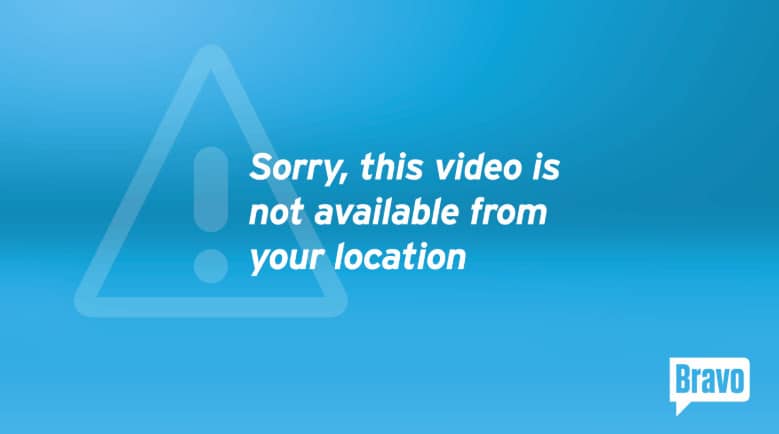 A Virtual Private Network, or VPN, encrypts your internet traffic and routes it through one of its own servers elsewhere in the world, giving you a new, country-specific IP address in the process. This means that unblocking Bravo TV abroad is as easy as connecting to a VPN server in the US. In fact, VPNs can unblock more than just Bravo TV in this way; you’ll also be able to use services like Netflix and Amazon Prime Video, even if you’re on the other side of the world.

Short for time? Here’s a quick summary of the best VPNs to watch Bravo online:

Finding the best VPN to watch Bravo shows isn’t easy as there are many VPN services of varying quality on the market. We’ve narrowed down the options by only selecting VPNs that can offer the following:

Here’s our list of the best VPNs for Bravo TV so you can watch it outside the US:

ExpressVPN excels at unblocking geo-locked content such as Bravo TV. This reliable VPN has more than 3,000 servers in 94 countries, including the United States. It can also unblock popular streaming services including Netflix, BBC iPlayer, and HBO Go. Servers are fast and there’s unlimited bandwidth so you should find streaming Bravo TV free from buffering and lag.

This VPN offers a wide range of apps and browser extensions. As such, you should be able to access it on most of your devices. There’s even a smart DNS proxy service called MediaStreamer which lets you unblock geo-restricted content on Apple TV, Amazon Fire TV, and select games consoles and smart TVs. ExpressVPN also has a fast and friendly customer support service which is available 24/7 via live chat and email.

NordVPN is well placed to unblock US websites and services thanks to its 1,700 servers in the country. However, in total, it offers more than 5,000 servers in 60 countries, making it ideal for unblocking content worldwide. This VPN allows you to have up to 6 simultaneous connections, which makes this one of the best value VPNs. Servers are generally fast and this means you should have seamless Bravo TV streaming.

You can use NordVPN via the apps for Windows, Mac, Linux, Android, iOS, and Android TV. There’s also the option of using NordVPN via your web browser with the Chrome and Firefox browser extensions. Routers require manual setup.

BEST FOR THE MONEY:NordVPN stands out as great value. It has 1,700 US servers and works with Bravo TV and Netflix. Excellent apps, 24/7 live chat support, and can be used on up to 6 devices. Uses encryption and has a no-logs policy. 30-day money-back guarantee.

CyberGhost has a growing network of around 3,600 servers, 700 of which are in the US. You can use this VPN to watch Bravo online from abroad or even to unblock Netflix US. The high-speed servers allow for stress-free streaming, even with live 1080p video. Unlimited bandwidth and traffic mean fast torrenting without restriction. Furthermore, CyberGhost lets you have up to 7 simultaneous connections.

This VPN has plenty of features, including an ad-blocker and the option to compress images to save on mobile data. There’s a good selection of apps and browser extensions on offer, as well as 24/7 live support. CyberGhost secures your data with 256-bit AES encryption while also protecting you from DNS, WebRTC, and IPv6 leaks. Further security features include a kill switch and a strict no-logs policy, allowing you to be almost completely anonymous online.

UNLIMITED BANDWIDTH:CyberGhost offers unlimited bandwidth and has hundreds of fast servers across the US. Use it to watch Bravo TV and Netflix US. User-friendly apps and 24/7 live chat support. Connect up to 7 devices. Plans come with a 45-day money-back guarantee.

IPVanish has hundreds of servers located across the US in cities such as Los Angeles and New York. This means you have plenty of choices when it comes to servers for unblocking Bravo TV overseas. In total, IPVanish has around 1,300 servers in 60+ countries worldwide. As such, you’ll be able to use it to unblock geo-restricted content almost anywhere in the world. Notably, this VPN lets you connect up to 10 devices simultaneously, while many other VPNs allow six at most.

The servers are fast and consistent which is ideal for browsing and streaming. This VPN provides live chat customer support as well as apps that are simple to use for beginners. IPVanish offers all of the key security features expected of a secure VPN including 256-bit AES encryption, DNS leak protection, and a kill switch. Better still, this service doesn’t collect any connection or activity logs, which helps protect your online privacy.

CONNECT 10 DEVICES:IPVanish lets you connect up to 10 devices simultaneously. This US-based VPN is great to watch Bravo online. Servers in Los Angeles and New York. Live chat support and protects your privacy with encryption and no-logs policy. 7-day money-back guarantee.

PrivateVPN is one of the fastest VPNs on the market, offering high-speed servers that are ideal for streaming Bravo TV or torrenting safely. Although it has a smaller network of around 100 servers, it does have servers in a number of US cities including New York. One of the best things about this VPN service is that it unblocks a wide range of region-locked platforms. This includes Netflix, Amazon Prime Video, and BBC iPlayer.

You can use PrivateVPN on up to 6 devices simultaneously. What’s more, this VPN is very easy to use with apps for desktop and mobile platforms. meaning you never have to browse unprotected. PrivateVPN is headquartered in Sweden and has a no-logging policy. Your data is protected with 256-bit AES encryption, DNS and IPv6 leak protection, and a kill switch. PrivateVPN offers live chat support and free remote help and installation should you need it.

You can use PrivateVPN via the apps for Windows, Mac, Android, and iOS. However, you’ll need to follow manual setup instructions for Linux and routers.

Surfshark has servers in more than 50 countries, including the US. This allows you to unblock US content such as Bravo TV and Netflix as well as the likes of BBC iPlayer. Overall, this is a fast service for streaming in HD without buffering and lag. It offers excellent 24/7 customer support via live chat and email. What’s more, Surfshark lets you have an unlimited number of simultaneous connections which is great for families with lots of devices.

The Surfshark apps shouldn’t cause any problems as they’re very easy to navigate. They also include a number of interesting features including an ad-blocker and the option to whitelist certain sites and apps, allowing them to bypass the VPN. This is a no-logs service and is based in the British Virgin Islands, a country with no mandatory data-retention laws. Surfshark includes 256-bit AES encryption, DNS leak protection, and a kill switch which prevents your data from being accidentally exposed.

Surfshark provides apps for Windows, Mac, Android, iOS, and Amazon Fire TV/Fire Stick. There are also browser extensions for both Chrome and Firefox. Manual installation is needed for Linux and routers.

FAMILY-FRIENDLY VPN:Surfshark lets you connect an unlimited number of devices which is great for families. Aside from Bravo TV, it unblocks Netflix and Amazon Prime Video. Includes 24/7 live chat support, encryption, and an ad-blocker. 30-day money-back guarantee.

How to use a VPN to watch Bravo TV

You might be surprised to find out just how quick and easy it is to use a VPN to watch Bravo online. All you need to do is follow these simple steps:

How to watch Bravo TV using a VPN

It’s often necessary to clear your cookies after connecting to a VPN server. This ensures that websites forget your previous IP address and location. However, we found this wasn’t necessary in the case of Bravo TV.

Can I use a free VPN with Bravo TV?

Most free VPNs have no trouble unblocking Bravo TV. However, free VPNs struggle when it comes to unblocking streaming services such as Netflix and DAZN. What’s more, free VPNs can be very slow. Performance issues are most noticeable during streaming where you’ll encounter a lot of buffering and lag. This is in part due to the bandwidth throttling of free VPNs as they attempt to manage the many users on their limited number of servers.

One of the main reasons we advise against using free VPNs is that they’re simply not very secure. For starters, many free VPNs don’t secure your data with encryption while others don’t even have a kill switch feature. Any good VPN for Bravo TV should have a no-logs policy but some free VPNs actually log and sell your online activity! For these reasons, free VPNs aren’t worth your time.

What can I watch on Bravo TV?

Bravo TV offers its own original programming, much of which is reality TV. Here are some of the TV shows you can watch on Bravo TV: