True love or true crime? There are a ton of fraudsters out there looking to capitalize on those looking for love. Find out the latest romance scam statistics and facts.
Aimee O'Driscoll VPN AND CYBERSECURITY EXPERT 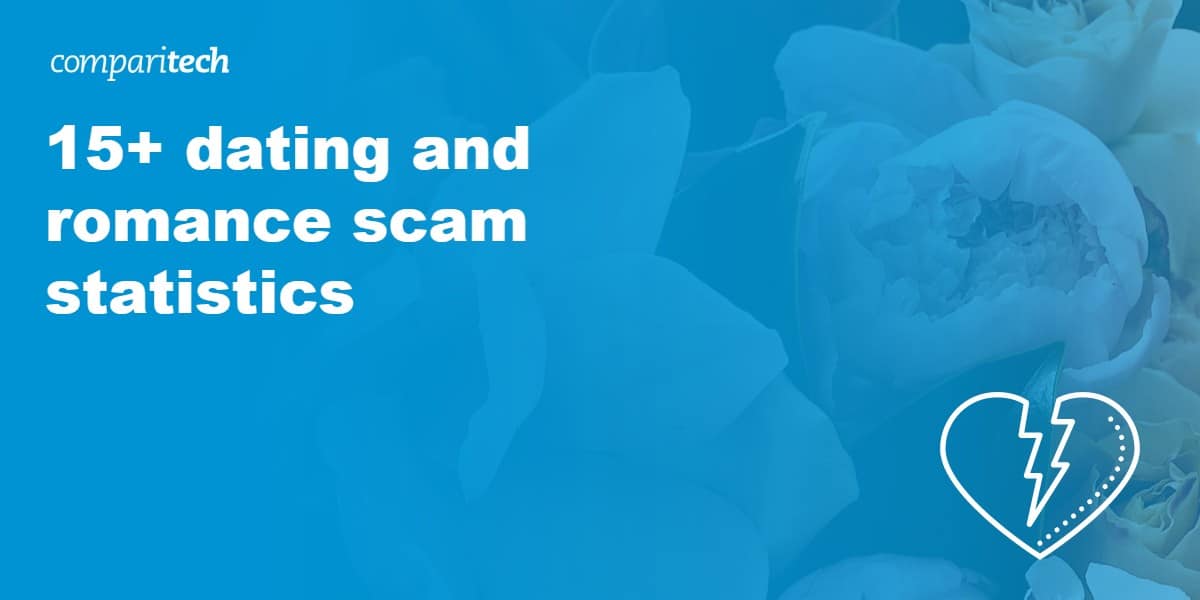 Dating and romance scams are rife both offline and online, with fraudsters posing as love interests to swindle unsuspecting victims out of piles of cash. With more people isolated and lonely during the pandemic, and the internet their major means of communication, we’re seeing an increase in the prevalence of online romance scams. But as our romance scam statistics show, this type of scheme is far from new.

Many victims of dating scams believed something like this could never happen to them, but it’s surprising how convincing criminals can be, especially when it comes to matters of the heart. We revealed how to spot and avoid dating and romance scams in an earlier post, but here, we look at some of the most recent and prominent facts and statistics surrounding this topic. Let’s get started!

Data from the Federal Trade Commission (FTC) shows that in the US, romance scams result in higher losses than any other type of scam. Victims lost $201 million to these types of scams in 2019, which was a whopping 40 percent increase over 2018, and more than a six-fold increase from 2015.

In 2020, reported losses due to romance scams reached a whopping $304 million, which is an increase of 50% from 2019. According to the FTC, gift card romance scams increased by 70% last year alone. In addition, a huge number of victims directly wired money to their scammer. 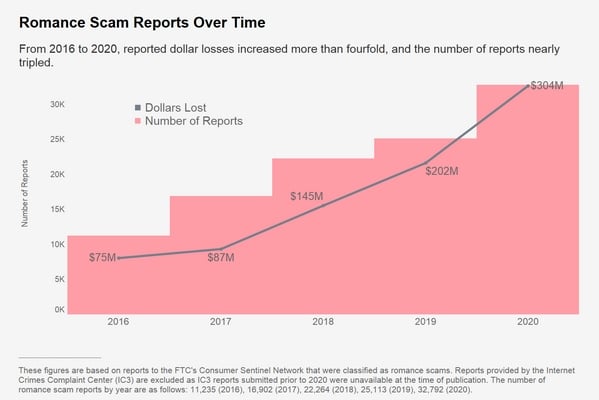 In 2020, the downward trend continued, with the Canadian Anti-Fraud Centre reporting that 620 victims lost more than $18.5 million to predators pretending to be in love. However, the total number of complaints is believed to have reached around 900, meaning that even larger losses may have been suffered.

In 2019, Australians lost a total of $634 million to scams. A significant portion of this ($83 million) involved romance scams, although investment scams caused higher losses ($126 million).

In 2020 and 2021, this horrific trend continued. So far, losses for 2021 have been tallied up to $56 million, but this figure is expected to rise as all the data is collected. It is also believed that all scams are vastly underreported in Australia, with one-third of victims failing to report scam losses.

4. 33% of losses occurred via social media

A chunk of the above Australian scams were reported directly to Scamwatch, an entity run by the Australian Competition and Consumer Commission (ACCC). It received reports of 4,000 romance and dating scams in 2019, with losses totaling $28.6 million AUD. And around one-third of these scams took place via social media.

In 2020, similar figures continued with social media once again reported to be the primary attack vector for romance scams. According to official figures around AU$23 million were stolen via social media in 2020.

Instagram was the most common social network used, representing 8.8 percent of romance scam reports, but Facebook dating schemes resulted in the largest financial impact for victims, representing 7.3 percent of losses.

That said, online dating sites remain the top source of romance scams, accounting for 17 percent of reports. Statistics from 2020 also reveal that those over the age of 55 are most likely to suffer the highest financial losses from romance scams: 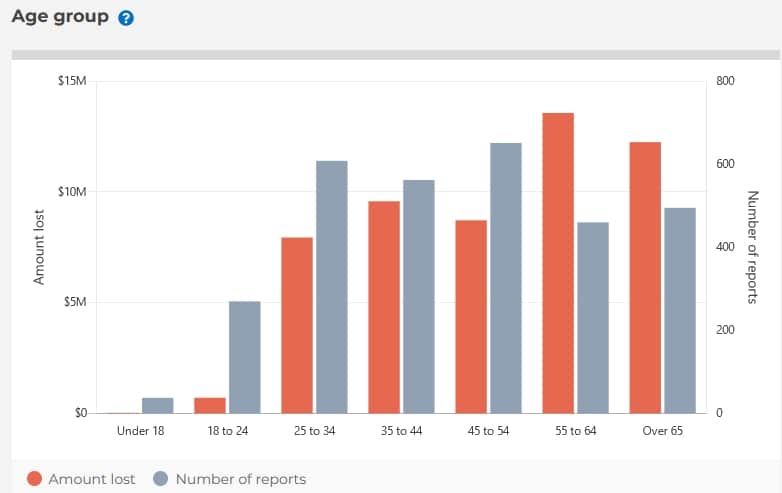 One observation noted by Scamwatch is that romance scammers are increasingly using apps such as Google Hangouts to communicate with victims. Others use online games like Words with Friends and Scrabble to dupe their victims. Some of these appear to be used as a way to reach victims who aren’t actually seeking a relationship. According to ACCC Deputy Chair Delia Rickard:

We’ve seen an increase in reports from people who did not originally seek an online relationship but have been caught up in a dating and romance scam.

These findings were corroborated by the FTC in America, which stated that gift card romance scams increased by 70% in 2020. According to the FTC, victims primarily sent gift cards through the mail, but also provided pin numbers for digital gift cards.

An FTC report focusing on older adults found that romance scams resulted in the largest losses for scam victims over 60. Over $80 million in losses was reported by adults in the 60–79 age group and $3.3 million by over-80s. In 2020, this trend continued with people over 70 suffering the highest individual median losses at $9,475 each.

That said, 2020 also saw a sharp increase in victims between the ages of 20 to 29. According to the FTC this age group reported twice as many romance scams in 2020 when compared to 2019.

As part of its 2018 romance report, the BBB spoke to a company that screens online profiles on behalf of dating companies. It observes 3.5 million profiles each month and finds that on average, 500,000 of them are fake. An expert reported to the BBB that there may be 25,000 scammers online with victims at any given time.

10. Up to 30% of dating scam victims become money mules

A 2019 BBB report details how dating schemes can quickly turn victims into criminals. A “money mule” acts as a middle-man to receive money and transfer it to fraudsters, often in a different country. However, mules often don’t realize what they’re doing. According to BBB:

Money mules often are unsuspecting romance fraud victims themselves who may end up in serious legal trouble for their activities.

The report includes an estimate from Terrill Caplan of Fraud Aid (an organization that advocates for fraud victims) that 20 to 30 percent of 2018 romance fraud victims may have been used as money mules.

In 2020, this trend again continued with the FBI reporting that the pandemic led to an increase in people being tricked into romance scams and money muling.

It also warns that it’s not uncommon for romance fraud victims to unwittingly become drug mules, with many being incarcerated for these crimes in various parts of the globe.

A 2020 study by a group of researchers in Italy found that 63 percent of social media users had been victim at least once to a romance scam. This is in comparison to three percent of the general population. The study delved deeper to find out the most likely traits of victims. These included:

The latest data from the UK is from 2020. It paints a similarly grim picture to other parts of the globe in terms of losses to romance fraud. In 2020, according to Action Fraud, romance fraud reports led to more than £68 million being paid to criminals. Victims lost an average of £7,850 each. According to the authorities, there was a 20% increase in romance scams that led to victims using bank transfers to send money to criminals.

13. Female dating fraud victims in the UK lose twice as much as males

The Action Fraud report from 2019 found that 63 percent of romance fraud victims are female, and women lose twice as much money on average as male victims. The mean age of a victim was 50. 42 percent of victims report that romance fraud has significantly impacted their financial well-being or health.

15. Many victims mourn the relationship loss more than the financial loss

A 2015 study examined the psychological impact of online dating scams. It found that most victims found losing the relationship more upsetting than the financial losses. The study also identified that some victims were using denial as a coping mechanism and that this left them vulnerable to extended schemes.

16. Fraudsters often use a “network of online accounts”

As romance schemes become more sophisticated, it’s common for fraudsters to create a web of online accounts that help corroborate their story. For example, in addition to an online dating profile, they might also create accounts with LinkedIn, Facebook, a bank, and other sites, all to help “prove” their identity.

As well as creating fake accounts, many fraudsters will have a number of “associates” working with them as a team. For example, you might have additional scammers posing as business partners, lawyers, family members, friends, and other acquaintances, all to strengthen the credibility of the scheme. You can think of it as a group of actors putting on a show, albeit one with sinister outcomes.

18. 27% of users of online dating services were catfished within 12 months

“Catfishing” is a term used to describe a scheme in which someone takes on a fake persona. A UK study found that more than one-quarter of respondents who used online dating sites had been catfished in the 12 months prior. In addition, 21 percent said they had been asked for money by or given money to a person they met online.

One of the drivers of the success of romance scams is the fact that an increasing number of people are finding real love online. In 2019, in the US, 39 percent of heterosexual couples met online. And in the UK, around one in three romantic relationships start over the internet. Eharmony predicts that more than half of relationships will begin online by 2031.