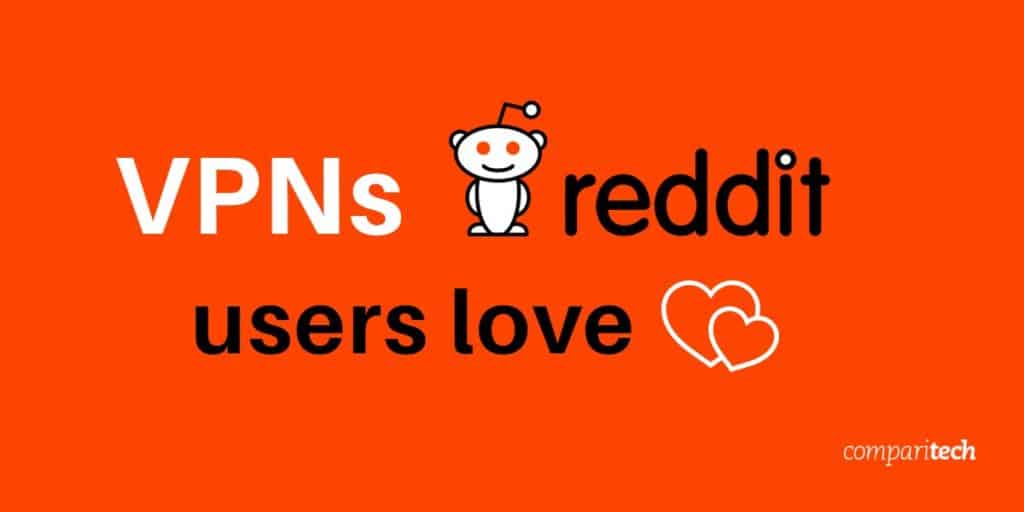 Reddit is one of the biggest internet forums in the world, making it a go-to source for snarky and unfiltered opinions about pretty much anything—including VPNs. The site has also developed its own “shoot-straight-from-the-hip” culture, which tends to strongly favor those who share honest, well-developed opinions. Redditors are also quick to go for the throat when they don’t like something, making it a minefield at times for those who share opinions and reviews about VPNs (some of which are paid ads or trolls).

We scoured several hundred posts and comments on Reddit, looking for Reddit’s favorite and least favorite VPNs. We also double-checked user account posting histories as best we could to weed out the paid and troll accounts. Most Redditors who discuss VPNs recommend using one, but the Reddit community recommends some VPNs more than others.

Our review includes more details below, but if you’re short on time, our research through Reddit posts on VPNs yielded the following results:

ExpressVPN offers thousands of VPN servers in over 90 countries. That gives it one of the widest reaches in the VPN market and makes it particularly favored among the heavily-international crowd on Reddit. Importantly, the service keeps no logs, offers fast 24-hour chat support, allows payment from a large number of sources, and provides a 30-day money-back guarantee to new users. It’s also well-known for unblocking a large number of US-based streaming services like Netflix, Amazon Prime, and more. ExpressVPN topped our VPN speed tests.

So what are Reddit users saying about ExpressVPN? Almost always good things when the topic arises.

One thing you’ll find with Redditors is that they trust experts. This is part of the reason why many Redditors report positively on ExpressVPN. Experts who write and review VPNs tend to view ExpressVPN favorably across multiple factors (server locations, security features, privacy protections).

Overall, Redditors tend to love ExpressVPN for its speed:

What do Redditors dislike about ExpressVPN?

The most consistent complaint we found with ExpressVPN was regarding its usage of virtual servers:

Virtual servers get a much worse rap than they deserve. While physical servers are nice to have, they’re not always practical. In many cases, the locations where ExpressVPN offers IP addresses don’t have reliable physical servers or internet provider speeds that would be adequate for most users connecting remotely through a VPN tunnel. To compensate, ExpressVPN uses servers located in nearby countries and assigns those servers an IP address from the country where the virtual server location exists. ExpressVPN explains why and how their virtual servers work in more detail here. 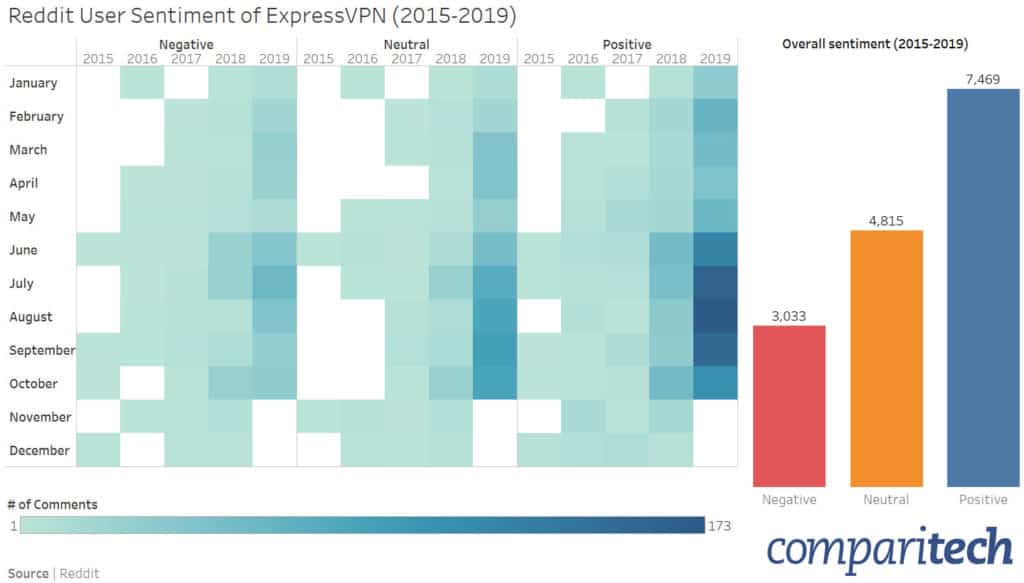 NordVPN has proven privacy and security measures, which have been independently tested and verified following a massive controversy and rumors spread about the service in 2018. The service operates over 5800 servers in 60 countries, making it one of the largest on the market. It’s also one of the fastest options on the market, with a large number of specialized servers for torrenting, streaming, and added browsing privacy. Those interested will find NordVPN offers has a strict no-logs policy, fast speeds, high-level encryption standards, and can work on 6 devices at once.

We call NordVPN the “most controversial” pick primarily because it receives an abundance of contradictory love and hate across Reddit’s privacy and security forums. The damaging reports about the service’s data collection policies are the key reason it’s considered the most controversial pick.

To note, those controversies have been cleared up, and Redditors are starting to accurately report on that fact:

Alongside having its name cleared, Redditors who favor NordVPN do so because of its security and privacy features:

And many love its kill switch:

Few posts sum up all of the other posts supporting NordVPN than this one, however:

What do Redditors dislike about NordVPN?

NordVPN’s controversial status isn’t just because of a false report. Many recent Reddit posts on the service have been negative, with most primarily focusing on poor download speeds:

Does NordVPN have a speed problem? Unfortunately, yes. Based on our most recent VPN speed tests, NordVPN’s speed is short of the best performers. That said, results can vary, and download speed isn’t always everything, depending on how you intend to use a VPN. The service has a 30-day money-back guarantee that they always honor, making it easy to try for a long enough period to give you fodder to post about it on /r/VPNreviews.

Private Internet Access is among the largest VPN providers on the market, and one of the cheapest. The service provides over 3300 servers in 30+ countries and secures them with strong encryption standards. As with many other top-level VPN providers, Private Internet Access maintains a no-logs policy which has also been tested in court on several occasions (the service had no logs to give when requested).

Verified privacy protections aside, complaints about PIA are mixed. Some users groan about low speeds, while others report negatively about the service’s advertising methods:

The biggest concern many users express relates to where PIA is located:

Private Internet Access has had its logs subpoenaed on a few occasions in the US by federal authorities. In every case, authorities came up empty, as PIA’s no-logs policy ensures no data is available. The service may be located in the US, but it’s been proven to maintain strict user privacy standards.

Although a small provider, by comparison, Sweden-based Mullvad provides several hundred VPN servers in a few dozen locations. The service offers a strict no-logs policy, anonymous accounts, and accepts multiple forms of secure payments, including Bitcoin and even cash. The service also comes in at a lower monthly price than most of its competitors, offering service for about $5.50 per month (€5 per month as advertised).

Mullvad is small VPN provider and does not advertise as heavily as the largest services. This makes it far less likely to be mentioned on Reddit, but it’s also one of the smallest options that we found mentioned relatively frequently for its size. And when Redditors mention Mullvad, it’s almost always with a good amount of praise:

While many Redditors consider it one of the most trustworthy VPN providers on the market:

What do Redditors dislike about Mullvad?

While it’s rare to find negative comments about Mullvad on Reddit, the primary ones we found related to the service’s lack of customer support:

This is a common problem with smaller VPN providers. The type of 24/7 customer support offered by larger providers is costly, but they can afford it based on their size. Mullvad keeps its price low by putting much of the setup and troubleshooting into the hands of its users. Despite complaints, Mullvad does provide troubleshooting guides, and users who are unsure of how to fix problems can always turn to /r/VPN for support from Redditors with more technical know-how.

IVPN provides contract-free VPN protection with military-grade encryption standards. The company follows a no-logs policy, operates its own logless DNS server, and has servers available in a growing number of countries across the world. The service also offers a 7-day money-back guarantee.

In 2016, IVPN made a public announcement on its website: It would no longer run an affiliate program. This was huge news, particularly considering most VPN providers have affiliate programs of some kind, and of varying credibility. The result was twofold on Reddit:

Alongside this, Reddit users praise the company of its server speeds:

And it’s good functionality and apps:

What do Redditors dislike about IVPN?

As noted earlier, IVPN’s decision to drop its affiliate program meant its presence on Reddit all but disappeared. It gets mentioned here or there in comments sections, but few users are doing reviews of the service and posting about it. Comments are always positive where they come.

Still, the biggest issue that may drive potential users away from potentially using it is the price. IVPN costs $15 per month, or $8.33 per month if purchased through a year-long subscription. That cost is fairly prohibitive for many Redditors, who tend to favor lower-cost services, and also tend to like the discount or coupon codes they can get through affiliates for other services.

While most VPNs on Reddit receive some love and some hate, PureVPN is one of the few VPNs that receives almost no love from the Reddit community.

As much as we looked, we only found one positive review of PureVPN with any reasonable amount of feedback on the post. Redditors also don’t trust PureVPN after the company turned over logs in a court case that revealed the company’s no-logs policy was suspect.

The one thing Redditors agree on? Free VPNs are bad

Redditors almost universally dislike PureVPN, but there’s one thing they all agree on even more consistently: free VPNs are the worst route you can take to internet privacy and security.

Free VPNs sound great because, well, they’re free. But one common refrain you’ll hear on Reddit and elsewhere is this: “If you’re not paying, you’re the product”. This isn’t always true these days, as many tech companies do charge money and still collect and sell plenty of user data. Free VPNs, however, are a privacy nightmare. Alongside compromising your private data, free VPNs:

If you’re exploring VPN options, avoid free offers. Low-cost VPNs exist, and most have multi-month or year-long plans designed to significantly reduce how much you’ll pay for the service. As well, most legitimate VPN providers regularly offer discounted deals throughout the year.