Struggling to decide between IPVanish and Private Internet Access (PIA)? Which Virtual Private Network (VPN) is better? We’ll cover the pros and cons in this detailed comparison.
James Milin-Ashmore 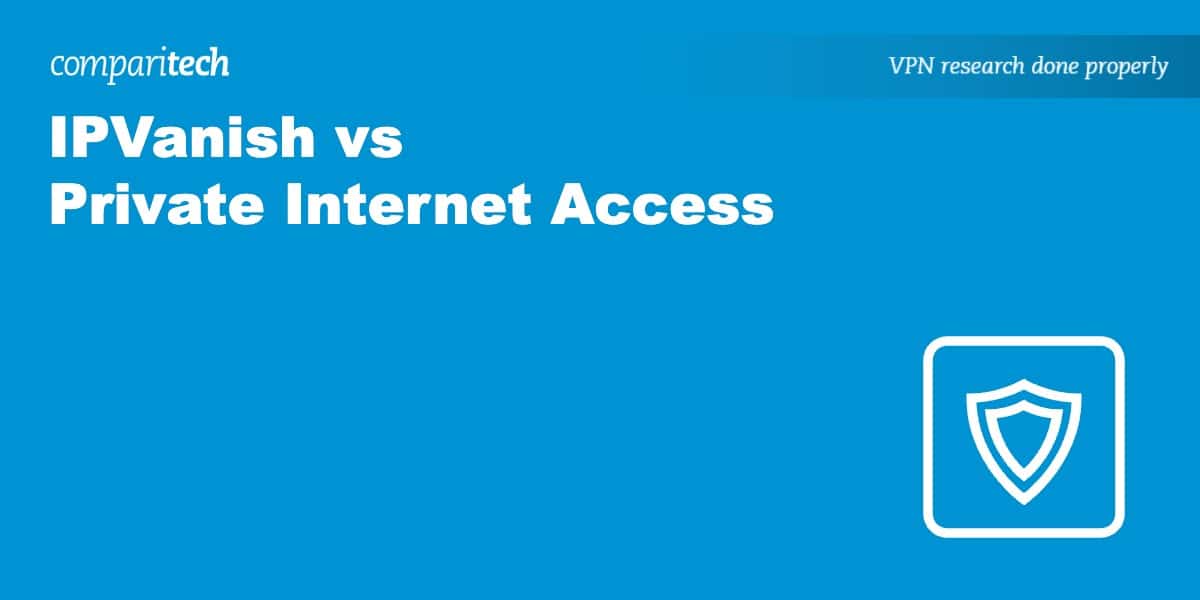 IPVanish and Private Internet Access (PIA) are two top VPNs, with a wide selection of features and benefits to choose from. However, they differ in a number of respects, which can make it tough to decide when picking between them.

We’ll be looking at a range of key criteria in this head-to-head, including pricing, features, security, streaming, and more. IPVanish and Private Internet Access are highly recommended, but which is better overall? Keep reading to find out.

If you only want to use a VPN for a short period of time, such as when you’re on holiday, a monthly subscription is likely to be the best option. However, a rolling subscription tends to be a bit more expensive compared to longer deals, even if you’ll have to pay for the entire term upfront.

Of the two, Private Internet Access is slightly more expensive for a month, coming in at $11.95. It’s $10.99 per month with IPVanish, so the VPNs are priced similarly.

As for longer deals, IPVanish drops down to $47.89 for a year, working out to $3.99 per month. PIA is even cheaper, priced at $39.95 for 12 months. It’s also worth mentioning PIA’s 3-year deal, which drops to $2.03 per month, priced at $79 upfront. Both are affordable, but PIA wins out thanks to the low prices bundled its longer deals.

Both providers come with a standard 30-day money-back guarantee, giving you time to test the service risk-free.

Platforms like Netflix region-lock their content because they only have the broadcasting rights for some countries. How do the VPNs perform when it comes to unblocking streaming services, as well as accessing other restricted sites?

IPVanish works for changing Netflix region. It also works well with HBO Max, Sky Go, and Disney+. It’s not going to be able to access the most comprehensive selection of streaming services, but it does offer strong support for Kodi users. For the likes of Amazon Prime Video and BBC iPlayer, we’d advise looking elsewhere. It does allow for P2P file sharing on all servers.

In comparison, PIA can access Netflix US easily, as well as additional libraries such as the UK version. It was also able to access BBC iPlayer over a UK server, but it wasn’t able to unblock ITV.

With these VPNs, it’ll depend on the service you’re hoping to access, but PIA is the winner overall. Both also offer capable connection speeds, ensuring that you won’t have to deal with any lag or buffering when streaming.

China is one of the more difficult regions to access with a VPN, due to the Great Firewall that aims to control the flow of information within the country. Apps like Telegram and Whatsapp are blocked, while sites like Facebook and Netflix are also banned. The blocks extend to VPN websites, so it can be difficult to download and install the software in the first place.

IPVanish is unreliable for users in mainland China, as it can’t be used to access websites or apps that are censored within the country. Unfortunately, PIA is also inconsistent if you’re planning to use a VPN in China. (The provider was also temporarily blocked in Hong Kong in September 2019.)

There are other providers that can get the job done in China, so we’d look elsewhere if it’s a priority.

For beginner users, setup and the overall interface can make a massive difference in terms of user experience. Thankfully, PIA and IPVanish have an automatic setup wizard, and the download and installation process should only take a few minutes. The providers also offer streamlined dashboards that are easy to navigate.

PIA has Windows, Linux, Mac, iOS, and Android apps. You’ll also find browser extensions for Chrome, Firefox, and Opera. No matter the device, the apps are lightweight, so they won’t be a major drain on battery or resources. It’s also worth noting that PIA is one of the few providers to offer a native Linux app with a GUI, and it has an incognito browser mode called InBrowser for Android and iOS.

IPVanish has apps for Windows, Mac, Android, iOS, Chrome, and Fire TV. However, you’ll have to configure Linux manually. You’ll be able to automatically connect to the fastest server available, and the settings menu can be found with a single click.

An impressive collection of 29,000+ servers in 84 countries is what you’ll find with Private Internet Access. Many of these servers are optimized for use within the US. A number of PIA servers are virtual rather than physical, meaning they’re located elsewhere. For example, if you were to connect to a St Petersburg server to get a Russian IP address, the server is actually physically located in Tallinn, Estonia. (It’s a solid workaround to access more restrictive countries safely.)

In comparison, IPVanish has 2,000+ servers in 50 countries, and is another provider with a large emphasis on US-based servers. IPVanish takes server security a step further as it is one the few providers that owns and operates all of its physical hardware, rather than renting it from a third party. (Hence the lower number of servers in total.)

A case of quality over quantity, IPVanish proved to be significantly faster than PIA. It averaged 488 Mbps in our speed tests, compared to PIA’s average of 94 Mbps. There’s a clear winner if you’re looking for one of the most performant VPNs on the market.

They each use 256-bit AES encryption, which is good news as it’s the industry standard for keeping your data safe and secure. Another similarity is that you’ll find a kill switch included with both VPN providers’ apps. (A kill switch will monitor your connection, and will block internet access to your device if the connection drops unexpectedly to stop data from being leaked.)

There isn’t much to separate the two services when it comes to security. This is a good thing, as both VPNs can be trusted to get the job done.

Both IPVanish and PIA are based in the United States, which is why they have so many servers in the region. This isn’t the best news from a privacy perspective, as the US is a key member of the Five, Nine, and Fourteen Eyes intelligence networks. (Users could potentially be subject to intelligence sharing with other countries within the alliance.)

Considering each VPN has a US HQ, you’ll be glad to hear that they both have a no-logs policy that ensures that they have no data to share in the first place. IPVanish and PIA both request an email address to sign up, but only PIA allows for anonymous payments with cryptocurrencies like Bitcoin and Ethereum.

PIA and IPVanish use shared IP addresses for all of their servers. Put simply, this means that everyone connected to a specific server is assigned with the same IP, making it more difficult to track activities due to the sheer number of simultaneous users.

One key difference is that PIA offers a dedicated IP address as an optional paid extra. If you have a dedicated IP, you’ll be assigned the same IP address every time you connect to the VPN, and you’ll be the only one using it. This is great for everything from hosting online services to bypassing restricted websites.

IPVanish and PIA offer robust customer support, just in case you need any assistance along the way. For example, they both have 24/7 live chat, ticketing, and email support, along with a searchable knowledge base. However, IPVanish did take longer to send a response by email during testing.

IPVanish still has to be seen as the better option in terms of customer service. It has a clear advantage over PIA as it offers phone support in a number of different regions. (US, Mexico, UK, Spain, Australia, and Brazil.) Lines are open seven days a week, between 9 am and 5 am US time.

With responsive live chat coupled with phone support in multiple regions, we’d give this one to IPVanish.

The providers are evenly matched in a number of respects, but there’s still a winner when all is said and done. Of the two, we’d opt for IPVanish. Sure, PIA has lots of (virtual) locations, is great at streaming, and comes with optional extras like a dedicated IP and antivirus software.

However, IPVanish was four times faster during testing, along with offering great customer service and strong results for security and privacy. It’s hard to ignore the large difference in speeds and performance, plus IPV allows for unlimited simultaneous connections with a single account.

It was a close competition, and you can’t go wrong with either service, but we’d recommend IPVanish over PIA. You’ll be able to take advantage of a 30-day money-back guarantee, so you can try it out for yourself risk-free.