6 Best VPNs for Kuwait to bypass censorship in 2020 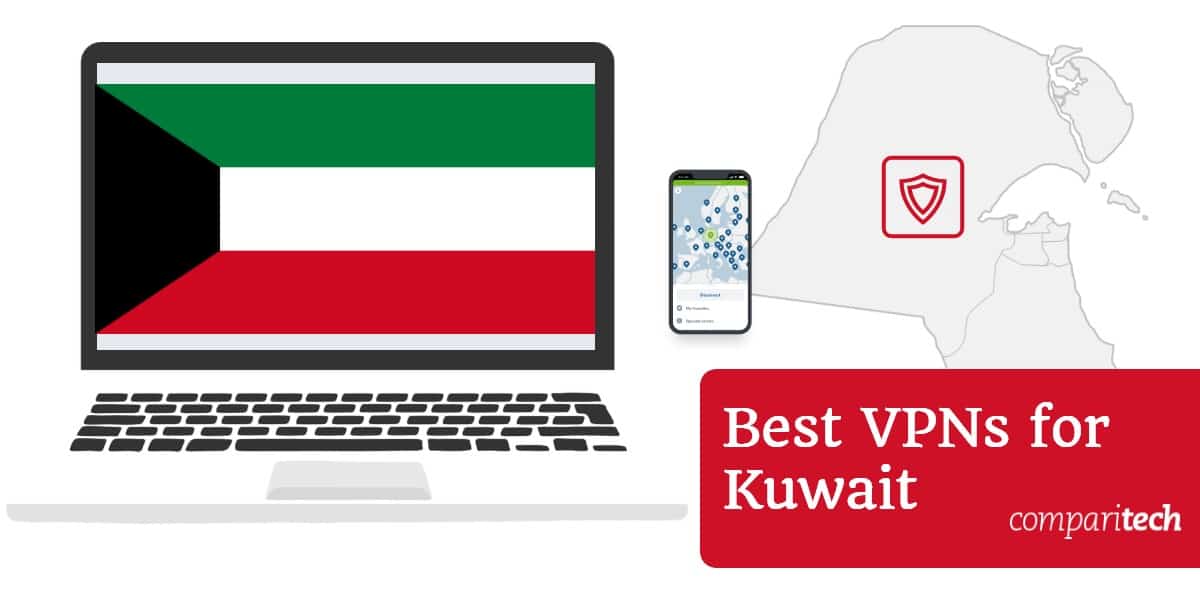 Anyone living in or visiting Kuwait can benefit from using a VPN. Find out why this is the case, what the software can do for you, and the best VPNs for Kuwait.

Kuwait residents have seen an increasing amount of online censorship in recent years, which means a Virtual Private Network (VPN) is a great option for anyone living in or visiting the country. This software will encrypt your internet traffic and prevent snoopers such as your Internet Service Provider (ISP), government agencies, and hackers from monitoring your activity.

Plus, a VPN enables you to connect to a server in a different country and changes your perceived location (by assigning a new IP address) to match. This enables you access geo-restricted websites that would otherwise be blocked.

If you don’t want to read the whole article here is a summary of the best VPNs for Kuwait:

In this post, we reveal the best VPNs for Kuwait and explain more about why and how to use one. Not all VPN providers offer the same standard of service, and differ in terms of privacy, security, speed, customer service, and more. When deciding on the best VPNs to use, the ones that made our list had to meet certain criteria, including:

Based on the above criteria, here is our list of the best VPNs for Kuwait:

ExpressVPN is a top-rated provider because it performs well on all fronts. It operates a global network of more than 2,000 servers in 94 countries and it’s renowned for its unblocking capabilities. Accessing Netflix, Hulu, BBC iPlayer, and other streaming services with ExpressVPN is a breeze. Its user-friendly apps and knowledgeable 24/7 customer support make it a great option for beginners, but advanced features cater to those with more complex needs.

This provider takes privacy and security very seriously. It protects your web traffic with 256-bit AES encryption, backed by perfect forward secrecy, DNS, IPv6, and WebRTC leak protection, and a kill switch. Plus, ExpressVPN never logs any information that could identify you, only some harmless metadata such as the date of connection and session duration. For extra anonymity, you can sign up with a burner email and pay with bitcoin.

ExpressVPN provides desktop apps for Windows, MacOS, and Linux, and mobile versions for iOS and Android. It can be configured with your home router and even makes its own router firmware. Three devices can be connected concurrently under one plan.

BEST FOR KUWAIT:ExpressVPN is our first choice. It’s fast, reliable, very easy to use, and easily unblocks a ton of streaming services. It’s risk-free with a 30-day money-back guarantee.

Read our in-depth review of ExpressVPN.

NordVPN is another stellar choice for a VPN in Kuwait. Its network of more than 5,000 servers leaves you spoilt for choice. It can unblock some of the toughest streaming services, including Amazon Prime Video, Hulu, Netflix, and BBC iPlayer. If you run into issues, live chat customer support is always just a few clicks away.

While using the service, you’ll never have to worry about any information being recorded, as NordVPN sticks to a strict no-logs policy. Your traffic is secured with 256-bit encryption, and a kill switch and leak (DNS, IPv6, and WebRTC) protection ensure it can never escape the encrypted tunnel. Automatic wifi protection, split tunneling, and double VPN are just a few of the bonus features NordVPN has to offer.

Apps can be downloaded for Linux, Windows, MacOS, iOS, and Android, and certain routers can be configured manually. Six simultaneous connections are allowed.

LOW-COST SERVICE:NordVPN offers great value for money. For a low price, you get access to a huge network of servers, excellent unblocking capabilities, and a suite of security features. 30-day money-back guarantee.

Find out more in our NordVPN review.

Surfshark operates around 1,000 servers in over 60 countries. It easily unblocks popular streaming platforms including Netflix US, Hulu, and Amazon Prime Video, and its apps are very simple to use.

A huge bonus with this provider is you can connect an unlimited number of devices under one plan. Surfshark provides apps for Linux, Windows, MacOS, iOS, and Android.

GREAT FOR STREAMING:Surfshark is an excellent choice if you like to stream. It provides secure, reliable connections and is very simple to get started with.

IPVanish has a network of more than 1,000 servers and provides users with a fast, reliable connection. In can unblock many popular streaming services, including Netflix, and offers 24/7 live chat customer support. IPVanish is popular with torrenters and Kodi users; it’s remote control-friendly, so ideal for devices that don’t have a keyboard and mouse.

This provider protects traffic with 256-bit encryption, perfect forward secrecy, a kill switch, and DNS, IPv6, and WebRTC leak protection. No logs are kept whatsoever, and IPVanish owns all of its servers (other providers lease them), which is another big plus for privacy.

You can connect a whopping ten devices at a time under just one plan, making this a bargain option if you have lots of devices in your household to cover. Apps are available for Windows, MacOS, iOS, and Android. Linux and certain routers can be configured manually.

TORRENTING VPN:IPVanish is a top choice among torrenters. It offers a reliable, secure connection and adheres to a no-logs policy. It’s less suitable for those looking to stream as it doesn’t unblock some of the more popular services reliably. 7-day money-back guarantee.

Read our in-depth review of IPVanish.

PrivateVPN is a newer and smaller provider, but neither of these things has stopped it gaining a great reputation as an excellent VPN. Known for its unblocking capabilities (Netflix, Hulu, Amazon Prime Video, BBC iPlayer, and more can be accessed) and blazing fast speeds, this could be an excellent choice for a Kuwait VPN. User-friendly apps and 24/7 support make this an even more attractive option.

Just because it’s small doesn’t mean it has sacrificed any features. PrivateVPN offers military-grade encryption, leak protection, and a kill switch. It keeps no logs of any personal information.

A basic plan allows for six simultaneous connections and apps are available for Windows, MacOS, iOS, and Android.

UNBLOCKS STREAMING SERVICES:PrivateVPN easily unblocks a plethora of streaming sites. Although it has a small network of servers, PrivateVPN can get you access to Netflix, BBC iPlayer, Hulu, and more. 30-day money-back guarantee.

Delve into our full review of PrivateVPN.

Hotspot Shield has an ample network of more than 3,000 servers in over 70 countries. It offers incredible speeds and reliable connections from anywhere in the world. Hotspot Shield will help you unblock all your favorite streaming services, including Netflix, Hulu, and Amazon Prime Video.

You can be sure your data is safe as Hotspot Shield employs strong encryption standards, and there’s a kill switch and leak protection built in to apps. No user-identifying logs are maintained past disconnection from the app. Instead of OpenVPN, Hotspot Shield uses its proprietary Catapult Hydra protocol, which is endorsed by some top security firms.

Each plan allows for up to five simultaneous connections, with apps available for MacOS, Windows, iOS, and Android.

GREAT SPEEDS:Hotspot Shield is a fast, reliable VPN that will help you access all the content you want. Plans come with a generous 45-day money-back guarantee.

Can I use a free VPN in Kuwait?

There’s no doubt that there are plenty of free VPNs available, but there is a lot of doubt about their worth. Most free VPN providers offer a subpar service, both in terms of performance and security. They typically comprise small networks with far too many users vying for bandwidth. This results in slow, unreliable connections and wait times to connect to a server.

If you do get a stable connection, there’s no guarantee it will work for your intended purpose anyway. For example, free VPNs simply don’t have the resources to provide the unblocking capabilities of their paid counterparts, and usually won’t be able to help you stream content from Netflix, Hulu, and similar sites.

That being said, free VPN providers are in the business to make money. They typically do this by bombarding you with ads or upsells, or collecting your data using tracking cookies for sale to third parties. These services should be installed with caution; some don’t encrypt your data and many VPNs apps have been found to carry malware.

We recommend avoiding all of this hassle and paying a nominal amount for a reliable, secure connection.

Why to use a VPN in Kuwait

Kuwait’s government has been known to impose censorship related to online activity. A cybercrime law it introduced in 2015 was criticized due to restricting freedom of expression, including imposing fines and prison sentences for acts like criticizing emir in an online forum, insulting religion or religious figures, criticizing the country’s judicial system, or harming relations with other states.

The law came at a time when many opposition activists and other government critics were being prosecuted. As expected, this pattern continued after the law was introduced. One notable case was that of Waleed Fares, a Kuwaiti activist who was sentenced to ten years in prison for making offending comments on Twitter.

Government censorship in Kuwait isn’t new and in 2014, a telecommunication law gave the Kuwaiti government the right to deny users access to the internet and block content, among other things.

Due to the above and other cases of censorship, a VPN is a great tool to have while visiting the country. While the internet is censored, VPN use is legal in the country.

Aside from online censorship, another major reason residents of and visitors to the country might need a VPN is to access their regular services from abroad, such as streaming services and online banking.

For example, while Kuwait residents have access to Netflix, the library is limited. Netflix offers a different library depending on which country you’re in, due to licensing restrictions. Even if you signed up in another country, when you access the Netflix site or app from Kuwait, Netflix will detect your location and auto-direct you to the Kuwait library.

To circumvent this, you need to connect to a VPN server in the country whose library you want to access. So to access the US Netflix library (the most popular), you connect to a US server, and for Netflix UK, a UK server is needed. You can access other popular streaming services, such as Hulu, BBC iPlayer, HBO, and more, in a similar manner. You can also do the same for other sites that geo-restrict access, such as gaming, gambling, and sports sites.

While many global services won’t block access from Kuwait, trying to log in with a Kuwait IP address may raise some red flags, and ultimately could see you locked out of your account. This is not a great situation to be in when traveling and obviously one you’d rather avoid.

Thankfully, the solution is as simple as using a VPN to connect to a server in your home country and accessing your online bank account with your new IP address. This way, your bank’s alert systems won’t be triggered and you won’t have to worry about having limited access to funds.

Note that even if you plan on using a VPN, you should still warn your bank that you’ll be traveling to prevent issues arising from card use or other types of transactions while abroad.