Not sure of the best VPN to use with your BT Broadband? It can be difficult with so many options on the market. We're here to show you exactly why you need a VPN and the best value VPNs you can use with BT Internet.
Mark Gill TECH JOURNALIST, VPN AND PRIVACY SPECIALIST 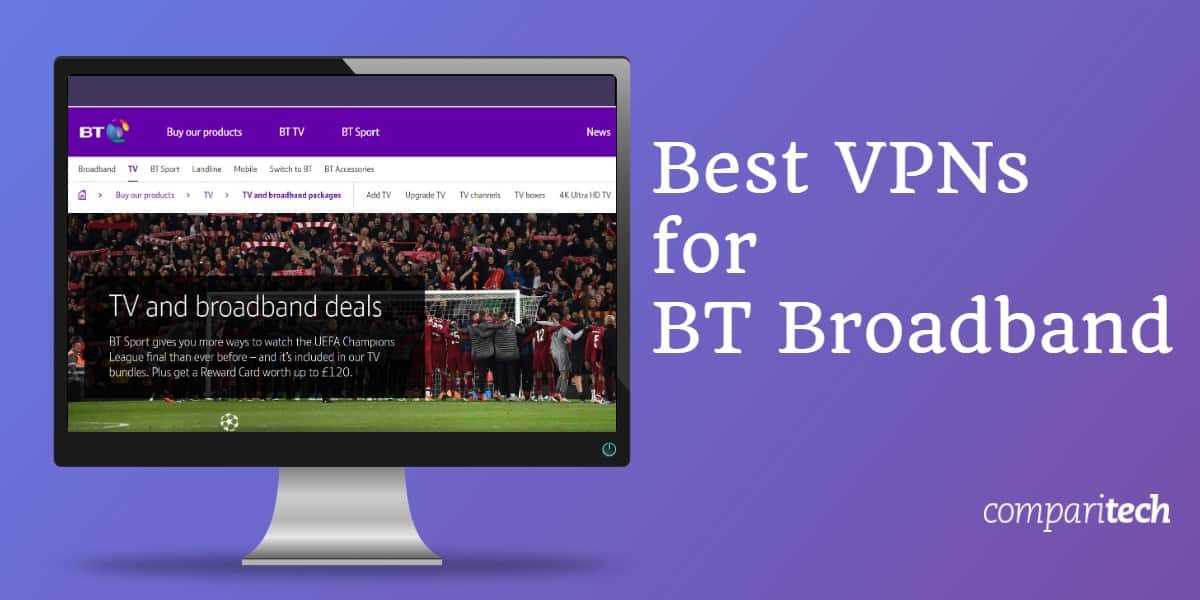 A VPN or Virtual Private Network is a great way to avoid bandwidth throttling by Internet Service Providers (ISPs). It also protects your privacy by preventing your ISP from monitoring and logging your online activity. VPNs do this by routing your internet traffic through an encrypted tunnel to one of their own servers. The best VPNs for BT Broadband have servers all around the world, allowing you to access region-locked content wherever you are.

Just in case you don’t have time to read the full article, here’s a quick summary of the best VPNs for BT Broadband:

Most VPNs should work with BT Broadband. However, not all offer the speed and security that make for a positive browsing experience. We’ve chosen the best VPNs for BT Broadband by ensuring they meet the following criteria:

The best VPNs for BT Broadband

Here’s our list of the top VPNs for BT Broadband users:

ExpressVPN is the best all-round VPN for BT Broadband thanks to its high-speed servers and excellent overall security. This is your best bet for unblocking region-locked content as it has over 3,000 servers in an impressive 94 countries. As such, you can use this VPN to unblock most geo-restricted content including Netflix, ESPN, and HBO Go. Better still, ExpressVPN’s high speeds mean you shouldn’t experience any lag whatsoever.

You have a great deal of flexibility when you choose to use ExpressVPN with BT Broadband. For instance, this service offers apps and extensions for all major operating systems and browsers. These are very easy to use, even for beginners. However, 24/7 live chat and email support are on hand should you have any difficulties. ExpressVPN allows you to secure up to 3 devices simultaneously.

There are several features in place designed to secure your data and protect your privacy. To begin with, ExpressVPN doesn’t keep any identifying logs of its users so you’ll be able to browse the web anonymously. There’s also 256-bit AES encryption, DNS, IPv6, and WebRTC leak protection, and an automatic kill switch. This VPN is based in the British Virgin Islands, far from the Five Eyes intelligence alliance.

With ExpressVPN, you have the choice of using apps for Windows, Mac, Android, iOS, Linux, and routers. Browser extensions are available for Chrome and Firefox.

BEST VPN FOR BT BROADBAND:ExpressVPN is a fast and reliable VPN with 3,000 servers in 90 countries. Unblocks most region-locked content including Netflix and ESPN. User-friendly apps and browser extensions, 24/7 live chat support, and excellent overall security with encryption. A 30-day money-back guarantee means you can try it risk-free.

NordVPN has one of the largest server networks of any VPN with over 5,100 servers in 60 countries. This includes servers in the UK, US, Australia, and Japan, an excellent choice for unblocking streaming services such as Netflix and Amazon Prime Video abroad. It’s worth knowing that there are servers optimized for P2P sharing as well as those which offer even greater online privacy via Onion Over VPN or multi-hop connections. Making it one of the best value VPNs to use with your BT internet.

You can connect up to 6 devices simultaneously with NordVPN. There are a variety of beginner-friendly apps as well as browser extensions which make it even easier to stay safe online. 24/7 support is available over live chat, and we’ve found the staff to be very quick to reply. NordVPN’s security is as good, if not one of the most secure VPNs on the market. It includes 256-bit AES encryption, DNS and IPv6 leak protection, and a kill switch. There’s also a strict no-logs policy to protect your privacy.

OUTSTANDING VALUE:NordVPN has an impressive 5,000 servers. Offers servers optimized for security as well as P2P sharing. Unblocks Netflix and Amazon Prime Video. No-logs VPN with 24/7 live chat support. Use on up to 6 devices. 30-day money-back guarantee.

CyberGhost has a rapidly growing network of over 3,500 servers which are spread across 59 countries. This is one of the fastest VPNs on the market which makes it well suited to streaming HD video. Indeed, you’ll be able to use Netflix US, Hulu, and BBC iPlayer from anywhere, without being interrupted by lag or buffering. Better still, CyberGhost allows up to 7 simultaneous connections per account, perfect for any family with BT Broadband.

This is an easy VPN to use as there are beginner-friendly CyberGhost apps for all major operating systems, making finding the right server quick and easy. There’s also plenty of servers dedicated to torrenting with no bandwidth limit. CyberGhost is a no-logs VPN that uses 256-bit AES encryption as well as DNS and IPv6 leak protection. You’ll also find an automatic kill switch that prevents your data from being leaked in the event of the VPN connection dropping.

IPVanish lets you connect up to 10 devices simultaneously. It has a network of around 1,300 servers throughout dozens of countries around the world. The speeds offered by this US-based VPN are fast enough for browsing and streaming live HD content. IPVanish states that it offers unlimited bandwidth as well as unlimited P2P traffic. This makes it an option worth considering if you suspect BT Broadband is throttling your connection.

Should you have any issues with IPVanish, you’ll be able to contact their 24/7 support service via live chat or email. However, this VPN service is easy enough to use with user-friendly apps for desktop and mobile. When it comes to security, IPVanish protects your privacy with 256-bit AES encryption, DNS leak protection, and a kill switch. It also includes a strict policy against the collection of connection and activity logs, so your activities can’t be traced back to you.

10 SIMULTANEOUS CONNECTIONS:IPVanish can be used on up to 10 devices simultaneously. A network of 1,300 servers with unlimited bandwidth. Includes 24/7 support and protects your privacy with encryption and no-logs policy. 7-day money-back guarantee.

PrivateVPN has fast servers for browsing, streaming, and torrenting. While its network is small with around 100 servers, these are located across 60 countries. This means you’ll be able to access regionally restricted services including the likes of Netflix, Amazon Prime Video, and Hulu abroad. PrivateVPN states that it’s a P2P-friendly service and supports unlimited P2P file-sharing. You can also use this VPN to secure up to 6 devices simultaneously.

What’s particularly noticeable about PrivateVPN is its ease of use. Its desktop and mobile apps allow you to connect to a server in a single click. If you have any difficulties setting up, this easy VPN even offers remote installation. PrivateVPN uses 256-bit AES encryption, DNS leak protection, a kill switch, and a no-logs policy to safeguard your privacy. So, you can keep your information secure while you’re using BT internet.

You can download PrivateVPN apps for Windows, Mac, Android, and iOS though Linux and routers require manual configuration.

Surfshark is one of the best VPNs for BT Broadband for several reasons. First, you can use it to connect an unlimited number of devices, which makes it a great option for families. Additionally, this VPN has a network of over 800 servers in 50 countries and allows you to access all sorts of geo-restricted content including Netflix and Hulu. Server speeds are fast and connections reliable, which means streaming and torrenting are stress-free.

If it’s your first time using a VPN, you’ll appreciate the simplicity of Surfshark’s apps and browser extensions. The apps include a number of useful features such as an ad-blocker and whitelister. This VPN includes 24/7 support via live chat and email. Your personal information is protected with 256-bit AES encryption and protection against DNS and IPv6 leaks. Last but not least, Surfshark is a no-logs VPN and features a kill switch, ensuring your data is never exposed.

EXCELS AT UNBLOCKING:Surfshark works with Netflix, Amazon Prime Video, Hulu, and more. You can use it to connect an unlimited number of devices. 24/7 live chat support and beginner-friendly apps. No-logs policy and ad-blocker feature for your security. 30-day money-back guarantee.

Why should I use a VPN with BT Broadband?

There are a number of reasons why it’s advisable to use a VPN with BT Broadband or any other ISP, particularly in the UK. The first is that the UK government is a member of the Five Eyes intelligence alliance whose powers include forcing ISPs such as BT to hand over data on users.

The Investigatory Powers Act 2016, infamously dubbed the “Snooper’s Charter”, expanded the powers of the UK intelligence community and police. It requires that UK ISPs collect internet connection records and information including IP addresses and lists of websites and services visited. Needless to say, if you don’t want such information available to third parties, you should use a VPN with BT or with any other UK-based ISP.

How to use a VPN with BT Broadband

The process for setting up a VPN to work with BT Broadband is the same as with any other ISP. Indeed, all you need is an internet-connected device that is compatible with the VPN in question. All of the best VPNs for BT Broadband offer apps for desktop and mobile at the very minimum. Some even offer browser extensions for Chrome and Firefox.

Here’s what you need to do to use a VPN with BT Broadband:

Using a VPN with BT Broadband

Can I use a free VPN with BT Broadband?

Yes, free VPNs will work with BT Broadband and most ISPs you’re likely to come across. However, most free VPNs are so slow that they’re just not worth your time. This is because they tend to have a very small network of servers and far too many users to meet demand. In fact, some free VPNs even engage in bandwidth throttling in order to get a handle on this. This makes browsing slow and streaming frustrating with a lot of buffering and lag.

Many people in the UK choose to use VPNs to avoid the logging carried by ISPs on behalf of the UK government. Unfortunately, many free VPNs choose to log your information anyway, selling it to third parties. All in all, free VPNs are slow, poor at unblocking content, and not at all secure. That’s why we only recommend the best-paid VPNs for BT Broadband.