How to get an IP address for Kuwait with a VPN

Want to access Kuwaiti content and services while traveling abroad? We'll show you how easy it is to obtain an IP address for Kuwait using a Virtual Private Network (VPN)
Osman Husain Tech journalist, VPN and streaming expert 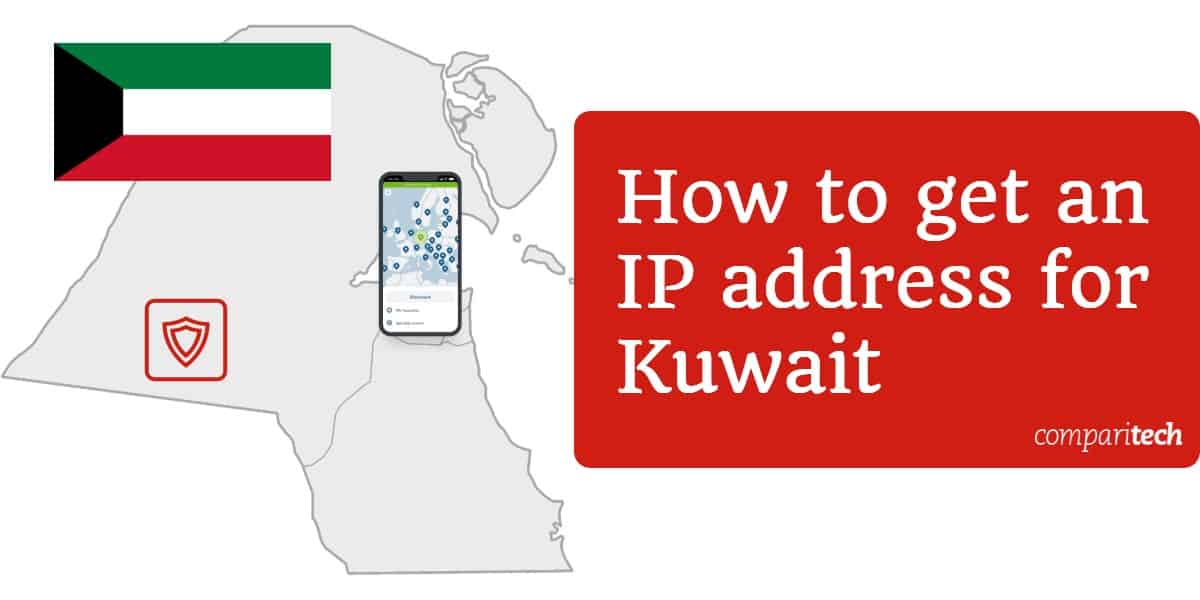 Kuwaiti streaming sites such as KTV 1, Kuwait Plus, Al Majlis, KTV 3, and Funoon TV usually only allow people armed with a Kuwaiti IP address to access their content. If you try to view content with an IP address from anywhere else in the world, you’ll be blocked from proceeding further.

A Virtual Private Network (VPN) is the best solution. VPNs work by encrypting all the traffic flowing to and from your device and routing it via an intermediary server. When you select a server in Kuwait, your actual IP address will be replaced with a Kuwaiti one, so it will appear as if you’re actually in the country.

VPNs have a myriad of additional benefits, too. The encryption factor is a particularly valuable feature. This protects and guards your web activity so that your connection is virtually unhackable and safe from any eavesdropping attempts by your Internet Service Provider (ISP) or nosy hackers. We explain how to get a Kuwait IP address and the best VPNs for the job.

How to get an IP address for Kuwait

VPNs are pretty easy to get started with. Just follow the simple steps below and you can be browsing the internet as if you were in Kuwait in no time.

Here’s how to change your IP address to Kuwait:

TIP: WANT TO GET A VPN FOR FREE? We’re aware that not every user requires VPN services for an extended period of time. If you need access to a VPN for a month or less, we recommend you take advantage of PureVPN’s 31-day money-back guarantee. You’ll need to make an upfront payment but the transaction will be reversed if you request a refund within the first 31 days. It’s a risk-free option.

There are a plethora of VPN services wanting your business but it’s important to make an informed decision before settling on one. You’ll want a provider that offers top-notch services while maintaining a stable connection.

Based on these needs, we’ve whittled down our list of the best VPNs for a Kuwait IP address on the following factors:

What’s the best VPN to get a Kuwait IP address?

Here’s our shortlist of the best VPNs to get an IP address for Kuwait.

PureVPN has an expansive network that consists of more than 1,750 servers spread across the globe. Options for Kuwait are included in the package.

This provider is able to unblock several geo-restricted services such as Netflix, Hulu, and Amazon Prime Video. It fares well when analyzed from a speed perspective and in our user review, we were able to stream 1080p video without any lag and play online games without issue.

A completely revamped privacy policy, in effect since May 2018, states that the company doesn’t record user or VPN IP addresses or timestamps.

This is one of the rare providers that offer servers inside China, which might be good news keeping in mind new Chinese – Middle Eastern trade links.

Apps for Windows, MacOS, Android, and iOS are available. One account allows for five devices to connect concurrently and customer support is available around the clock.

BEST VPN FOR KUWAIT:PureVPN is our top choice for a Kuwait IP address due to its speed, security, and performance. Take advantage of its 31-day money-back guarantee and try it risk-free.

HideMyAss is headquartered in the United Kingdom and operates 930 servers in 190 countries including two (virtual) servers in Kuwait. This provider has been in the business for quite some time and operates a freemium product, meaning you can sign up for a free option but the more advanced features are only available in the paid version. It has over 400 million users spread across its range of services — an impressive number by any yardstick.

HideMyAss offers the ability to choose servers earmarked for specific use cases such as accessing streaming sites or engaging in P2P filesharing (torrenting). It’s fast, stable, secure, and ships with the capability to unblock several geo-restricted sites such as Netflix, Hulu, and BBC iPlayer.

A slight concern is that HideMyAss’ default setting is to log user data. Having said that, it’s possible to adjust this within the app. If you run into any problems, simply contact the 24/7 live chat support team and they’ll help you out.

You can find apps for Windows, MacOS, Android, and iOS. A single connection allows for five devices to connect at the same time.

GREAT FOR STREAMING:HideMyAss works with many streaming services and has fast speeds and top-tier encryption. All plans ship with a 30-day money-back guarantee.

Should I use a free VPN to get a Kuwait IP address?

Free VPN services may seem appealing, but the fact of the matter is that they have several disadvantages when compared to paid options. Take speed, for instance: free VPNs typically don’t offer unlimited bandwidth and usually have far more users than existing servers can support. Be prepared to wait to connect to a server due to frequent network congestion and a small choice of server options.

What’s more, in the course of our research we noticed that Kuwait isn’t a priority country when it comes to hosting VPN servers as only a scarce few providers offer options there. And these are paid services with lots of servers spread across the globe. When it comes to free VPNs, it’ll be very difficult for you to find one that supports a Kuwait IP address.

Of course, free VPNs are tempting because there’s no cash transfer involved (plus, who doesn’t love freebies?). Unfortunately, this isn’t the same thing as obtaining a product sample at the new coffee shop down the road. Your data, browsing history, passwords, and other sensitive information has to flow through VPN servers so it’s in your best interest to practice extreme caution before opting for a free VPN.

If you’re not convinced, consider that some free VPN providers have been caught mining user data and selling it on for a profit. Another unscrupulous provider actually piggybacked on idle bandwidth to build botnet armies and attack rival sites. A 2016 survey of free VPN apps found that over one-third contained malware of some kind.

Basically, you could be introducing privacy risks just to save a few dollars. We recommend that you use a VPN that always places user interests and privacy first.

Can I use a VPN to watch Kuwaiti television?

Connecting to one of the VPN providers we’ve recommended in this article and logging on to a server in Kuwait will make it appear as if you’re browsing the web from within the country. This means online television streams such as those from KTV 1, Kuwait Plus, Al Majlis, KTV 3, and Funoon TV should be accessible without any problems.

However, some channels may ask you to sign up and obtain a username and password before full access is granted. This process could also entail providing a local home or office address. If you run into any problems, it’s advisable to check with individual providers.

What’s the current state of internet freedom in Kuwait?

Internet surveillance and censorship in Kuwait have been on the upswing in the past several years. In October 2012, a blogger was arrested and incarcerated for two years because he tweeted remarks considered to be offensive to Emir Sheikh Sabah al-Ahmad al-Sabah.

Freedom House states Kuwait is only ‘partly-free,’ noting that its status as a monarchy allows it to impinge on individual rights and liberties as well as repress the online environment whenever it deems necessary.

There’s little to no independent media and any criticism of ruling authorities is simply not allowed.

For all intents and purposes, it’s probably in your best interests to navigate the web safely and securely with a VPN. If you’re a blogger or whistleblower, read our guide on how to blog anonymously.

What else can I do with an IP address from Kuwait?

We’ve discussed how a VPN-enabled IP address can help thwart geo-restrictions on streaming sites. Another common reason people sign up for a VPN is that it enables them to access their online bank accounts safely and securely. An IP address from Kuwait is useful for local residents traveling abroad to access banking services from National Bank of Kuwait, Commercial Bank of Kuwait, Al Ahli Bank, Gulf Bank, and more. For example, if you’re in the US but logging on while connected to a Kuwait VPN server, you shouldn’t cause any fraud alerts within the bank’s detection algorithms.

Plus, the encryption features embedded into your VPN means your connection is safe from hackers and snoopers. This makes it a hassle-free experience to access public wifi. Public wifi networks are those that you ordinarily find at airports, hotels, malls, and cafes. Since they attract users in droves, they can be targeted by hackers who take advantage of poor internal security to pilfer and steal your data.

What are the other methods to obtain an IP address from Kuwait?

VPNs are the quickest way to get an IP address from Kuwait, but there are a couple of other options too. However, we should add from the outset that these might take a long time to set up and definitely won’t give you the same experience as a paid VPN might.

The Tor browser is one way you can obfuscate your IP address and port it inside Kuwait. Unfortunately, this method makes your connection extremely slow so it’ll be next to impossible to stream HD content. Another reason to opt out is that Tor has gained a questionable reputation after gaining prominence as a method for criminals to access the dark web.

Technically, you could also use proxy servers to hide your location. However, these also come with data caps, few server options, and unclear privacy settings. Proxy servers don’t have sophisticated cloaking technology so it’ll be easy for services like Netflix and Hulu to detect and block them. We don’t recommend this as a method to stream content or access online bank accounts.

Kuwait map by Golbez on Wikimedia licensed under CC BY-SA 3.0