Surfshark vs ProtonVPN: Which wins?

If you’re struggling to decide on a VPN to meet your needs, we’ve done the hard work for you. Check out our comparison of two leading VPNs - Surfshark and ProtonVPN.
Craig McCart 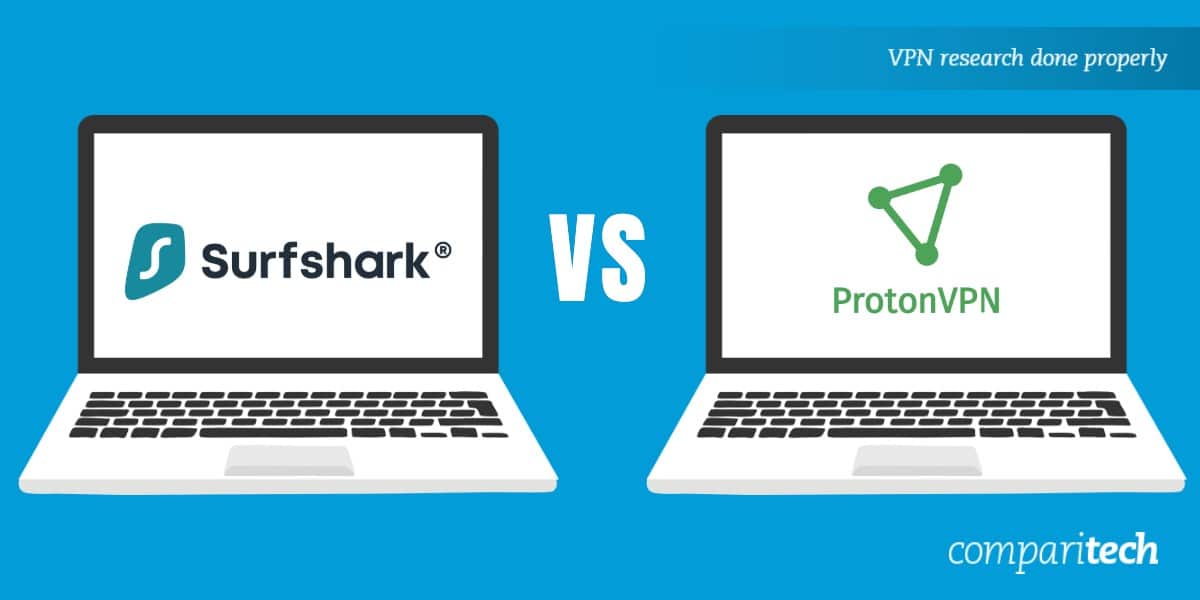 Choosing a Virtual Private Network (VPN) to fit your requirements is no easy task, especially if you’re new to the VPN world and don’t know where to begin. We’ve taken two reputable brands, Surfshark and ProtonVPN, and compared them to help you get a better understanding of the pros and cons of each.

In this comparison, we will cover things like features, what they mean, subscription costs, streaming quality, and more. In a rush and want the answer now? Surfshark is the winner. Keep reading to find out how we came to that conclusion.

Both VPN providers offer plans ranging from one month to two years. Surfshark’s monthly sub starts at $12.95 and ProtonVPN at $7.49. Neither price points are bank-breaking sums. However, it’s worth noting how significant the savings are for both providers’ two-year plans, although these are more suited to those looking for a lengthier subscription.

Surfshark’s two-year plan totals just over $20 more than the six-month subscription, so if you’re serious about securing your internet, it’s a no-brainer.

Surfshark’s two-year plan will set you back $59.76 ($2.30 per month), though ProtonVPN is billed at $119.76 for two years ($4.99 per month). ProtonVPN’s deal is still a significant saving versus its monthly plan, but Surfshark brings the heaviest discount at half the price of ProtonVPN’s best deal.

Both providers offer a 30-day money-back guarantee, allowing you to try before you buy. Try either VPN out for 30 days, and if it doesn’t meet your expectations, you can cancel and receive a full refund.

BEST DEAL FOR SURFSHARK:Save 82% when you choose Surfshark’s 2-year deal.

Surfshark and ProtonVPN both hit the mark for the features we’d expect to see packed into a premium VPN. Both providers include a built-in ad blocker and DNS leak protection to prevent your online activities safe from prying eyes. Surfshark takes its privacy tools to a new level with software that prevents your activities from being tracked, along with a malware scanner that warns of dangerous sites before you visit them.

Each VPN offers full P2P support, providing peace of mind that your torrenting activities aren’t being monitored, and your ISP won’t throttle your connection when torrenting.

Both brands offer apps across all major platforms with command-line solutions for Linux-based systems. Split tunneling comes as standard for both providers, allowing you to route your Windows and Android VPN traffic separately from the activities you need to perform over a direct connection.

Browser extensions are available for both VPNs, although these will only encrypt your browsing activity and not the traffic across your entire device.

Many users invest in a VPN to help them bypass geo-restricted content, i.e., the Netflix library in the UK is significantly smaller than that of Netflix US. Accessing these services directly limits users to the media catalogs determined by the region they are connecting from. Streaming services use scanners to identify VPN usage and block the connection once detected.

Fortunately, both Surfshark and ProtonVPN performed exceptionally in this category. Although it was a close competition, Surfshark failed to unblock ABC, whereas ProtonVPN bypassed the restrictions of every provider in our tests.

Some territories deploy strict controls to prevent VPNs in their country, with China being one of the strictest regions today.

China’s Great Firewall blocks access to social media apps, instant messaging services, and more to those connecting directly from the country unless you use a VPN in China.

Each of these VPNs make it super easy for beginners to get set up and connected on desktop and mobile. Simply download the app for your chosen device, log in, and select from the list of server locations. If you want to connect to your nearest and fastest server, both providers will hook you up within seconds.

Surfshark offers the most app customization, allowing you to change the app appearance, connect automatically at startup, and enable NoBorders Mode (to bypass heavy censorship).

Surfshark wins first prize in this category, no debates needed. It has over three times the number of servers that ProtonVPN has and exceeds the available server locations that ProtonVPN offers.

Why does that matter, though? We’re so glad you asked! ProtonVPN’s users are squeezed into a network of 1000 servers, meaning you’re more likely to experience poor connection speeds and higher latency, especially during peak connection times.

That said, the speeds we recorded on ProtonVPN aren’t bad at all. This is likely down to the recent adoption of the WireGuard protocol to provide a generous speed boost.

We put both VPNs through rigorous speed tests, and although ProtonVPN produced speeds sufficient for streaming 4K content comfortably at 65.70 Mbps, it was Surfshark that came out on top with the best average server speeds overall.

Sufficient speeds across the entire network of servers available for a VPN provider are often more important than obtaining great speeds across one or two servers. For example, the US or UK servers available with our providers could produce efficient download speeds, but if you then switch to an EU server the speeds could be poor – that’s why during our testing we test a vast range of servers to ensure speeds are consistent across the board.

Unlike Surfshark, which uses its NoBorders cloaking technology to obfuscate your VPN activity, making it harder for ISPs and websites to detect VPN usage, ProtonVPN doesn’t offer such a feature. As a result, some websites like Omegle could detect users connecting via a VPN tunnel and may present an error preventing access to the service.

Both providers deploy an internet kill switch with their apps, ensuring your connection is disabled if your VPN fails. This is useful if you’re downloading torrents and you don’t want this to be visible to your ISP. If your VPN connection fails, your entire internet connection drops to avoid your activity being flagged.

Each VPN employs 256-bit AES encryption (the same grade as the military uses) to ensure your internet activities are never compromised. 256-bit encryption relies on a secret key to scramble your traffic, meaning ISPs could see internet usage on your connection, but they cannot decipher what’s contained in the packets of data being sent or received.

Surfshark and ProtonVPN use RSA-2048 channel encryption which is certainly secure, but not quite as strong as VPNs utilizing 4096-bit keys.

Both brands use shared IP address allocation, meaning each user that connects to a specific VPN server will share an IP address. Although shared address allocation is common among VPNs, with potentially thousands of users performing different activities on a shared IP, it makes it impossible to know what each user is up to. Dedicated IP addresses that don’t change and aren’t shared are sometimes on offer, but this is not currently a supported feature for either brand.

Although neither VPN offers anti-DDoS protection, that’s not to say you aren’t protected if an attack is attempted. VPNs generally provide a layer of protection in the instance of such an attack, switching the server of the IP address under threat, and because the networks of these providers are shared by large sums of users, you’ll be unlikely to notice any performance issues if an attack were to take place.

Surfshark is based in the Netherlands, meaning it is a Nine Eyes Alliance member, which could theoretically allow law enforcement to request logs from the provider. Surfshark operates a zero logs policy to ensure your online activities are anonymous, and only keeps basic diagnostic logs to help improve their service. As a Nine Eyes member, Surfshark insists there’s no reason for them to record user data nor should it be requested by local authorities.

ProtonVPN is based in Switzerland, which isn’t part of the 5 Eyes Alliance, however, it does work with other 5 Eyes Alliance members for law enforcement data requests. ProtonVPN provides a transparency report on its website for privacy-conscious users, detailing requests for information from internal and foreign law enforcement. ProtonVPN also enforces a strict logs policy, only recording timestamps of user connection requests.

ProtonVPN doesn’t perform as well as we’d like in this category with no live chat, phone support, and lengthy delays in receiving responses to tickets. It does have a detailed knowledge base, but that’s not always useful when your issue is more urgent.

Surfshark excels in this area with ZenDesk live chat available 24/7 for problems that cannot wait. Ticket response times are reasonable, and their knowledge base includes answers to most queries to help while you await a ticket response.

ProtonVPN has got a lot going for it in terms of speed, features, and keeping your online activities secure, but it didn’t match up to the full-featured VPN offered by Surfshark. Both providers offer apps for all major platforms, connections are reliable, and each VPN does a great job of bypassing geo-restricted content. For ProtonVPN however, the positives end there.