Having a hard time choosing between TunnelBear and IPVanish? Not to worry. Our detailed comparison looks at everything from privacy, security, pricing, streaming, and more.
Marc Dahan Specialist in online privacy 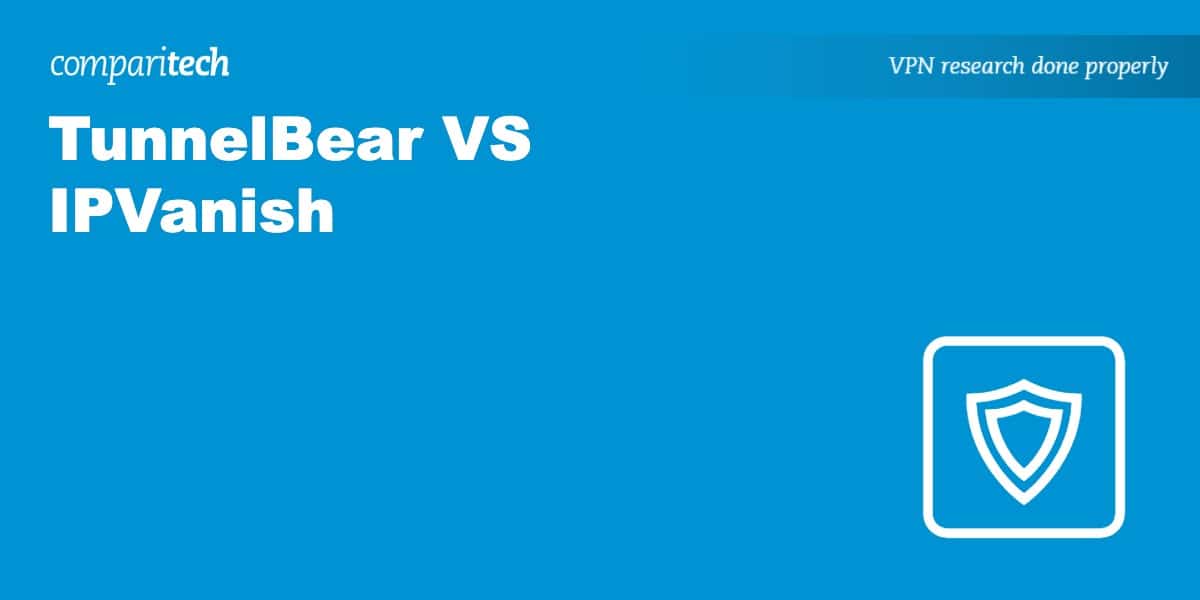 It can be tough to figure out which VPN provider to go for, especially if you focus on providers’ marketing. If that’s all you have to go on, almost every VPN provider will appear to be “the best” (whatever that means). But, from the more subtle to the more obvious, there are, of course, differences. We’ll be highlighting both in this comparative review.

In this post, we’re comparing TunnelBear and IPVanish to figure out which of the two provides the best value to a typical VPN user.

IPVanish charges more than TunnelBear if you sign up on a monthly basis. But its yearly subscription is priced lower ($47.89 vs. $59.88). So IPVanish will be easier on your wallet if you want to sign up for a longer term. But if you prefer shorter commitments – and many people do – then TunnelBear is the better option for you (and your wallet).

TunnelBear provides more extra features to its users, like browser extensions and ad blocking. But IPVanish supports manual configurations for Linux and routers, while TunnelBear does not. So things even out in the end.

Both providers also support split tunneling. But with IPVanish, it’s only supported on Android and FireTV. TunnelBear supports the feature through what it calls Splitbear, and both providers have implemented the feature differently. With IPVanish, you select which apps go through the VPN and which ones go through your ISP connection. With TunnelBear, you specify a list of websites that will go through your ISP connection instead of the VPN, so it’s a bit more limited compared to IPVanish.

Looking at the numbers above, IPVanish has a slight edge over Tunnelbear in terms of speed – it scores higher in all regions. But the difference in speed isn’t night and day. Tunnelbear’s speeds are still very good and will be fast enough for the vast majority of users. While IPVanish got better results in its speed tests, both providers provide excellent speeds. You’re unlikely to feel a speed hit from either provider in your everyday online activities.

Check out our list of the fastest VPNs for the top-performers in this category.

Neither of these providers offers anything to write home about regarding streaming. Both support streaming, but their support is limited to just a few services.

Using TunnelBear, we could only access Amazon Prime Video, All4, and ITV Hub. That’s far from the best we’ve seen. IPVanish was able to access Netflix US and HBO Max. So if streaming over VPN is important to you, you may want to skip over both of these providers.

IPVanish used to work in China using a manual connection rather than the official IPVanish app. But China is actively blocking IPVanish IP addresses, and the company now states that even a manual connection is unlikely to be successful. So if you’re looking to use a VPN from China, IPVanish won’t be your best bet.

TunnelBear, on the other hand, claims to work in China. It manages to bypass the Great Firewall by using an obfuscation feature it calls GhostBear. GhostBear “disguises” your VPN traffic to make it look like ordinary non-VPN traffic to avoid being blocked. It should be noted that GhostBear is only available for macOS, Windows, and Android. iOS users should look elsewhere.

Take a look at our list of VPN providers that work in China.

Both providers’ desktop apps are well-designed and intuitive. Greener VPN users shouldn’t feel intimidated by either one.

IPVanish’s app is easy to navigate and understand, with navigation icons on the left side of the app. Server selection is list-based; you can choose your server by country or city. You can create a subset of your favorite servers or let the app connect you to the fastest server automatically. 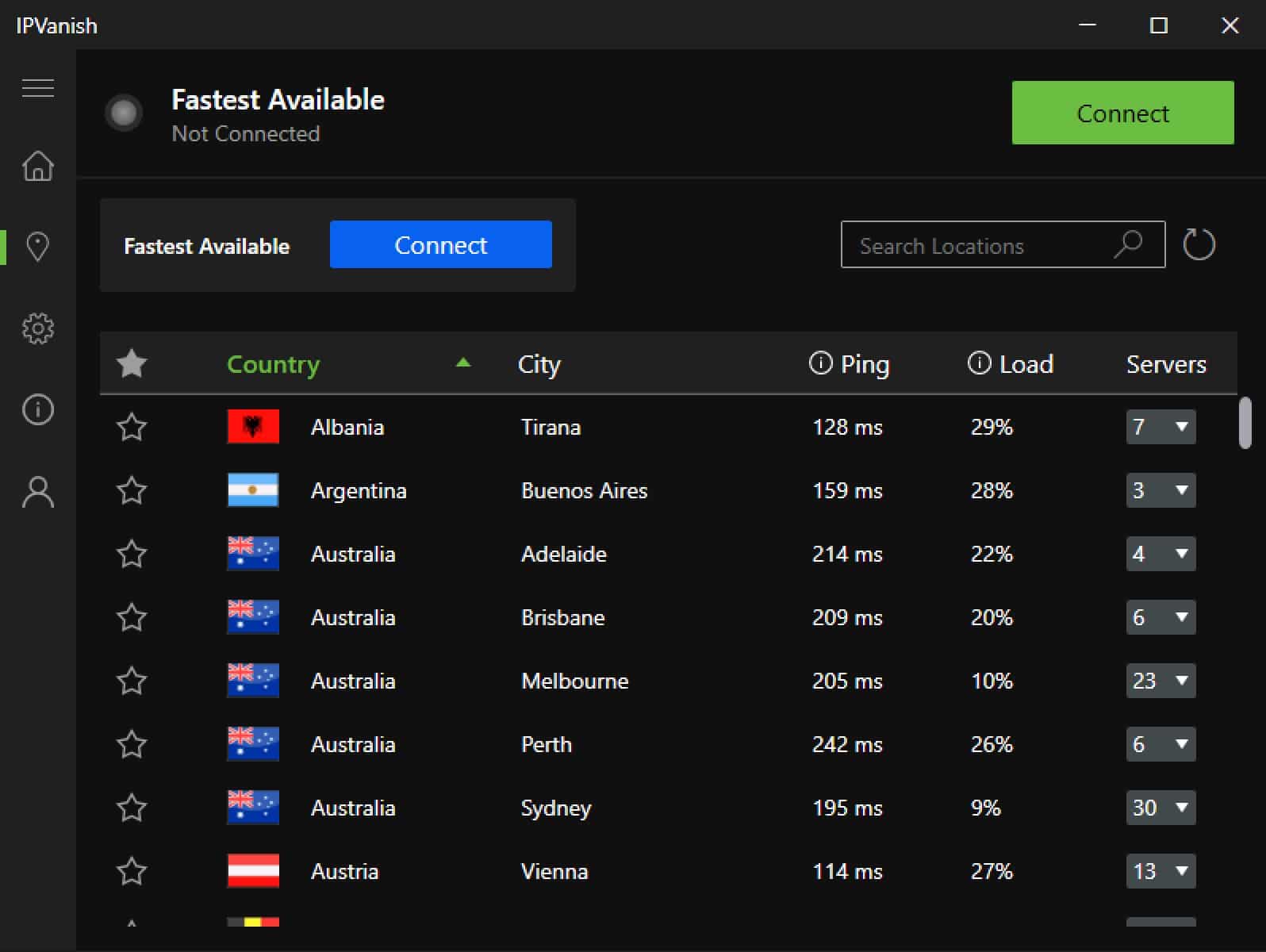 TunnelBear’s desktop app is very user-friendly – even more so than IPVanish. It also displays navigation icons on the left side of the app, and its approach to server selection is list-based as well. TunnelBear also provides the option of connecting to the fastest server available automatically. 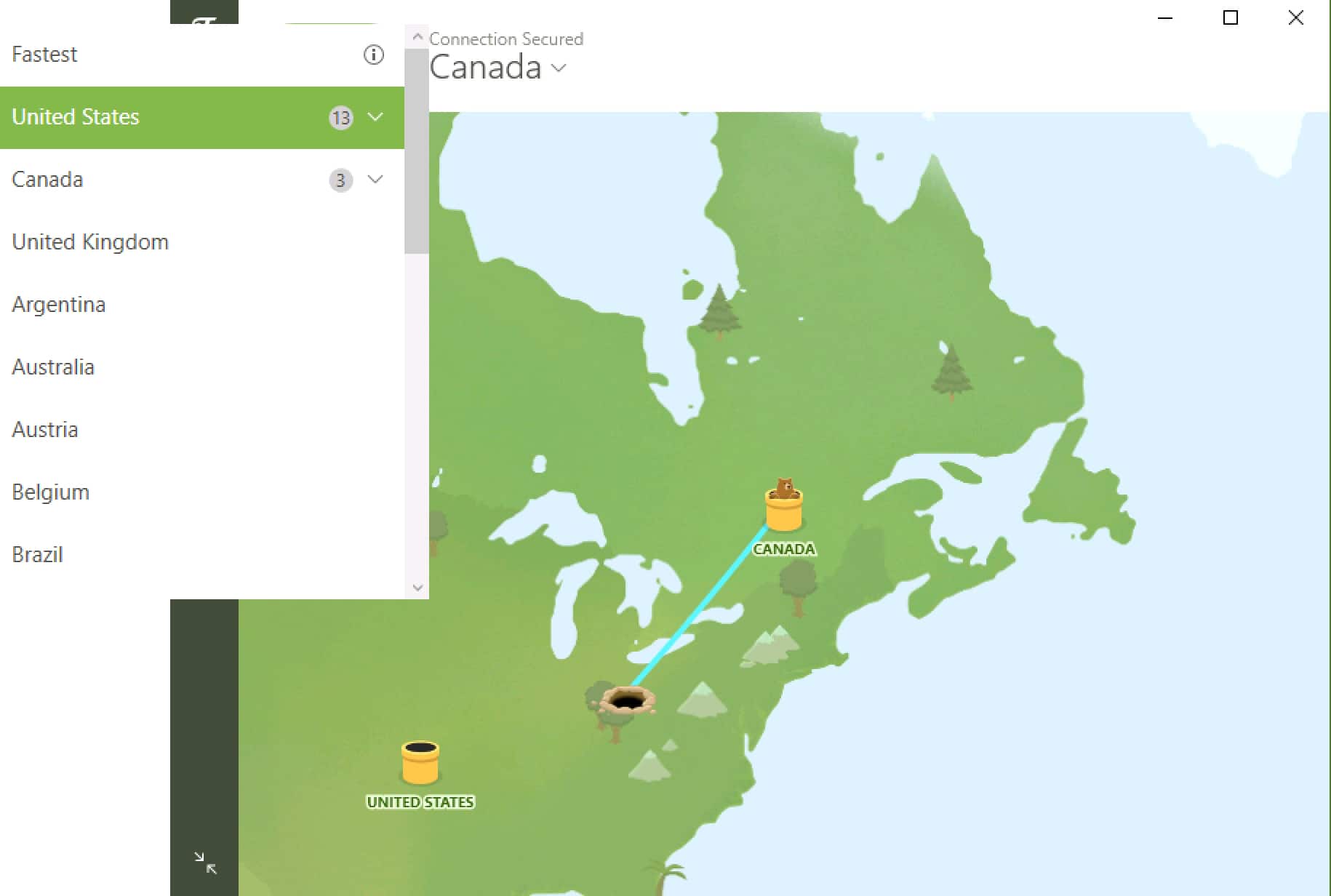 Though they have different looks, both apps are pretty similar.

Both apps allow you to customize your settings. But there’s nothing too technical in either app’s Settings page.

Both IPVanish and TunnelBear make mobile apps for iOS and Android. And both providers’ mobile apps are well-designed and intuitive, like their desktop counterparts, but designed for smaller screens.

While TunnelBear doesn’t disclose the actual number of servers it hosts, we can still see that IPVanish’s VPN network is larger. So if you prefer VPN providers with massive networks, IPVanish would probably be your choice here.

Below is a table listing all the countries where each provider hosts VPN servers: 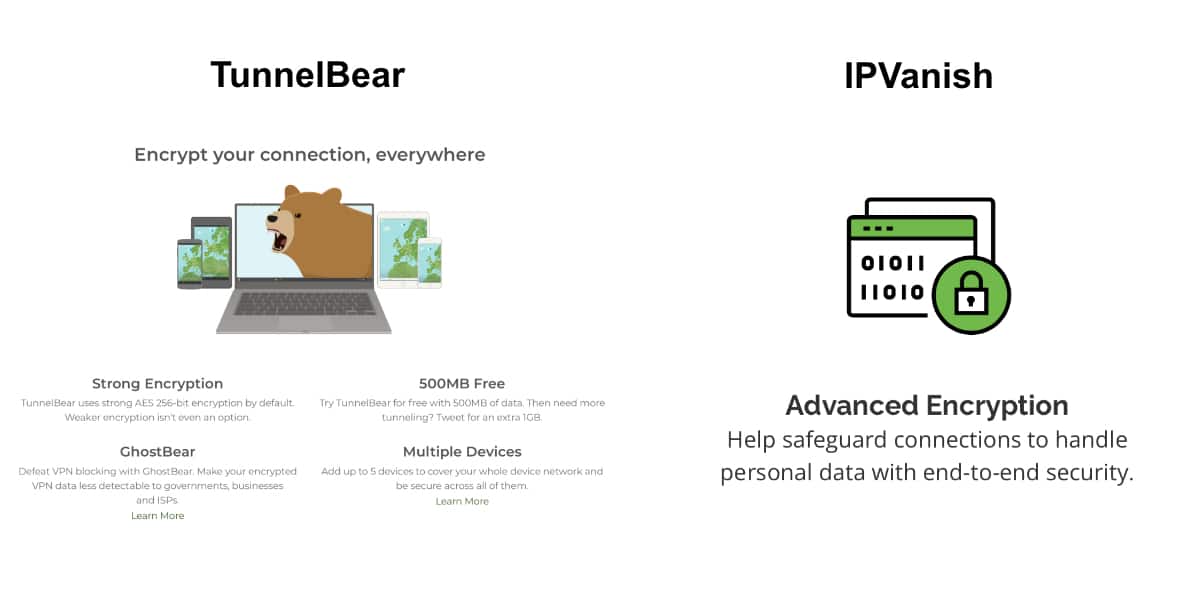 Again, both providers provide a kill switch in their apps and use their own DNS servers within the VPN tunnel. It’s a draw regarding security.

IPVanish is based in the United States, which can be problematic for some. While there aren’t any mandatory data retention laws in the US, the country is part of the Five Eyes. So the “privacy-first” VPN crowd may be put off. Thankfully, IPVanish has an excellent privacy policy and actively strives to collect as little data on its users as possible. It also owns and maintains all of its VPN infrastructure, which can be a plus for privacy and security. I wouldn’t have a problem signing up for its service.

TunnelBear, for its part, is based in Canada, another Five Eyes nation. Also, contrary to what some might believe, Canada is not the best jurisdiction for data privacy. In recent years, the Canadian government has passed legislation giving it the authority to collect all sorts of data on its citizens. But TunnelBear’s privacy policy is also robust, and you can sign-up with a disposable email (as you could with IPVanish) and pay using bitcoin.

As they should, both IPVanish and TunnelBear provide shared IP addresses to their users on all servers. However, only TunnelBear provides its users with an ad blocker. TunnelBear’s ad blocking works through DNS blackholing. As you access sites on the internet, your DNS requests are referenced against a blocklist of known ad networks. Whenever your device issues a request that matches the blocklist, that connection gets blocked. I use DNS blackholing all the time.

IPVanish and Tunnel provide email support only. Both providers’ websites also include a searchable knowledge base and several FAQs. The most common questions users are likely to have are answered in the FAQs.

To test each provider’s response time with Support emails, we sent them each three questions in three separate emails. The first two questions are pretty generic and probably get asked very often. So for those questions, we’re expecting canned responses – and there’s nothing wrong with that. The third question is purposefully more challenging to answer and requires an understanding of how VPNs work to answer it. We also wanted to assess how knowledgeable each provider’s representatives are.

The results are below:

All of my emails were answered by both providers. And they both provided answers that were polite, informative, and to the point. But IPVanish replied to my inquiries much faster than TunnelBear. TunnelBear nonetheless replied in under 24 hours (and even under 12 hours), so I still consider that excellent support.

They both also asked me if there was anything else they could help me with in each response. And they both sent follow-up emails to rate my experience with their respective cupport departments. So, in my view, both providers offer excellent support – though IPVanish was quicker. 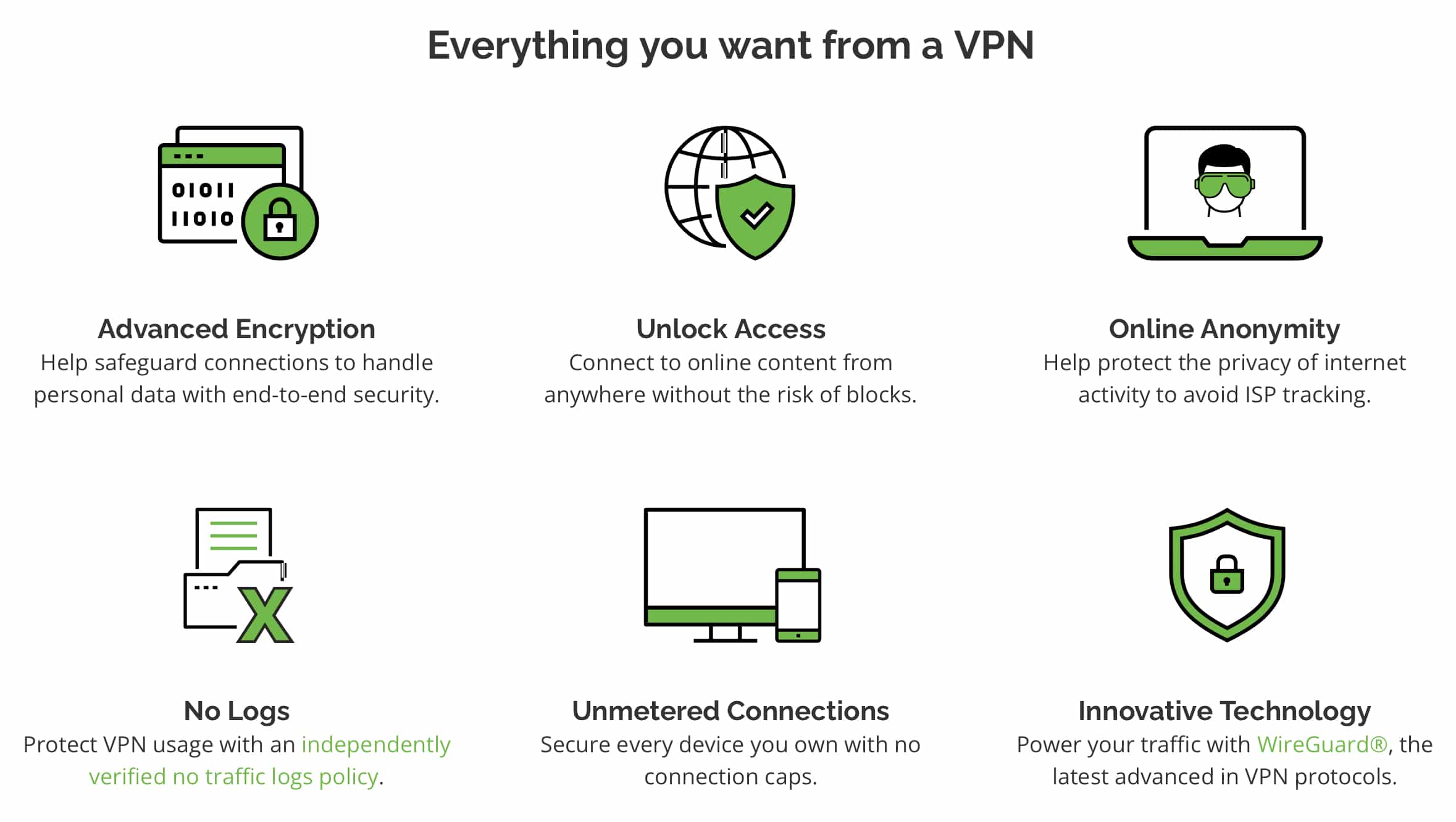 But that’s not to say that TunnelBear doesn’t have any standout features – it does. TunnelBear provides its users with an ad blocker and also accepts Bitcoin payments. It’s just that these minor differences aren’t enough to put TunnelBear over the edge.

Again, these are two excellent VPN providers, and you could do much worse than either of them.