How to unblock Google Play Store from China

The Google Play Store is one of many services that’s blocked in mainland China. However, it’s possible to access this app with the right Virtual Private Network (VPN). Read on to find out which VPNs are best at unblocking the Google Play Store in China.
Ian Garland Streaming, Kodi and VPN Expert 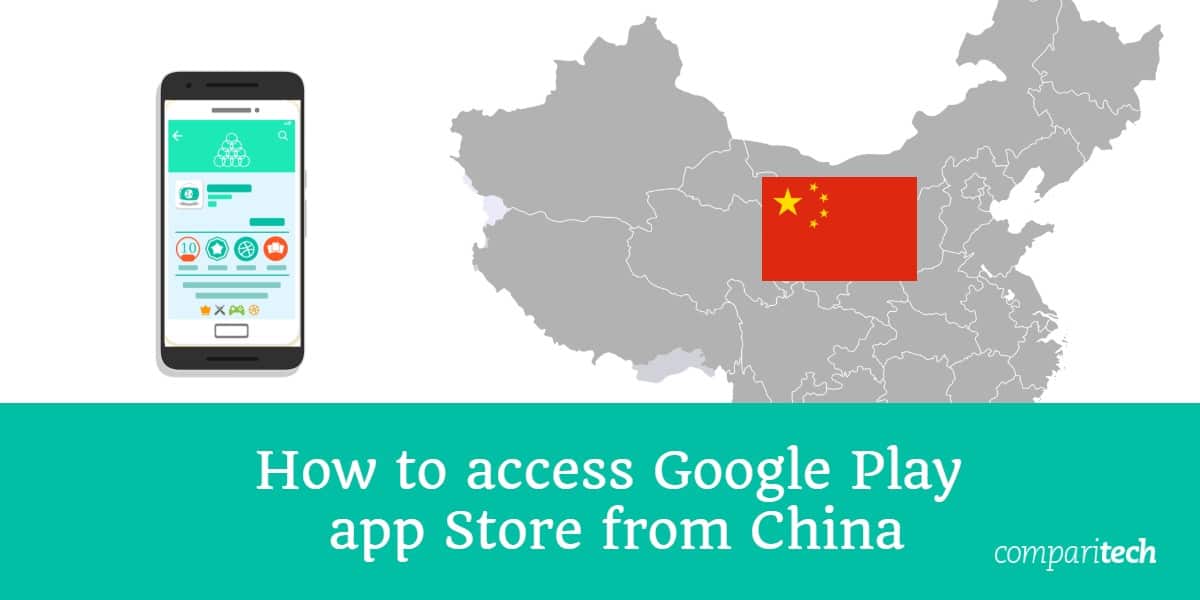 China has some of the most stringent and far-reaching internet restrictions in the world. In fact, the government blocks access to not just the Google Play Store in China, but also services you use every day like Facebook, Skype, and YouTube. This makes it difficult to stay in contact with your friends and family back home, which presents a real problem given the ongoing issues that the country is facing.

It is possible to bypass China’s online restrictions with a VPN, but most of these are blocked and only a few still work reliably. On the plus side, these don’t just let you use the internet freely in China; they also encrypt your traffic, preventing any snoopers from seeing what you get up to online, and greatly enhancing your privacy.

How to unblock the Google Play Store in China

Here’s how to unblock the Google Play Store in China:

It’s often difficult to decide which VPN to use, but China’s sweeping surveillance raises the stakes even higher. We’ll go into more detail about our recommended VPNs below but here’s an at-a-glance look at our top picks.

Best VPNs for unblocking the Google Play Store in China:

To ensure that you get a reliable, versatile service, and not just one that works in China, we’re only recommending VPNs that meet all of the criteria below:

Below is a short review of each VPN capable of unblocking the Google Play Store from China. Read on to find out which is the best VPN to suit your needs.

ExpressVPN is a great choice for anyone looking to access the Google Play Store in China. It reliably bypasses the Great Firewall, offers access to 3,000+ servers in over 90 countries, and is fast enough for flawless streaming. What’s more, this VPN allows you to connect up to five devices at once, meaning you can browse safely wherever you go.

This service uses 256-bit AES encryption, a kill switch, and protection against DNS, IPv6, and WebRTC leaks to keep your activities private at all times. You can choose to let certain apps through the VPN, for instance, if you want to watch Chinese TV and browse the Google Play Store without disconnecting and reconnecting the VPN constantly. This is known as VPN split tunneling.

ExpressVPN doesn’t log any personally identifiable information but if you’re concerned, you can always pay in Bitcoin for added privacy. 24/7 assistance is available via live chat.

ExpressVPN offers simple, user-friendly apps for iOS, Android, Windows, MacOS, and Linux. It also has custom firmware to help simplify the process of installing it on your home router.

BEST VPN FOR CHINA:ExpressVPN offers consistently high speeds, powerful security features, and the ability to unblock the Google Play Store while in China. What’s more, this service includes a 30-day money-back guarantee so you can try it completely risk-free.

Check out the full ExpressVPN review for more information.

NordVPN has a huge network, with more than 5,000 servers spread across 58 countries. This all but guarantees you a high-speed connection, making it ideal for streaming, video calls, or large downloads. NordVPN not only works in China, but it also unblocks major services like Netflix US, Facebook, and Skype. With up to six simultaneous connections permitted, you can secure most of your devices at the same time.

Security is this VPN’s specialty. It uses WebRTC, IPv6, and DNS leak protection, a customizable kill switch, automatic malware-scanning, and 256-bit encryption to prevent snoopers from monitoring your activities. Additionally, it lets you connect to obfuscated servers that are specifically designed for bypassing web restrictions in countries like China and the UAE. NordVPN accepts cryptocurrency payments and keeps no logs, so your privacy is in good hands. You can reach customer support 24/7 over live chat in case of any issues.

BEST LOW-COST VPN: NordVPN puts your security first, but it also provides reliable high-speed connections, a no-logs policy, and above-average unblocking ability at an affordable price. In fact, this service even comes with a 30-day money-back guarantee.

Interested? Why not take a look at our complete NordVPN review?

PrivateVPN is among the fastest services we’ve tested, which makes it perfect for anyone looking to download large apps from the Google Play Store. This service is excellent at unblocking and works well in China, so there are very few limits on what you’ll be able to access. Further, with a six-connection limit, you’ll be able to secure all of your most commonly-used devices.

This VPN offers 256-bit encryption, DNS and IPv6 leak protection, and a kill switch that stops sending traffic immediately any time you lose your connection suddenly. There’s also a stealth mode that lets you bypass strict online blocking like the kind used by the Chinese government. PrivateVPN is a zero-logs provider, so there’s no need to worry about having details of your activities revealed. Live chat-based support is available 22 hours per day, just in case you have any problems.

PrivateVPN apps are available for Android, MacOS, iOS, Windows, and Linux. If you’d prefer, you can manually configure it for use with your wireless router.

ZERO LOGS PROVIDER:PrivateVPN is one of the fastest services we’ve tested and it doesn’t keep any logs at all. With strong security features, exceptional unblocking ability, and a 30-day money-back guarantee, it’s a solid way to access the Google Play Store abroad.

Read our comprehensive review of PrivateVPN.

Surfshark is a highly versatile VPN. This VPN works in China, has more than 1,000 servers spread across over 60 countries, and allows you to connect all of your devices simultaneously. Better still, this service unblocks a huge range of popular platforms abroad, including Netflix US, BBC iPlayer, and Amazon Prime Video.

It doesn’t skimp on security features, either. In fact, with 256-bit AES encryption, protection against IPv6, WebRTC, and DNS leaks, a kill switch, and a combination malware-scanner and ad-blocker, you’re very well protected. Surfshark’s NoBorders mode lets you bypass Chinese internet blocking and access services that usually block VPN traffic outright. This service doesn’t log any data that could identify you and accepts Bitcoin, Ethereum, and Ripple payments. If you’re having problems, you can reach support 24/7 over live chat or email.

Surfshark has MacOS, iOS, Windows, Android, and Linux apps. This VPN also works with select network routers, but you’ll have to install it manually.

BROWSE WITHOUT LIMITS:Surfshark unblocks plenty of services (including the Google Play Store) and allows you to secure all of your devices simultaneously. This service boasts numerous security and privacy features, as well as a 30-day money-back guarantee.

Hotspot Shield is a strong, affordable option for anyone looking to browse the Google Play Store while in China. It has over 3,000 servers in more than 80 countries, and can even unblock some of the more stubborn platforms like Netflix and Amazon Prime Video from abroad. This VPN allows users to connect up to five of their devices at once.

This service keeps your internet traffic private using a combination of a kill switch, DNS and IPv6 leak protection, and 256-bit encryption. If you’d like, you can allow certain apps to pass through the VPN, or tell the app to connect automatically any time you use a public wifi network. Hotspot Shield deletes all personally identifiable data when your session ends, so there’s no chance of having your activities traced back to you. Need help? Customer support is on-hand via 24/7 live chat.

VERY HIGH SPEEDS:Hotspot Shield offers high speeds, strong security, and the ability to unblock the Google Play app store from anywhere, even China. As if that wasn’t enough, it comes with a 45-day money-back guarantee.

We cover this VPN in greater detail in our complete Hotspot Shield review.

Can I bypass Chinese internet restrictions with a free VPN?

There are plenty of free VPNs on the market, but we don’t recommend using them, and especially not when in China. For a start, these services often struggle to unblock everyday geo-restricted platforms like Netflix and BBC iPlayer, so they have effectively no chance of beating the Chinese government’s cutting-edge web-filtering. Even if you find one that works, free VPNs often have more users than their networks can support, which leads to painfully slow speeds; not exactly what you want when downloading apps.

You should also be aware of the security risks that free VPNs pose. A study of over 200 such apps found that malware was present in nearly 40 percent of them. Perhaps even more concerning, almost one in five never used any encryption, which means that they’re no more secure than browsing normally. Threats come in many forms, though; we’ve even a major provider (Hola) sell user bandwidth for use in a botnet.

The best way to protect yourself online is to use a reputable VPN with a no-logs policy and a history of standing up for its users’ privacy.

Can’t I just use one of the China-specific app stores?

Although the Google Play Store is blocked, China does have plenty of alternatives. However, there are several problems with marketplaces like Baidu, Tencent App Store, Huawei App Store, and Xiaomi.

The first (and most obvious) issue is that these app stores likely won’t have the apps you want. They may offer imitations, but unless you can read Chinese, many of these will be useless to you. Additionally, without knowing how these marketplaces vet prospective apps, it’s difficult to know if what you’re downloading is really safe or not.

Finally, as the government monitors all online activity, you could find yourself in hot water if you inadvertently search a China-approved app store for flagged terms like “VPN” or “Facebook”.