How to Watch Atresplayer Abroad (Outside Spain) with a VPN

Atresplayer is a Spanish streaming platform that offers plenty of great free-to-watch content. The catch is that it’s only available in Spain. Fortunately, we can show you how to watch Atresplayer abroad by using a VPN.
Mark Gill TECH JOURNALIST, VPN AND PRIVACY SPECIALIST 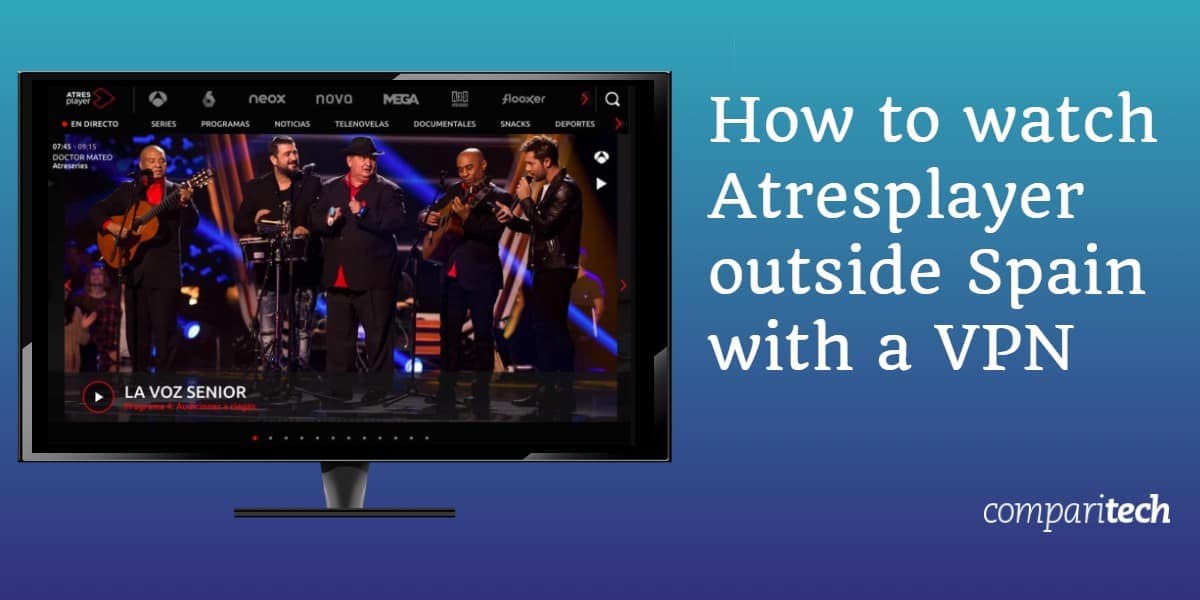 Short for Virtual Private Network, a VPN allows you to access region-locked content from anywhere as well as browse the web with a greater degree of anonymity. It does this by sending your internet traffic through an encrypted tunnel to servers elsewhere in the world. By connecting to a VPN server in Spain, for instance, you can obtain a Spanish IP address. This will make it appear as if you’re browsing the web from Spain, allowing you to watch Atresplayer abroad.

How to watch Atresplayer with a VPN

Setting up and using a VPN is much quicker and easier than you might think! Here’s what you’ll need to do in order to use a VPN to watch Atresplayer outside Spain:

To watch Atresplayer abroad with a VPN:

No two VPNs are quite the same, with some offering faster speeds and others more comprehensive security. We found the best VPNs for Atresplayer by selecting only those that met the following criteria:

Don’t have time to read the full article just yet? Here’s a short summary of the best VPNs to watch Atresplayer outside Spain:

Here’s our full list of the best VPNs for streaming your favorite Atresplayer content from outside Spain:

NordVPN has roughly 60 servers in Spain, which makes it easy to unblock Atresplayer from abroad. What’s most impressive is that it has a network of more than 5,000 servers worldwide. Having so many servers means less load and improves your chances of finding the right server for browsing or streaming. This VPN allows up to 6 simultaneous connections per account and works with Netflix, Amazon Prime Video, and BBC iPlayer.

You have the option of contacting NordVPN’s 24/7 live chat support should you have any issues. However, the apps and browser extensions are user-friendly, offering the option to quickly connect to a server and search by country or server load. This VPN offers plenty of features to ensure your online security including 256-bit AES encryption and protection from DNS and IPv6 leaks. You’ll also find a kill switch, strict no-logs policy, and servers optimized for enhanced privacy.

Surfshark is a service that’s packed with interesting features. In particular, it lets you connect an unlimited number of devices simultaneously. Overall, it has around 3,200 servers in 65 countries, including Spain. You can use its Barcelona and Madrid-based servers to watch Atresplayer abroad. In fact, this VPN also works with many US-based streaming platforms such as Netflix and Amazon Prime Video.

You have plenty of choice as to how you browse the web with Surfshark. For example, you can choose to use the service’s MultiHop feature which is its version of a Double VPN for enhanced privacy. There’s also the option to block adverts and whitelist certain sites and apps so they can bypass the VPN. Surfshark uses 256-bit AES encryption and DNS and IPv6 leak protection. This no-logs VPN also has a kill switch and lets you pay in cryptocurrency for added anonymity.

BEST BUDGET VPN:Surfshark is a low-cost VPN that lets you watch the likes of Atresplayer, Netflix, and Amazon Prime Video. Connect an unlimited number of devices simultaneously. 24/7 support and a true no logs policy. 30-day money-back guarantee.

ExpressVPN offers fast, reliable servers in Barcelona and Madrid for uninterrupted streaming on Atresplayer. This VPN claims to have 99.9% uptime and having tested the servers extensively, we never experienced a single dropped connection. You can also use ExpressVPN to unblock popular streaming services including Netflix and Amazon Prime Video. That’s because it has an extensive network of over 3,000 servers in 94 countries.

Aside from being fast and reliable, ExpressVPN offers a high level of convenience to its users. This is evident in the extensive selection of apps and browser extensions which are extremely easy to use, even for beginners. One of the best features of this VPN service is its customer support which is fast, friendly, and available 24/7 via live chat and email.

When it comes to security, ExpressVPN offers 256-bit AES encryption, DNS and IPv6 leak protection, and a kill switch. What’s more, it doesn’t log any personally identifiable data, guaranteeing your privacy. You also have the option to sign up semi-anonymously with a throwaway email address and by paying in Bitcoin (though you’ll need to use a Bitcoin mixing service in order to enjoy full anonymity).

STRONG UNBLOCKING ABILITY:ExpressVPN has plenty to offer including speedy servers, strong security features, and the ability to unblock Atresplayer from anywhere. Also comes with a 30-day money-back guarantee.

CyberGhost is worth your consideration because it offers more servers in Spain than most VPNs on the market. Overall, it has 120+ servers in Barcelona and Madrid and a total of almost 7,000 globally. Aside from watching Atresplayer abroad, you can use this VPN to watch Netflix US and BBC iPlayer. Servers are fast and connections consistent, making it ideal for streaming. You’re unlikely to encounter lag or buffering, even when streaming live 1080p video.

You can use CyberGhost to secure up to 7 devices simultaneously which is great if you’re looking to protect a whole household. CyberGhost’s apps couldn’t be simpler to use but this service offers live chat support, 24/7, just in case. This service has a strict no-logs policy. Your data is protected from DNS and IPv6 leaks and secured with 256-bit AES encryption. There’s also an automatic kill switch which prevents your data from being leaked should the VPN connection drop.

CyberGhost can be used via the apps for Windows, Linux, Mac, Android, iOS, Amazon Fire Stick/ Fire TV, and Android TV. Browser extensions are offered for Chrome and Firefox. Manual installation is required for routers.

FLAWLESS STREAMING:CyberGhost has fast servers for streaming Atresplayer as well as Netflix US. Up to 7 simultaneous connections. Beginner-friendly apps and browser extensions. Secures your data with encryption and no-logs policy. 45-day money-back guarantee.

IPVanish unblocks Atresplayer outside Spain with its servers in Madrid and Valencia. It offers high speeds, meaning you’ll be able to stream as much as you like, free from buffering or lag. IPVanish has a network of 1,300 servers in around 60 countries. IPVanish is known to be particularly easy to use with Kodi and Amazon Fire Stick. What’s more, you can use it to protect any number of devices simultaneously which is ideal if you’re planning on sharing this VPN with family.

Live chat support is available 24/7 should you need any help. The staff are usually fast and helpful in answering any queries you might have. However, the IPVanish apps aren’t complicated to use and allow you to search for servers in a number of ways, including by region and server latency. This VPN service has a no-logs policy, kill switch, and uses 256-bit AES encryption. You’re also protected from DNS and IPv6 leaks.

STREAMING-FRIENDLY:IPVanish works well with Amazon Fire Stick as well as Kodi. Use it to unblock Atresplayer across all of your devices. Strong security and no-logs policy protect your privacy. Provides a 30-day money-back guarantee.

PrivateVPN stands as one of the fastest VPNs around. This makes it perfect for streaming Atresplayer overseas. With a smaller network of around 150 servers in 60 countries, this VPN appears to place an emphasis on quality rather than quantity. You can use it to unblock most geo-locked content be it Netflix, Amazon Prime Video, or Hulu. Streaming is typically seamless without buffering or lag thanks to the fact that PrivateVPN doesn’t limit user bandwidth or speed.

First-time VPN users typically appreciate the simple, easy-to-follow design of PrivateVPN’s desktop and mobile apps. This service includes live chat support and lets you connect up to 6 devices simultaneously, all of which are assigned unique IP addresses. PrivateVPN is headquartered in Sweden and uses 256-bit AES encryption, DNS and IPv6 leak protection, and a kill switch. This is a no-logs VPN that states that it doesn’t know what its users are doing online.

Can I use a free VPN to watch Atresplayer abroad?

We haven’t found the geo-restrictions on Atresplayer to be too strict so most VPNs should be able to unblock the platform. However, while free VPNs may be able to unblock Atresplayer, the quality of streaming will be noticeably inferior to that of the best paid VPNs. The reason for this is that free VPNs typically have relatively few servers and too many users to cope with. Some free VPN services even restrict the bandwidth of their users in an effort to manage this.

Aside from a lot of buffering and lag when streaming videos, free VPNs simply aren’t very good at unblocking the most popular region-blocked content. This includes streaming services such as Netflix, HBO Go, and BBC iPlayer. Free VPNs also lack security, with many failing to secure your data with encryption. Some log your data and browsing activity (even if they say otherwise) and sell the information to third parties. Instead of using a free VPN, you could opt for a free trial of one of the VPNs mentioned in this list.

What can I watch on Atresplayer?

Atresplayer includes various Atresmedia content from channels such as Antena 3 and La Sexta. Here are just some of the TV shows you can watch on Atresplayer: