How to watch Euphoria Season 2 online

Want to stream Euphoria season 2 online? The show will premiere on HBO Max, which means you’ll need a VPN to watch it outside the US. We explain how and recommend the best VPNs.
Ray Walsh VPN and privacy expert 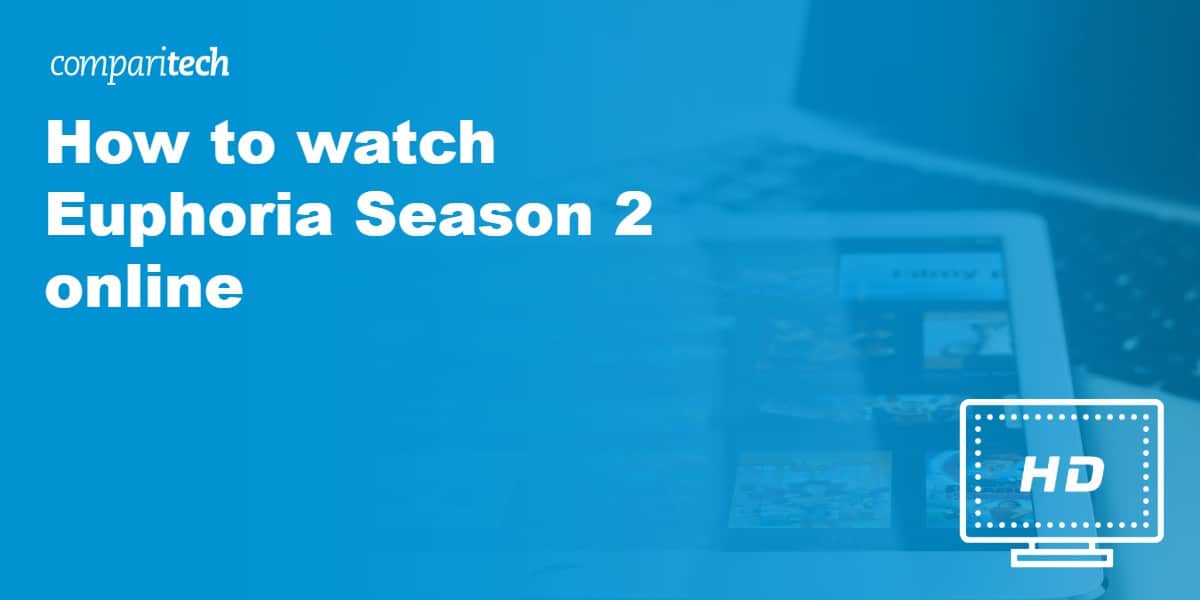 Season 2 of the popular coming-of-age drama Euphoria is finally returning to HBO. Fans of the show from around the globe are wondering how to stream it online. Unfortunately, HBO Max is blocked outside of America, and Euphoria does not have a release date in many countries. This means you will need a VPN to stream Euphoria season 2 if you’re currently traveling outside the US.

A Virtual Private Network, or VPN, works by concealing your IP address from the websites you visit. By connecting to a server in the US, you can get an American IP address. This lets you access HBO Max (and other streaming platforms that carry HBO) while on vacation.

Not all VPNs work to stream HBO Max around the globe, so you must pick carefully. In this guide, we have recommended VPNs that are ideal to watch Euphoria while traveling abroad. Scroll down to find out how to use a VPN to stream your home services from abroad, and for details on where to stream Euphoria season 2 online.

How to watch Euphoria season 2 with a VPN

Using a VPN to access HBO Max on vacation is easy as long as you subscribe to a VPN that has fast servers in the US. That said, not all VPNs work with US streaming services, so you must pick carefully.

You can use the guide below to get a subscription with a VPN that is known to work with HBO Max. As a result, you can easily watch Euphoria from anywhere in the world.

Here’s how to watch Euphoria Season 2 online from anywhere:

As soon as your VPN connects to a server in the US, you will receive an American IP address. This will let you watch Euphoria while on vacation abroad. If you suffer any problems streaming Euphoria, contact your VPN to find out which US server is optimized for streaming. Also, clear the cookies and cache in your browser to ensure HBO can’t detect your real location.

If need to take out a new HBO subscription, you will need a valid American payment method. Thankfully, you can buy a HBO gift card that is delivered via email. Thus, you can pay for a subscription to HBO Max from abroad. Remember to connect to a VPN server in the US when you redeem the voucher on HBO’s website and when you log in to stream Euphoria.

WANT TO TRY THE TOP VPN FOR THE EUPHORIA RISK FREE?

NordVPN is offering a fully-featured risk-free 30-day trial if you sign up at this page. You can use the VPN rated #1 for HBO Max without any limits or restrictions for a month—great if you want to watch Euphoria outside of the US.

When is the Euphoria Season 2 release date?

Euphoria season 2 will premiere on HBO Max on January 9 at 9 PM ET. Each subsequent episode will drop a week later on Sunday at the same time. In the UK, the show will have a simultaneous release on Sky Atlantic on January 10, 2022. Anybody outside of those two countries will be able to access those streams by connecting to a VPN server in the US or the UK. NordVPN offer a 30 day money back guarantee so you can try it risk free.

How many episodes of Euphoria will there be in Season 2?

Fans of Euphoria may be a little disappointed to hear that the second season will again feature just 8 episodes. However, each episode is expected to be between 45 minutes and an hour long, which means there is plenty of action to look forward to!

Where can I stream Euphoria online?

Anybody wanting to stream Euphoria in the US will need to have a subscription to HBO Max. This is the only platform in America that will be carrying Euphoria when it premieres. However, to help you out, we have included some other international streaming options below. You can use a VPN server in the respective country to access that stream instead of HBO Max if you prefer.

How can I stream Euphoria in the UK?

UK residents are fortunate because Euphoria season 2 is getting a simultaneous release. Anybody who is not currently a Sky subscriber and wants to stream Euphoria on Sky Atlantic can do so by using the streaming service NOW TV.

NOW TV is available without a recurring contract and will provide you with access to Sky Atlantic from anywhere as long as you connect to a UK VPN server. Just remember that only a few VPNs work to stream NOW TV, so be sure to stick to our recommendations.

Can I stream Euphoria in Canada?

Unfortunately, HBO Max is not currently available in Canada. In addition, there is no official release date for Euphoria season 2 in Canada as yet. This means that you will need to connect to a VPN server in the US to stream the new season of Euphoria on HBO Max.

Other streaming options for Euphoria season 2

In addition to being available in the UK and America, Euphoria season 2 will get a simultaneous release in Saudi Arabia and Turkey on the OSN network. The first episode will air on January 10 at 9 PM. Euphoria will also be available on Disney+ Hotstar in India. In India, it will also premiere at 9 PM on January 10.

Anybody wanting to stream Euphoria on either of those streaming services will need to connect to a VPN server in Turkey or India. The good news is that our top VPN recommendation for Euphoria has servers in both of those locations.

Why is HBO Max restricted outside of America?

HBO Max restricts its service abroad to comply with licensing agreements with content producers and copyright holders. As a result, it automatically serves anybody who tries to access the HBO Max website from abroad an error message.

The good news is that HBO tracks users using their IP addresses. As a result, anybody can regain access to their account on vacation by connecting to a VPN server in America.

Can I use a free VPN to stream Euphoria season 2?

No. Although there are some free VPNs available on the market, they are not suitable for streaming shows on HBO Max or other streaming platforms. Free VPNs are massively oversubscribed and they have few servers. This makes them highly congested and causes them to be sluggish, which leads to high levels of buffering.

In addition to being slow, we do not know of any free VPNs that work to access HBO Max abroad. HBO has excellent tools for spotting and blocking IPS associated with VPNs, and free VPNs do not have the time or expertise to stay ahead of these blackouts. Luckily, the premium VPNs we have recommended make it part of their core mission to stay one step ahead of these blocks.

Finally, free VPNs are problematic in terms of privacy. They often harvest user data and sell it to third parties, such as marketing companies and data aggregators, to create a revenue stream. In addition, free VPNs have been found to contain severe vulnerabilities, DNS and IP leaks, and even spyware within their apps. This makes free VPNs a massive risk to your online health and is why we strongly recommend against them.

Luckily, our recommended VPNs have a trial period, which means you can actually get your money back and trial them risk-free for a month if you want to.

What do we know about season 2 of Euphoria?

Euphoria is the American remake of an original show produced in Israel. It portrays the lives of a group of teenagers as they struggle with coming of age.

The show is well known for portraying a number of serious topics such as drug-taking, sexuality, identity, and love. It has already won awards, including an Emmy for best lead actress for its female star Zendaya, in her role as a teen drug addict.

In season 2 of Euphoria, the plot will again center around Zendaya in her role as Rue. According to insiders, the show will continue tackling important contemporary teenage development issues.

In fact, according to Zendaya, the show will take viewers through a grueling storyline that could be hard to watch. The show’s creator, Sam Levinson, reinforced this observation, recently stating that the new season would be “brutal”.

What is the cast for Euphoria season 2?

The good news is that all the popular characters from season one are making a return n season 2 of Euphoria. We have included a full list of the cast below: