How to watch TVer abroad (outside Japan) with a VPN

Want to know how to watch TVer in the US? Or traveling outside of Japan and want to catch up with your favorite content? In this article, we'll show you how to watch TVer online from anywhere. With a VPN, you can unblock TVer outside Japan. We’ll even show you the best VPNs to use!
Mark Gill TECH JOURNALIST, VPN AND PRIVACY SPECIALIST 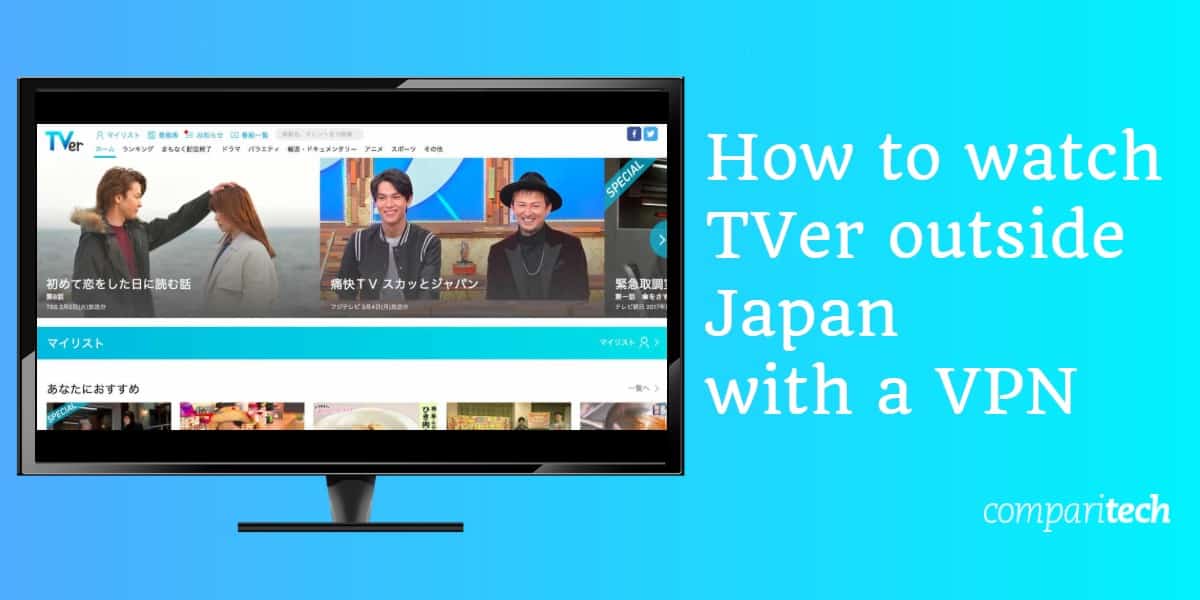 If you’re outside Japan and trying to access TVer, chances are you’ll come across the following message when trying to play content: “This video is restricted from playing in your current geographic region”. This means that TVer content is geo-restricted and only accessible in Japan (unless you use a VPN).

With a VPN (Virtual Private Network), you can watch TVer outside Japan. So how does a VPN work? Basically, connecting to a VPN encrypts your internet connection, redirecting it through a remote VPN server (in this case a server in Japan). This hides your IP address, which means that you can not only unblock geo-restricted content, but protect your online privacy.

How to watch TVer abroad with a VPN

Don’t worry, it’s easy to watch TVer outside Japan with a VPN. All you need to do is follow the steps below.

Here’s how to watch TVer from anywhere with a VPN:

We’ll go into detail covering the best VPNs to watch TVer abroad. However, if you’re short of time, here’s a quick list detailing our picks:

A number of factors should be considered when deciding the best VPN to watch TVer abroad. For this reason, we’ve explored many options and selected those that meet the following criteria:

Criteria for selecting the best VPN for TVer

Here’s our list of the best VPNs to watch TVer abroad (outside Japan):

ExpressVPN is the best VPN to watch TVer outside Japan. Fast and highly reliable, it lets you stream your favorite content without any hiccups such as lag and buffering. Aside from TVer, ExpressVPN also unblocks Netflix, Amazon Prime Video and BBC iPlayer among others. This VPN service has a network of more than 3,000 servers available in an impressive 94 countries.

You can use ExpressVPN on up to 5 devices simultaneously, allowing you to secure your most important devices. What makes ExpressVPN really stand out, however, are the user-friendly apps and browser extensions. These are ideal for beginners and make selecting and connecting to a server quick and easy. ExpressVPN offers 24/7 customer support via chat and email. Having tested this out ourselves, we can say it’s arguably the best customer support of any VPN.

Performance and usability are very important, but so is security. ExpressVPN also does well in this area. It has 256-bit AES encryption, DNS leak protection, a kill switch, and split tunneling. ExpressVPN is headquartered in the British Virgin Islands, which means it isn’t subject to data retention laws. Regardless, it doesn’t keep any identifying logs of users so you can surf the web with peace of mind.

ExpressVPN offers a wide range of apps. It’s available for Windows, Mac, Linux, Android, iOS and routers as well as on Chrome and Firefox as browser extensions.

BEST VPN FOR TVer:ExpressVPN is our top choice. ExpressVPN has fast servers for streaming TVer and Netflix. It’s easy to use, has excellent customer support and is highly secure with encryption. The 30-day money-back guarantee means you can try ExpressVPN risk-free.

NordVPN has a very impressive 98 servers in Japan at the time of writing. Needless to say, that’s ideal for watching TVer abroad. Indeed, NordVPN excels at unblocking geo-restricted content, be it Netflix Japan, Amazon Prime Video, or ESPN. NordVPN has over 5,400 servers, which is far more than most VPNs. Servers are fast for browsing and streaming movies and TV shows in high definition. You can use NordVPN on up to six of your devices simultaneously, making this a great value option for watching TVer abroad.

We can recommend NordVPN to anyone because it’s very accessible and easy to use. The apps are well-designed and responsive, though you can always get in touch with NordVPN’s 24/7 live chat support if you need it. Security-wise, NordVPN offers specialty servers which include Double VPN and Onion Over VPN. It also uses 256-bit AES encryption, a kill switch, and offers DNS leak protection. Your data and activity remain private to you thanks to a strict no-logs policy.

You can find NordVPN apps for Windows, Mac, Linux, Android, iOS, and Android TV. Browser extensions are offered for Chrome and Firefox. There’s no app for routers, which requires manual setup.

BEST FOR THE BUDGET:NordVPN has 98 servers in Japan and over 5,000 worldwide. Unblocks TVer and Netflix. User-friendly apps, 24/7 support and a strict no-logs policy. 30-day money-back guarantee.

CyberGhost has a rapidly growing network of servers that stands at 3,650 at the time of writing. 32 of those servers are located in Japan, which means you’ll be able to unblock TVer outside Japan with ease. Connections are consistent and the fast speeds are ideal for streaming. In fact, CyberGhost can unblock the likes of Netflix US and Amazon Prime Video. What’s more, you can use this VPN on up to 7 devices at once, an excellent value.

Plenty of features are available when you open the user-friendly apps. There you’ll find an ad-blocker, the option to force HTTPS, compress data and more. We’re very impressed by the level of security offered by CyberGhost, which uses 256-bit AES encryption to protect your data. There’s also DNS leak protection, a kill switch, and a no-logs policy. Headquartered in Romania, CyberGhost isn’t subject to any mandatory data retention laws, which is another big plus in terms of your privacy.

32 SERVERS IN JAPAN:CyberGhost unblocks TVer and has 32 servers in Japan. Use it on up to 7 devices simultaneously. Strong security with encryption, kill switch and no logs policy. 30-day money-back guarantee.

IPVanish has servers in Tokyo and more than 1,200 servers in 60 countries worldwide. We’ve successfully used IPVanish to watch TVer abroad and found it worked well with no problems of lag or buffering. Unlike many ISPs, IPVanish is a VPN service that offers unlimited bandwidth with no throttling of your connection. What we particularly like about IPVanish is that it can be used on up to 10 devices simultaneously which is great value.

This is a VPN service that is simple to use. The user-friendly design of the apps means selecting and connecting to a server takes seconds. Searching and filtering servers is easy, and you can even save your favorite servers. IPVanish has all of the important security features expected of a quality paid VPN. This includes 256-bit AES encryption, DNS leak protection, a kill switch, and a no-logs policy.

IPVanish apps are offered for Windows, Mac, Android, iOS and Amazon Fire TV. It can also be used on Linux and routers but manual setup is needed.

UP TO 10 CONNECTIONS:IPVanish has servers in 60 countries, including Japan. Unblocks TVer. Connect up to 10 devices simultaneously. Easy to use and has a no logs policy. 7-day money-back guarantee.

PrivateVPN is a smaller VPN service that is well worth your consideration thanks to its high-speed servers. With unlimited bandwidth and speed, we think that this is a great VPN for streaming TVer as well as the likes of Netflix Japan and Amazon Prime Video. PrivateVPN has around 100 servers in 59 countries, including Japan. You can use it on up to six devices at the same time, which is more than many VPNs allow.

In terms of PrivateVPN’s apps, we find them to be quick and easy to use. The presence of both simple and advanced menus means that anyone can use this VPN. Interestingly, while PrivateVPN’s live chat support isn’t available 24/7, any communication you have is with the developers rather than third party reps. This was evident in our interactions with them in which they were highly knowledgeable and helpful. This is a safe VPN and offers 256-bit AES encryption, a kill switch, DNS leak protection and a secure no logs policy.

You can use PrivateVPN via the apps for Windows, Mac, Android, Fire TV, and iOS. Manual setup is required for routers as well as Linux.

GREAT FOR STREAMING:PrivateVPN is a fast VPN service for streaming TVer and Netflix Japan. Allows up to 6 simultaneous connections, has user-friendly apps and is secure with encryption. 30-day money-back guarantee.

Can I use a free VPN to unblock TVer?

In theory, you can use a free VPN to unblock TVer. However, we advise against using them for a number of reasons:

What can I watch on TVer?

TVer is a free online video service that was jointly launched by five Tokyo-based TV networks: Nippon TV, TV Asahi, TBS, TV Tokyo and Fuji Television. It offers a wide range of content including the following: