5 Best VPNs for public wifi hotspots to protect your privacy 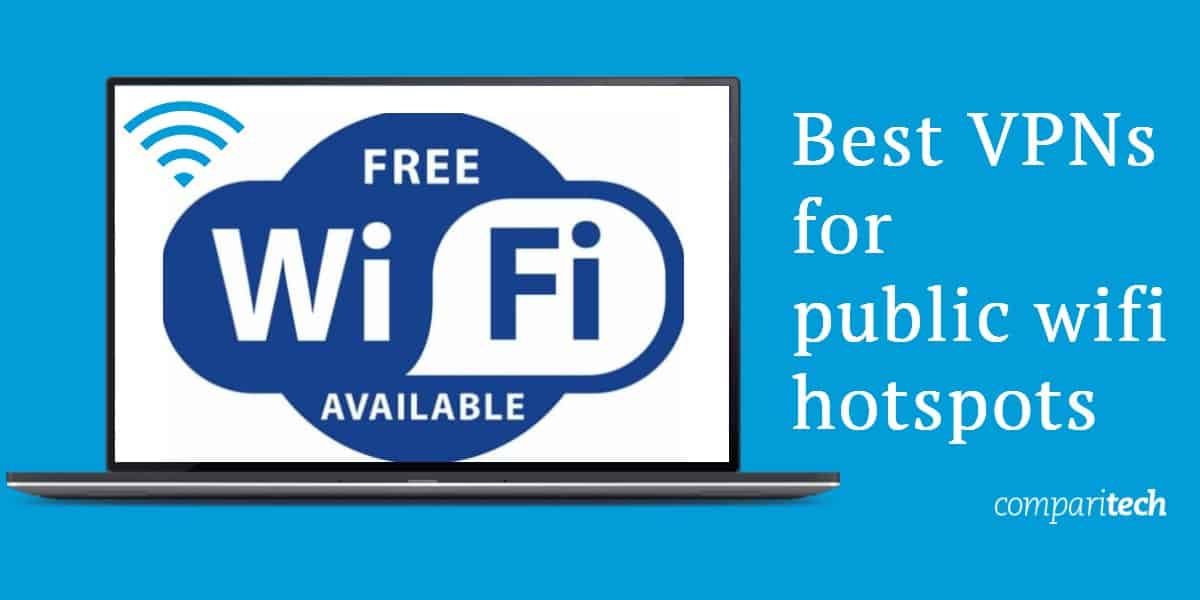 VPN stands for “Virtual Private Network”. When you use a VPN, you connect to the internet through one of the VPN’s servers. In doing so, your device’s traffic is encrypted, protecting you from some of the security threats coming from public wifi hotspots (more on these later!). Aside from being beneficial for your privacy, a VPN lets you unblock geo-restricted content including streaming services such as Netflix and BBC iPlayer.

However, not all VPNs are created equal. Some are much faster than others, some have privacy flaws and others won’t work with your favorite streaming services.

In case you’re short of time, here’s a quick summary of the best VPNs for public wifi hotspots:

The best VPNs for public wifi hotspots are those that provide a high level of security while offering high-speed servers and easy to use apps. We’ve narrowed down the options and only selected the VPNs that offer the following:

NordVPN is our top pick for a public wifi VPN. It’s blazing fast and offers approximately 5,300 servers worldwide. Whether you’re connecting to a public wifi hotspot at your hotel or a local restaurant, there’s plenty of secure servers to choose from. This VPN is ideal for unblocking geo-restricted content, such as Netflix to catch up on your favorite TV show or Skype to keep in touch with family and friends.

We’ve found that NordVPN is very well designed. It’s quick and easy to use with a wide range of apps and browser extensions offered. Aside from 24/7 live chat support, you can use NordVPN on up to 6 devices simultaneously. NordVPN protects you from hackers and snoopers with the use of 256-bit AES encryption. As well as a strict no-logs policy, NordVPN offers DNS leak protection and a kill switch feature. NordVPN also has an automatic VPN connection for wifi feature, automatically connecting you to the VPN when you join a wifi network.

BEST VPN FOR PUBLIC WIFI HOTSPOTS:NordVPN It has over 5,000 high-speed servers worldwide and unblocks geo-restricted content including Netflix and Skype. Secure to use at public wifi hotspots thanks to encryption and a strict no logs policy. Includes a 30-day money-back guarantee making it a risk-free option.

Surfshark is a great budget-friendly alternative. It has been ramping up its server network which now comprises more than 3,000 servers in over 60 countries. Easy-to-use apps mean this a great VPN for when you’re on the go. It’s known for its unblocking potential and can help you access the likes of Netflix, Amazon Prime Video, Disney+, and more.

Surfshark’s security suite really stands out. To start, it packs all the features you get with higher-priced providers such as military-grade encryption, perfect forward secrecy, and leak protection. In addition, it comes with a kill switch in all apps, split tunneling, and automatic wifi protection. No logs are ever maintained.

Apps are available for Windows, MacOS, iOS, Linux, and Android. There are also browser extensions for Chrome and Firefox, and Surfshark is compatible with some routers.

BEST BUDGET PROVIDER:Surfshark is an excellent low-cost alternative. It offers automatic wifi protection and a kill switch in all apps. Plus it’s a great unblocker and doesn’t limit connections. Plans include a 30-day money-back guarantee.

ExpressVPN is another great option for use with public wifi hotspots thanks to its combination of speed and security. Over 3,000 servers in 94 countries mean you’re unlikely to have a problem finding an appropriate server wherever you are. Whether browsing or streaming the likes of Netflix or Amazon Prime Video, ExpressVPN performs well.

Due to the risks involved with using public wifi hotspots, security is of the utmost importance. ExpressVPN boasts excellent security. It uses 256-bit AES encryption to protect your device’s traffic. Also offered is DNS leak protection, a kill switch, and split tunneling, all of which make it more difficult for your device and data to be compromised. Lastly, ExpressVPN doesn’t store any identifying logs of its users, ensuring the protection of your privacy.

SECURE AND RELIABLE:ExpressVPN is a highly secure VPN. Ideal for streaming and video calling at public wifi hotspots. Easy to use apps, 24/7 live chat support and highly secure with encryption, kill switch, and no logs. You can try it with a 30-day money-back guarantee.

CyberGhost is a fast and reliable VPN service with strong security to boot. It has an ever-growing network of servers which stands at over 3,700 at the time of writing. CyberGhost offers unlimited bandwidth and traffic which is great whether you’re browsing, streaming or video calling using a public wifi hotspot. What’s more, you can use your CyberGhost account to secure up to 7 of your devices simultaneously.

We’re impressed by the level of security provided by CyberGhost. Firstly, this Romania-based VPN has a strict no-logs policy that ensures your personal information remains private. Further security features include 256-bit AES encryption, DNS leak protection and a kill switch. As such, you’ll be able to use public wifi hotspots with reduced risk. CyberGhost has a wifi auto-protect feature, offering the option of automatically starting a VPN connection to protect you in the process.

CyberGhost’s apps are available for desktop (Windows and Mac), mobile (Android and iOS) as well as Amazon Fire Stick and Android TV. Chrome and Firefox browser extensions are also available. Manual setup is required for Linux and routers.

IPVanish is well worth considering if you or your family have a lot of internet-connected devices. The reason is that IPVanish lets you secure up to 10 devices simultaneously which is particularly important if you’re using public wifi with family and friends. This VPN service has a respectable network of over 1,200 servers which are located across 60 countries. As such, you should have no problem finding the right server for your needs and unblocking geo-restricted content.

Having tested out the various IPVanish apps we can say that they’re simple to use. You’ll find various options to customize your preferences while you can also search for servers via a map as well as by region and latency. Customer support is available should you encounter any issues. With zero traffic logs, IPVanish is a secure VPN to use and includes 256-bit AES encryption, a kill switch and DNS leak protection. You’re also presented with various ‘On Demand’ options. This allows you to automatically connect to IPVanish, protecting from unsafe public wifi hotspots.

IPVanish apps are available for Windows, Mac, Android, iOS and Fire TV. However, manual configuration is required in the case of Linux and routers.

SECURE UP TO 10 DEVICES:IPVanish allows up to 10 simultaneous connections which is ideal for families using public wifi hotspots. Keeps zero traffic logs and uses encryption to secure your data. 7-day money-back guarantee.

PrivateVPN is a VPN service with fast servers for browsing and streaming. If you’re using a public wifi hotspot and want to stream Netflix or Amazon Prime Video or make video calls, PrivateVPN is as a good choice. Offering unlimited bandwidth and speed, you’re unlikely to see much buffering or lag. You can connect up to six devices simultaneously with PrivateVPN, allowing you to secure all of your devices from hackers.

What stands out about PrivateVPN is how user-friendly it is. We recommend this easy VPN for anyone as the apps are simple to navigate while selecting a server takes seconds. PrivateVPN is headquartered in Sweden and states that it doesn’t keep any traffic logs. Your privacy is also protected with 256-bit AES encryption, DNS leak protection and a kill switch feature that ensures your internet traffic is cut should the VPN connection drop.

PrivateVPN apps are offered for Windows, Mac, Android and iOS. If you want to use this VPN with Linux or a router, some manual configuration is needed.

How to get a VPN for public wifi hotspots

We recommend you use a VPN not only for public wifi hotspots but for any time, anywhere to keep your information safe. Regardless of when and where you use a VPN, the process is always the same:

Are VPNs legal in my country?

The legality of VPNs varies by country. Thankfully, VPNs are legal in the vast majority of countries. Indeed, the only countries in which VPNs are illegal (or at the very least a grey area) are the following:

Why do I need a VPN for public wifi hotspots?

For example, Man in the Middle attacks (MITM) involve hackers positioning themselves between your device and a web server. This allows them to see what you’re doing online, from the websites you’re visiting, to the content of messages you’re sending. Needless to say, this can be highly detrimental to your privacy. In some cases, this results in the loss of your data and even identity theft.

By using a VPN, you can create a private tunnel between your device and the VPN server. Traffic is encrypted in the process, protecting you from snoopers such as your Internet Service Provider (ISP) or the hotspot provider. The best VPNs for public wifi hotspots offer important security features such as encryption, protection from DNS leaks and a kill switch. There should also be a strict no-logs policy to protect your privacy.

What else can I do to stay safe when using public wifi hotspots?

Aside from using a VPN, there are a few things you can do to improve your online security when using public wifi hotspots:

Can I use a free VPN for public wifi hotspots?

We strongly recommend against the use of free VPNs for public wifi hotspots for the following reasons: