Surfshark vs Netflix: does Surfshark work with Netflix?

Looking to unblock your usual Netflix library while traveling abroad? Not every Virtual Private Network (VPN) is up to the task, which is why today, we’re putting Surfshark to the test. Below, we’ll explain whether Surfshark unblocks Netflix, and if so, which libraries it can access.
Ian Garland Streaming, Kodi and VPN Expert 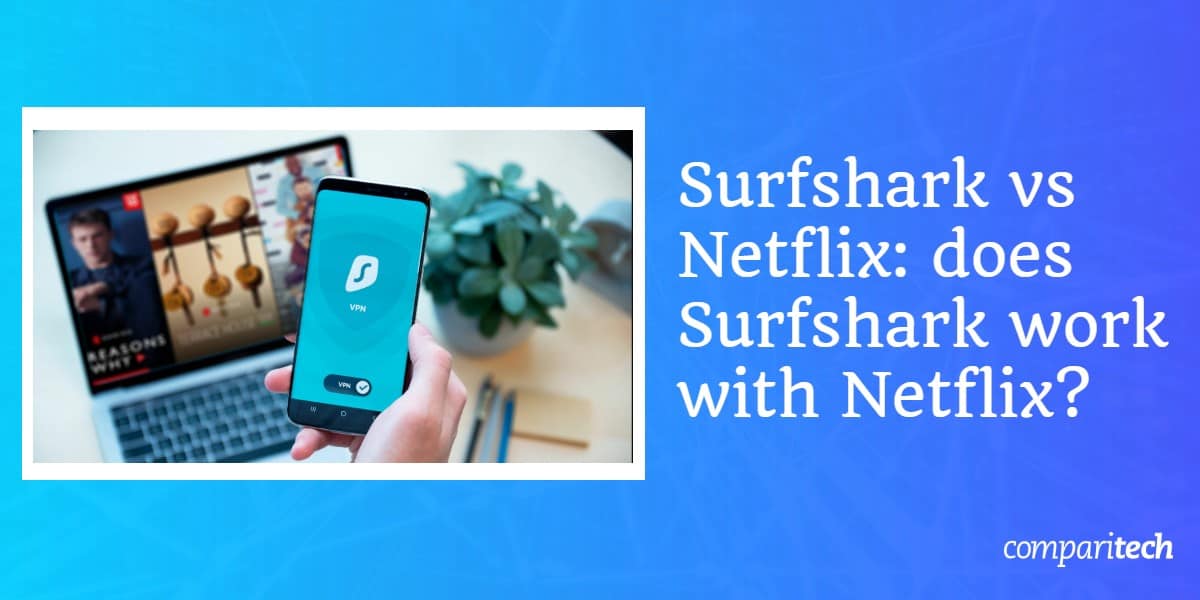 Netflix’s available content changes based on your location. For instance, some shows including The Bachelor and Charmed are only available in the US, while Planet Earth II can only be watched in the UK. This is because Netflix only has the rights to broadcast some titles in certain locations. Luckily, there’s a workaround. Users can connect to a VPN server in their home country to continue streaming their favorite shows as they travel.

Netflix is aware of this capability, though, and has spent considerable resources attempting to block VPN users. That’s why there are only a handful of services that can unblock Netflix libraries from abroad. Take a look below to find out how well Surfshark holds up, whether it allows you to stream Netflix while abroad, and whether it works with the Netflix app.

Surfshark is a strong choice for anyone who streams regularly. It has more than 1,700 servers in 60+ countries, making it fantastic for unblocking geo-restricted platforms from all over the world. What’s more, this VPN provides steady, reliable speeds, and unlike most of its competitors, has no connection limit. As such, you can use it to stream almost anything anywhere.

It takes your security seriously too. With cutting-edge features like 256-bit encryption, a kill switch, and protection against DNS, WebRTC, and IPv6 leaks, your activities are kept private at all times. Further, Surfshark has a strict no-logging policy. If you have any problems, or even if you want to know more about the service, support is on-hand 24/7 via live chat and email.

For more information, check out our full Surfshark review.

How to unblock and watch Netflix using Surfshark

You might be surprised by how easy it is to unblock region-locked streaming services with a VPN.

Here’s how to unblock Netflix with Surfshark:

Important: Netflix is constantly upgrading its VPN-detection features, which means that occasionally, VPN providers that worked previously may be temporarily blocked. There is some good news, though: these issues are usually resolved quite quickly and they rarely affect every major service. If you’re having difficulty accessing Netflix with Surfshark, we recommend using ExpressVPN, a similarly powerful service that excels at unblocking stubborn streaming platforms abroad.

Which Netflix libraries can Surfshark unblock?

We tested Surfshark against 30 regional Netflix libraries and found that it was able to unblock six: Australia, Canada, India, Japan, the UK, and the US. In many cases, these were accessible via both a web browser and the mobile app, although there were a few instances where the mobile apps refused to load (see the table below).

One of the best things about Surfshark is that you can actually stream Netflix on most of its servers. If you try to access a regional library that this VPN can’t unblock, it’ll usually just redirect you to the American (or occasionally, the British) version of the site. This allows you access to an expanded selection of content, without requiring you to route all of your traffic through a server on the other side of the world.

Can I use a free VPN instead?

Free VPNs are generally a poor choice for streaming. First, they usually have very small networks, which leads to slow speeds and stuttering video playback. Second, any free service that can reliably unblock Netflix will almost certainly be inundated with users. This means the (already very limited) network resources are spread even thinner.

It isn’t always easy to tell if you’re using a safe service either. Research indicates that a high percentage of free VPN apps on major app stores are actually Trojans looking to infect your system with malware. Unfortunately, you can’t even count on major free providers to keep you safe, as we discovered in 2016 when Hola sold users’ idle bandwidth to help run a botnet.

The best way to protect yourself online is to use a security-first VPN with a strict zero-logs policy.

Unblocking Netflix with a VPN: FAQs

⭐Why isn’t Netflix working with my VPN?

If you are able to browse another country’s Netflix library but unable to watch anything, it’s likely that you’ve tried to access a catalog that your VPN can’t unblock. Sometimes (but not always), you’ll see an error that tells you this: “You seem to be using an unblocker or proxy. Please turn off any of these services and try again.”

⭐Will a VPN slow my connection down?

Generally, the closer your VPN server is to your location, the faster your speeds will be. That said, there will always be some degree of slowdown since you are adding another step to the path your data takes across the internet. There shouldn’t be a huge noticeable difference unless your connection was extremely slow to begin with, in which case, you’ll likely have had difficulty streaming anyway.

⭐Will a VPN help if Netflix isn’t available where I live?

Netflix is available in all but a handful of countries, but with a VPN, you can sign up from anywhere.

First, connect to a VPN server in a country where Netflix is available. Next, obtain a Netflix gift card loaded with the appropriate currency (for instance, if you’re using a US server, you’ll need a gift card loaded with US dollars). These can be purchased online from a variety of different retailers, and some even send the code to you instantly via email. Finally, use this code to finish registering for Netflix, then login and stream to your heart’s content.