DAZN is only available in Austria, Canada, Germany, Italy, Japan, Switzerland and the USA. In order to watch DAZN abroad, you'll need a VPN, however most won't work. Find out the best VPNs for DAZN and how to watch DAZN abroad.
Mark Gill TECH JOURNALIST, VPN AND PRIVACY SPECIALIST 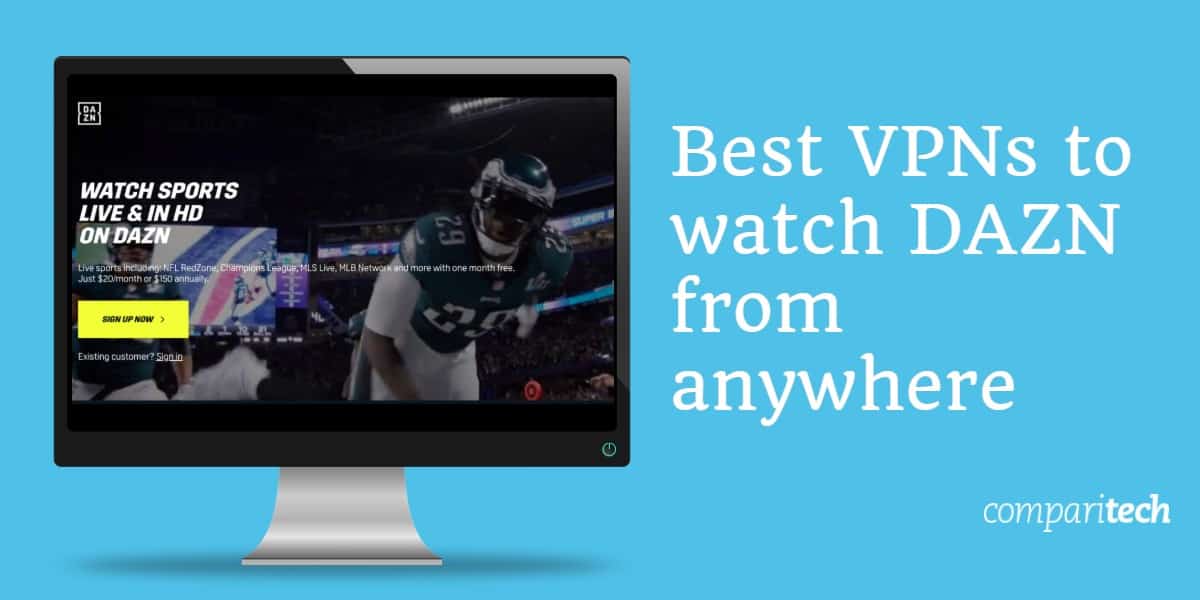 When it comes to DAZN, it’s not as simple as just picking any VPN on the market. That’s because DAZN is actively blocking many VPNs. In our testing, we only found 6 VPNs that unblocked DAZN. Most VPNs simply don’t work with this sports streaming service. For this reason, you may well come across the following message, even with a VPN activated:

“DAZN is currently available in Germany, Austria, Switzerland, Italy, Canada and Japan. You can find out more about DAZN and where it is available here. If you are seeing this in a location where you can usually watch DAZN in your country, then contact customer support.”

In case you were wondering, a VPN is a Virtual Private Network. Serving to hide your IP address, it allows you to explore the internet more securely while protecting your privacy and anonymity. Another advantage of using a VPN is that you can use it to unblock geo-restricted content on sites such as DAZN, Netflix, and BBC iPlayer.

Since DAZN blocks VPNs, you may find it difficult to find a compatible one. Save some time and effort by taking a look at the best VPNs to watch DAZN abroad in 2019. We’ve already done all of the research and looked for VPNs that met the following criteria:

Related: How to watch Wilder vs Fury on DAZN with a VPN

ExpressVPN is the best VPN for DAZN in 2019. In our testing, we were able to watch DAZN abroad with some of ExpressVPN’s Canada-based servers (these are located in Montreal, Toronto, and Vancouver). Overall, ExpressVPN has more than 3,000 servers in 94 countries so you’re never short of options when it comes to streaming DAZN, Netflix or Amazon Prime Video, for example. Streaming performance is always very consistent with minimal buffering and no lag.

You can expect unlimited bandwidth, unlimited server switches and 99.9% uptime with ExpressVPN. Switching servers is quick and convenient and the apps are particularly easy to use. We also like that there are browser extensions on offer, adding to the convenience of this VPN for DAZN. Should you encounter any issues, there’s round-the-clock support on hand via email or chat. In our interactions with ExpressVPN support, they were extremely quick to reply and knowledgeable in their answers.

What makes ExpressVPN the best VPN for watching DAZN abroad is that it offers not only high quality streaming but also a high level of security. ExpressVPN includes security features such as 256-bit AES encryption, DNS leak protection, and a kill switch. What’s more, ExpressVPN is based in the British Virgin Islands (no data retention laws) and keeps no activity or connection logs of its users.

ExpressVPN is available for Windows, MacOS, Android, iOS and Linux as well as routers. Browser extensions are available for Chrome, Firefox and Safari.

BEST VPN TO WATCH DAZN:ExpressVPN is our #1 choice. It has fast servers for streaming DAZN as well as Netflix. Offers strong security, protecting your data with encryption. Offers excellent apps and 24/7 live chat support. You can try it risk-free with the 30-day money-back guarantee.

NordVPN now unblocks DAZN in three countries: the US, Canada, and Japan. The company operates thousands of servers in more than 60 countries. Speeds are fast enough to stream in HD, with no limits on bandwidth or data. It also unblocks other popular streaming services like Netflix, Hulu, BBC iPlayer, and Amazon Prime Video from abroad.

Apps are available for Windows, MacOS, iOS, Android, Linux, and Fire TV. You can connect up to six devices at once.

BEST BUDGET OPTION:NordVPN is a reliable option for watching DAZN US, Canada, and Japan. It comes with a 30-day money-back guarantee.

Surfshark has roughly 1,700 servers in over 60 countries, making it a strong choice for anyone looking to use region-locked services abroad. In fact, as well as unblocking DAZN Canada, this VPN lets you access platforms like Netflix US, BBC iPlayer, and Sling TV. As there’s no connection limit, this VPN is ideal for people with lots of devices or those looking to share their account with family.

This service comes with plenty of advanced security features. There’s 256-bit encryption, protection against DNS, IPv6, and WebRTC leaks, and a kill switch for starters, but users can also block ads and malware automatically. There’s even a NoBorders feature that lets you bypass country-wide internet restrictions. Surfshark doesn’t log any information that could identify you. While its apps are very user-friendly, Surfshark offers 24/7 support over live chat.

Surfshark has apps for Android, iOS, Windows, MacOS, and Linux. It also works with wireless routers although manual configuration is required.

WATCH DAZN ABROAD:Surfshark offers decent speeds, powerful security and privacy protections, and the ability to safely stream DAZN on whichever device you like. This service includes a 30-day money-back guarantee.

CyberGhost has more servers than most VPNs (over 5,600 in 89 +countries). DAZN is particularly difficult to access even with a quality VPN but CyberGhost’s 176 servers in Canada (Montreal, Toronto and Vancouver) make it possible. You can expect fast streaming speeds as well as unlimited bandwidth and traffic. What’s more, a CyberGhost subscription covers up to seven devices, which is more than most VPNs on the market.

Our experience with the CyberGhost apps and browser extensions was positive. The app interface features a very simple layout, which makes selecting a server and activating the various features quick and convenient. However, there is also live chat support should you have any problems. We contacted them with a question and their reply was prompt and very helpful. Last but not least, CyberGhost offers a high level of security. 256-bit AES encryption, DNS leak protection, a kill switch and a strict no logs policy makes CyberGhost one of the safest VPNs on the market in 2019.

CyberGhost is available for Windows, MacOS, Android and iOS. While Linux is also available, it does require manual setup.

UNBLOCK DAZN FROM ABROAD:CyberGhost is a good choice for those on a budget. It has lots of servers in Canada for unblocking DAZN. Connect up to 6 devices simultaneously. Includes live chat support and uses encryption to secure your data. 45-day money-back guarantee.

PrivateVPN may be a smaller VPN with around 100 servers, but this network is spread across 60 countries. What’s more, PrivateVPN has servers in Toronto and Vancouver, Canada that can stream DAZN abroad. What’s most impressive about this Sweden-based VPN is the high quality streaming it offers. We’ve found PrivateVPN streaming to be very fast and with unlimited bandwidth and speed, you’re unlikely to encounter annoying buffering.

We appreciated the simplicity of the PrivateVPN app, which makes it particularly suitable for beginners. A single PrivateVPN account allows you to protect up to 6 devices simultaneously, which we feel offers very good value. In terms of security, PrivateVPN states that it has a zero data logging policy, protecting your privacy. Also important is the 256-bit AES encryption, DNS leak protection and a kill switch that prevents your IP address from being leaked even if the VPN connection drops.

Hotspot Shield has an expansive network comprising more than 3,200 servers spread across 70+ countries. Unfortunately, we weren’t able to use this service to unblock any English-language (Canada or US) versions of DAZN. However, we did have success with versions from some other countries, including Italy, Germany, Austria, and Switzerland, so if you’re looking to unblock one of those, this could be a good fit. Hotspot Shield boasts very fast speeds and unlimited bandwidth, and unblocks a ton of other streaming sites.

The apps are user-friendly and switching between servers is very fast. Live chat support is available around the clock should you need any help getting started or troubleshooting. You can connect up to five devices at a time under one plan. Security features include 256-bit encryption, perfect forward secrecy, DNS and WebRTC leak protection, and a kill switch (in the Windows app). An automatic wifi protection feature in the mobile apps will give you a security boost while on the go.

Hotspot Shield is available for Windows, MacOS, iOS, and Android.

UNBLOCKS SOME VERSIONS:Hotspot Shield is another low-cost option. It’s fast and secure, and can help you access most European versions of DAZN. 45-day money-back guarantee.

1. Free VPNs are slow. With too many users and too few servers, many free VPNs suffer from slow speeds. This will make trying to stream DAZN a frustrating experience with excessive buffering and lag in many cases.

2. Free VPNs are unsafe. Sure, this isn’t the case with every free VPN, but the reality is that if the VPN is free, it needs to make money somehow. This often involves spamming you with ads and even selling your data and activity logs to third parties.

3. Free VPNs lack features. It may be that you don’t need certain advanced settings. However, it’s always nice to have the option should you need it. What’s more, free VPNs often lack key security features such as a kill switch.

4. Free VPNs can’t unblock many sites. You’ll likely find that free VPNs struggle to unblock the likes of DAZN and Netflix. The reason for this is that such sites are actively blocking VPNs. Only the best paid VPNs are able to get around this.

DAZN is blocking the IP addresses of many VPNs, making it more difficult to unblock this sports streaming service abroad. Here’s a list of some of the VPNs that don’t currently work with DAZN: