How to watch American Gods season 3 online from anywhere 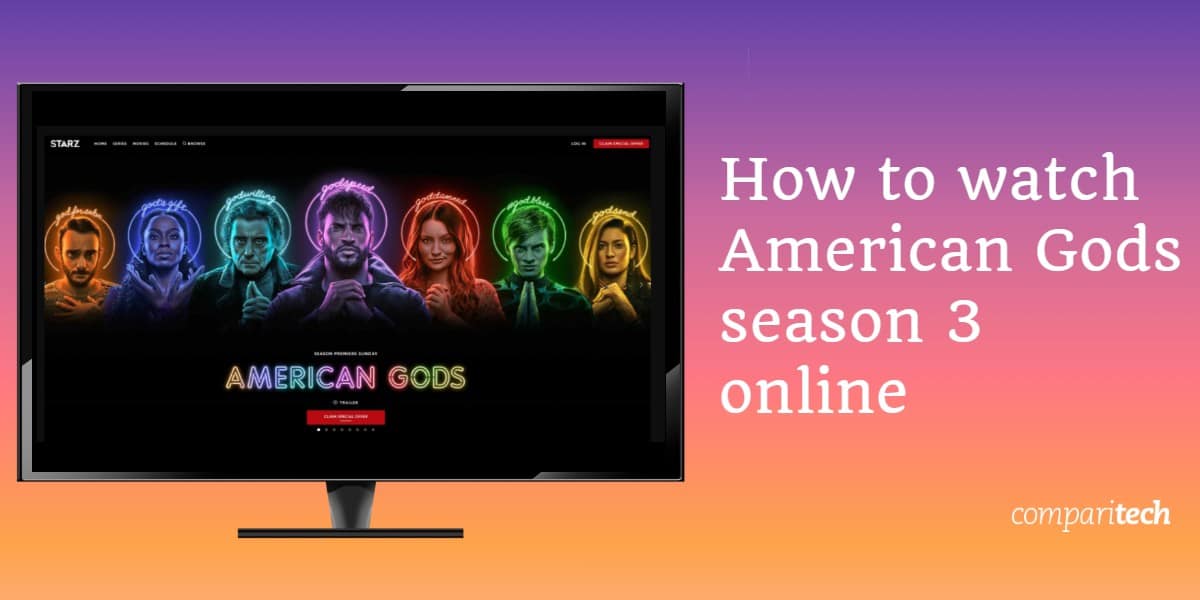 The third season of American Gods will begin on January 10. There’ll be a total of 10 episodes, which is a slight increase from previous seasons. Unfortunately, though, they’ll be released weekly, so fans won’t be able to watch them all at once. On the plus side, this show will be available almost everywhere, so it’s pretty easy to watch; just take a look below for more details.

You should note that this post will only recommend official sources for streaming American Gods. Given this show’s popularity, unauthorized streams are almost inevitable, but these are often of a very low quality. Further, they can be taken down at any time for copyright violation. The good news is that with a single international broadcaster that offers a free trial in many countries, it’s really quite simple to stream this show legitimately.

American Gods will only be broadcast on geo-restricted streaming platforms. As such, if you’re traveling, you may need a VPN to watch.

How to watch American Gods season 3 online with a VPN

New to VPNs? Not sure how to get started? Don’t worry: below, you’ll find a simple, step-by-step guide to unblocking American Gods while traveling abroad.

Here’s how to watch American Gods season 3 from anywhere:

Where to watch American Gods on US TV

In the US, American Gods will be available exclusively on Starz. If your cable TV plan already includes this channel, you can just log into the website directly and start watching right away at no added cost.

It’s also possible to watch American Gods online without cable, though. In fact, there are several ways to do this. First, you can log in with a Hulu, Philo, or YouTube TV account. These services all offer a free trial, so you have nothing to lose by trying them out. Alternatively, users can sign up for a Starz subscription. This is usually $8.99 USD per month, but a current promotion cuts the price to $5 per month for the first six months. Unfortunately, while Starz used to offer a seven-day free trial, this is no longer available.

Not quite up to date? Looking to get into the series for the first time? Either way, you’re in good hands since Starz also has the first two seasons of American Gods in its on-demand library.

Starz is geo-restricted and can usually only be accessed from within the US. By using an American VPN server, though, you can use it anywhere. Still don’t have a VPN? Why not take advantage of NordVPN’s 30-day money-back guarantee? This will require an upfront payment but you can cancel at any point for a full refund, making it completely risk-free.

Where else can I watch American Gods online?

As in previous years, Amazon Prime Video will be airing American Gods outside of North America. New episodes will be released every Monday starting January 11,  just one day after they’re shown in the US. Best of all, these will be added to every country’s library at the same time. This means that you won’t have to wait longer just because you live outside of mainland Europe, as is often the case with major international streaming releases.

Amazon Prime Video is available in almost every country (barring China, Iran, Syria, and North Korea). While the price varies between regions, you can generally expect to pay between $6 and $13 USD per month. It’s worth bearing in mind that the service comes with a one-month free trial in many countries. This means that you could potentially wait until the series finishes airing, sign up and watch, then cancel the trial to avoid being charged.

If you’re traveling in a country where Amazon Prime Video isn’t available, you should still be able to access it using a VPN.

What can we expect to see in American Gods season 3?

Despite how good the teaser trailer for the third season looks, it really doesn’t give too much away. We do know that fans can expect a change of scenery, with Shadow Moon relocating to Lakeside, Wisconsin in an attempt to unshackle himself from Wednesday once and for all. Unfortunately for him, the war is still going on and the gods have other plans.

Eagle-eyed fans may have noticed a couple of familiar faces in the trailer. Marilyn Manson is set to cameo as a death metal singer, while Danny Trejo will portray one of Mr. World’s many alternative forms. Further additions to the cast include Julia Sweeney and BET award-winning rapper, Wale.