How to watch The 100 season 7 online from anywhere

Looking to watch The 100 season 7 online for free? We’ll explain what to expect from the show’s final season, where you can watch seasons 1–6, and how to live stream The 100 from outside of the US with a Virtual Private Network (VPN).
Ian Garland Streaming, Kodi and VPN Expert 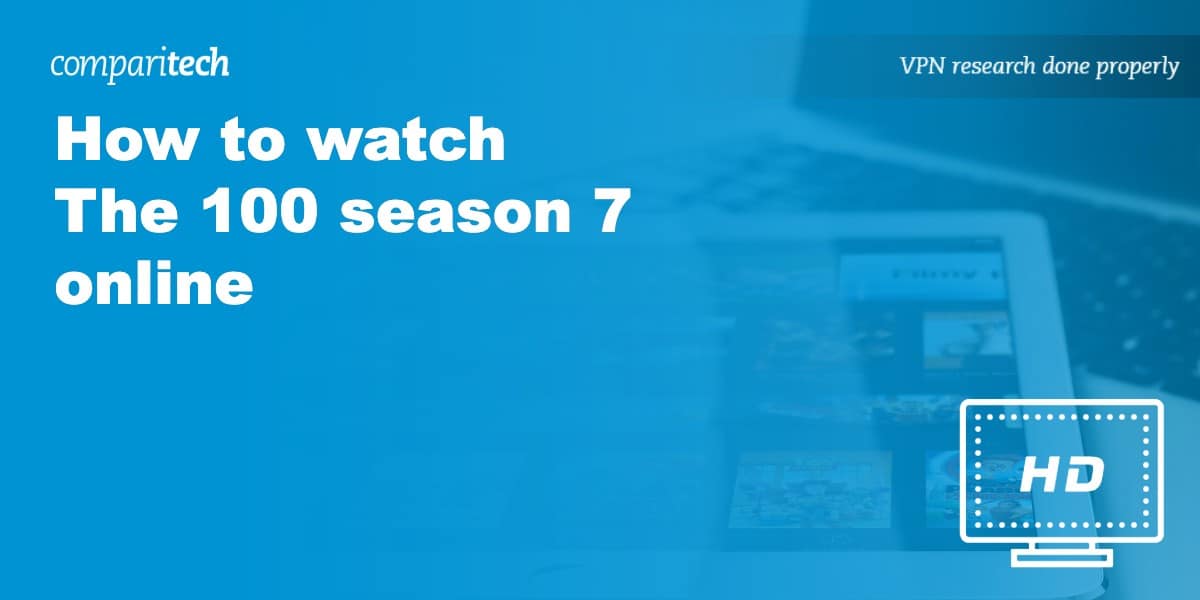 The 100 season 7 will premiere Wednesday, May 20, at 5 PM PST (1AM GMT / 8 PM EST), with a new episode every week. It’s expected to run for 16 episodes, and since this is the final season, there’s certainly a lot of ground to cover before the series ends. Below, we’ll explain how you can live stream every one of the new episodes online.

This post will only recommend official sources. Popular shows like The 100 are often available on unauthorized streaming sites, but we strongly advise against using these. The videos are often low-resolution and out of sync with their audio to begin with, but they’re also prone to be taken down for copyright violation, meaning there’s no guarantee you’ll be able to watch the whole season. As The 100 will be available for free anyway, there’s no advantage to watching on unreliable, unlicensed websites.

Many of the services showing The 100 season 7 are geo-restricted. You’ll need a VPN to access these on your usual services while traveling abroad.

How to watch The 100 online abroad with a VPN

VPNs can seem daunting at first, but it’s actually pretty simple to unblock geo-restricted platforms from abroad. Follow the steps below to set-up a VPN for the first time and start streaming The 100 from abroad.

Here’s how to watch The 100 season 7 online from anywhere:

If you’d like to stream The 100 live, we recommend running through the steps above well before the premiere. This approach ensures that if anything doesn’t work as expected, you’ll still have time to get help from your VPN’s customer support team and might not have to miss the start of an episode.

The CW will be showing the new season in the US. This broadcaster adds new episodes to its website’s on-demand library the day after they air. You can stream these completely free of charge, and don’t even have to create an account first. However, The CW doesn’t offer a live stream and episodes are removed after 30 days.

There are several over-the-top streaming services that offer The CW, so if you’d rather watch The 100 season 7 live, you have several options. Currently, you can stream The CW with YouTube TV, Hulu with Live TV, AT&T TV Now, and fuboTV (in select locations).

These services range from $40–50 USD per month, and each includes a seven-day free trial. These trials aren’t long enough to stream the entire season but they should let you decide whether or not it’s worth paying to watch new episodes live. Read on to see which free UK channel is showing the full season.

All of the above platforms are geo-restricted and only available within the US. You can still access these from abroad using an American VPN server.

Where else can I watch the 100 online?

Season 7 of The 100 will likely be available in several different countries but there are currently only a couple of confirmed international broadcasters. Read on to find out how to watch The 100 in your country:

Previous seasons of The 100 have aired on E4 in the UK, meaning it’s likely that this will be the case for season 7 as well (although no date has been confirmed as yet). As such, you’ll be able to watch new episodes live on Channel 4’s streaming platform, All 4. Better still, this service keeps new episodes for a short time after they air, allowing you to catch up even if you missed the live broadcast.

All 4 is free to use, although you will have to create an account before you can watch anything. This is fairly standard for the most part but you will be asked to enter a postal code. This isn’t anything to worry about; it’s not used to determine your location and in fact, any British postal code will work.

You should note that if you watch live content on All 4, British law requires you to have a TV license. This is easy to accidentally overlook as All 4 doesn’t actually verify whether the user has a license or not, and only alerts them to this requirement occasionally, instead of every time they try to watch live TV. All 4 is only available in the UK, so you’ll need a VPN to use it abroad, we recommend ExpressVPN, which works well with All 4.

It’s easy for Canadian viewers to stay up to date with The 100. While no Canadian broadcaster will be showing the new season live, new episodes will be added to Netflix Canada a few hours after they air in the US.

You can sign up to Netflix for $9.99 CAD per month, and new subscriptions come with a one-month free trial. Best of all, Netflix Canada currently offers every previous season of The 100. With six older to get through, there’s plenty to keep you occupied until May 20. To access Netflix Canada, you’ll either have to be in Canada or using a Canadian VPN server.

The CW has so far only confirmed which networks will be showing The 100 season 7 in a handful of countries. We can expect more details as the premiere draws closer, but if your country isn’t mentioned specifically in any press release, we recommend checking your country’s regional Netflix library and free-to-watch streaming platforms first. If the latest season isn’t on any of these, it’s possible that your only option will be to purchase the season on services like iTunes, Google Play, or the Microsoft Store.

Interested in catching up on prior seasons of The 100? The show’s availability differs from one region to another, but below, we’ll explain how you can watch seasons 1–5 of The 100 online.

Australia: Netflix Australia has seasons 1–5 but you’ll have to buy season 6. The Google Play Store offers the lowest price ($31.49 AUD).

Japan: All six seasons are on Netflix.

Mexico: The first six seasons are available on Netflix.

USA: Seasons 1–6 are available on Netflix.

While we can’t be sure exactly what to expect from the seventh season of The 100, we do know that things are going to get weird. Showrunner Jason Rothenberg has previously said that the upcoming episodes will center around a portal, and the effects it has upon those who pass through it. Specifically, it seems that time works differently on each side, leading to moments like the one where Hope ages 20 years in a matter of days.