We round up some of the best VPNs for watching UK TV abroad so you can watch British TV from overseas. Many VPNs won't work with BBC iPlayer and other popular streaming apps. We'll show you those that do and are fast enough for buffer-free streaming.
Ian Garland Streaming, Kodi and VPN Expert

If you’re a British expat, you’ve probably found that you can’t access your usual services like the BBC iPlayer from abroad. Some countries even block Skype, making it difficult to call your friends back home. Luckily, you can bypass regional blocking and stay protected by connecting to a Virtual Private Network (VPN).

VPNs keep you safe by encrypting your network traffic. This prevents it from being read by your Internet Service Provider (ISP), hackers, and anyone else who might be monitoring your network. Further, if you route your traffic through one of your VPN’s British servers, geo-restricted websites can’t tell that you’re actually located elsewhere.

For those of you who want to cut straight to the chase, these are the best VPNs for use in the UK or to access UK content and TV from outside the UK:

There are numerous VPN services to choose from but not all of them are suitable for streaming British content. To find the best VPNs for UK expats, we looked for services with the following qualities:

Here is our full list of the best VPNs for UK expats:

ExpressVPN has several British servers and can unblock popular services like Skype, Netflix UK, BBC iPlayer and ITV Hub, Sky Go, and BT Sport. Its servers are fast enough to play HD video without any noticeable buffering, making it a strong choice for watching British TV from abroad.

This provider takes privacy seriously. It uses 256-bit encryption and perfect forward secrecy to keep your online activities secure. There’s also a kill switch and DNS leak protection, and no logs are maintained that can be traced to an individual user. Further, ExpressVPN accepts bitcoin payments and has an optional .onion site for those who want to remain as anonymous as possible.

BEST FOR BRITISH TV:ExpressVPN is our top choice. Fast speeds and compatibility with a huge range of streaming services make ExpressVPN our preferred option. Customer service is top-notch. The VPN is easy to use and comes with a 30-day money-back guarantee in case you change your mind.

NordVPN offers a staggering 400+ UK-based servers. It can unblock all the major British streaming platforms including BBC iPlayer, Netflix UK, ITV Hub, Sky Go, and All 4. Every server is optimized for HD streaming, so content should play without any buffering or stuttering, assuming your internet connection is fast enough.

NordVPN even lets you access Facebook from within China. With six simultaneous connections allowed, you can protect an entire household and stream from whichever device you prefer.

This VPN simplifies online security by including an ad-blocker and anti-malware functionality. It features 256-bit AES encryption, DNS leak protection, and an application-specific kill switch. It’s great for privacy-conscious users as it keeps no logs and subscriptions can be paid for in bitcoin.

NordVPN has apps for Windows, Android, MacOS, and iOS. It can be manually configured to work with Linux and selected routers.

BEST BUDGET CHOICE:NordVPN has a vast network of servers. It works well with all the major streaming services including BBC iPlayer and Netflix. Includes 30-day money back guarantee.

Cyberghost has more than 150 DDoS-protected servers in the UK. It offers a simple, user-friendly interface that allows you to select servers optimized for a specific purpose. Options include unblocking sites — such as BBC iPlayer, ITV Hub, All 4, and Eurosport — or browsing anonymously on platforms like Facebook. With consistent connections and fast speeds, streaming UK TV isn’t a problem at all.

CyberGhost, like NordVPN, offers anti-malware and ad-blocking features. It utilizes 256-bit encryption, automatic HTTPS redirection, a kill switch, and protection against DNS, IPv6, and port forwarding leaks to keep its customers safe. With up to seven connections permitted per account and live customer support in case of any issues,

CyberGhost takes the inconvenience out of using a VPN. Apps are available for MacOS, Windows, Android, Linux and iOS. CyberGhost can be manually installed on certain network routers.

Beginner friendly apps:CyberGhost is fast and affordable. It has a simple set up with strong on privacy credentials. Streams HD video reliably. 45-day money back guarantee.

IPVanish’s large network includes 85 servers spread across Scotland and England. It’s capable of unblocking popular apps and platforms including Skype, WhatsApp, BBC iPlayer, Sky Go, All 4, and ITV Hub, plus it’s one of the fastest VPNs around. This means you can stream British content in high-definition without worrying about long buffer times or stuttering playback.

This VPN uses 256-bit encryption and offers several additional security options, including IPv6 and DNS leak protection, OpenVPN obfuscation, a kill switch, and a LAN traffic blocker. What’s more, IPVanish has a no-logs policy. It allows up to five connections at once, making it a strong choice for those looking to browse securely from any device.

GOOD FOR TORRENTING:IPVanish is a popular choice with torrenters. Strong encryption and fast speeds make this VPN popular with Kodi and torrent users. 7-day money-back guarantee.

PrivateVPN only offers four UK servers (all located in England) but is fast enough to stream HD content with no noticeable buffering. It can unblock BBC iPlayer, ITV Hub, All 4, and even permits access to the British Netflix library, something many other VPNs struggle to do.

Up to six simultaneous connections are allowed per account. This VPN offers 256-bit encryption, a kill switch, a no-logs policy, and protection against IPv6 and DNS leaks. 24/7 live chat support is available, albeit with slightly longer response times outside of office hours. With your permission, the staff can even take control of your device and set everything up for you.

PrivateVPN has dedicated apps for MacOS,  Windows, Android, and iOS. Linux and some routers are also supported but manual configuration is required.

Surfshark operates server clusters in London and Manchester. Either one is capable of unblocking popular UK streaming sites including BBC iPlayer, ITV Hub, All 4, Netflix UK, and Sky Go. Best of all, Surfshark doesn’t put a limit on how many devices you connect. That makes it a great budget option for a family or group of flatmates.

On top of its cord cutting prowess, Surfshark using strong encryption and adheres to a no-logs policy, so your privacy is secured. Torrenting is allowed and kill switches can prevent data leaks on both desktop and mobile. If you encounter any issues, live chat support is available around the clock.

UNLIMITED DEVICES:Connect all your devices to Surfshark and stream UK-only video from anywhere in the world without limits. 30-day money-back guarantee included.

Can I use a free VPN to access British streaming platforms?

Although you might be tempted to use a free VPN for accessing UK-based streaming services, we advise against it. Some organizations, like the BBC, have taken steps to prevent VPN users from watching their content, so in all likelihood, a free VPN just won’t work. Also, these services are almost always slower than their paid-for counterparts. This means that even if you do manage to gain access, the video playback may be choppy or buffer endlessly.

As free VPN services can’t charge their users directly, they’ve been known to rely on shady tactics to generate income. These include injecting targeted ads on the pages you visit, selling your browsing habits to third parties, and using tracking cookies to keep tabs on you even after you disconnect.

Unfortunately, free VPNs have a proven track record of misleading their users. In recent years, these services have been caught coming bundled with malware and even going as far as to sell their users’ bandwidth for use in botnets. To protect yourself and your private information, we highly recommend using a reputable VPN service with a focus on customer privacy.

What else can a VPN enable me to do?

Aside from having problems accessing streaming channels while abroad, you may find that some governments prevent access to certain websites. Usually, only sites with extremist or illegal content are blocked, but in some cases, geographic blocking is used to enforce censorship (such as with China’s Great Firewall) or prevent people from contacting others outside of the country.

A VPN will allow you to access blocked services like Skype or Facebook so you can communicate with your friends and family. That said, it’s important to know that some countries, such as China and the United Arab Emirates, have laws against using a VPN. For this reason, we advise researching your country’s VPN legislation before attempting to use one.

Which services are blocked?

Depending on where you live, you might find that the services you’ve come to rely on are blocked by the government. The specific sites differ from one region to another, but if you live in China, Russia, Sri Lanka, Qatar, the United Arab Emirates, Pakistan, or Iran, you may be unable to access the following services:

We have a more detailed list of sites blocked in China here.

Additionally, these countries tend to censor sites dedicated to the following things: 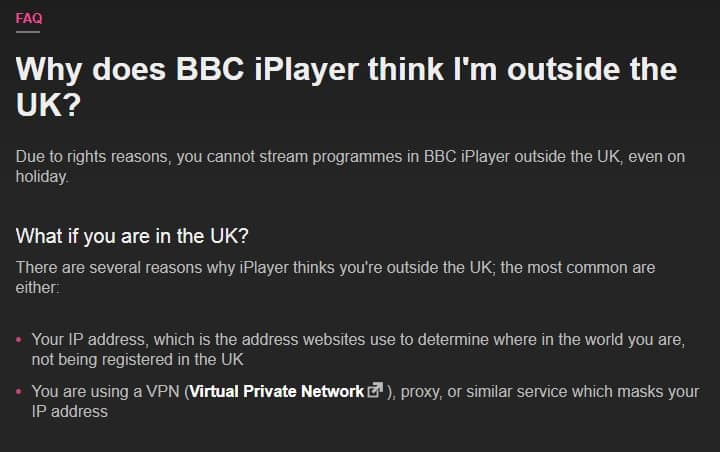 All of the VPNs above have been confirmed to work with the most popular British streaming platforms. That said, the companies behind these services have invested lots of time and effort into preventing VPN users from accessing their content.

Recently, streaming platforms have begun blocking IP addresses known to belong to VPN providers. As such, you may find yourself unable to stream content from geo-locked sites, even when connected to a British server with a UK IP address.

The good news is that it’s very rare for these sites to account for every suitable IP address. The solution is often as simple as switching to a different server in the same country. Some VPNs even provide the ability to switch IP addresses with the touch of a button. If you still have issues, you can contact a customer support agent who can direct you to a working server or run you through some troubleshooting steps.

Why can’t I watch a specific show or channel?

Some platforms have specific web players for individual parts of the UK. For instance, ITV Hub redirects Scottish viewers to the STV Player. If you’ve connected to a server in Scotland, Wales, or Northern Ireland, this could be the issue. Try connecting to an English server instead to see if this fixes the problem.

Despite its attempts to block VPN users, BBC iPlayer actually makes it fairly easy to watch content from other regions of the UK. You can simply open the Change location menu (in the bottom-left of the website, and in the Settings menu of the app), and select a different region.