How to install Kodi on the Fire TV Cube 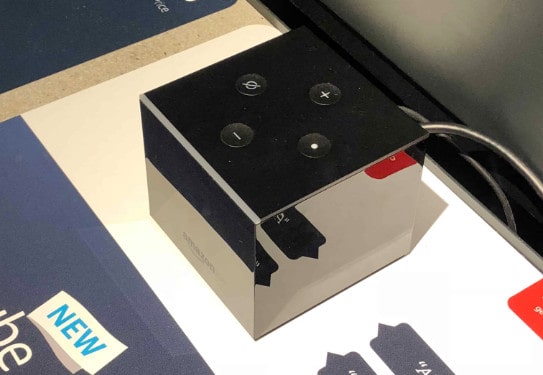 Kodi is a free software media player. It can be used to play videos or music stored on a device or streamed from the Internet. It can be installed on Windows PC, Mac, iPhone, iPad, Apple TV, Nvidia Shield, Amazon Fire Stick, or Fire Cube.

Warning: Always use a VPN with Kodi

Whenever you use Kodi to stream video from the Internet, you should always use a VPN to protect your privacy.

If an ISP knows you are streaming video, it may throttle your speed. This can lead to buffering, ruining your enjoyment of a show or movie. ISPs often do this because streaming video takes up a lot of bandwidth on the network, and the provider may lack infrastructure needed to deal with this problem. Additionally, some ISPs are starting to reduce video quality in order to get users to pay for more expensive data plans. Using a VPN will keep your streaming activity private, often preventing ISP speed throttling.

VPNs also help to get around geographic content blocks and man-in-the-middle attacks by hackers.

Not all VPNs are good for Kodi users. Most don’t have apps for the Fire TV Cube, Fire Stick, or Nvidia Shield. Many keep logs of users’ activities. Some don’t have servers in enough countries to get around geoblocks effectively.

We suggest IPVanish for Kodi users. It has an app for Fire TV Cube, FireStick, and Nvidia Shield. It keeps no logs. It has servers in over 60 countries. IPVanish is a great way for Kodi users to protect themselves against ISP speed throttling, geographic content blocks, and man-in-the-middle attacks.

How to install Kodi on the Fire TV Cube

The Amazon Fire TV Cube uses the Android operating system. And since there is an Android version of Kodi, there is no question that Kodi can run on it.

The only two problems are that Kodi is not available in the Amazon App Store and that the Google Play Store is not easily accessible on the Fire TV Cube. This makes installing Kodi more complicated than on other devices, but it is still possible.

Here are instructions on how to install Kodi on Fire TV Cube using each method.

Now that you have Kodi installed on your Fire TV Cube, it’s time to install addons so that you can start watching movies and shows right away. Here are some of the best Kodi addons for Fire TV Cube.

The Tubi TV kodi addon streams from tubitv.com, a free streaming video site with a library of over 50,000 titles. It carries family movies, horror, sci-fi and fantasy, reality TV, crime TV, anime, a section for movies that are highly rated on rotten tomatoes, and more.

Some of the titles on Tubi TV are geoblocked to users outside of particular countries. For example, there are many U.K. films not available on the Canadian or US versions and vice-versa. However, these geoblocks can be unlocked with a VPN.

There’s also a Tubi TV app available for Fire TV through the Amazon App Store. However, this app will play commercials, while the Kodi addon will not. Kodi filters out ads from Tubi TV and other ad-based services.

The Tubi TV Kodi addon can be found in the Kodi1 repo. Follow these instructions to install Tubi TV for Kodi.

The Crackle Kodi addon streams from sonycrackle.com, another free streaming-video site. It has a smaller catalog than Tubi TV, but still has many quality titles. Crackle is especially useful for finding films and shows in 1080p HD resolution. In addition to hosting syndicated content from major networks and studios, Crackle also carries some original series that are popular, such as Startup and Cleaners.

Like Tubi TV, Crackle has an official app available in the Amazon App Store. But this app interrupts the content with commercials every 15 minutes or so. The Kodi addon plays all of Crackle’s content commercial-free.

Users outside the U.S. need a VPN to access Crackle.

The Crackle Kodi addon was originally part of eracknaphobia’s repo. However, it has recently been added to the official Kodi repository. To install, begin at the Kodi main menu and click addons → download → video addons → crackle → install.

See also: How to install and use the Crackle Kodi addon

Users outside the US will need a VPN to access Pluto.tv.

Pluto.tv is in the official Kodi repository. To install, click addons → download → video addons → pluto.tv → install. Here is more info on how to install and use Pluto.tv for Kodi.

The PopcornFlix Kodi addon streams from popcornflix.com. It carries many different genres of movies, including romance, sci-fi, mystery, family, foreign films, documentaries, etc. Notable titles include There Will Be Blood, Primal Fear, Braveheart, and The Doors, amongst many others.

Like some of the other addons on this list, there is an Amazon Fire TV app for Popcornflix. But it interrupts content with commercials every few minutes, whereas the Kodi addon does not do this.

Read more: How to install and use Popcornflix for Kodi

We hope you’ve enjoyed this guide to installing and using Kodi for Fire TV Cube. If you’d like more information about Kodi, you may want to read some our other articles on the subject, including the 123 best Kodi addons, how to watch YouTube on Kodi, and the best Kodi addons to watch movies.