How to install SPMC on Amazon Fire Stick or Fire TV

Interested in installing SPMC on an Amazon Fire Stick or Fire TV? This guide will walk you step-by-step through the process of installing and configuring SPMC. 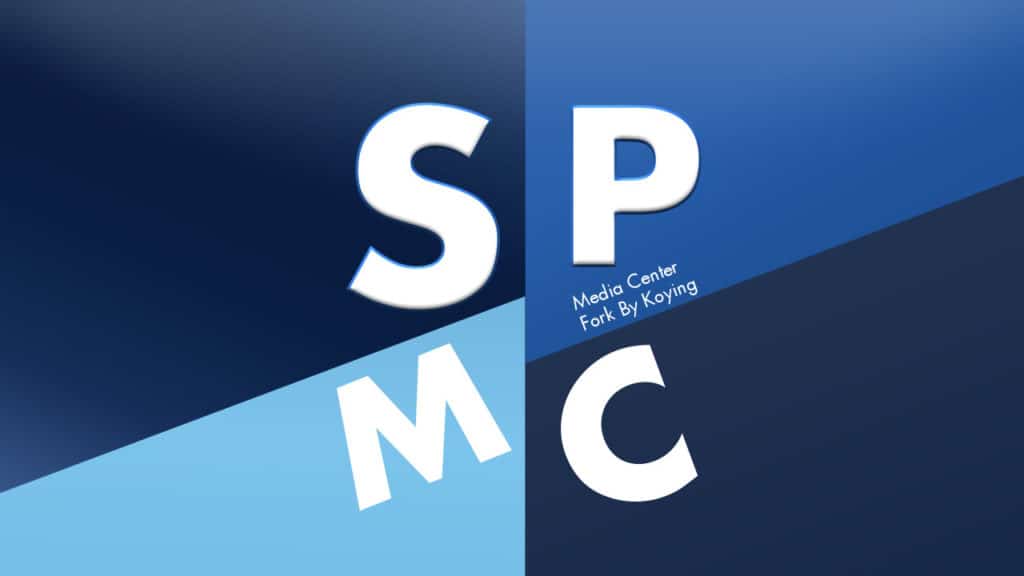 Semper Media Center (SPMC) is a program that builds upon Kodi’s source code. It was created by a member of the Kodi team but is designed to provide better performance on Android devices than Kodi does. The program provides an option for those who may not want to update Kodi on a Fire TV device, but still want something new.Unfortunately, there’s no dedicated SPMC app in the Amazon Fire app store. As a result, it’s not immediately obvious how you can install SPMC on Fire Stick or Fire TV.

In this article, we’ll be showing you the simplest way to install SPMC on these devices. Due to the Fire TV and Fire Stick’s limited system resources, there are also a few tweaks that can be made to make SPMC run more smoothly. We’ll also be explaining which settings you should change, what they do, and their impact upon your system’s performance.

SPMC, like Kodi, is completely legal to use. However, there are certain addons available that provide access to unlicensed content. We encourage our readers to use official sources and to research their country’s laws on streaming before attempting to use Kodi or SPMC for this purpose.

Warning: SPMC should only be used for content to which you have the legal right to access. Neither the SPMC developers nor Comparitech advocate the use of SPMC for piracy.

Important: Always use a VPN with SPMC

Virtual private networks (VPNs) are sometimes used to hide unlicensed streaming from a user’s internet service provider (ISP). That said, VPNs have many legitimate applications and can greatly benefit even those that stream from official sources.

VPNs work by routing your network traffic through an encrypted tunnel. This prevents it from being read by any outside observer. This doesn’t just protect you from hackers; it also stops your ISP from selling your browsing habits or using them to justify limiting your network speeds.

It’s imperative that you choose the right VPN provider, though. In the past, unscrupulous VPNs have been caught selling their user’s bandwidth or using their systems to create botnets. Even without these issues, some VPNs are just too slow to be of any use for streaming video.

We recommend IPVanish. It provides stable, consistent connections to servers in more than 50 countries and has minimal impact on your network speeds. Further, it’s one of the most  portable VPNs, boasting dedicated versions for all popular devices including the Amazon Fire TV and iPhone.

SPMC is a Kodi fork. This means that it uses Kodi’s code as a base for future improvements. Unlike most forks, which are created by hobbyists, SPMC’s creator Chris Browet was actually part of the official Kodi team in the past. After leaving this role, he resumed development on SPMC.

As you might expect, SPMC is very similar to Kodi. It uses the same Confluence skin and menu structure as Kodi 16, albeit with a few changes intended to make SPMC easier to use on touchscreen devices. However, as Browet is primarily an Android developer, he was able to do more than just make aesthetic changes.

The main difference between Kodi and SPMC is that the the latter is better optimized for Android devices. There are also several ease of use features that Kodi doesn’t currently have, such as voice searching functionality and the ability to view 3D Bluray ISO files. SPMC also includes the option to use HD audio passthrough, which is currently only supported on the Windows and Linux versions of Kodi.

Although SPMC isn’t available from the Fire Stick app store, installing it is fairly straightforward. First of all, you’ll have to allow the Fire Stick to install apps from unrecognized sources. To do this, go to the Home screen. Scroll along the top row and open the Settings tab. 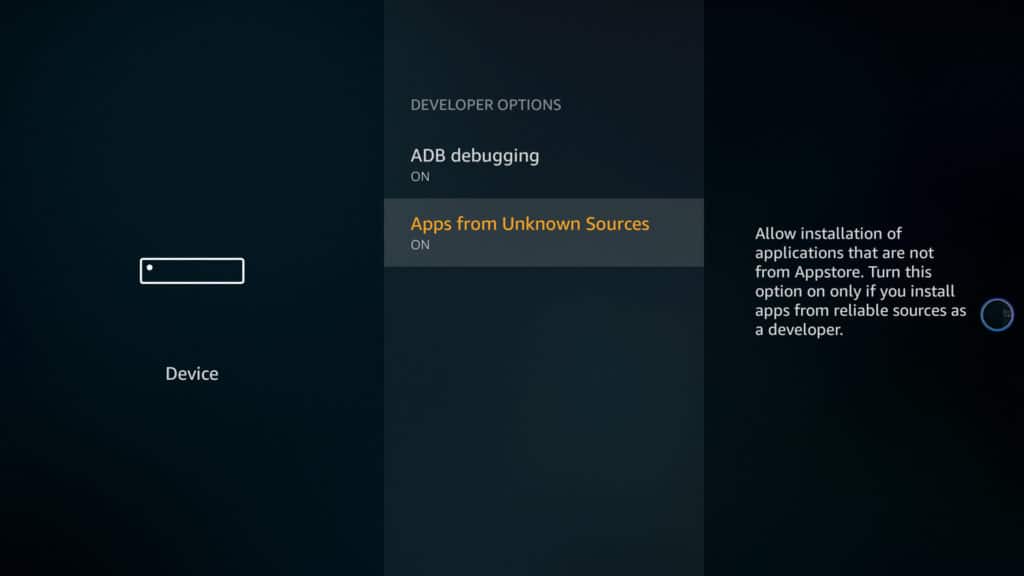 From here, click on the Device option, then click on Developer options. Click the Apps from Unknown Sources option. The text underneath should now read “ON”. If it doesn’t, click it again. Now hold the voice search button on the remote and say “Downloader”. You should be redirected to the Downloader app by AFTVNews. You can also search for it manually in the app store if you’d prefer.

Install it, then open the addon. There’s a box in the middle of the screen where you can enter a URL. In this box, enter the following address, without the quotation marks, then click the Go button. 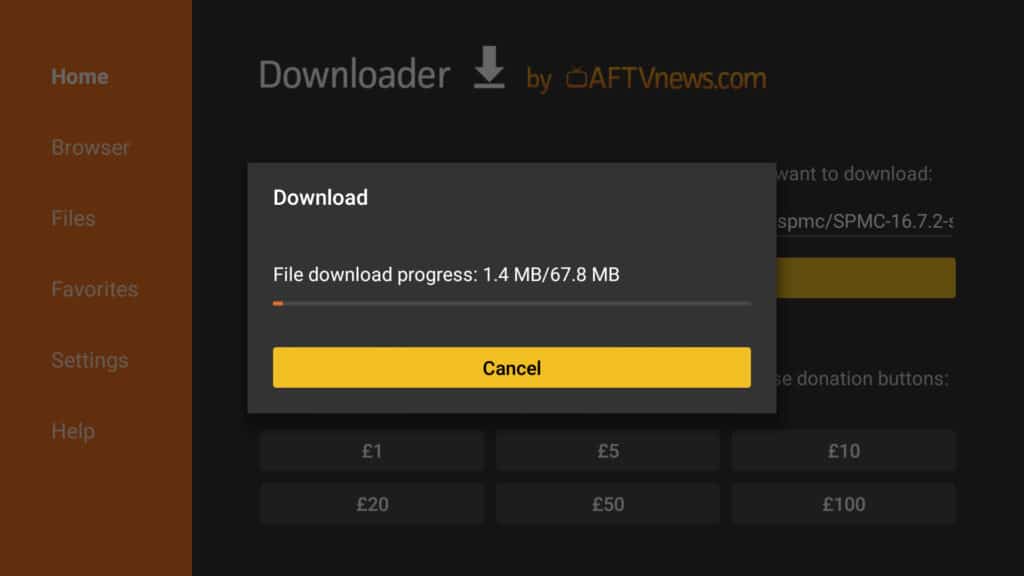 Once the file has downloaded, you’ll see the permissions that SPMC requires. Click the Install button at the bottom of the page, then open the app. 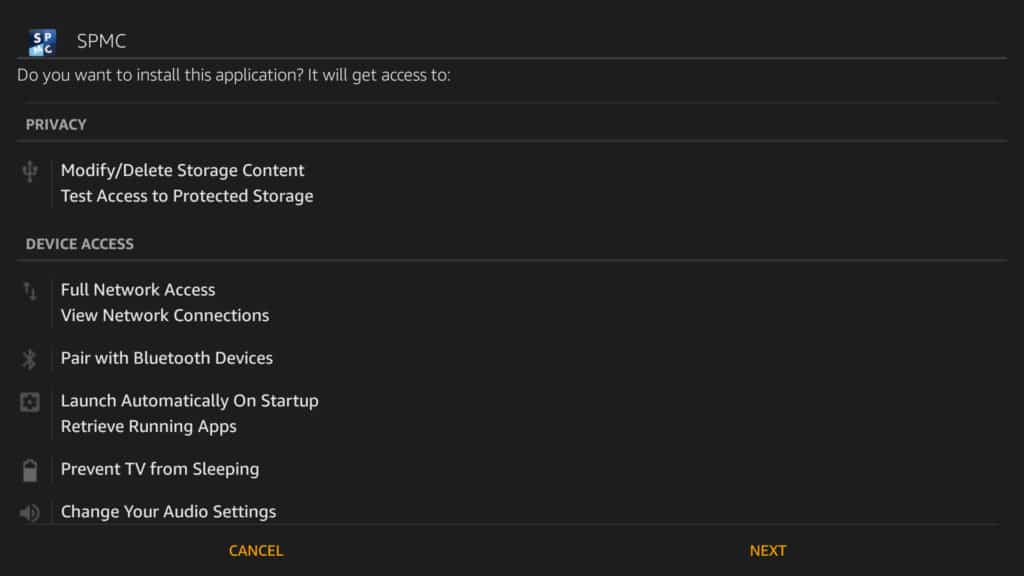 SPMC is now installed but there are still a few changes to make to ensure you get the best possible performance from it on your Fire TV.. We’ll be following Browet’s own recommendations for the Fire Stick, which you can view here and here.

Begin by navigating to the System tab and clicking on Settings. Select System at the bottom of the list, then scroll down to the Settings level option on the following screen. Click this until it says Expert.

Now scroll back up to the Audio input tab. Change the Audio output device to “Android, RAW Passthrough”. Set the Number of channels to 7.1. This will allow you to use 7.1 surround sound speakers if you have them but shouldn’t cause any problems even if you’re using your TV’s standard stereo speakers.

Output configuration should be set to “Best match”. This means that if you change the output device (for example, by connecting headphones during a movie), the audio should automatically reroute itself to the new device.

Click the Enable passthrough option. This allows your TV to make sense of encoded audio (DTS, Dolby Digital, etc.) directly instead of relying on SPMC to do it. Your Passthrough output device option should be set to “Android, RAW Passthrough”.

Back out of the current menu and scroll up to the Video tab. Click the Settings level button at the bottom until it says “Expert”, then go into the Playback tab. Set Adjust display refresh rate to “On start/stop”, then Pause during refresh rate change to three seconds. 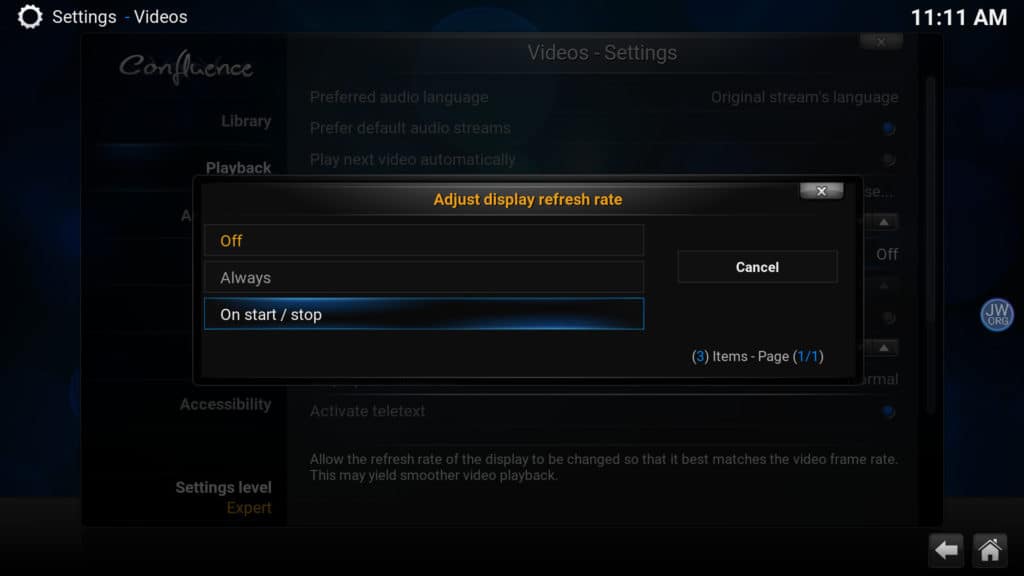 These options ensure that your TV will display content at the correct refresh rate, removing the soap-opera effect on newer TVs while making sure that 60fps video looks as smooth as possible. It should be noted that Phillips and Sony TVs do not support this feature so users with these devices should set Adjust display refresh rate to “Off”.

Although the official version of Kodi is easier to install on an Amazon Fire Stick than SPMC, the process is still fairly straightforward. However, installing your preferred media center is only the beginning. You might be interested in reading our guides to speeding up your Fire Stick, reducing the amount of buffering Kodi does, or transferring a customized Kodi build to your Fire Stick.