Season 10 of The Walking Dead begins October 6, 2019, on AMC. If you want to watch The Walking Dead live on Kodi, you have two legitimate online options: PlayStation Vue or Sling TV Both are subscription TV streaming services limited to the United States, although you can still view either one outside of the US.
Paul Bischoff TECH WRITER, PRIVACY ADVOCATE AND VPN EXPERT 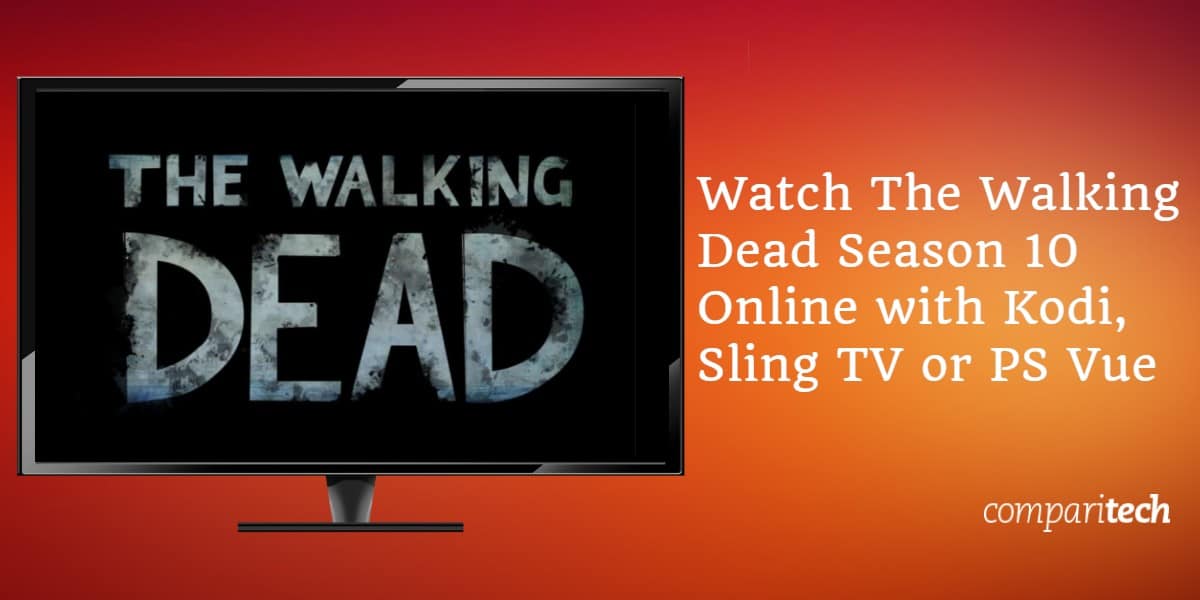 How to watch The Walking Dead on Kodi

To watch The Walking Dead Season 10 on Kodi, do the following:

Warning: Use a VPN with Kodi streaming

If you live in another country or are traveling outside the US, access to PlayStation Vue and Sling TV will be blocked. To get around this, you can use a VPN to “spoof” your location. A VPN encrypts all your internet traffic and sends it through an intermediary server in a location of your choosing–in this case, the US. We’ll get to the specifics on how to do this for each service further down.

Kodi has some worrying privacy and security issues, these apply to those using Kodi legally as well as those using it illegally. A common concern for Kodi users includes ISPs spying on how they use Kodi and what they stream, even if it is not pirated content. A VPN will stop your ISP or others snooping on your internet activity. A VPN can also guard against security issues such as Man in The Middle attacks which Kodi users are vulnerable to.

Most VPNs are too slow to use with Kodi. Others log your activity so don’t protect your privacy. We recommend IPVanish as it has speeds fast enough for streaming in HD or even UHD, keeps no logs of user activity, works with all popular devices and is the easiest VPN for Amazon Firestick users to install.

IDEAL FOR STREAMING:IPVanish is a fast, security-conscious VPN with a no-logs policy and over 1,00 servers worldwide.

How to stream The Walking Dead on Kodi

There are two legitimate and legal options to watch AMC through Kodi. Most other Kodi addons, such as cCloud TV, Ultimate IPTV, or RocketStreams, utilize pirated streams.

Sling TV is an over-the-top streaming service that allows users to watch dozens of channels (including AMC) live online. Packages start at $15 USD per month, although you’ll need a credit card linked to an American address in order to sign up.

To get started, just install the Sling.tv Kodi addon from the official Kodi repo. Then, right-click its icon, choose Configure, and enter your login credentials. You should now be able to watch Sling TV streams without any issues.

Sling.tv and other streaming addons don’t come pre-installed on Kodi. You’ll have to install a repo, then install an addon from that repo to start watching streams. Check out our list of the best Kodi addons for streaming TV and movies here. Learn how to install repos and addons here and see our list of the best Kodi addons of 2019 here so you know which are safe to use and which to avoid.

If you decide to go with PlayStation Vue, you’ll be in luck. Not only can you run PlayStation Vue through a large number of devices, but you can also connect to your account through a Kodi addon.

After downloading and installing the addon, find it in your Addons section, then right-click on it. Click on Settings, and then enter your username and password.

A basic PlayStation Vue subscription starts out at $49.99 per month for 60+ channels, including AMC. You can watch The Walking Dead live online as it airs on TV, or use the built-in cloud-based DVR to save it for later.

PlayStation Vue is no longer limited to just the PS3 and PS4. You can also watch on Amazon Fire TV, Roku, Apple TV, Chromecast, any Android or iOS device, and even your web browser. PlayStation Vue Mobile is also available on iOS and Android devices, but you’ll need an activated, TV-connected device to use it. Several channels on mobile are also restricted depending on licensing rights and your location.

If you’re using Kodi on a Windows or Mac computer, or on a streaming device like a Amazon Fire TV Stick, you can sign up for and stream any one of these additional options that do have AMC:

A VPN like IPVanish should work with any of these services to allow you to watch abroad and avoid ISP throttling, although other options, such as ExpressVPN, Cyberghost, or NordVPN may be a better choice for non-Kodi viewing.

Related: How to install the Kodi AMC Addon.

“The Walking Dead” by Jorge Figueroa licensed under CC BY-SA 2.0