Mike Tyson and Roy Jones are coming out of retirement for an 8-round exhibition match on November 28. Jones vs Tyson is scheduled to stream as a Pay-Per-View event on the streaming service Triller, but will it make it to Kodi, as well?
Sam Cook Data journalist, privacy advocate and cord-cutting expert 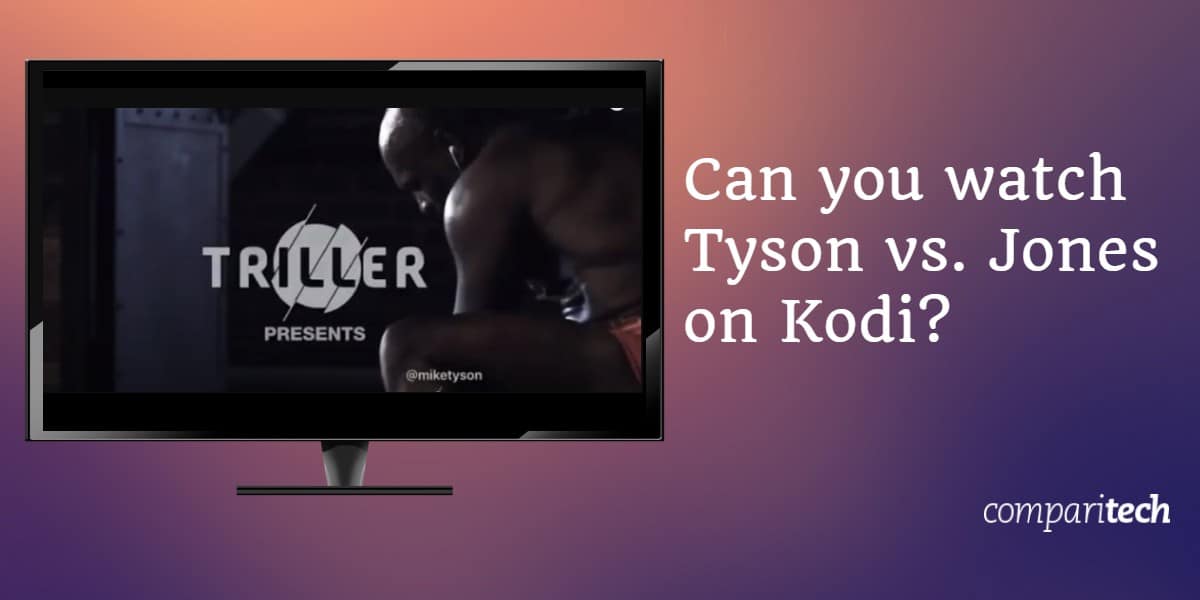 It’s confirmed! Mike Tyson is making a return to the ring. You can watch Mike Tyson go head-to-head with Roy Jones Jr. on November 28. While the Tyson vs Jones live stream will take place on Triller (more on that later), it’s also scheduled to be a pay-per-view event. What’s more, Triller paid $50 million for the exclusive rights. Whether or not you can watch Tyson vs Jones on Kodi will depend on a few factors.

The full streaming details for the Tyson vs Roy Jones Jr. fight are still up in the air. This guide will explain whether it may be possible to live stream the fight on Kodi, and if so, which Kodi addons may be your best options to stream the event.

Our guide will only discuss legitimate options for Tyson vs Jones live streaming on Kodi. At present, this event is designated to stream on Triller and only as a PPV event. There’s a high chance that some unofficial Kodi addons will emerge that stream the event illegitimately. While we will discuss that potential, we only advocate for and recommend streaming through official sources.

Tyson vs Roy Jones Jr is confirmed to be on Triller as Pay-Per-View. However, it may appear on other locations outside the US. If you are traveling abroad, you may need a VPN to access legally-available free streams.

READER DEAL:Save 57% on IPVanish for fast, private streaming on Kodi.

At present, we cannot confirm or deny whether you’ll be able to watch the Nov. 28 exhibition fight between Mike Tyson and Roy Jones Jr. on Kodi. The only confirmed streaming location is the social media app Triller, which paid $50 million for exclusive rights to the fight.

However, there is very little information regarding which regions Triller will broadcast the fight in. For example, Triller may have secured broadcast rights for the US, but not for Canada, the UK, Germany, or elsewhere. If that’s the case, streaming locations and prices to access the fight will vary across countries. It may also mean that an available Kodi addon will have the fight once it airs.

The Tyson vs Jones Fight was originally scheduled for September 15. It was delayed in early August. The reasons for the delay are not clear, although CBS Sports reports part of the delay may be due to attempts to work out international broadcast rights. If true, that lends to the idea that the fight may be available on Kodi through a Kodi addon that already exists.

How to Watch Tyson vs Jones on Kodi with a VPN

If streaming options emerge for the fight emerge on Kodi, they will likely be geo-locked. If you’re trying to watch from abroad, you’ll need a Virtual Private Network (VPN) to bypass those geographic streaming restrictions.

Here’s how to watch Tyson vs Jones on Kodi:

Always test your VPN option prior to the start of any event. Things can change, so you’ll want to give yourself time to test a different VPN to avoid missing any of the action.

How to watch Jones vs Tyson on Kodi

As noted earlier, Jones vs. Tyson is only slated to stream on Triller. There is no Triller Kodi addon at this time of writing. To that end, you won’t be able to watch Jones vs Tyson on Kodi if nothing changes come the day of the fight.

If CBS Sports is accurate in its prediction that other Pay-Per-View services will cover the fight, then we may see BT Sport Box Office carry the fight in the UK and Ireland, and potentially see DAZN carry the fight in several of its markets, including Canada and Germany.

Should DAZN pick up the fight, it will be the best option for Kodi users, as DAZN is the only legal sports streaming service with an available app for Kodi that covers major live fighting sports from major names in boxing and MMA.

How to install the DAZN Kodi addon

DAZN is currently not a confirmed source for the Jones vs. Tyson fight! However, if the fight makes it to DAZN, follow the instructions below to install the DAZN addon on Kodi.

Here’s how to install DAZN on Kodi:

We’d again like to reiterate that DAZN is not currently a reported option for the Jones vs. Tyson fight exhibition fight scheduled for November 28. It is, however, one of the best apps for fighting sports, so it may be an option as contracts continue to be negotiated.