The pressure is building, with the men’s quarter-finals at Wimbledon approaching. We explain everything about this event, including how to watch Djokovic vs Fucsovics live online abroad.
Ian Garland Streaming, Kodi and VPN Expert 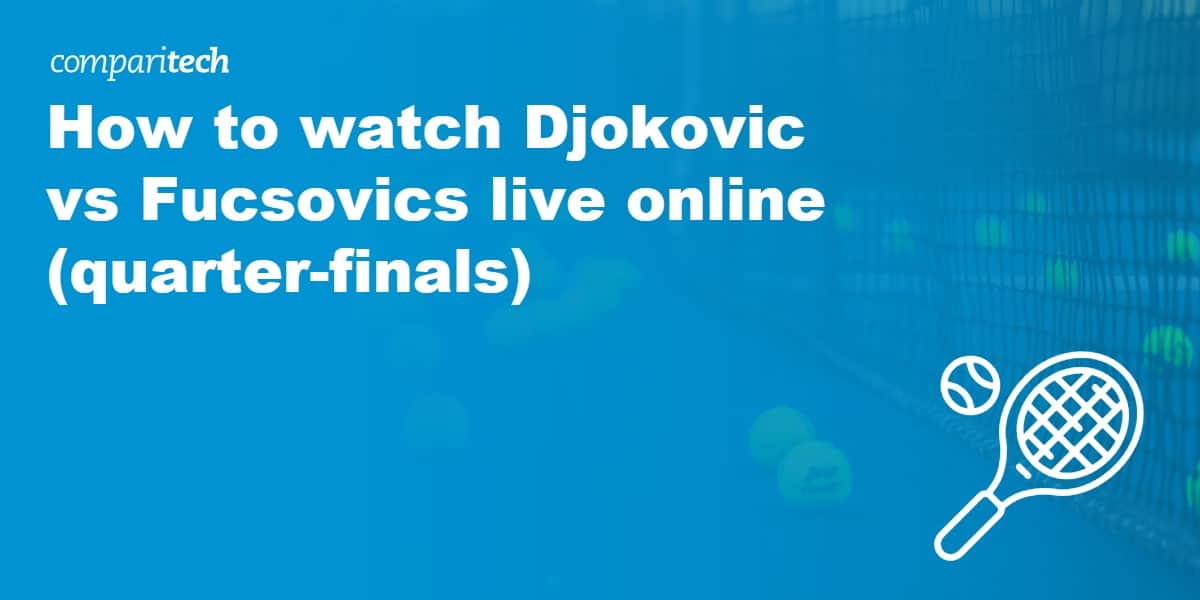 After a year’s delay, Wimbledon is back! Best of all, it’s being broadcast all over the world, making it easy for tennis fans to stream every nail-biting moment live. Take the Djokovic vs Fucsovics match on July 7, for instance: will the reigning champion take his third straight Wimbledon victory (and coincidentally, third Grand Slam of the year)? In short, this is one match you can’t afford to miss. Luckily, you won’t have to, since we’re about to let you know how to watch it live online.

Ask anyone which tennis tournament has the highest profile and they’ll most likely say Wimbledon. Unfortunately, though, this popularity means that there’ll almost certainly be unlicensed streams available. We recommend using official sources instead, since these guarantee the best-possible video quality and can’t be taken down for copyright violation. Besides, with plenty of legitimate sources (many of which are free), there’s no need to go anywhere else.

Most services showing Wimbledon matches are region-locked. This means that you will most likely need a Virtual Private Network (VPN) to watch via your usual streaming platforms while traveling abroad.

How to stream Djokovic vs Fucsovics live online from anywhere

So what is a VPN? Simply, these are privacy tools that can encrypt your internet traffic and hide your true location from snoopers. A side-effect of this is that they also allow you to bypass geographic restrictions as easily as changing to a server in a different country. Here’s how to watch Wimbledon online, wherever you are:

Wimbledon matches will be shown live. This means that if you run into last-minute technical trouble, you could end up missing part of the action. To prevent this, we recommend taking some time and making sure your VPN works properly ahead of time.

NordVPN offers a fully-featured risk-free 30-day trial if you sign up at this page. This means that you can use our #1 VPN for watching Wimbledon without any restrictions for a full month. This is perfect for anyone hoping to stream live tennis while abroad.

How to watch Djokovic vs Fucsovics for free on US TV

ESPN and Tennis Channel will both have full coverage of this year’s Wimbledon tournament. Both networks allow you to sign into their website with your cable provider details, but thankfully, there are plenty of other ways to watch Wimbledon online without cable too.

For instance, you could sign up for a digital Tennis Channel pass. We wouldn’t recommend it, though, since these cost $109.99 USD per year and there’s no monthly subscription available. Instead, you’d be far better off using a service like YouTube TV to log into ESPN. While this platform usually costs $64.99 per month, it offers a two-week free trial, which is long enough to stream the remainder of the tournament. You could also log in with FuboTV, Hulu with Live TV, or Sling TV, if you’d prefer.

Due to regional restrictions, you’ll need a VPN to access any of these services from outside of the US. NordVPN offers a 30-day money-back guarantee, though, allowing you to try it out for yourself, completely risk-free. If you’re not impressed, just cancel for a full refund.

Where else can I live stream Djokovic vs Fucsovics online?

There’s always huge amounts of international interest in Wimbledon; it’s only natural, after all, with players coming from all around the world to compete. The good news is that fans will be able to stream the tournament in dozens of countries. Take a look below to find out how:

The UK is another region where there are two networks sharing Wimbledon coverage. First, there’s Eurosport, which costs £4.99 per month. Unless you’re already subscribed, though, we’d recommend watching on BBC iPlayer instead. This offers all of the same coverage and is completely free to use (though a free account is required before you can stream anything).

Remember: UK law says that you must have a TV license to watch anything as it’s being broadcast on TV, or to watch anything on BBC iPlayer. However, neither platform actually verifies whether you have one, instead simply asking users to click a button to confirm they do.

Both of these services are geo-blocked. As a result, you’ll have to use a VPN to watch Wimbledon on them while traveling outside of the UK.

There’s only one place Canadians can watch Wimbledon 2021 online. TSN will show every match live, with replays available shortly afterwards. Here’s the best part: if you already receive TSN as part of your cable package, you can just login and watch online at no added cost. On the other hand, if you’re hoping to stream Wimbledon online without cable, you’ll have to purchase an online pass. These are $19.99 CAD per month or $7.99 per day.

TSN is currently only available in Canada. In other words, those traveling abroad won’t be able to access it without a VPN.

Channel Nine will have live coverage of each day from 8 PM AEST. This means that you can stream most of the tournament, free of charge, on 9Now. You will need an account but signing up is quick and easy.

If 9Now’s coverage isn’t enough, you can turn to Stan Sport. This boasts every single match, on every court, for the duration of Wimbledon. However, this doesn’t come cheap: Stan Sport costs $10 AUD on top of the price of a regular Stan subscription (also $10). That said, Stan Sport and Stan come with a seven-day and 30-day free trial, respectively, so you can effectively watch for free as long as you remember to cancel before being charged.

9Now and Stan are both geo-restricted, so if you’re traveling abroad at the moment, you’ll need a VPN to access them.

Even if your country isn’t listed above, it’s likely there’s an official broadcast partner you can use to live stream Wimbledon 2021 online. Just take a look at Wimbledon’s international broadcaster list to find out which services are showing the tournament where you are.

Who is expected to win: Djokovic or Fucsovics?

Djokovic is the favorite here, by a wide margin. After all, he’s the top-ranked singles player in the world at the moment. Further, he has won Wimbledon the last two times it was held, and five times in his career. His opponent, however, has never made it to this stage of the competition before and has previously struggled to escape the quarter-finals of other Grand Slam contests.