How to watch Wimbledon 2022 live online for free

You can watch Wimbledon 2022 live online from anywhere in the world this year. Some sources even offer free live streams, although you may need a VPN to get international access.
Sam Cook Data journalist, privacy advocate and cord-cutting expert 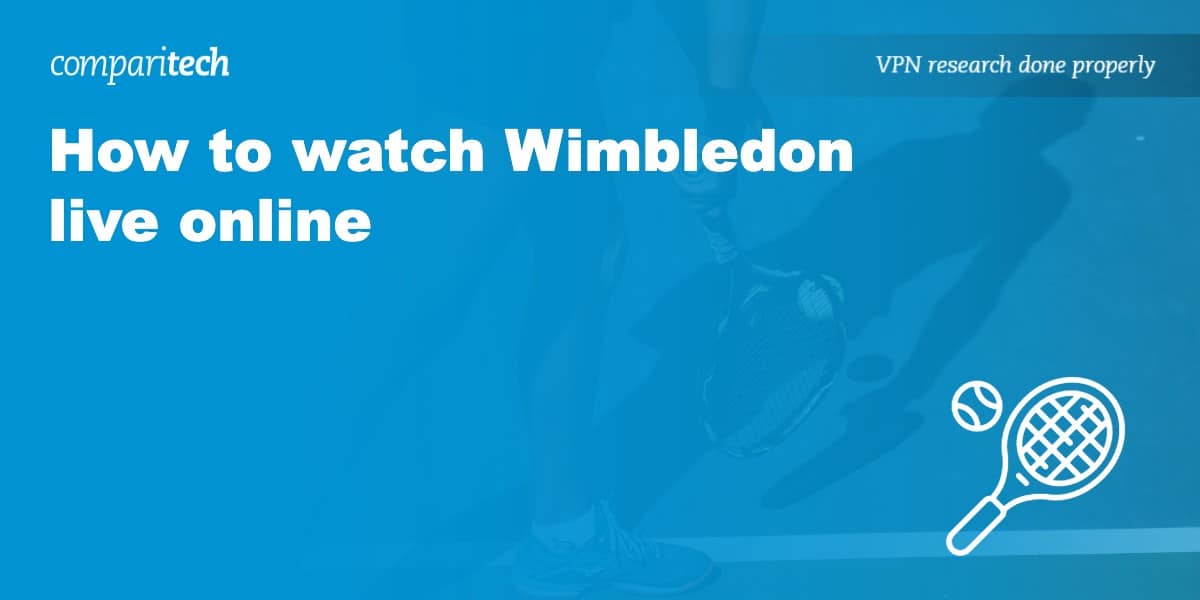 Want to watch Wimbledon 2022 online? Find out where you can live stream Wimbledon 2022 for free. We’ll even explain how you can do this while traveling abroad with the help of a VPN.

Wimbledon is back for 2022! The entire schedule, including qualifiers, is scheduled to run from June 27 to July 10. Thanks to the popularity of this famous tennis tournament, there will be wide TV coverage from numerous broadcasters. There will also be free TV streams worldwide. However, most broadcasting streams will be geo-blocked due to licensing agreements. If you find yourself locked out, you’ll need to use a Virtual Private Network (VPN) to access those some Wimbledon streams abroad.

Note that this guide only recommends official sources for streaming Wimbledon 2022. While the sporting event will be available on many illegal streaming sites, these often deliver poor quality and may even host malicious advertisements. Some unlicensed streams will even be taken offline for copyright infringement. Thanks to several international broadcasters offering the event for free, there’s no need to turn to sketchy websites for your Wimbledon 2022 live streams.

Most services broadcasting Wimbledon 2022 are region-locked. If you’re traveling abroad, you’ll need a VPN to continue watching via your usual platform from home.

How to watch Wimbledon 2022 online with a VPN

You can use a VPN to connect to a server in another location. In doing so, you’ll be assigned a different IP address, allowing you to spoof your location. You can then unblock websites and services that would otherwise be geo-restricted.

Here’s how to live stream Wimbledon 2022 using a VPN:

You may be able to watch Wimbledon events on-demand later, but this event will be broadcast live. As such, we recommend you test your VPN with streaming sources well in advance. If you have any trouble, you can always contact your VPN’s customer support for further assistance.

How to watch Wimbledon 2022 for free on UK TV

As in previous years, you’ll be able to watch Wimbledon online for free on BBC iPlayer. In order to do this, you’ll need to sign up for an account (don’t worry, it’s free!). You’ll be asked to provide an email address as well as your date of birth, country, and a UK postcode (note that any UK postal code is accepted). Once signed in, you’ll be able to access all BBC iPlayer content, live and on-demand.

BBC iPlayer is only available in the UK. This means that if you’re traveling abroad, you’ll need to connect to a VPN server in the UK in order to watch. Once you have a UK IP address, all content should be unblocked in your location. NordVPN successfully unblocks BBC iPlayer and even comes with a 30-day money-back guarantee. As such, you can try it out risk-free and, if unsatisfied, request a refund for your money back.

Where else can I stream Wimbledon 2022 online?

ESPN has held the US broadcast rights to Wimbledon since 2012. In order to watch online via ESPN, you’ll need a US cable TV subscription. This requires signing in to ESPN using the same login details you use with your cable TV provider (an email address or username and password).

If you don’t have cable, it’s worth knowing that you can watch ESPN cable-free via the following TV streaming services:

Some of these services provide free trials or discounts on the first month or two of service.

Much like BBC iPlayer, ESPN and the aforementioned TV streaming services are geo-blocked. To access their content abroad, you’ll need to get a US IP address which you can get by connecting to a VPN server in the US. You will also need a US credit card to create accounts with these services.

There are a couple of ways to watch Wimbledon 2022 in Canada: CTV and TSN. Both services offer apps available and you can stream content for either service online on the web. However, you will need to pay to access CTV and TSN. You may already have access to CTV if you have cable TV. In this case, all you need to do is sign in. TSN offers daily ($7.99 CAD), monthly ($19.99), and six-month ($99.95) plans.

Traveling abroad? You can watch CTV and TSN outside Canada but you’ll need a Canadian IP address. Once connected to a VPN server in Canada, all content should then play without restriction.

Tennis fans in Australia can stream Wimbledon 2022 live online. Commencing in 2022, Stan Sport has a three-year deal to broadcast Wimbledon. The following plans are available: Basic ($10 AUD/month), Standard ($14/month), and Premium ($19/month). All plans include a 30-day free trial for new customers. A VPN connection to an Australian server is required to access the streams from abroad.

What should I know about Wimbledon?

Founded in 1877, Wimbledon is the oldest tennis tournament in the world. It’s held at the All England Club in Wimbledon, London and played outdoors on grass courts. Alongside the Australian Open, the French Open, and the US Open, it’s one of the four Grand Slam tennis tournaments. Due to the COVID-19 pandemic, Wimbledon 2020 was canceled. This was the first time that the tournament had been canceled since World War II.

Who are the favorites to win Wimbledon 2022?

On the men’s side of the draw, the current favorite to win Wimbledon is Novak Djokovic. Considering his recent woes at the Melbourne Open (where he was hotly tipped to win for a record 9th time), one can only assume that Djokovic will be on the warpath to win everything else this year.

Matteo Berrettini is currently the second favorite, with Stefanos Tsitsipas in third. Fan-favorite Rafael Nadal is currently just outside of the top three. However, due to his prowess on the grass, you should never really count him out.

On the women’s side of the draw, Naomi Ossaka is currently a +700 favorite. However, she is actually tied with Emma Raducanu as favorite with most bookies. This will no doubt change as we get closer to the tournament. Aryna Sabalenka is currently third favorite.

How to watch Wimbledon live stream in 4K?

First off, in order to watch a Wimbledon live stream in 4K, you’ll need a 4K display, be it your TV or a PC monitor. While little information is available regarding 4K streams of Wimbledon 2022, the BBC did stream Wimbledon in 4K in 2018. Virgin Media TV did the same in 2019. As such, there’s likely to be more than one option for watching Wimbledon 2022 in 4K. You can then watch online by using the BBC iPlayer or Virgin TV Go apps.

Will Wimbledon 2022 be played behind closed doors?

No. Wimbledon briefly closed its gates due to the Pandemic in 2020, but in 2021 it reopened with a limited capacity on each court. This year, the tournament is expected to proceed with health and safety measures in place that comply with the British government’s guidelines.

Anybody who wants tickets to the tournament can purchase them from regular ticket outlets (the Queue and Ticket Resale). Please bear in mind that there will be o public ballot this year. Instead, those who were offered tickets in 2020 will be offered tickets again this year. It will redistribute any tickets that those people do not take up. However, Wimbledon has not yet detailed how people can register to get those tickets

Below is the schedule of events. For complete brackets, visit the Wimbledon website for draws and updated brackets.