How to watch Djokovic vs Shapovalov online free (semi-finals)

Hoping to watch Wimbledon 2021 live online for free? We’ll explain how to stream the Djokovic vs Shapovalov match without cable, from anywhere in the world (even abroad).
Ian Garland Streaming, Kodi and VPN Expert 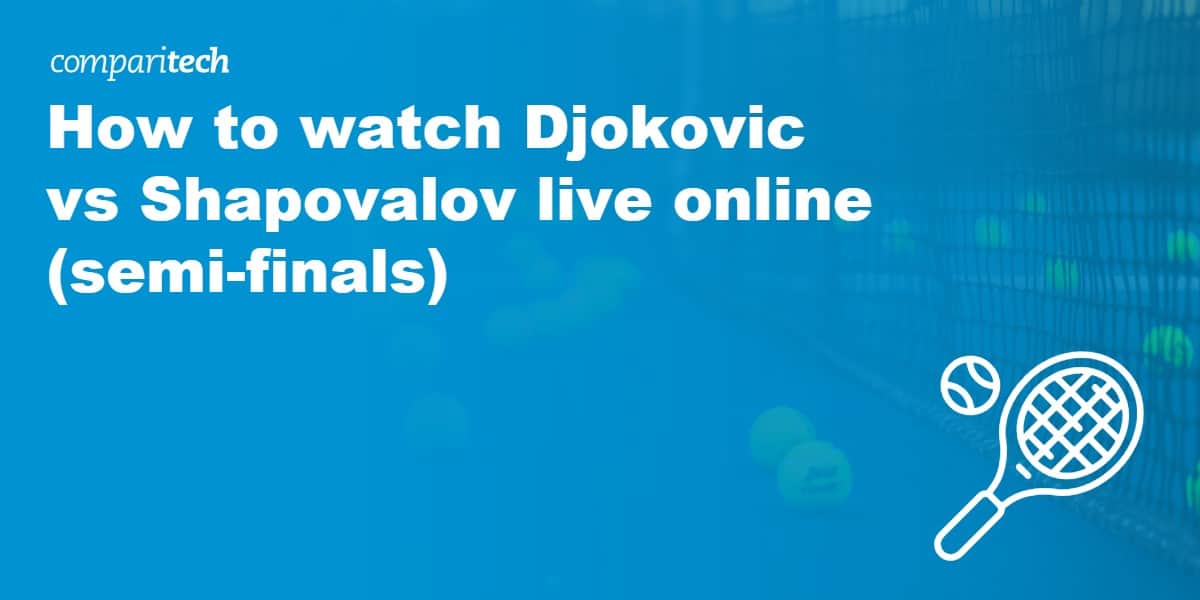 The end of the tournament is fast approaching but there’s still plenty of excitement to look forward to. Djokovic will go head-to-head with Shapovalov on July 9 for the right to play in the 2021 Wimbledon final. In other words, this is an incredibly high-stakes match, and one you won’t want to miss. Luckily, you’re about to find out how to watch Djokovic vs Shapovalov at Wimbledon online for free.

There are almost always unofficial sources for major sporting events, but even if you stumble across one, we wouldn’t recommend using it. Official streams provide the highest-possible video quality and they can’t be taken down for copyright violation. In contrast, third-party streams are often laggy, low-resolution, and unreliable. There are dozens of free-to-watch networks showing this match around the world, meaning there’s simply no need to use unauthorized streams.

Many of the services showing Wimbledon can only be used in specific countries. As such, you’ll most likely need a Virtual Private Network (VPN) to access your usual streaming services while traveling abroad.

How to live stream Djokovic vs Shapovalov online from abroad

VPNs are digital privacy tools capable of encrypting your web traffic and hiding your true location from snoopers. They also enable you to choose where you appear to be browsing the web from. This functionality makes it extremely simple to access your usual services while traveling abroad. Below, we’ll walk you through the process step-by-step.

Here’s how to watch Djokovic vs Shapovalov online from anywhere:

Djokovic vs Shapovalov will be shown live around the world. To prevent last-minute technical trouble from causing you to miss the match, we strongly recommend testing your VPN beforehand. If you run into any issues, most providers have a 24/7 support team just waiting to help you out.

NordVPN offers a fully-featured risk-free 30-day trial if you sign up at this page. This means that you can use our #1 VPN for streaming Wimbledon online without any restrictions for a full month. This is great for anyone looking to watch tennis abroad.

How to watch Djokovic vs Shapovalov for free on US TV

This year’s Wimbledon tournament will be broadcast in full on ESPN and Tennis Channel. This means that if you already receive access to these channels via cable TV, you’ll be able to live stream Djokovic vs Shapovalov online at no added cost.

If you’re looking for a way to watch Wimbledon online without cable, you’re in luck. That’s because plenty of major streaming services carry ESPN. These include Hulu with Live TV, FuboTV, and YouTube TV, all of which offer a free trial that’s long enough to watch every remaining match. We’d recommend you set a reminder to cancel, though, since these services normally cost $64.99 USD per month. Additionally, you can watch via Sling TV; it’s currently running a promotion where your first month costs just $10 (usually $35). Tennis Channel has its own online pass, but you have to pay for a year upfront ($109.99) so we don’t recommend it.

As all of these services are geo-restricted, you’ll need a VPN to use them outside of the US. NordVPN plans all come with a 30-day money-back guarantee, meaning you can try it risk-free. If it doesn’t meet your expectations, you can cancel for any reason and receive a full refund.

Where else can I watch Djokovic vs Shapovalov online?

As one of the sport’s biggest tournaments, international streaming rights to Wimbledon were always going to be highly sought-after. This is great for fans, since it means more ways to watch the matches online. Here’s how to stream Djokovic vs Shapovalov where you are:

Two broadcasters have the rights to show Wimbledon 2021 in the UK: BBC and Eurosport. Fans can watch Djokovic vs Shapovalov and every other match live or on-demand using BBC iPlayer (which is free) or Eurosport Player (£4.99 per month with no free trial).

For legal reasons, you’ll need a TV license if you plan to watch this match on BBC iPlayer, or live anywhere else. However, other than a quick prompt, neither this nor Eurosport has any verification in place to see if you actually have a license.

Both platforms are region-locked. This means that you’ll have to use a British VPN server to watch Wimbledon on them while traveling abroad.

If you’d like to live stream Wimbledon fixtures like Djokovic vs Shapovalov while in Canada, there’s only one option: TSN. Existing TV subscribers can simply log in with their cable provider details and start watching online right away. Everyone else, however, will have to pay $7.99 CAD for a 24-hour pass or $19.99 for a month-to-month subscription.

TSN is geo-blocked and normally only available in Canada. By connecting to a Canadian VPN server, you’ll be able to use this service as normal, wherever you are.

Australian tennis fans will be able to watch most of this year’s tournament for free on 9Now. The only catch is that you’ll have to register first, but this isn’t difficult and only takes a minute.

If you’d like to stream every match, you can sign up for Stan Sport instead. This new addon to the Stan service comes with a seven-day free trial, while Stan itself has a 30-day trial. In other words, if you sign up now, you’ll be able to watch the rest of the tournament for free. When you’re done, be sure to cancel both subscriptions, since they each cost $10 AUD per month.

These services are geo-restricted. If you’re traveling at the moment, you’ll have to use an Australian VPN server to unblock them.

If you didn’t see your country listed above, try not to panic. After all, with more than 50 international networks showing this year’s Wimbledon tournament, there’s almost certainly a local source that’ll work for you. To find out where you can stream Djokovic vs Shapovalov, just consult the official list of Wimbledon broadcasters.

Who is the favorite: Djokovic or Shapovalov?

Djokovic is the favorite in every match he plays, by virtue of being the top-ranked men’s singles player in the world. What’s more, he’s extremely familiar with this level of play, having won Wimbledon outright five times before. In contrast, Shapovalov is currently the world’s #12 and has never made it past the quarter-final of any Grand Slam tournament.