We’re about halfway through Wimbledon but the players are just starting to get serious. Below, we’ll tell you where to watch Khachanov vs Shapovalov online, and explain how to stream Wimbledon abroad.
Ian Garland Streaming, Kodi and VPN Expert 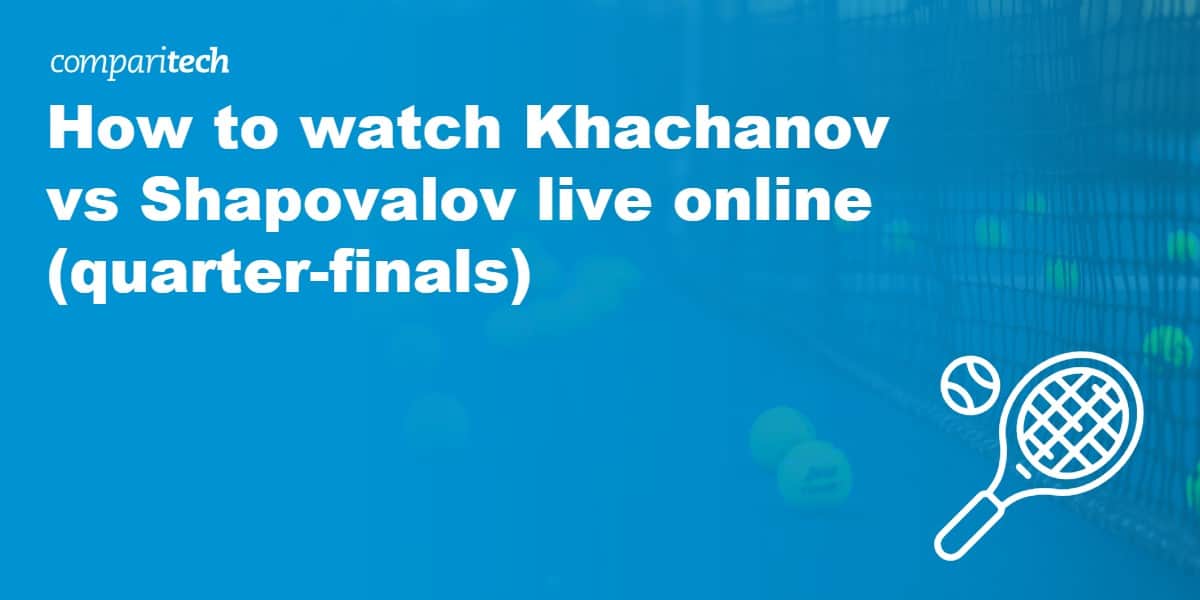 Last year’s Wimbledon tournament was canceled, so tennis fans have been waiting a long time without very much to occupy them. Luckily, that’s no longer an issue; Wimbledon 2021 promises scores of world-class matches including Khachanov vs Shapovalov on July 7. Spectator numbers are limited until the last two days of play but there’s no need to worry since you’ll be able to live stream Khachanov vs Shapovalov and every other match live online. Take a look below to find out how.

Although third-party streams might be available, we strongly advise you stick with official sources. Even setting legal issues aside, official streams provide a higher video quality and can’t be taken down mid-way through for violating copyright agreements. What’s more, many of these are free to watch, which makes unauthorized streams effectively pointless.

Many of Wimbledon’s international broadcasters are geo-restricted. As such, if you’re traveling abroad at the moment, you’ll most likely need a Virtual Private Network (VPN) to watch Khachanov vs Shapovalov on your usual streaming services.

How to watch Khachanov vs Shapovalov live online from anywhere

VPNs encrypt your internet traffic, preventing anyone from seeing what you do online. However, as they also change your IP address, you can use them to spoof your location and get around regional streaming restrictions.

Here’s how to watch Khachanov vs Shapovalov from anywhere:

This fixture will be broadcast live, which is why we recommend you make sure your VPN is capable of unblocking your chosen streaming service beforehand. This only takes a minute or so and could help prevent you from missing the match entirely.

NordVPN offers a fully-featured risk-free 30-day trial if you sign up at this page. This means that you can use our #1 VPN for streaming Wimbledon live with no restrictions for a full month. This is perfect for anyone hoping to watch the quarter-finals while traveling.

How to stream Khachanov vs Shapovalov for free on US TV

There are two ways to live stream Khachanov vs Shapovalov in the US. Tennis Channel and ESPN are both showing the full 2021 Wimbledon tournament, and if you already receive these channels in your cable plan, you can just log into the website or app and watch at no added cost.

Hoping to watch Wimbledon online without cable? You have several options, but the best is probably YouTube TV. This service is currently offering a two-week free trial, so you can just sign up, watch the rest of Wimbledon for free, and cancel to avoid being charged. You might want to set a reminder to do this, though, since YouTube TV is usually $64.99 USD per month.

Users can also stream ESPN live on Sling TV, FuboTV, and Hulu with Live TV. At the moment, all of these either offer a free trial period or a steep discount on your first month. Finally, Tennis Channel has its own online subscription — this has no monthly plan and costs $109.99 per year, making it an extremely poor choice unless you’re a huge tennis fan.

These services are all geo-blocked. That said, you can access them from anywhere using the right VPN. Don’t have one yet? NordVPN plans all include a risk-free 30-day money-back guarantee. If it fails to meet your expectations in any way, just cancel for a full refund.

Where else can I watch Khachanov vs Shapovalov online?

This year’s Wimbledon tournament is being broadcast the world over, which makes it extremely easy for you to stream Khachanov vs Shapovalov online. Below, we’ve created an at-a-glance guide that explains which networks are showing this match in your country:

If you’re in the UK, you have the choice of watching Wimbledon on BBC iPlayer or Eurosport. Both platforms will have the exact same coverage (they’re showing every match live, with on-demand replays available afterward), although BBC iPlayer is free to watch, while Eurosport costs £4.99 per month.

If you decide to watch on BBC iPlayer, or follow the action live on Eurosport, you’ll need a TV license. Surprisingly, despite this being a legal requirement, neither platform actually makes sure that you have one. Instead, they just require users to click a button saying that they do.

Due to regional restrictions, you’ll have to either be in the UK or using a British VPN server to watch Wimbledon on these platforms.

TSN is the only network showing Khachanov vs Shapovalov online. It will, of course, offer live broadcasts of every other Wimbledon match, with replays coming shortly after each finishes. Already a TSN cable customer? If so, feel free to log into the website or TSN Go app and start watching right away. Don’t worry if you don’t have cable: online passes are available for $7.99 CAD per day or $19.99 per month.

If you’re outside of Canada, you’ll need a VPN to use TSN.

The biggest matches of each day will be shown live on 9Now, and made available on-demand a short time later. This platform is completely free to use, and while an account is required, signing up only takes a second.

Stan Sport has more comprehensive coverage, with every matchup of the entire tournament. Normally, this’d cost an extra $10 AUD per month on top of a $10 Stan subscription, but as there’s a seven-day free trial (and a 30-day trial for Stan itself), you can effectively stream this match and the remainder of Wimbledon for free. Just remember to cancel both Stan and Stan Sport so you aren’t charged.

Both of these platforms are geo-blocked. If you’re traveling outside of Australia at the moment, you’ll need a VPN to use them.

Thankfully, the Wimbledon organizers have put together a comprehensive list of official broadcast partners. This saves you from having to manually research which service is showing each match in your country and makes finding a suitable source as easy as possible.

Who is the favorite: Khachanov or Shapovalov?

These players are fairly evenly-matched, although Khachanov looks to be the slight favorite, having won four titles previously, to his rivals one. Additionally, he’s more experienced at Wimbledon, having made it to the fourth round once already. For context, Shapovalov has only ever made it to the second round at this tournament. That said, Shapovalov has been in excellent form of late, and is currently the world’s #12 (Khachanov is ranked #25 at the moment).