How to watch Hughie Fury vs Pavel Sour live online

Want to be able to watch Hughie Fury vs Pavel Sour online while traveling abroad? Below, we’ll explain how you can use a VPN (Virtual Private Network) to live stream the Fury vs Sour fight from anywhere.
Mark Gill TECH JOURNALIST, VPN AND PRIVACY SPECIALIST 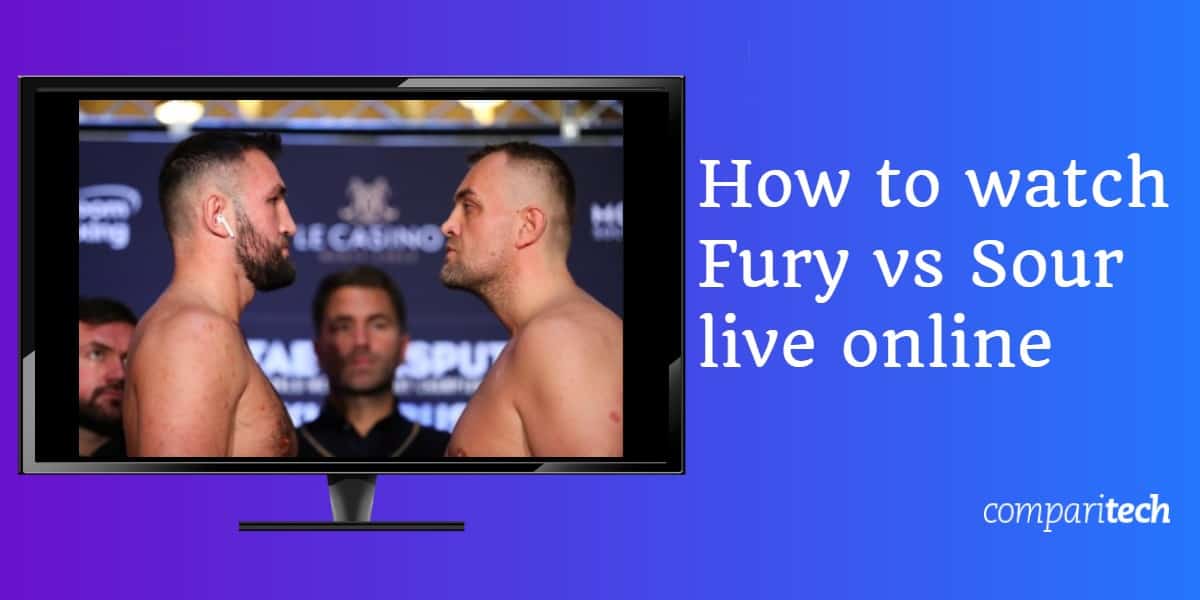 Hughie Fury vs Pavel Sour will take place at the Manchester Arena on Saturday, March 7, from 6:30 PM GMT (1:30 PM EST / 10:30 AM PST). Fans certainly have a lot to look forward to, since there are plenty of other world-class fights on the card including Quigg vs Carroll and Hyland vs Sanchez. Read on to find out how you can watch Fury vs Sour online from abroad (outside of the UK) with a Virtual Private Network (VPN).

Please note that we’re only recommending official sources for watching Hughie Fury vs Pavel Sour. While there are often plenty of unlicensed streams available for sporting events such as this, we don’t recommend using them. Unofficial streams tend to be of inferior quality, with laggy, low-resolution video. Besides, there are numerous legitimate ways to live stream Hughie Fury vs Pavel Sour that won’t force you to compromise on quality.

The Fury vs Sour fight will only be shown on region-locked platforms. If you want to watch it on your usual streaming services while abroad, you’ll need to connect to a VPN.

While VPN can seem complicated at first, they’re actually quite easy to use. By connecting to a server in another country, you can obtain a new, temporary IP address. You can then use this to unblock services that would otherwise be unavailable in your region. For example, having a UK IP address allows you to watch Sky Sports while outside of the UK.

Here’s how to live stream Hughie Fury vs Pavel Sour online, from anywhere:

As the Hughie Fury vs Pavel Sour fight will air live, we recommend you test your VPN ahead of time. This reduces the risk of missing out on the event as you’ll have time to contact your VPN’s customer support should any issues arise.

Fury vs Sour will be shown on Sky Sports Action. If you already have a Sky Sports subscription, you simply need to sign in to the Sky Go app to watch the fight online. The good news is that it’s also possible to watch Fury vs. Sour without having to commit to a lengthy Sky Sports contract. This option is available via Now TV which offers daily (£9.99), weekly (£14.99), and monthly (£33.99) passes. Note that Sky Sports Action is also available on the Mobile Month Pass which costs £5.99 per month.

Regardless of the option you choose, you’re going to need a VPN if you’re planning on live streaming Hughie Fury vs Pavel Sour from abroad. That’s because Sky Sports content is geo-restricted and only available in the UK. You can unblock Sky Go and Now TV outside the UK with a VPN. All you need to do is connect to a server in the UK to get a British IP address and you’re all set! Note that ExpressVPN comes with a 30-day money-back guarantee. As such, you can try it risk-free and claim a full refund if unsatisfied.

Where else can I watch Hughie Fury vs Pavel Sour?

If you’re in the United States or Canada, you’ll be able to watch Fury vs Sour on DAZN. This subscription sports streaming service costs $19.99 USD (or $20 CAD) per month, while an annual subscription is priced at $99.99. Additionally, Canadian users get their first month for free.

You may be able to watch DAZN abroad by connecting to a VPN. However, it’s worth keeping in mind that DAZN is particularly difficult to unblock and most VPNs are unable to bypass the restrictions. At the time of writing, ExpressVPN was able to unblock DAZN Canada.

What should I know about the Fury vs Sour fight?

Hughie Fury will meet Pavel Sour in a 10-round heavyweight fight as part of the World Championship Boxing taking place at Manchester Arena. This fight was originally scheduled for November 2019 but was canceled after Fury withdrew due to illness. It’s one of several matchups before the main event of Quigg vs Carroll — two super-featherweight contenders that will meet in an England vs. Ireland clash.

Who is the favorite to win the Fury vs Sour fight?

Fury (23-3, 13 KOs) is the heavy favorite to win this heavyweight fight. The British boxer has won 23 of his 26 professional fights. However, his most recent fight was a loss to Alexander Povetkin by unanimous decision. While Pavel Sour (11-2, 6 KOs) has won as an underdog beating the previously undefeated Tomas Salek, he has only fought outside Czech Republic twice, losing both fights.