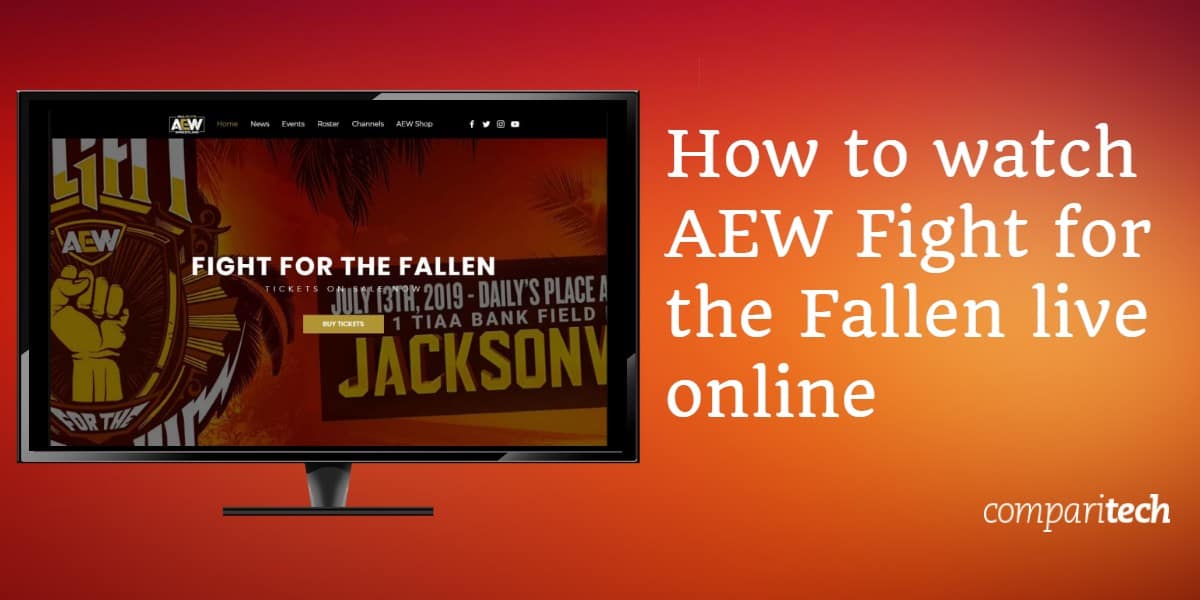 On July 13, some of AEW’s most recognizable faces will descend upon Daily’s Place Amphitheater in Jacksonville, Florida to take part in Fight for the Fallen: a show which is designed to raise money for victims of gun violence. The preshow will begin at 4:30 PM PST (7:30 PM EST), with the main event starting an hour later. Below, we’ll explain how to stream AEW’s Fight for the Fallen in the USA, the UK, Canada, Australia, or anywhere else in the world.

It’s important to note that we’ll only be recommending official sources to live stream AEW Fight for the Fallen for free. The AEW is becoming more popular by the day, making it more likely that unlicensed streams will be available. However, these are usually laggy and only offer low-resolution video. Plus, unauthorized streams can be taken offline for copyright violation at any moment, so you might not get to see who wins. As you can stream Fight for the Fallen for free anyway, there’s no benefit to using unreliable, unofficial streams.

AEW Fight for the Fallen will only be shown on region-locked streaming services. As a result, you’ll need a VPN to watch it from outside the US or Canada.

How to watch Fight for the Fallen abroad with a VPN

There’s no need to worry; with the right VPN, unblocking geo-restricted streaming services is easy. Follow the steps below to stream AEW Fight for the Fallen without cable from anywhere:

As this event will be broadcast live, we strongly recommend testing your VPN with the steps above well before Fight for the Fallen is due to start. This approach ensures that if you run into any problems, you’ll still have time to get help from your VPN’s customer support team and might not have to miss the preshow.

If you’re in the US or Canada, you can watch Fight for the Fallen completely free of charge on B/R Live. This service is showing both the pre-show and the main event, so there’s no need to mix and match services to stream every fight. There are a couple of things to note about B/R Live, though: you’ll have to create an account and you can’t watch anything if you have an ad-blocker enabled.

This service is only available in the US and Canada. That said, it’s still possible to use it abroad by connecting to a VPN server in one of these countries. Don’t have a VPN yet? ExpressVPN comes with a 30-day money-back guarantee, allowing you to stream Fight for the Fallen without cable risk-free. If you’re unsatisfied or only needed a VPN for this event, you can just cancel afterward to claim a full refund.

Where else can I live stream Fight for the Fallen?

Fite is the exclusive broadcaster of AEW Fight for the Fallen outside of the US and Canada. This is a paid service and you can purchase a fight pass for $12.99 USD (or £8.99 if you’re in the UK). On the plus side, you can watch Fight for the Fallen as many times as you like the following day at no added cost.

Which wrestlers are expected to win?

Several of the matches at this event appear to be fairly random pairings between wrestlers with no bad blood: Brandi Rhodes vs. Allie and the Young Bucks vs, the Rhodes, for instance. However, with the Bucks/Lucha brothers feud all but over after Fyter Fest, perhaps we’re seeing the beginning of a new crop of storylines.

Adam Page is sure to perform well this time around, since a win at Fight for the Fallen would give him the momentum he needs for his World Championship match against Chris Jericho at AEW All Out in August.

Pentagon Jr. and Fenix will take part in the main fight of the evening for the second time running, although this time, they’re in with a chance at victory. They’re currently on a two-match losing streak so should win by averages alone. Whoever wins, it’s sure to be a memorable match since the Lucha Bros and SCU both love to please the crowd.