Cord Cutting Statistics and Trends in 2020 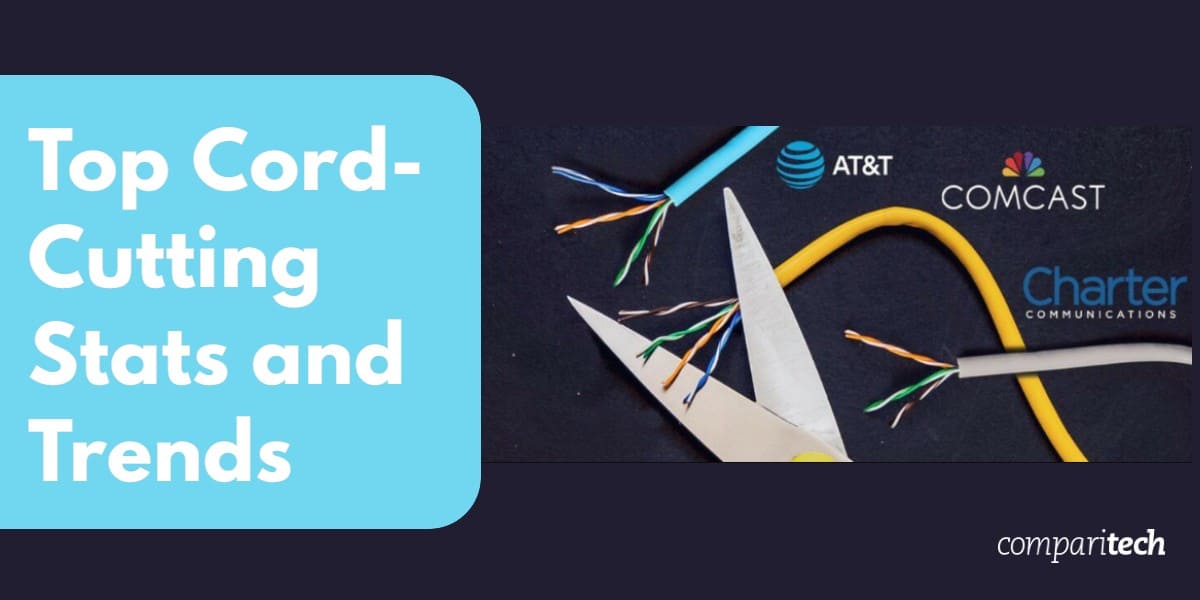 “Cord cutting” is a fast-growing trend among US residents. It involves “cutting the cord” on satellite and cable TV and instead opting for internet TV and streaming services. Although cord cutting is still in its infancy compared to traditional methods for viewing content, its rapid and expanding growth in the past several years means there are plenty of cord-cutting stats and trends available in 2020. Here are the most startling and most interesting cord-cutting facts for the current year and beyond.

Cord cutting is responsible for major cable TV providers losing millions of customers they can’t seem to win back. In fact, traditional pay-TV providers lost over 1.7 million subscribers in the third quarter of 2019 alone.

This bloodletting is expected to continue unabated for the time being. Even Comcast—which has experienced unquestionably the largest loss of cable TV subscribers of the bunch—is not optimistic about its pay-TV prospects. The company predicts it will see even more of its customers dropping its traditional cable TV packages this year.

Many Americans still maintain both traditional TV and cord-cutting services, however. As of 2019, 43% of Americans had both pay-TV and streaming video-on-demand(SVOD) subscriptions.

2. Traditional cable prices are a leading cause of cord cutting

According to the FCC’s 2018 Report on Cable Industry Pricing, the average cost of expanded basic cable services was just over $73.08. That number, however, does not include the cost to purchase or rent equipment from cable TV providers, nor does it include the cost of taxes and fees.

If a 2018 Consumer Reports study is any indication, the FCC’s numbers are way off. Consumer Reports found that the average monthly cable TV bill was over $217, which included the average package cost (over $156), government fees and taxes, company-imposed fees, and the cost of premium serves added to the package.

Many cord cutters instead opt for a live TV streaming service, such as YouTube TV, Hulu with Live TV, or Sling TV, which cost a fraction of that and don’t come with the added fees.

Traditional pay-TV has always been driven by ads, but with more options, ad-hating cord-cutters are starting to see themselves out. A large majority (70 percent) of consumers believe 20 minutes of ads for a program one hour in length is too many. A further 82 percent very much dislike seeing the same ads over and over again. Overall, eight minutes of ads appear to be enough to keep pay-TV subscribers from ditching solely on ads, while 16 minutes of ads is a breaking point for many.

As subscribers abandon their traditional pay-TV providers, they’re now going into the open arms of live TV streaming services. Whether you call them “IPTV” (though that term is more regularly applied to illegal live TV streaming options) or Virtual Multichannel Video Providers (vMVPDs), there are now a handful of internet-based services on the market designed to replace cable and satellite TV.

Subscriber counts for the most-used cable TV replacers include: 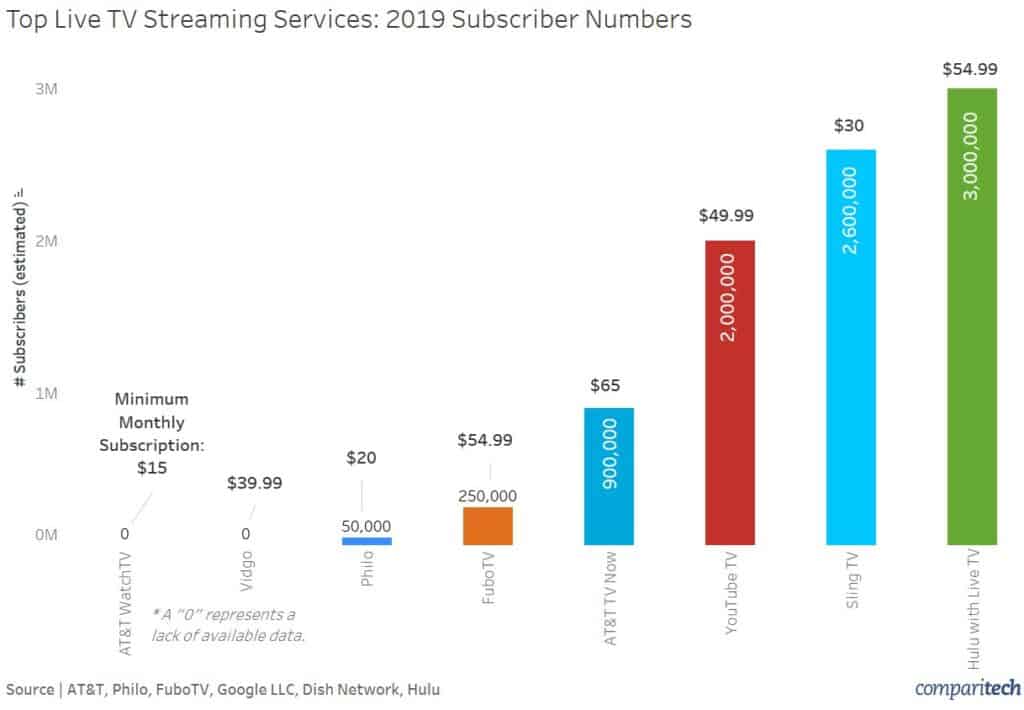 PlayStation Vue would have made that list as well. However, Sony officially dissolved the service at the end of January 2020. PS Vue had around 500,000 subscribers when it shuttered its digital doors.

Other services exist in this space, although their subscriber numbers are difficult to come by. These most notably include AT&T WatchTV and the newer service Vidgo. AT&T excludes WatchTV from its published subscriber counts for over-the-top (OTT) TV services, while Vidgo, which launched in late Q4 2019, has offered no data on how it’s doing thus far.

Even as cord cutting options for live TV slowly make their way to market, their prices have gone up remarkably in the past few years. Almost every live TV streaming service that’s been on the market for more than a year has experienced at least one price increase. Most have imposed multiple price increases since launching.

Almost universally, these price increases were far from insignificant—especially for AT&T TV Now. That service increased its entry-point subscription price in 2019 by 30 percent compared to its price in 2018. Only the now-canceled PlayStation Vue service had more modest price increases across its packages.

Meanwhile, Philo remained the lowest-cost major player despite a pseudo price increase. The company dropped its smaller and cheaper package in favor of a single-package option. (Note: AT&T WatchTV is still the cheapest on the market at $15 per month.)

Aggregated Google Trends data reveals that cord-cutters are increasingly interested in live TV streaming services, with no signs of stopping. In fact, aggregated search interest from 2015 to 2019 for the top seven largest OTT services reveals search interest in these services was the highest it’s ever been in September 2019. 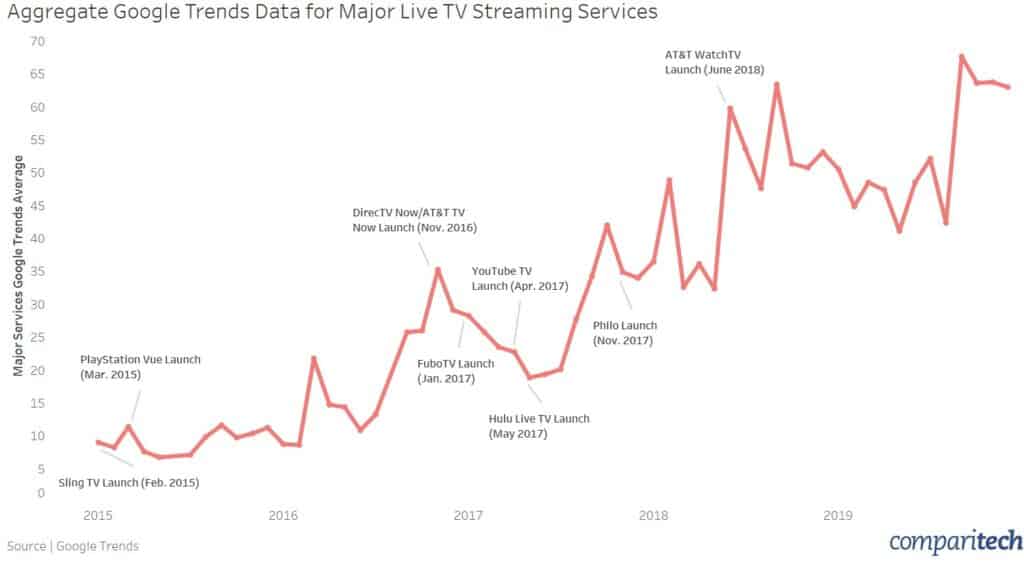 Sling TV was the first major cord-cutting service to launch on the market, offering an “a la carte” live TV model. It was later followed by PlayStation (also 2015). Meanwhile, 2017 was a breakout year for this niche as five out of the seven largest multi-channel streaming TV providers launched that year. The most recent major service launch was AT&T WatchTV, which entered the market in 2018. WatchTV was a direct response to the no-sports Philo.

We did not include the Vidgo live TV streaming service for this stat due to its low profile.

Sling TV’s place on the market, combined with its successful marketing campaigns, helped it dominate in the OTT space for most of the past five years. However, increased competition is now eating away at its market share. This is evidenced both by Sling TV’s slowing subscriber growth rate, as well as the negative search interest it’s experiencing on search engines.

The real breaking point for Sling TV appears to have been late October/early November 2017, or around six months after YouTube TV officially entered the market. Google soft-launched its YouTube TV service in only a handful of major cities but rapidly expanded the service area by the end of 2017. YouTube TV’s search interest finally reached a sustained dominance over Sling TV in January 2019, the same month Google officially announced that its YouTube TV service was available everywhere in the US.

To be fair to Sling TV, the platform is far from struggling. It’s still the second-most searched for OTT service on the US market when compared to the other four popular OTT services (YouTube TV, Hulu with Live TV, Philo, and FuboTV). 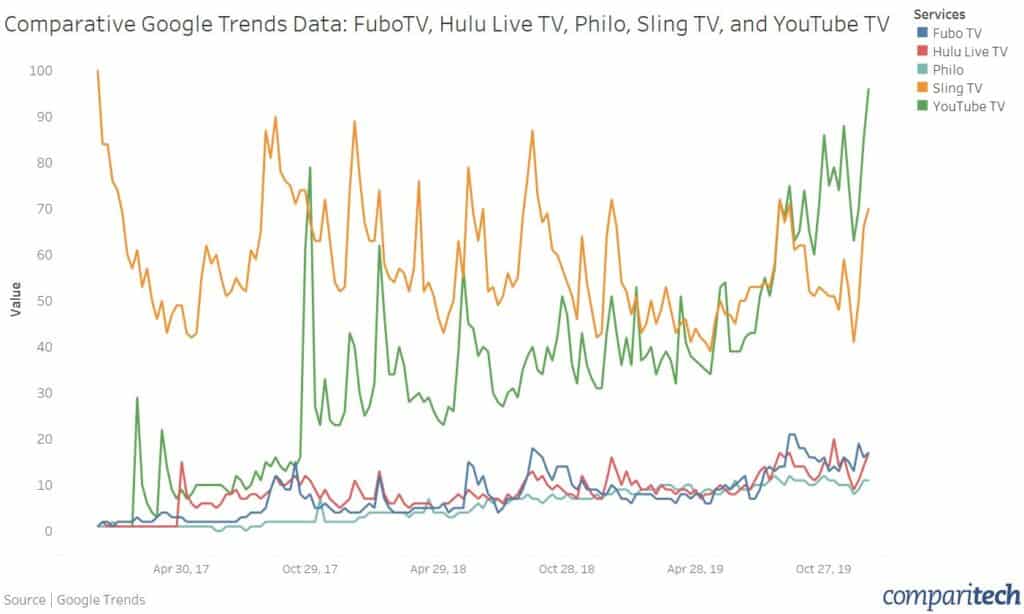 While YouTube TV and Sling TV battle it out for first place in the market, Philo, FuboTV and Hulu with Live TV are all struggling for third place.

Nevertheless, the most important data to go on here are not Trends search interest numbers, but subscriber counts. On that end, Hulu with Live TV is the clear winner with over 3 million subscribers as of 2020.

8. The on-demand streaming market is getting fierce—and overcrowded

Netflix is currently the biggest over-the-top (OTA) on-demand streamer available for cord-cutters. The company was the first to successfully deliver a real on-demand streaming experience to subscribers, giving it an edge over the growing number of competitors. By the end of 2019, Netflix had over 167 million subscribers worldwide.

Now, there are hundreds of on-demand streaming services crowding the market, all competing for a limited number of subscribers. One study found 70 percent of consumers think there are too many choices on the market right now, which is not good news for new entrants.

The most notable new players include:

Outside of this, cord cutting allows users to choose between over 100 different niche on-demand services. This market saturation has created what some observers are calling a streaming service bubble.  When that bubble will burst, however, is difficult to predict.

Currently, most Americans only pay for three streaming services. Providers need to either convince Americans to pay for more services, persuade them to drop a pre-existing service, or develop tricky plans to get TV fans to add more without thinking about it (such as by bundling services with wireless phone plans).

See also:
How to watch Disney+ with a VPN

Companies like Netflix, Hulu, and HBO are in an arms race of sorts over original content. One analysis found that cord cutters are driven primarily by original content when they choose to subscribe to streaming services.

This was confirmed by a 2019 Deloitte survey, which found that 57 percent of US streaming service subscribers are driven by original content. On a more granular level, 71 percent of millennials stated that original content was their primary motivating factor.

The number of on-demand services in the market is helping to drive up original content spending budgets. Consumers are hungry for unique and original stories, and providers are trying to win subscribers by providing high-quality content consumers can’t find anywhere else.

As providers deliver bigger budgets to their original content writers, cord-cutters are certainly benefiting even as they hit their breaking point for how many services they want to pay for.

Unsurprisingly, password sharing is increasing as a result. Major services like Netflix and others are now considering cracking down on the practice. One study even puts the cost of password sharing on the streaming industry at $9.1 billion in lost potential revenue.

Nobody is going to question the dominance Netflix maintains in the cord-cutting market. Still, Netflix continues to confuse the masses into thinking its original content is actually “originally produced” by Netflix.

Among its top-rated shows (those scoring a combined average of 80/100 or more on Rotten Tomatoes and IMDb), 25 percent were licensed movies or TV shows. Netflix has a policy that allows it to slap the “original” title onto content that it has exclusive international rights to stream.

That said, original content that the company has developed in-house (or “true” original content) is doing quite well. An impressive 75 percent of its top-rated content is completely original to the service. 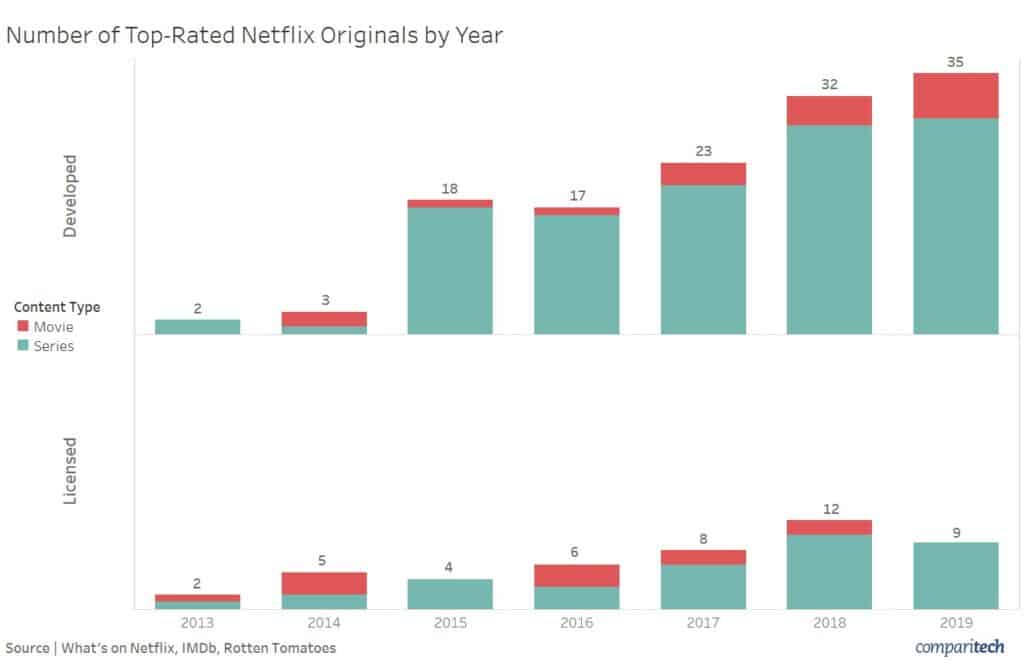 Netflix is also producing top-rated original content at a mad clip, helping fuel the ongoing streaming wars. Over half of its top-rated developed content was produced in 2019 and 2018 alone.

See also: How to find a VPN for Netflix

Cord cutting predictions for 2020 and beyond

There are some interesting trends to watch going forward. Here are five key predictions on the future of cord cutting statistics:

“Cutting the Cord – Cord Cutting from Cable TV to Streaming TV Services” by mikemacmarketing is licensed under CC BY 2.0