How to Watch Big Brother 2022 Online Live Feeds (outside US)

Looking to stream Big Brother season 24 from outside the US? We’ll explain how to watch the 2022 season of Big Brother live online, from anywhere, with a Virtual Private Network (VPN).
Ian Garland Streaming, Kodi and VPN Expert 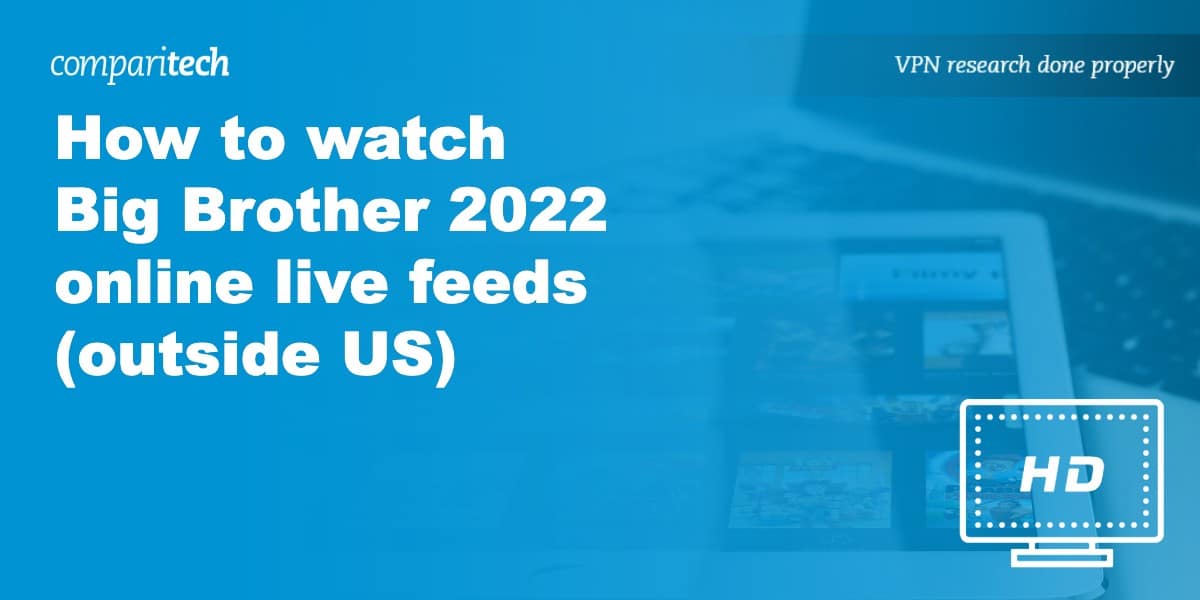 Big Brother 2022 is scheduled to begin on July 6 at 8 PM EST (5 PM PST). The series will kick off with a special live moving-in episode, followed by a new episode each Wednesday, Thursday, and Sunday. There’s certainly plenty to look forward to, and below, we’ll let you know how to live stream Big Brother 2022 from anywhere in the world.

Unfortunately, Big Brother 2022 will only be shown on region-locked platforms. As such, you’ll need a VPN to watch it from abroad.

How to stream Big Brother season 24 abroad with a VPN

With the right VPN, it’s easy to access region-locked sites and services abroad. Follow the steps below to unblock and stream Big Brother live from outside America.

Here’s how to watch Big Brother 2022 online from anywhere:

Big Brother 2022 will air live, so we recommend running through the steps above well before the first episode is due to begin. This way, you’ll know of any problems in advance and will have time to get help from your VPN’s customer support team, instead of missing the start of the season.

NordVPN is offering a fully-featured risk-free 30-day trial if you sign up at this page. You can use the VPN rated #1 for Big Brother with no restrictions for a month—great if you want to stream the latest episodes as you travel.

The new season of Big Brother will air on CBS. If CBS is included in your cable TV subscription, you can sign in and start streaming immediately at no added cost. Don’t have cable? Don’t worry: you can also log in with several different over-the-top services.

Currently, Hulu with Live TV, YouTube TV, and fuboTV all let you watch CBS live online. You could also sign up for Paramount+: this platform costs $9.99 USD per month, and it not only lets you watch Big Brother 2022 but also grants you access to exclusive live feeds. These platforms all offer a free trial (usually one week), so you can use each of them to watch a few episodes for free.

All of the streaming platforms above are region-locked. This means that you’ll have to connect to a US VPN server to use them abroad. NordVPN offers a 30-day money-back guarantee, allowing you to stream Big Brother risk-free; if you’re unimpressed, just cancel within 30 days for a full refund.

Can I watch Big Brother online in other countries?

Below, we’ll let you know which networks are showing Big Brother in your country:

Global will be showing new episodes of Big Brother 24 at the same time that they air in the US. Better still, this service is entirely free to use, and also allows you to watch old seasons of Big Brother Canada (or BBCAN, as it’s affectionately known). You don’t even have to sign up!

Unfortunately, there aren’t any British networks showing Big Brother in the UK. In fact, even the British version is unavailable, having been unceremoniously canceled back in 2018. This also applies to Celebrity Big Brother, which was due to begin its 23rd season. To make matters worse, there’s currently no official way to stream older seasons online.

When did Big Brother start and who was the first winner?

The US version of Big Brother first aired in July of the year 2000 and went on for 88 days. Ten housemates participated. Eddie McGee was crowned the winner, with Josh Souza as the runner-up – following a popular vote by American viewers. The show was presented by Julie Chen and Ian O’Malley. McGee was awarded $500,000 for winning.

When will Celebrity Big Brother be shown on TV in 2022?

Celebrity Big Brother season 3 was announced by CBS last year and will be broadcast from February 2 until February 23, 2022. The show will run for 15 episodes and will air at 8 PM ET. It is expected to run as counterprogramming to the Winter Olympics. Fans of the show will be excited for its return after a two year hiatus.

Big Brother has a fairly simple format: a group of people enter the house and are not allowed to communicate with the outside world. They’ll undertake a series of challenges, with the most successful HouseGuest becoming the “Head of Household” for that week. This contestant then receives preferential treatment but has to elect two other participants for eviction.

The other HouseGuests (barring those who were nominated) vote on who should be eliminated, and the person with the most votes goes home. There’s a rule-change every season, though; this season’s twist is that three houseguests will compete in a wildcard competition, with the winner becoming immune from being voted out. However, in accepting this prize, something will happen to them, their team, or potentially even the entire house.

Who are the Houseguests for Big Brother 24?

Currently, the houseguests identities are a CBS closely guarded secret, for now. We will update you when we know more.

Julie Chen Moonves will host Big Brother season 24. She has been the long-standing host of the show and is very popular with fans. Will she be back for next year?