How to watch Supernatural Season 15 online free from anywhere

Want to watch Supernatural season 15 online for free? We’ll let you know when new episodes will air and how to live stream the final season of Supernatural from abroad, using a Virtual Private Network (VPN).
Ian Garland Streaming, Kodi and VPN Expert 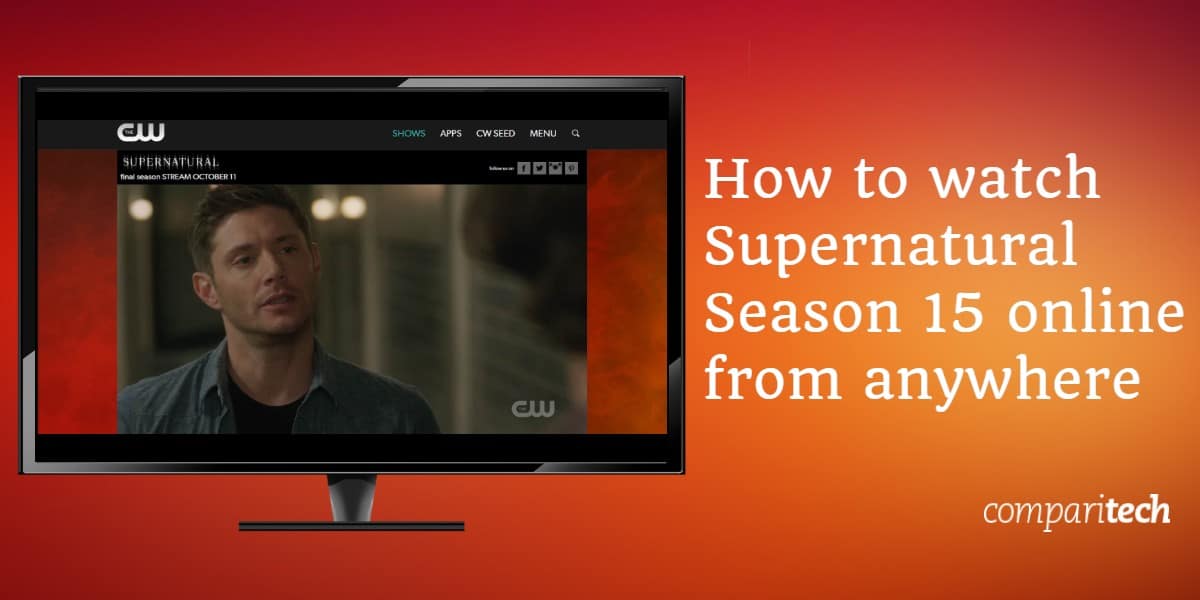 Supernatural season 15 will premiere at 8 PM EST (5 PM PST / 1 AM BST) on October 10. There’ll be a new episode every Thursday, although this series will be slightly shorter than previous ones, with just 20 episodes. Assuming an uninterrupted release schedule, this means the show should end in March next year. Read on to find out how you can live stream Supernatural online from abroad (outside of the US).

You should note that we’ll only be recommending official sources for Supernatural. Given how popular this show is, it’s likely unlicensed streams will be available. These are often low-quality, though, with low-resolution, laggy video, so we don’t recommend using them. Additionally, third-party streams can be taken offline at any moment for copyright violation. You can watch Supernatural season 15 online for free anyway, though, so there’s no need to use unauthorized streams.

Supernatural will only air on geo-restricted streaming services. This means you’ll need a VPN to watch from abroad.

How to watch Supernatural season 15 online abroad for free

Most streaming platforms check the user’s IP address to see if they’re in a supported country or not. When you connect to a VPN, you’re given a new, region-specific IP address that allows you to trick services into thinking you’re located somewhere different. This sounds complicated but it’s actually quite simple; just follow the steps below:

Here’s how to watch Supernatural Season 15 online free from anywhere:

How to stream Supernatural for free on US TV

The CW is the only network showing Supernatural season 15 in the US. Although this service doesn’t have its own live stream, it does allow you to watch new episodes on-demand shortly after they finish airing. Better still, The CW is completely free to use, and you don’t even have to create an account.

If you’d rather live stream Supernatural, you can. AT&T TV Now, fuboTV, Hulu with Live TV, and YouTube TV all allow you to watch The CW live online. While all of these services offer a free trial, they’re fairly expensive afterward, averaging around $45 USD per month. Considering the whole season will be freely available, though, most people would be better off just watching on-demand.

Looking to catch up on older episodes before season 15 begins? You can find all fourteen seasons on Netflix US. This service includes a free one-month trial, so you can just sign up, watch as much as you like, and cancel to avoid being charged.

All of the above services are region-locked, meaning you’ll have to be in the US or connected to an American VPN server to access them. Still, haven’t chosen a VPN? No problem: ExpressVPN comes with a 30-day money-back guarantee, allowing you to watch Supernatural abroad, completely risk-free. If you’re unsatisfied, just cancel within this time to receive a full refund.

Where else can I watch Supernatural season 15 online?

Only the US and Canada have confirmed broadcasters for Supernatural season 15. This means that fans in the UK, Australia, and the rest of the world might be in for a substantial wait, unless you use a VPN to access an American or Canadian streaming service.

Supernatural season 15 will air at the same time in Canada as it does in the US, only on CTV instead of The CW. If you have a Canadian cable TV subscription, you can log in and start streaming immediately. Otherwise, you’ll have to wait until new episodes are added to the on-demand catalog (usually a few hours after airing).

Until recently, older seasons were available on Netflix Canada but this is no longer the case. If you’d like to stream seasons 1–14 of Supernatural online, you’ll have to purchase them on platforms like Amazon Prime Video or iTunes for around $14.99 CAD each.

CTV is free to use and doesn’t require you to register, although it is region-locked. You can still access it from abroad by connecting to a Canadian VPN server, however.

What can fans expect from the final season of Supernatural?

The plot for Supernatural season 15 is being tightly kept under wraps, but we do know that the premiere will see Chuck bring some of the Winchesters’ friends and foes back from the dead to toy with them.

Previously, one of the show’s stars, Jared Padalecki, said he wanted Sam and Dean to die, Butch and Cassidy-style. This doesn’t seem like it will be the case, though, with Padalecki claiming that it took him a week or so to process the ending. To be fair, after fifteen seasons, the ending was always going to be controversial regardless of what happens. On the plus side, if it leaves you unsatisfied, there’s always the possibility of a Supernatural movie to help set things right.