How to watch The Goldbergs season 7 online free 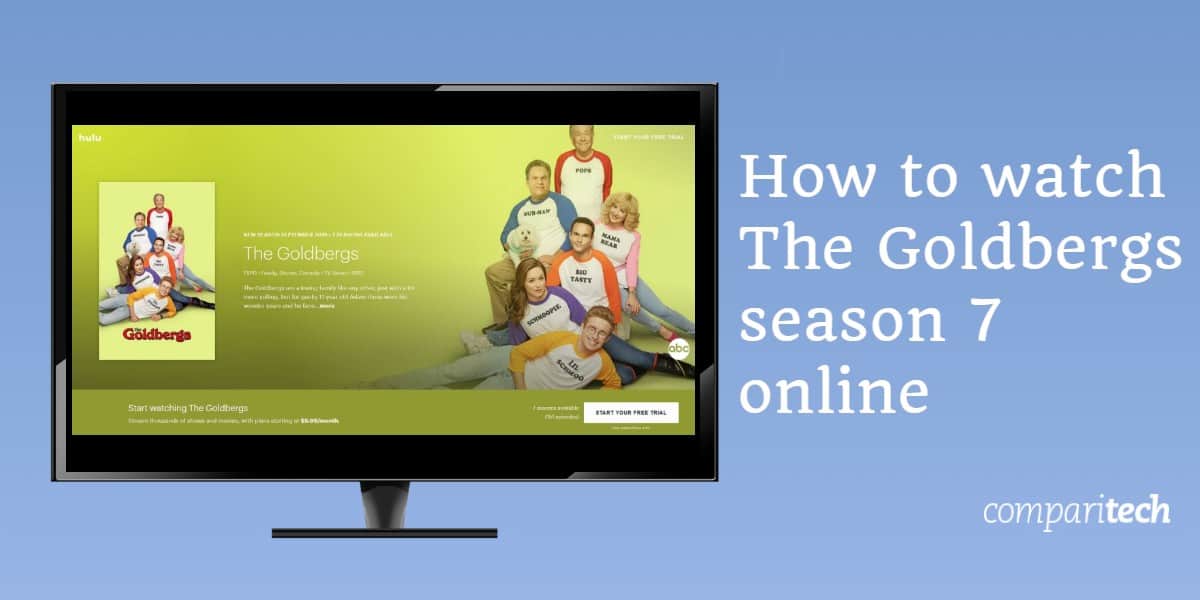 Fans of The Goldbergs will be happy to know season 7 will air in the UK on the 19th of February at 8 pm on E4. While American viewers have had a bit of a head start, only around fourteen of the season’s 24 episodes have aired, so British viewers aren’t too far behind. Read on to find out how to stream The Goldbergs season 7 online free from anywhere in the world.

It’s important to mention that we’re only recommending official sources. This show has a huge following and as such, there are likely to be unofficial streams making the rounds. However, these tend to have very low-quality video, and they’re usually taken down for copyright violation fairly quickly. There’s no need to resort to third-party streams anyway since you can stream the entire seventh season of The Goldbergs for free.

The Goldbergs season 7 will only be broadcast on geo-restricted streaming services. This means that, if you’re traveling abroad you’ll have to use a VPN to watch your usual home services.

Streaming services often determine the user’s location by examining their IP address. A VPN routes your traffic through a secondary server in a country of your choice. Once connected to a VPN, streaming services can only see the IP address of the VPN server you’re using. This lets you hide your true location and access region-locked services from abroad. Below is a quick step-by-step guide to watching The Goldbergs with a VPN.

Here’s how to watch The Goldbergs season 7 online free from anywhere:

The Goldbergs will air live, which is why we recommend taking a few minutes to make sure your VPN works properly ahead of the premiere. This way, if you encounter any issues, you’ll have plenty of time to get help from your VPN’s customer support team, and might not have to miss part of the first episode.

Although we don’t have an exact premiere date, we do know that season 7 of The Goldbergs will air on E4. You can stream this channel online, completely free of charge, via All 4. Note that you will have to create an account before you can watch anything. During registration, you’ll be asked for your postal code; there’s no verification in place, so any valid UK postal code will work.

British legislation says that you need a TV license to watch anything online at the same time that it’s being shown on TV. Despite this, All 4 doesn’t actually make sure you have a license; it simply has users click a button saying whether they do or not. You should also note that you do not require a TV license if you only intend to watch The Goldbergs season 7 on-demand.

All 4 is region-locked and usually only accessible from within the UK. However, if you’re abroad on vacation, you can connect to a British VPN server and access All 4 as normal. Don’t have a VPN yet? ExpressVPN comes with a 30-day money-back guarantee, meaning you can use it to stream The Goldbergs risk-free. If you’re not impressed, just cancel to receive a full refund.

Where else can I watch The Goldbergs online?

The Goldbergs is being broadcast in several countries, not just the UK. Below, we’ll explain how to can watch season 7 where you are:

A new episode of The Goldbergs airs every week on ABC. These are made available to watch for free shortly after airing, and they stay on the service for around a month before expiring. If you’d like to stream season seven live, though, you’ll have to sign in with your cable provider details.

ABC also lets you log in with a Hulu or YouTube TV account, so if you’d prefer to stream The Goldbergs without cable, you can. While both of these services come with a free trial, we recommend Hulu: not only is it less expensive at just $5.99 USD per month, its on-demand library currently includes every previous episode.

All of the services above are geo-restricted, which means you can’t usually access them from outside of the US. Americans in other countries can use them as normal by connecting to a US VPN server.

You can stream new episodes of The Goldbergs live every week at 7:30 PM EST (4:30 PM PST) on CTV. As these are available on-demand for several weeks, there’s no need to worry about missing an episode; you can always catch up later. However, CTV doesn’t let you log in using any over-the-top services, which means you will need a Canadian TV subscription to watch anything.

CTV is region-locked, so you’ll need a VPN to use it from outside of Canada.

What can we expect from season 7 of The Goldbergs?

All of the main cast members are returning, so fans should find plenty of familiar faces in season 7. As ever, there’ll be a wide range of guest appearances, with Leslie Grossman, Steve Guttenberg, and Judd Hirsch all appearing early on in the season.

The seventh series of The Goldbergs will be mostly comprised of self-contained stories, just like previous seasons. However, the theme so far seems to be “cinema,” with several episodes paying homage to classic movies like National Lampoon’s Vacation, Animal House, and The Rocky Horror Picture Show.