Kaspersky vs TotalAV: Which wins?

Kaspersky vs TotalAV - it's a battle between two antivirus programs to find out which performs better in protecting against malware.
Steve Adams 15+ years experience in the tech, privacy and security space 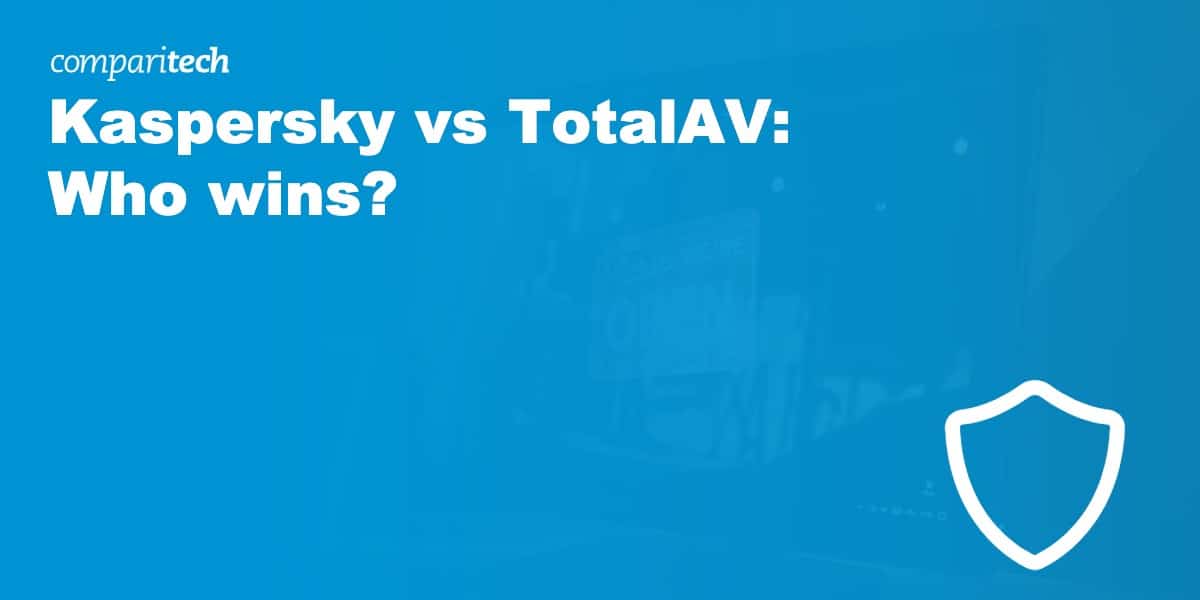 With the abundance of antivirus software available, choosing the one that provides the strongest protection is difficult. In this post, I’ll compare two leading providers – Kaspersky and TotalAV.

I’ll be looking closely at what each program offers, comparing pricing, features, malware protection, performance, and more. I have included data from my own malware and performance tests, as well as results from third-party studies.

Don’t have time to read the full article?

In case you don’t have time to read the full article, my winner is Kaspersky. It has a wide range of features and is simple to use. Most importantly, it’s excellent at protecting your device against threats with its powerful scanning function.

Want to know more? Read the article for a full comparison.

BEST DEAL FOR KASPERSKY:Get up to 70% off all Kaspersky products and get a secure VPN and password manager included.

BEST DEAL FOR TOTALAV:Save $80 on a TotalAV subscription and protect up to 6 devices at the same time.

Kaspersky Lab was founded in Russia in 1997. It has more than 400 million users around the world, gaining industry prestige by working with companies like Microsoft. Its products have been developed to protect against threats to cybersecurity for both businesses and households.

TotalAV is owned by Protected.net Group Limited, a registered company in the United Kingdom. While TotalAV is seen as a relatively new piece of software in the antivirus world, it remains an award-winning product, receiving a perfect score from the Virus Bulletin. With over 25 million users worldwide, TotalAV regularly conducts software tests ensuring that it provides reliable protection.

There are multiple free antivirus products on the market and they can be tempting. If you want to reliably protect your devices, you’re better off going with a paid product. Free antivirus software can offer a basic level of protection, but it often falls short in some areas, for example, preventing your personal data from being stolen.

That said, the cost is important, as paid plans can represent a significant investment. In the tables below I have outlined the prices and packages of Kaspersky and TotalAV.

Kaspersky offers three different paid plans, with its entry-level program providing protection only for Windows computers. This plan includes the antivirus engine and tools necessary to protect you from malware involved in cryptocurrency mining. It costs $39.99 per year, but has been discounted to $11.99 for the first year and can be used on up to three devices.

The midrange plan from Kaspersky offers extra protection for your personal and financial data. It costs $23.99 per year but the price is discounted to $17.99 for the first year. Unlike the basic tier, this plan is compatible with Windows, Mac, and mobile operating systems.

The top tier is Kaspersky Total Security, which costs $89.99 per year, but is discounted to $26.99 for the first year. This plan includes parental controls and can be used on up to three devices.

Like Kaspersky, TotalAV offers a tiered pricing structure, but it also includes a free version. For the paid versions, you can opt to protect three, five, or six devices. The prices range from $119.99 per year to $170 per year. The paid plans are comparatively more expensive than those offered by Kaspersky. There are other features that come with the paid packages, such as VPN – Safe Browsing included in the $119.99 tier, and Ad Blocker and Secure Password Vault for the highest $170 tier. TotalAV is compatible across Windows, Android, and Mac platforms.

Both products offer a 30-day money-back guarantee, which gives you the reassurance of being able to get a refund if you’re not completely happy with the product.

While Kaspersky is cheaper than TotalAV, what you get for your money is just as important as how much it costs. Read on to find out more about what each service has to offer.

Malware (or malicious software) can be used in cyberattacks and cause damage to your computer. In this section, I have recorded how TotalAV and Kaspersky perform on a variety of malware tests.

I downloaded four different malware test files from the European Institute for Computer Antivirus Research (EICAR). These results can be seen in the table below.

As shown, Kaspersky managed to detect and block all EICAR samples, whereas TotalAV only blocked one EICAR sample, allowing the other three. I also tested both software on live trojan and adware samples. Kaspersky performed slightly better than TotalAV on this test, as it managed to block one live sample, leaving the other two detected but not removed. However, TotalAV only managed to detect all three of the live samples, deleting none of them.

I wanted to further validate my findings, so I looked at how both products performed on independent testing websites. For my findings, I checked AV-Test and AV-Comparatives. AV-Comparatives uses two different methods to determine the efficacy of antivirus software: Malware Protection and Real-World Protection tests.

These tests check how antivirus software performs when faced with different types of attacks and threats. The Malware Protection test deals with threats on the device locally, such as those introduced from an external hard drive, whereas the Real-World Protection tests look at threats downloaded from the internet.

On the most recent Real-World Protection test, Kaspersky scored a 99.9 percent protection rating, which means that it blocked all but one of over 700 sample threats. TotalAV also performed reasonably well in the most recent report, with a protection score of 98.5 percent.

With the March 2020 Malware Protection test, Kaspersky was in the top tier due to its performance when dealing with active malware threats. Kaspersky recorded a malware protection rating of 99.97 percent, with only three out of 10,249 infection simulations causing an infection. However, TotalAV scored an amazing 99.99 percent on the same simulation.

During the test period of March 2020, AV-Comparatives also highlighted whether products had false alarms. False-alarm tests show how accurately a file is marked as safe or a threat. TotalAV gave 25 false positives, whereas Kaspersky only gave 10. Lower is better.

While TotalAV didn’t disappoint, Kaspersky performs extremely well when it comes to protecting against malware and is the winner in this round.

When you install certain software on your PC, you can expect to see some impact on performance, and this applies to antivirus software. In this section, I will determine which antivirus software caused the least impact. I started by assessing how Kaspersky and TotalAV performed during a full system scan.

Kaspersky’s full scan lasted longer than TotalAV’s, taking almost four hours. However, while there was only just under half an hour difference between the two scans, Kaspersky performed a far deeper scan. TotalAV scanned a total of 120,000 files, whereas Kaspersky scanned over two million discrete items.

While there was no scan running, TotalAV used almost double the CPU usage when compared to Kaspersky, with both Kaspersky and TotalAV jumping up to 100 percent CPU usage while carrying out the full scan.

I also recorded CPU usage when conducting a quick scan.

When Kaspersky was carrying out a quick scan, there was an increase of 25 percent in CPU usage as compared to when no scan was running. This represents a fairly significant toll.

There was a notable increase in memory usage of around 50 percent for TotalAV when the software carried out a quick scan. It’s also worth noting that this scan took 1,740 seconds, which is much longer than other leading antivirus software products.

Although malware protection and performance are important, it’s a good idea to consider what else you’re getting from your antivirus package. Here are a few of the standout features offered by Kaspersky and TotalAV.

Here’s a closer look at some of those features:

Both products offer a range of top-level protections for looking after your devices when you go online. Furthermore, the parental control feature that Kaspersky offers is especially handy for protecting children who go online.

One aspect of antivirus software that people fail to consider is how easy the product is to install. Kaspersky and TotalAV have signup and installation processes that are easy to navigate for both beginners and advanced users.

When you’ve selected the product you want, TotalAV takes you straight to the checkout and shows you how much you are saving. It also states whether you have ‘free tune up’ and ‘free additional devices’ added on to your plan, as well as how much these would normally cost.

The Kaspersky website has a simple installation page, only taking three clicks to access. There is a four-step path when you select and purchase the product, with the download and installation only lasting a couple of minutes.

Both Kaspersky and TotalAV offer free trials before purchasing the product so you can make sure you’ve made the right choice.

TotalAV is more appealing to those with less experience using antivirus systems. When you open the program, it tells you straight away whether you’re protected or not, and provides the option to run a smart scan. The icons on the left-hand sidebar enable you to navigate around the program, including adjusting your settings and checking malware protection. 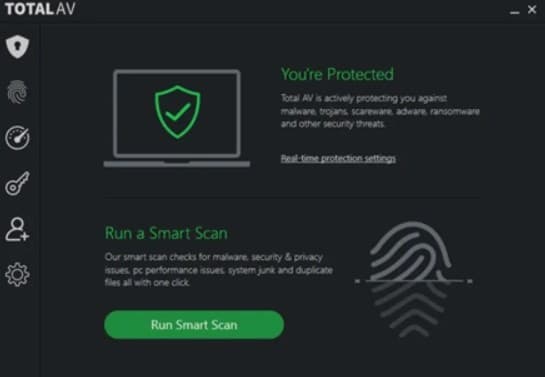 The app layout for Kaspersky is really easy to follow, with the interface divided into separate sections. Turquoise buttons stand out against the light gray background, with the interactive panels in white. There are sections for the most prominent tools, with other features accessed by the dropdown menu. A counter in the bottom right of the screen tells you how many days you have left before you need to purchase a new license.

If you want antivirus software you can rely on, it’s important that it provides a solid customer support network.

Accessing Kaspersky’s customer support section is as simple as clicking a banner, which takes you to a page with a range of options for home and business users. There are a variety of forums and general FAQs, as well as a large knowledge base for Kaspersky users. There’s also 24/7 support for all users, via live chat, phone, or contact form.

Like Kaspersky, TotalAV has 24/7 live chat support available on its website. This function is quick and easy to use and is often the preferred support method for its users. You can also reach TotalAV support via email or phone or simply turn to the extensive FAQs and support documentation available on the website.

At Comparitech, we want to make choosing an antivirus as easy as possible for consumers. We have created a precise antivirus testing methodology. Our method uses in-house testing to check how easy to set up and use the AV is. We also check the company’s reputation, jurisdiction, and its attitude towards consumer data. Our tests also identify important AV benchmarks, including:

Our internal processes are not designed to bear laboratory-level results. Instead, they help to identify the likelihood that an antivirus will be able to cope with real-world threats on popular consumer devices.

We bolster our in-house testing with reliable, up-to-date test result data from four of the world’s leading AV testing labs:

We analyze the results from these laboratories to verify our findings and to provide the most recent and unbiased account of how antivirus products work and compare to one another.

To conclude, Kaspersky is my winner when compared with TotalAV. Kaspersky is top-tier when it comes to its scanning ability and protecting your computer against malware. The only downside is that Kaspersky only offers paid plans, but with the 30-day trial and range of features, this can be overlooked.