Does Hola work with Netflix?

If you’re looking to access your home country’s Netflix library while traveling abroad, you’ll need a VPN. Take a look below to find out if Hola works with Netflix.
Ian Garland Streaming, Kodi and VPN Expert 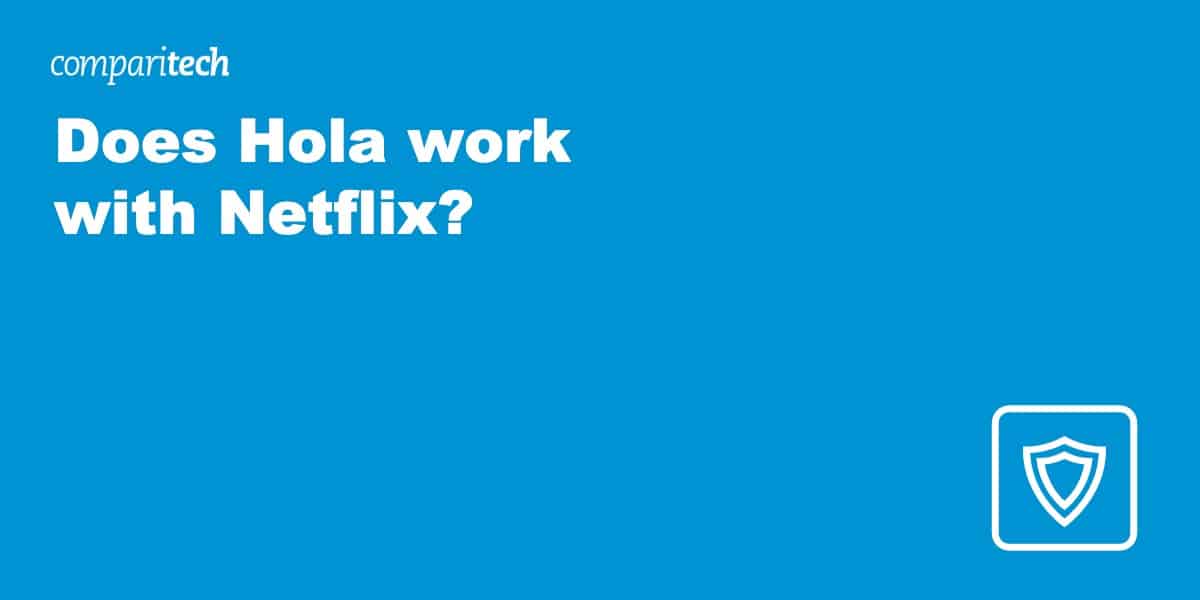 Netflix is available almost anywhere in the world, but did you know that each country has its own content library? For instance, Netflix Japan has more anime, while Netflix Spain offers more Spanish-language content. Unfortunately, the downside of this is that you may not be able to continue streaming your favorite shows if you go abroad on vacation.

Because this service looks at the user’s IP address to find their location, it’s easier than you might think to access your home Netflix library from abroad. In short, all you have to do is make your IP address point to a different country. The quickest and easiest way to do this is with a VPN. Below, we’ll explain whether Hola can access Netflix, and whether this service is worth using.

Will Hola work with Netflix?

During our testing, we found that Hola did not work with any of the Netflix shows or catalogs our team tried to access. In common with most free VPNs, Netflix detects Hola and returns an error message.

We found the best VPN for accessing the widest range of Netflix content to be ExpressVPN.

An important note on Hola and your data

Hola is an extremely popular service, largely due to the fact that it’s free and relatively fast. Scratch beneath the surface though, and there’s plenty to be concerned about.

First of all, it’s more of a P2P proxy than a VPN; rather than having encrypted servers around the world, Hola essentially just allows its users to swap IP addresses with one another, routing your browser traffic through someone else’s PC and vice-versa. The problem with this, of course, is that somebody else could be using your IP address to commit crimes on the internet and you’d have no way of conclusively proving that it wasn’t you. Also, it has allowed third parties to pay money in exchange for users’ bandwidth, effectively making their users part of a botnet.

Then there’s the sheer amount of information that Hola collects. Most VPNs stress that they don’t keep any personally identifiable data but Hola goes in the complete opposite direction. Its privacy policy states that it may keep logs of your activities, connection timestamps, name, payment details, any other apps you have installed, and any information gleaned from social media (home address, date of birth, and so on). This is an unacceptable amount of information, most of which is simply none of Hola’s business. Privacy-conscious users should stick to a reputable no-logs VPN.

How to change your Netflix country using a VPN

Once you find a VPN that works, watching your home Netflix library is relatively straightforward. Just follow these five steps.

Here’s how to watch Netflix from anywhere with a VPN:

Which Netflix libraries does Hola work with?

We advise you not to be tempted by Hola’s marketing: as well as having some serious privacy concerns, Hola does not work with Netflix. In fact, we found it didn’t even work with smaller streaming services like ITV Hub or ABC, and unless you decide to pay, you’re limited to an hour of streaming per day.

Here’s a far better idea: use a reputable service like ExpressVPN. Not only does this provider encrypt your data, keeping you safe from snoopers, but it also refuses to log any data that could be traced back to you. It works with around a dozen Netflix libraries, including Netflix US, UK, Canada, India, and Japan.

Why are free VPNs bad for streaming?

You’ll often see free VPNs talking up their speeds or streaming potential but the reality is that they’re actually far less useful than they make out. To begin with, these services tend to have very small networks, which leads to extremely slow speeds and videos that buffer endlessly. Further, since there’s so much traffic from a relatively small number of IP addresses, it’s very easy for streaming platforms like Netflix to blacklist these kinds of services.

You should also consider the security implications of using a free VPN. After all, there are plenty of services out there that only pretend to encrypt your traffic, and many more that are actually malware in disguise. There’s also no telling who has access to your data with these services, a fact that comes with its own litany of problems. For these reasons, we strongly recommend using a reputable, zero-logs VPN when streaming.

Why aren’t some Netflix titles showing up?

Netflix doesn’t actually let you know outright anymore if it has detected you’re using a VPN. Instead, it just changes the available content so you’re only able to watch shows that are available globally. This can also manifest as a glitch where certain categories or rows fail to load.

You’re not completely out of luck if this happens, though. Start by clearing your cookies and refreshing the page. This will delete any old location data and force Netflix to try to locate you again. If this doesn’t work, contact your VPN’s help desk and see if any servers have been specifically optimized to work with Netflix. Assuming none have, it may be time to look for an alternative provider.

How fast does my internet need to be for Netflix?

You don’t actually need blazing fast speeds to stream HD content on Netflix, although when it comes to 4K video, the faster your connection, the better. You’ll also have to take your VPN into account, since these usually reduce your speeds by about one-third (although there is a ton of variation here). This means that, according to Netflix’s speed recommendations, you’ll need at least an 8Mbps connection before the VPN is connected to stream smoothly.