Are VPNs legal in Saudi Arabia? A common sense guide

We'll discuss how to use a VPN in Saudi Arabia and the current legalities of using a VPN in the KSA. Plus we'll even give your our list of the best VPNs for Saudi Arabia.
Paul Bischoff TECH WRITER, PRIVACY ADVOCATE AND VPN EXPERT 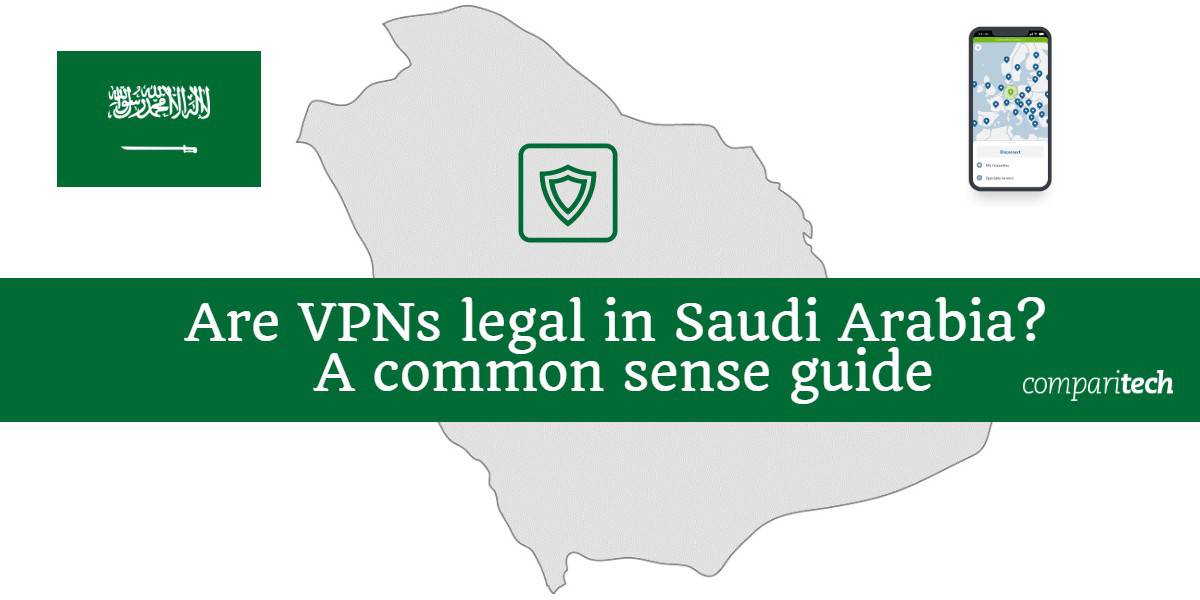 People in Saudi Arabia use VPNs to access content not available in their own country. That includes content censored by government authorities as well as region-locked content from other countries, such as Netflix and BBC iPlayer. Global Web Index estimates 29% of people in Saudi Arabia accessed the internet through a VPN sometime in the past month (PDF).

VPNs are also used by businesses and individuals in the country to safeguard data in transit and prevent snooping by internet service providers, spies, and hackers.

We’ll go into more detail about the legality of VPNs in Saudi Arabia, but if you’re just looking for one that works, below are the five best VPNs for Saudi Arabia.

We chose these VPNs based on the following criteria

We have a more information on these VPNs later in this article and an even more detailed breakdown of the best VPNs for Saudi Arabia here in a dedicated article.

Please note that this article is not professional legal advice.

Are VPNs legal in Saudi Arabia?

Although the government of Saudi Arabia blocks access to many VPN providers’ websites and servers, using a VPN is not illegal in the country. We recommend signing up for and downloading the VPN you want to use prior to traveling to Saudi Arabia as some VPN websites are blocked even though the VPN app will work.

Many people in Saudi Arabia, both citizens and visitors, use VPNs every day to access censored or region-locked content. There is no precedent of anyone being charged with a crime simply for using a VPN.

Still, it’s important to choose a VPN that works in the KSA. Authorities have blacklisted many VPN providers’ servers, preventing users from connecting. You’ll need a VPN that can stay one step ahead.

Obviously, engaging in illegal activity while connected to the VPN is still illegal. Although a VPN can protect your privacy, we do not encourage using them to carry out illicit activity online. A VPN is not a get-out-of-jail-free card. Legislation changes and you should always do your own research.

If you’ve decide you want to use a VPN in Saudia Arabia here’s a more detailed rundown of our preferred services.

We found these to be the five best VPNs for the KSA:

Our top recommendation, ExpressVPN is an ideal VPN for users in Saudi Arabia. It keeps no identifying logs and employs best-in-class security. That includes unbreakable encryption, data leak protection, and a kill switch that stops all internet traffic if the connection to the VPN server drops. It’s possible to pay with cryptocurrency without revealing any personal information to the company.

Live chat support is ready to help 24 hours per day, every day. You can connect up to five devices at once. Apps are available for Windows, MacOS, iOS, Android, Linux, Amazon Fire TV, and certain wifi routers.

BEST VPN FOR SAUDI ARABIA:ExpressVPN is our top choice. It comes well-equipped for bypassing censorship, protecting privacy, and unblocking sites from the KSA. It comes with a 30-day, risk-free, money-back guarantee.

Hotspot Shield clutches our number two spot thanks to its ease of use combined with speed and security. The simple interface is novice-friendly and doesn’t leave much room for error. HSS keeps no identifying logs save for your IP address, which is deleted when you end your session. 256-bit AES encryption is combined with perfect forward secrecy to ensure third parties cannot snoop on your connection.

Netflix, Hulu, BBC iPlayer, Amazon Prime Video, and more can be unblocked with Hotspot Shield. Speeds are fast enough to let you stream HD video from abroad. Torrenting is permitted and a kill switch will halt your internet connection if the VPN drops for any reason.

Apps are available for Windows, MacOS, iOS, and Android. You can connect up to five devices at once. Servers are spread across more than 70 countries.

BEST BUDGET VPN:Hotspot Shield packs speed and security into an easy-to-use app. It comes with a 45-day money-back guarantee.

NordVPN is a solid all-rounder that doesn’t skimp on privacy and security. The company keeps zero logs about its users and their online activity. It uses industry-best encryption standards backed by good leak protection and a kill switch in case the connection is disrupted.

Speeds are fast enough to stream video in HD. NordVPN unblocks a wealth of streaming sites including Netflix, BeIN Sports, BBC iPlayer, and Sky. Live chat support is available around the clock.

You can connect up to seven devices at once on a single plan. NordVPN makes apps for Windows, MacOS, iOS, Android, Linux, and Amazon Firestick.

STRONG ALL-ROUNDER:NordVPN is a good all-rounder with premium features. It comes with a 30-day money-back guarantee.

Surfshark is a VPN tailor made for streaming region-locked content from abroad and keeping your activity private. It offers strong encryption, an internet kill switch in case of dropped connections, and protection from most data leaks. The company keeps no logs of your activity or other metadata that could identify you.

Surfshark unblocks Netflix, BeIN Sports, Sky, BBC iPlayer, and much more. Speeds are suitable for streaming in HD. Best of all, you can connect an unlimited number of devices at once, which makes this a great option for a family or group of housemates.

Surfshark apps are available for Windows, MacOS, iOS, and Android.

STREAM PRIVATELY:Surfshark is a simple-to-use VPN for unblocking streaming sites from abroad. It comes with a 30-day money-back guarantee.

Although it’s a newer VPN with a smaller server network, PrivateVPN offers all the speed and security of a veteran provider. Military-grade encryption, data leak protection, and an internet kill switch ensure your data is never exposed to third parties. It even comes with a “Stealth mode” that can prevent snoopers from seeing that you’re using a VPN.

PrivateVPN doesn’t disappoint on the streaming front, either. It unblocks Netflix, Hulu, BBC iPlayer, and Sky.

You can connect up to five devices at once. Apps are available for Windows, MacOS, iOS, Android, and Amazon Fire TV.

BYPASS CENSORSHIP:PrivateVPN is a simple VPN that comes with everything you need to access the open web. It includes a 30-day money-back guarantee.

VyprVPN guarantees its users privacy by owning and operating its own servers and data centers. Whereas most other VPNs rent servers from third parties, VyprVPN uses its own infrastructure. The apps use strong encryption and a kill switch to keep your data private. An optional “Chameleon” mode further disguises your VPN traffic as normal web traffic.

VyprVPN can unblock Netflix and a handful of other streaming sites. You can connect up to five devices at once. 24/7 live chat support is ready to assist with any issues. The company doesn’t store traffic or connection logs.

TIER 1 NETWORK:VyprVPN is a solid choice for users in Saudi Arabia. Plans include a 30-day money-back guarantee.

Can I use a free VPN in Saudi Arabia?

We do not recommend using a free VPN for Saudi Arabia. Free VPNs often lack the privacy and security offered by paid providers.

Some don’t employ sufficiently strong encryption while others don’t encrypt anything at all, allowing third parties to monitor your online activity. They might leak sensitive info that could be used to identify you, such as an IP address.

Free VPNs still need to generate revenue, and this often happens through ads. The VPN might inject ads into websites that you visit, collect personal info from your connection to sell to ad networks, or both. Some VPNs have even been caught distributing malware.

Unblocking region-locked content like Netflix, Hulu, Sky, BeIN Sports, and others is much less likely with a free VPN. Their servers are usually blacklisted by these companies, preventing you from watching. They have fewer server locations and often throttle speed and data.

A paid VPN has the necessary resources and support to make sure you can bypass censorship and access the content you want with privacy and security. Free VPNs just don’t get the job done.