We ran over 3,000 tests on 37 VPNs, each against 20 different country versions of Netflix on both desktop browser and the mobile app to see which could securely access Netflix.
Paul Bischoff TECH WRITER, PRIVACY ADVOCATE AND VPN EXPERT 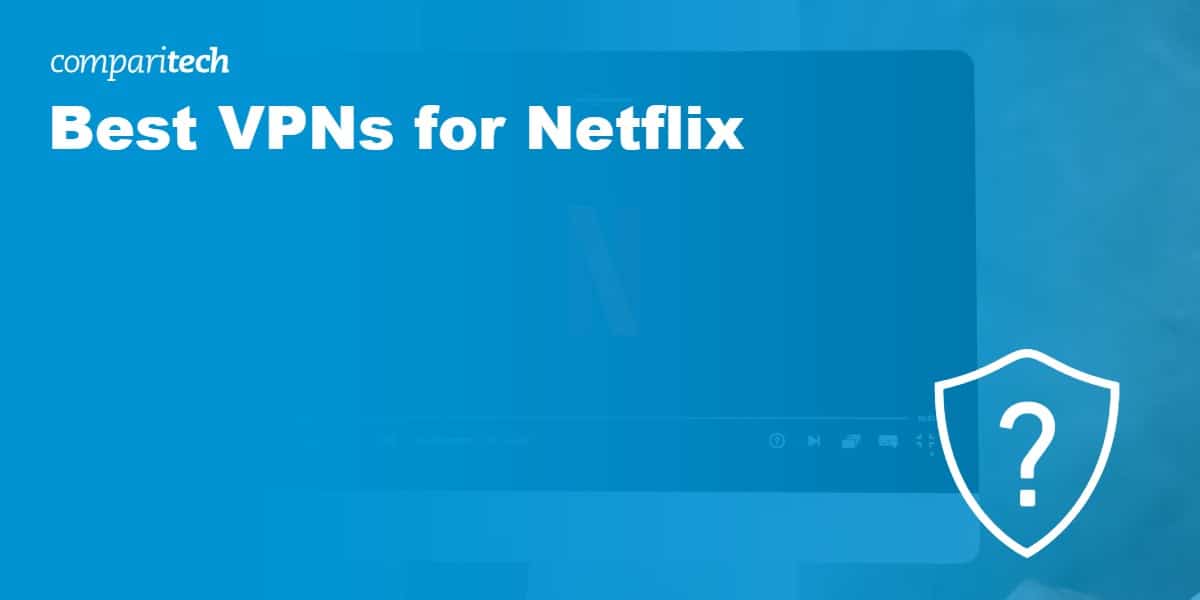 We ran over 3,000 tests on 37 VPNs, each against 20 different country versions of Netflix on both desktop browser and the mobile app to see which could access Netflix.

Netflix has a different library of shows for each country that it operates in. Due to geographic content licensing agreements, TV shows and movies available in one country might not be available in another country. To access other countries’ Netflix libraries while traveling abroad many people use VPNs.

A VPN is a type of proxy that allows you to change your IP address. Netflix determines your location using your IP address, so by changing it, you can access shows and movies from back home while traveling abroad. Based on over 3,000 in-house tests performed in 2021, we’ll show you the best Netflix VPNs and how to use them.

Not every VPN works. Netflix has caught onto the tactic and blacklists many VPN server IP addresses. When that happens, Netflix won’t let you watch and instead gives you a proxy error:

In the past, only a small handful of VPNs worked with Netflix. But according to our latest tests, most VPNs have figured out a workaround. The question now is whether a VPN works with a specific country’s Netflix library of TV shows and movies.

To find out which VPN services can securely access Netflix, our international research team tested 37 VPN services in 20 countries, accessing Netflix both on a desktop web browser and the mobile app. You can see the full results of our research below:

Take these results with a pinch of salt. The battle between Netflix, customers, and VPN providers rages on and viable alternatives are still very much in flux. A server that works today may get blocked tomorrow, while new servers and locations are constantly being added.

International Netflix VPNs: by the numbers

ExpressVPN, ProtonVPN, PrivateVPN, and Hola all worked with Netflix in all 20 countries tested on both a desktop browser and the mobile app, more than any other VPNs. (Warning: for your privacy and security, we strongly recommend against using Hola). They are followed by VPN Unlimited, Tunnelbear, Ivacy, and BulletVPN.

The average VPN works with Netflix in about 15 countries. When we ran a similar study in 2018, VPNs could only access an average of six international libraries. The trend suggests VPNs across the board have invested in Netflix access to meet customer demand, and Netflix hasn’t kept up.

Likewise, the percentage of VPNs that can access the most popular international Netflix libraries went up across the board from 2018 to 2021:

All but four VPNs could access the US version of Netflix, more than any other country. It’s closely followed by Canada, the UK, and Australia. It seems the English-language libraries are the most popular. They also tend to have larger selections of TV shows and movies on average, though that’s not strictly the case. 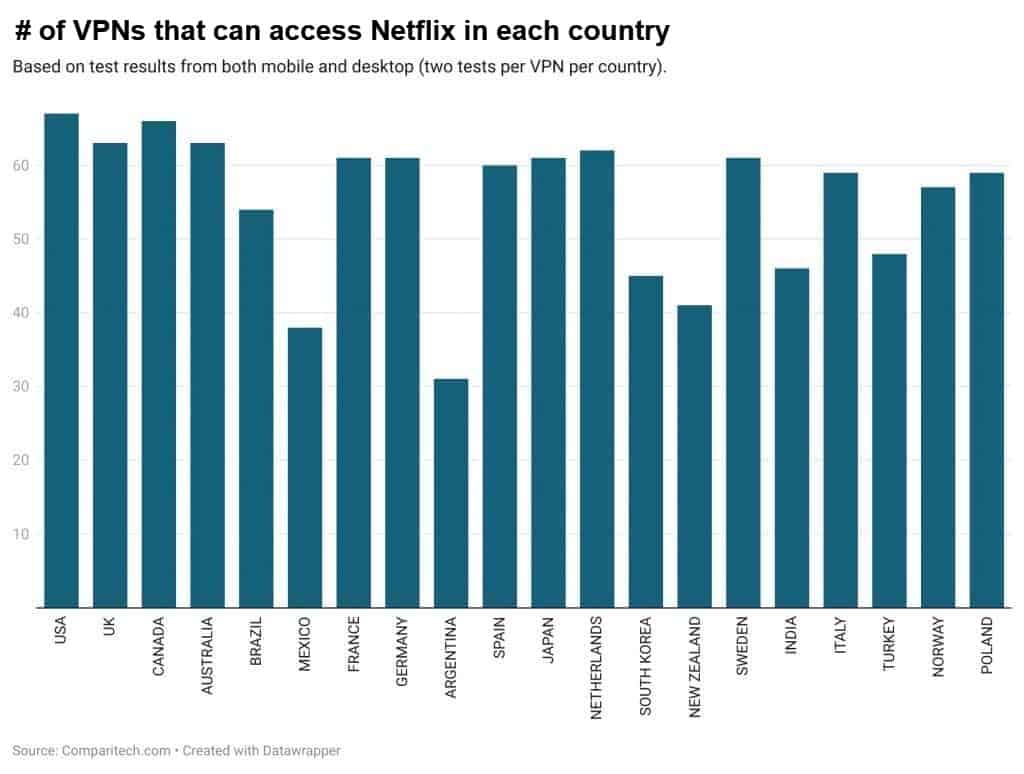 You may have already realized that, depending on where you live in the world, you could be getting shortchanged when it comes to Netflix content. Below you can see which countries have the largest content libraries:

A European Commission report from 2015 estimates cross-border film availability on Netflix within the EU was just 31 percent, though that figure is likely higher in 2021.

The capability for a VPN to access videos on Netflix’s website when viewed in a web browser is slightly more common than on the mobile app. But compared to our previous tests, that gap is shrinking. 555 tests were successful on the desktop website compared to 548 on the Netflix mobile app. In previous years, far fewer VPNs worked with the official Netflix mobile app: about 80 percent of VPNs that did work with Netflix could do so on both mobile and desktop in 2018, compared to 99 percent in 2021. 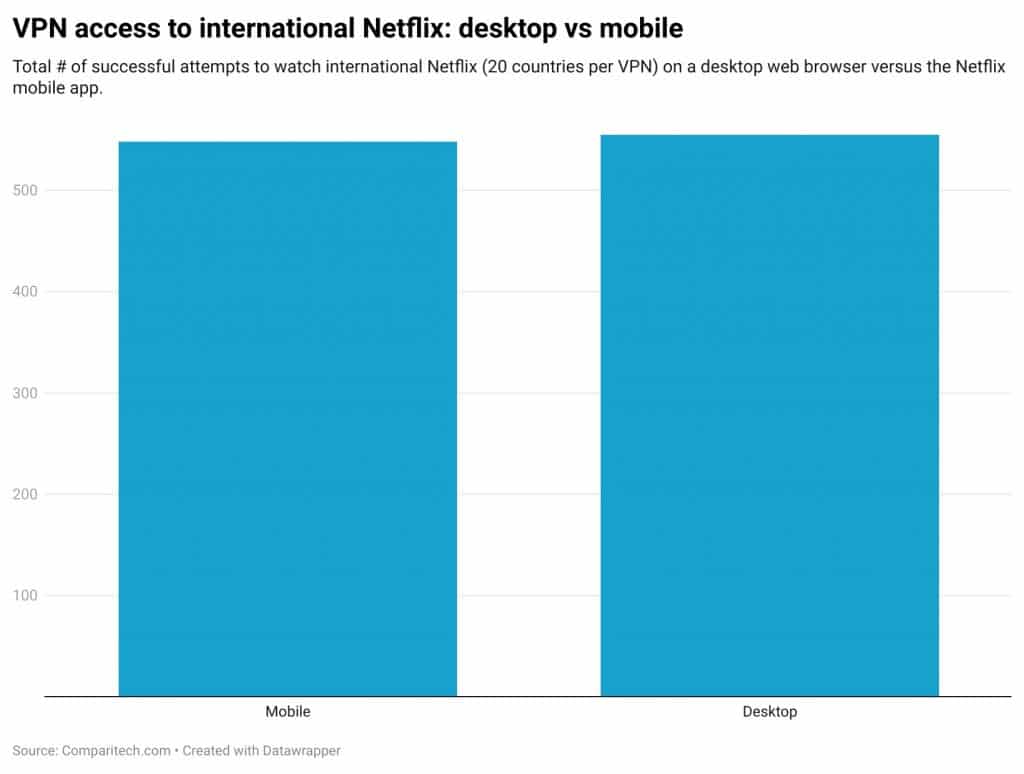 See also: Which countries pay the least and most for Netflix?

Our testers were instructed to do the following and record the results for each VPN and country:

To ensure accuracy, we repeated this entire process twice, for a total of about 3,000 individual tests on desktop and mobile.

In order for a VPN to pass our test, it must work with Netflix videos out of the box, meaning no manual configuration outside of the VPN app is necessary. It must also be able to securely access Netflix consistently—no reconnecting to the same server over and over in the hopes of finding an IP address that hasn’t been blocked. Finally, we used the paid subscription versions of VPNs when available.

A few VPNs bundle smart DNS proxies with their subscriptions, and some of those DNS proxies can access Netflix (e.g. Ironsocket DNS, Keenow Unblocker, ExpressVPN MediaStreamer). Due to time constraints and practicality, however, we elected not to test smart DNS services and instead solely focus on VPNs.

Aside from specifically testing VPNs with Netflix, we run extensive VPN testing to assess all major attributes of VPNs we recommend.

How to watch Netflix with a VPN (Video)

This video explains how to change Netflix region with a VPN so you can watch shows and movies from your home Netflix library while traveling abroad. For example, you can access US or Japanese Netflix from the UK, Australia, Canada or elsewhere.