Can't decide between Surfshark and AVG Secure VPN? We’ve put each Virtual Private Network to the test in this comparison to find out which is right for you.
James Milin-Ashmore 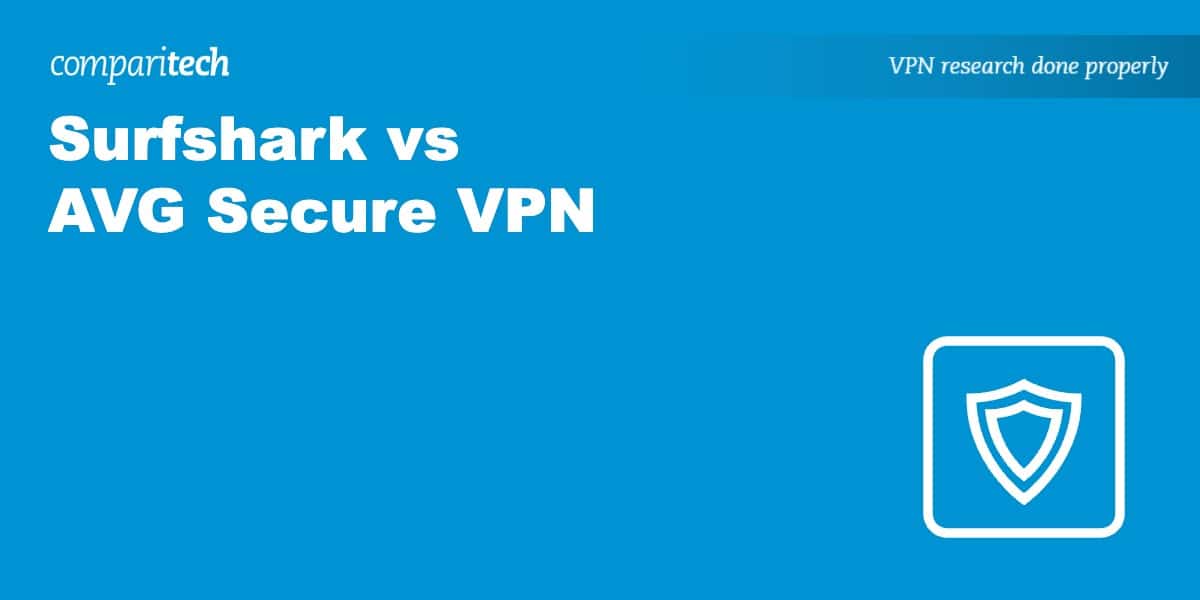 With so much variety, the market is flooded with VPNs to choose from, making it difficult to decide which to use. There’s lots of technical jargon to sift through, so we’ve put together this guide to compare two well-known providers: Surfshark and AVG Secure VPN.

This side-by-side comparison will look at the strengths and weaknesses of each service, as well as unique features, and how they stack up against each other. You’ll have a better idea of which VPN if any, is right for you.

If you need a quick answer; Surfshark is our winner. Read on to find out all of the important details and exactly how we came to that conclusion.

Both Surfshark and AVG offer a range of more affordable deals if you pay upfront, although the latter only offers one, two, or three-year subscriptions. The lack of a single month subscription from AVG Secure VPN is disappointing.

In comparison, Surfshark is priced at $12.95 for a single month. It drops to $3.99 per month if you pay for 12 months upfront. The two-year deal costs just $2.49 per month, and represents an 81% difference. It’s far cheaper than AVG Secure VPN.

Surfshark allows for unlimited device connections. An AVG Secure VPN account can be used with 10 devices.

Each provider offers a 30-day money-back guarantee, and AVG Secure VPN also comes with a 7-day free trial. (AVG used to offer a limited free tier, which was quietly removed.)

Best Deal for Surfshark:Get up to 84% off a Surfshark subscription when you sign up through Comparitech.

Best Deal for AVG:Pay as little as $3.99 per month when you subscribe to a 3-year plan.

Streaming and the ability to unblock additional restricted websites tend to be some of the more popular reasons for using a VPN. Surfshark is great for accessing content from a host of different platforms and countries, and it’s the better option of the duo by a significant margin.

Surfshark unblocks the majority of streaming platforms from the US and the UK with ease, and performed well during testing. It can change Netflix regions, and also works with Amazon Prime Video, Disney+, BBC iPlayer, and many more.

AVG Secure VPN wouldn’t be our go-to service in terms of accessing streaming sites like iPlayer or Hulu. It does access Netflix US, Netflix Germany, ITV Hub, and All 4, but it’s unreliable with almost everything else. It is worth mentioning that AVG has a collection of dedicated streaming servers, although their IP addresses appear to have been banned by some platforms. It’s not the worst result, but it’s not as good as Surfshark if you want a VPN for streaming.

When it comes to internet censorship, China is one of the most comprehensive countries in the world. The Great Firewall blocks everything from international news outlets to VPN websites. We’d advise you to install a VPN app to your device before you arrive. Even if you do have a VPN installed, there’s a high chance that the servers will have already been blacklisted when you try to connect.

Surfshark is one of the top VPNs for China thanks to their NoBorders feature. (Settings > Advanced > NoBorders). It’s specifically designed to be used in more restrictive regions, and will allow you to browse the internet anonymously.

AVG Secure VPN will have difficulties working in China, despite working in the region up until mid-2020. It might work, but it won’t give access as consistently as Surfshark. We recommend checking out our list of the best VPNs for China for an in-depth guide on using a VPN in China.

Capable desktop and mobile apps ensure that a VPN is easy to get to grips with. Both Surfshark and AVG Secure VPN have opted for user-friendly desktop clients for Windows and macOS, although AVG does lack a few secondary features.

AVG Secure VPN has a quick connect button in the middle of the screen, and the layout is similar for mobile apps. You can choose to show only the P2P or streaming-optimized servers. However, there’s no Linux support, no router support, and no desktop versions.

A frontrunner in this respect, Surfshark offers support for Linux, along with browser extensions for Google Chrome and Mozilla Firefox. You’ll find a trio of main tabs, along with a dual submenu. The mobile version uses the same design as desktop, with the sidebar found at the bottom of the screen.

Surfshark has an understated app design, but it’s still more comprehensive than AVG Secure VPN. There’s only one choice if you’re using Linux, or need to connect to a VPN via a browser.

It’s tough to compare the networks of AVG Secure VPN and Surfshark, but we can draw some conclusions despite AVG not disclosing its server numbers. What we do know is, Surfshark has 3,200+ servers in 95 countries, and AVG has 50+ server locations to choose from across 36 countries.

Some of Surfshark’s servers are of the virtual variety: you get a specific country’s IP address, but the server is physically located elsewhere. It’s how they can give access to locations like Nigeria and Russia, which many other VPNs can’t replicate.

Surfshark’s network is more in line with what we would expect from a premium VPN, while AVG’s total of 36 countries is a bit disappointing. On the plus side, AVG does have servers in less commonly-seen locations like the Czech Republic and Taiwan, which is notable.

Average download speed was roughly 50 Mbps with AVG Secure VPN in our tests, which is more than quick enough to stream in HD. However, Surfshark averaged 324 Mbps, which is nearly 6.5 times faster. In fact, Surfshark is on our list of the fastest VPNs. The extra speeds will make a difference, especially if you’re planning to stream simultaneously on multiple devices.

How do the providers perform in terms of security? Surfshark users can connect with the OpenVPN, IKEv2, and WireGuard VPN protocols. The more recently released WireGuard is easier to audit, and provides a significant boost to speeds and performance, even over long distances. Unfortunately, AVG Secure VPN currently only supports OpenVPN (UDP).

For encryption, AVG uses 256-bit AES with 4096-bit RSA keys, and Surfshark uses 2048-bit RSA keys. As you may have guessed, a higher number is better, even if both are secure. A kill switch will stop sending data if the VPN cuts out unexpectedly, and it keeps the user protected. Surfshark has a kill switch on every platform, but AVG Secure VPN only has it on Windows and MacOS.

For added security, SurfShark has the proprietary NoBorders software, which helps the user to get connected in restricted regions. In comparison, AVG has no additional cloaking features to speak of.

You should always pay attention to where a VPN is headquartered. The provider will be subject to local laws when it comes to data, which can have a big impact on privacy. You’ll want to avoid fourteen-eyes countries like the US and the UK, especially due to their shared intelligence agreements.

Based in the Czech Republic, AVG isn’t the best choice from a privacy perspective. You’ll have to provide your full name, email address, and ZIP code during registration, and it only supports credit card and PayPal payments. Logging isn’t much better, as it stores information such as what time you started and finished using the VPN, as well as the amount of data that was transferred.

Surfshark is based in the British Virgin Islands, which have no connection to the UK. The BVI has no mandatory data retention laws, making it an optimal choice in terms of privacy. You’ll be able to sign up with a throwaway email address, and there’s the option to pay anonymously for the VPN with Bitcoin.

As for logging, Surfshark only keeps limited information such as how often you use the service and if the app has crashed. Surfshark is a clear winner in terms of logging and privacy. In an ideal world, you would always use a logless VPN that does not hold any of your personal information.

As for the configuration, Surfshark and AVG Secure VPN both use shared IP addresses. This means that everyone connected to a specific server shares a single IP address. Everyone’s activities are mixed together, making it more difficult to identify what an individual user is up to at any given time. Neither VPN offers a dedicated IP address.

In an ideal world, you’d never have to contact a VPN’s customer support team. However, that’s not always going to be the case given the technical nature of the software. Both providers offer 24/7 support over live chat, which tends to be the most efficient way to solve most issues.

You’ll be able to email Surfshark, while AVG Secure VPN also offers phone support in the US, the UK, and Australia, which can be helpful if you’d like to get an issue solved straight away. It’s commendable, and a step beyond the average provider. You’ll also be able to request help via the AVG Secure VPN forums.

Of the two providers, AVG Secure VPN has superior customer support options. Support over the phone is ideal for less technical users, even if most will probably prefer live chat.

AVG Secure VPN still has a way to go if it’s going to be seen as a serious competitor to Surfshark. AVG has fewer server locations, and it’ll struggle to unblock as many websites. It’s based in Europe, the service is more expensive, and it lacks a one-month plan for greater flexibility. AVG also asks for more personal information when you sign up, which isn’t great from a privacy perspective.

In comparison, Surfshark ticks many of the important boxes if you’re looking for a capable VPN service. It’s one of the fastest providers on a range of devices, and it allows for unlimited device connections. It’s affordable, and it’s based in the BVI. Surfshark is great for streaming and torrenting, and it even works in countries like China.