Surfshark vs Hide My Ass (HMA)

Are you struggling to choose between Surfshark and Hide My Ass (HMA)? We compare the reputable VPNs by pitting them head-to-head, looking at features, pricing, and more.
James Milin-Ashmore 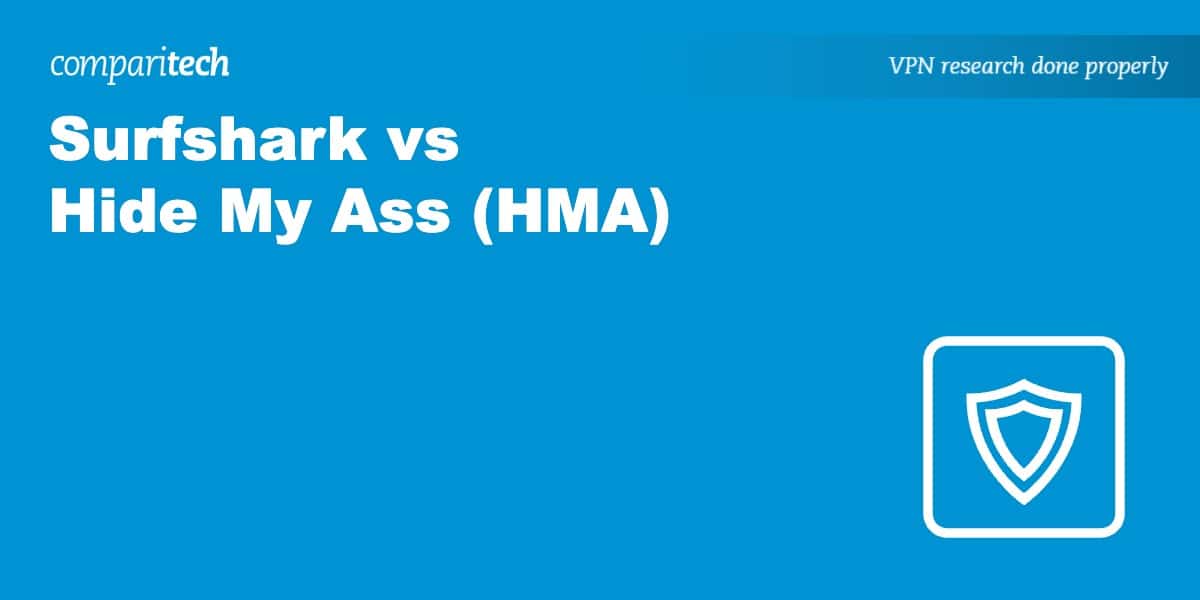 There are numerous Virtual Private Networks (VPNs) vying for your attention at any given time, but not all providers were created equally. VPNs are an easy way to improve your online security, but it can be tough to figure out which one to use.

Two of the more popular VPNs are found in the form of Surfshark and Hide My Ass (HMA). To help you to decide between the duo, we’ve put together this comparison looking at the strengths and weaknesses of each provider.

If you’d prefer a quick answer, we’d pick Surfshark as the winner in this particular showdown. Read on to find out how we came to that conclusion.

In terms of pricing, you’ll have to pay a bit more if you’re only looking for short-term coverage. HMA comes in at $11.99 for a single month, while Surfshark is $12.95. It’s not a major difference, and each service offers great value for money when factoring in speeds and security.

However, Surfshark works with unlimited simultaneous devices, while HMA has different pricing scales based on how many devices you’d like to connect with. HMA allows for five devices by default, and you can pay extra for 10 device connections.

Each VPN offers major discounts if you’re interested in yearly or multi-year plans. You will have to pay the entire amount up front, but it’s a great way to save money in the long run.

Surfshark is a clear winner in terms of pricing. The longer deals are highly affordable, and the VPN can be used with unlimited devices. It also comes with a 30-day money-back guarantee. It’s worth mentioning that HMA does offer a seven-day free trial, which can be used to test the service.

The majority of streaming services are region locked, so some content is only available in specific locations. Platforms like Netflix have also taken to detecting and blocking VPNs, so many providers are unsuitable for streaming. That’s not the case with either HMA or Surfshark.

HMA is perfect for accessing a range of region locked content. You can change region on Netflix and access with like BBC iPlayer, Hulu, HBO Max, and more. The provider has multiple streaming-optimized servers to choose from.

Surfshark unblocks almost any streaming service you can throw at it, to the extent that it outperforms HMA. For example, Surfshark servers can access versions of Netflix in the US, UK, France, India, Japan, Netherlands, and more.

With the ability to access additional major platforms, we’d opt for Surfshark if you plan to stream frequently. With that being said, HMA is still capable of consistently bypassing geo-blocks.

China is one of the more difficult countries to use a VPN in. Many providers are blocked entirely, despite numerous Chinese citizens who would like to bypass the Great Firewall. It’s a great indicator of how committed a VPN is to bypassing geo-restrictions.

This is another area in which Surfshark has a clear advantage. It’s one of the best VPNs for China, and can be used to get past the tough internet restrictions seen in the region. To access the internet safely and anonymously in China with Surfshark, simply turn on the NoBorders feature (Settings > Advanced > NoBorders).

Unfortunately, HMA does not work reliably in China at time of writing. The Great Firewall currently blocks access to Surfshark’s website while in China. You’ll need to install your preferred VPN before arriving in the region.

Both Surfshark and HMA have made sure that their desktop and mobile apps are simple and easy to use.

Surfshark has gone for a more understated approach, offering a quick connect button on the main screen to get started. It lists servers you’ve recently connected to, as well as the option to connect to the fastest P2P server. The setup is similar with the mobile app, aside from a sidebar that runs along the bottom of the screen. It could do with a more intuitive menu, although this isn’t a major issue.

HMA offers user-friendly apps for desktop and mobile. It lists an additional category for streaming-optimized servers. You’ll be able to connect with a single click. It comes with a robust settings menu that includes split tunneling, or to use an IP shuffle for greater anonymity.

This can also be evidenced when looking at our speed test results. Surfshark comes in with an average speed of nearly 324 Mbps, which is far higher than HMA’s 109 Mbps. Speeds are still more than fast enough for tasks like HD streaming and torrenting, but it’s still a significant difference.

The speed test results mean you’re likely to experience minimal latency with Surfshark, and it shouldn’t struggle during peak hours.

Surfshark’s total of 95 countries is impressive, but it’s blown out of the water by the 200+ covered by HMA. It’s the largest collection of server locations that you’re likely to find on the market.

Both providers make use of virtual servers to offer their services in countries such as Paraguay, Liberia, Nigeria, Russia, and the UAE. These servers are physically located elsewhere, and offer coverage in regions with a more delicate political climate. Aside from their true location, there’s not much difference between using a virtual server and a physical server.

However, the average user is more likely to be interested in connecting to high-traffic regions such as the US and the UK. In that respect, Surfshark is better when it comes to servers and overall performance.

Both Surfshark and HMA use AES-256 encryption. This is the industry standard, and it’s effectively uncrackable. However, HMA uses 4096-bit RSA keys to let your device communicate with your VPN server privately, while Surfshark uses 2048-bit RSA keys. These are still secure, but not as future-proof.

Surfshark supports the OpenVPN, IKEv2, and WireGuard protocols. WireGuard is often faster, and should be easier to audit thanks to fewer lines of code. HMA doesn’t support WireGuard as of yet, and it uses the OpenVPN protocol by default.

HMA and Surfshark both have kill switches in case your connection drops out unexpectedly. They each use their own DNS servers, so no third party will ever have access to your traffic.

In terms of additional security features, HMA has an IP shuffle, which changes your address periodically to improve privacy. Surfshark’s proprietary NoBorders software is also worth mentioning; it hides that you’re using a VPN in the first place. NoBorders works by reshaping your traffic to hide the common patterns used by VPNs.

Depending on where a VPN is based, that country’s privacy laws will apply to your personal data. For example, HMA operates within the UK, which isn’t great from a privacy perspective. The UK is a founder of the Fourteen Eyes security alliance, which means it can share your online activities with other members.

Surfshark is based in the British Virgin Islands, which has no mandatory data retention laws to speak of. It’s also outside of the clutches of the Fourteen Eyes security alliance.

HMA and Surfshark use shared address systems, so everyone connected to a specific server shares a sole IP address. This is great for privacy, as hundreds of different users will access multiple sites and services at the same time. It’s hard to tell what anyone is up to, providing plausible deniability.

In any case, it shouldn’t matter as neither Surfshark nor HMA keeps any activity logs. Shared addresses are still helpful just in case there is an issue and data is logged unexpectedly.

Ideally, you’ll never have to contact customer support, but there’s always a small chance that something could go wrong considering the technical nature of VPN apps. Surfshark has 24/7 live support. You should get a response within seconds. For regions in which you can’t access live chat, such as China, you’ll be able to send Surfshark an email.

HMA is one of the few major VPNs that doesn’t offer live chat, which is a disappointing result. It does say that live chat is available on the website, but the option appears to have been removed. You will be able to contact support via email, while they offer a searchable knowledge base. HMA also has a forum, which may prove to be helpful.

Surfshark has a significant advantage thanks to the addition of live chat, which is responsive if you do have a query.

HMA does the job effectively, and it’ll give you an IP address in numerous far-flung locations. It comes with a seven-day free trial, and it’s great at unblocking streaming services. It also uses 4096-bit RSA keys.

However, Surfshark is the winner in most respects, and that gives it the obvious edge in this head-to-head. After all, it’s cheaper if you’re looking at longer deals, and it’s significantly faster. It also has more servers than HMA, allows access to more blocked sites, and can even bypass the Great Firewall in China. Surfshark is based in the privacy-friendly BVI, and it has a robust support system, including live chat.

It’s not as simple as discounting HMA, which is still a great provider in its own right. However, we’d opt for Surfshark as the superior VPN service.