How to watch DisneyNow abroad (outside US) with a VPN

Want to watch your favorite Disney Channel TV shows online abroad? DisneyNow is unfortunately region-locked to the US, however, with a VPN you can watch DisneyNow from anywhere.
Mark Gill TECH JOURNALIST, VPN AND PRIVACY SPECIALIST 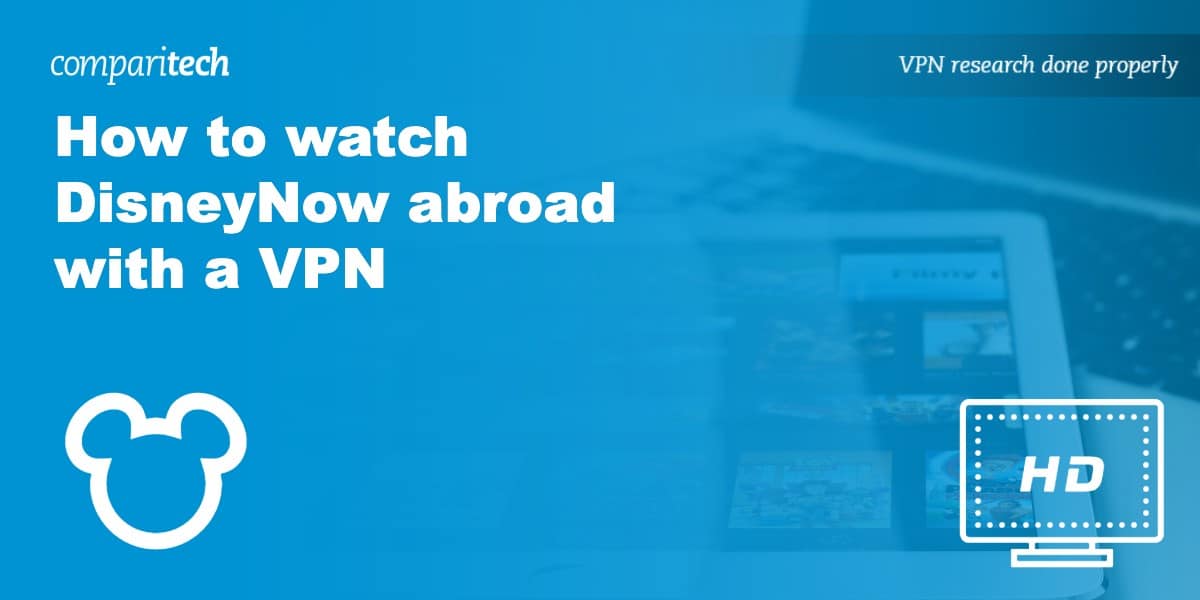 If you’re outside the US, whether living abroad or on holiday, you’ll likely come across the following message when trying to stream Disney Channel content: 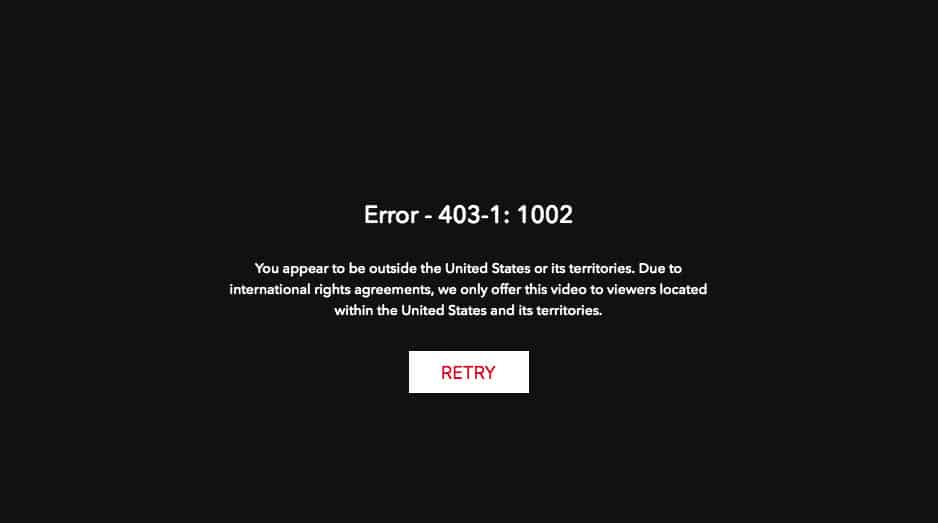 Don’t worry! This simply means that the content you’re trying to access is region locked. With a VPN (Virtual Private Network), you should be able to watch DisneyNow abroad. The VPN encrypts your internet traffic, routing it through one of its own servers (this should be a US-based server). Any website or service you access will see the new IP address you’ve been provided, allowing you access.

Before we explore how to watch DisneyNow outside the US with a VPN, here’s a quick summary of the best VPNs for doing so:

Best VPNs for watching DisneyNow outside the US:

How to watch DisneyNow abroad with a VPN

It’s worth noting that DisneyNow is only available to Disney Channel subscribers via participating television providers. Aside from using a VPN, you’ll, therefore, have to be signed in via your TV provider subscription in order to unblock the content. You can watch DisneyNow abroad by following the steps below.

Here’s how to watch DisneyNow abroad:

While connecting to a VPN server and unblocking DisneyNow is relatively easy, choosing a VPN can be a little more time-consuming. We’ve attempted to make this easier for you by narrowing down the options. In order to be chosen, each VPN had to meet the following conditions:

Here’s our list of the best VPNs for watching DisneyNow from anywhere:

ExpressVPN is the perfect VPN for watching DisneyNow abroad. With servers in New York, Washington DC and New Jersey, there’s plenty of options for unblocking content that is only available to the US. Aside from DisneyNow, this includes Netflix US. In fact, ExpressVPN can also unblock Amazon Prime Video, BBC iPlayer and DAZN. Overall, ExpressVPN has more than 3,000 servers in 94 countries. The fast speeds make it ideal for streaming.

Whether you’re experienced or entirely new to VPNs, ExpressVPN is impressive. The apps and browser extensions are intuitively designed and it’s easy to connect to a server or adjust your preferences. ExpressVPN provides 24/7 customer support via live chat and email should you need it. We’ve tested this out for ourselves and can say that it’s excellent. ExpressVPN are always quick to reply and helpful in their answers.

While it’s great to have a VPN that performs well when streaming DisneyNow abroad, your online security is of equal importance. ExpressVPN states that it doesn’t keep any identifying logs of its users. What’s more, it uses 256-bit AES encryption and protects you from DNS leaks. Last but not least, there’s also split tunneling, a kill switch and the option to pay for ExpressVPN in Bitcoin.

BEST VPN FOR DISNEYNOW:ExpressVPN is our top choice for DisneyNow. Fast servers in 94 countries, including the US. Unblocks streaming services including Netflix. Easy to use for beginners, reliable 24/7 live chat support and highly secure with encryption and kill switch. A 30-day money-back guarantee means you can try it risk-free, no questions asked.

NordVPN is another VPN that lets you watch DisneyNow outside the US. What sets this VPN apart from its rivals is that it has a huge network of over 5,000 servers, over 1,700 of which are in the US. Needless to say, this means you can unblock plenty of geo-restricted content including Netflix and Amazon Prime Video. So many servers also means less load and this is apparent in the fast and consistent connections when browsing and streaming with NordVPN.

You’ll find that NordVPN offers a wide range of user-friendly apps and browser extensions, making the VPN experience quick and convenient. Particularly good value is the fact that you can connect up to 6 of your devices simultaneously via a single NordVPN account. NordVPN has a strict no-logs policy, ensuring your data stays with you. Aside from this, it uses 256-bit AES encryption, offers DNS leak protection and has an automatic kill switch feature.

1,700+ US SERVERS:NordVPN has more servers in the US than most VPNs on the market. Use it to watch DisneyNow, Netflix US and more. Allows up to 6 simultaneous connections and offers 24/7 support. Protects your privacy with a no-logs policy. 30-day money-back guarantee.

CyberGhost has just over 700 servers in the US at the time of writing, making it easy to unblock DisneyNow. This Romania-based VPN service has a network of almost 3,700 servers, allowing you to unblock US Netflix, Amazon Prime Video and more. Indeed, you’ll be able to stream stress-free thanks to the fast and consistent connections. Good value can be had with CyberGhost because it lets you connect up to seven devices simultaneously.

As with any good VPN service, CyberGhost offers customer support. This is available 24/7 via live chat. However, you’re unlikely to need this very much as CyberGhost’s apps are very simple to use. With a strict no-logs policy, CyberGhost is one of the more secure VPNs you can use. 256-bit AES encryption, DNS leak protection and an automatic kill switch all enhance your online security. What’s more, CyberGhost offers a lengthy money-back guarantee of 45 days.

CyberGhost offers apps for Windows, Android, Mac, iOS, Android TV and Amazon Fire Stick. Browser extensions are available for Chrome and Firefox. However, Linux and routers have to be set up manually.

45-DAY RISK-FREE TRIAL:CyberGhost is a strong all-rounder offering great speed and security. Watch DisneyNow and Netflix US abroad. Secure up to 7 devices simultaneously. Encrypts your traffic and has a strict no-logs policy. Includes an impressive 45-day money-back guarantee.

IPVanish is a VPN service headquartered in the United States. With servers in 18 US cities, you should have no problem unblocking DisneyNow. We found servers to be more than fast enough for streaming content in high definition with no issues of buffering or lag. What makes this VPN particularly good value is that it lets you secure up to 10 of your devices simultaneously (most VPNs allow 6 at most).

A particularly popular option with torrenters and Kodi users, IPVanish is quick and easy to use. This VPN service also offers live chat support, available 24/7. We’ve found that IPVanish has strong security, using 256-bit AES encryption and providing DNS leak protection. IPVanish states that it operates its own servers and has a zero-logs policy. It also offers a kill switch, ensuring that your data isn’t leaked in the event of the VPN connection dropping.

SERVERS IN 18 US CITIES:IPVanish works well with DisneyNow as it has many servers across the USA. Users can have up to 10 simultaneous connections. Strong security with encryption, kill switch and no-logs policy. 7-day money-back guarantee.

PrivateVPN is an option well worth considering if you want a high-speed VPN service for streaming DisneyNow abroad. With servers in US cities including Chicago, Las Vegas and New York, it’s great for unblocking streaming services such as Amazon Prime Video and Netflix. PrivateVPN has servers in 60 countries in total, which means you’ll be able to unblock geo-restricted content from all over the world.

Having tested the PrivateVPN apps, we can say they’re very easy to use. There are both simple and advanced menus available, catering to different levels of users. PrivateVPN lets you connect up to 6 devices simultaneously. Concerning security, you can expect 256-bit AES encryption, protection from DNS leaks and a kill switch. Furthermore, PrivateVPN doesn’t keep any traffic logs and lets you sign up and pay anonymously.

PrivateVPN apps can be downloaded for desktop (Windows and Mac) and mobile (Android and iOS). Linux and routers require some manual configuration.

GREAT FOR STREAMING:PrivateVPN offers fast connections for streaming DisneyNow outside the US. Features user-friendly apps and lets you connect up to 6 devices simultaneously. No-logs policy protects your privacy. 30-day money-back guarantee.

Finding the best VPNs for watching DisneyNow abroad: our methodology

Many VPNs offer servers in the US. However, not all successfully unblock DisneyNow or have sufficient speed for streaming its content. We consider a wide range of factors when looking for the best VPNs for watching, as outlined below:

Through our VPN testing methodology (this involves test related to speed, security, and more), we’re able to identify the best VPNs for watching DisneyNow.

Can I use a free VPN to watch DisneyNow abroad?

Due to the geo-restrictions on Disney Channel content and the use of anti-VPN measures, it’s highly unlikely you’ll be able to use a free VPN to watch DisneyNow abroad. Besides, we generally advise against the use of free VPNs for a number of reasons.

In particular, free VPNs offer poor performance. In the unlikely event that you unblock DisneyNow with a free VPN, you’ll probably encounter slow streaming with buffering and lag in abundance. Much of this is down to the fact that free VPNs have too few servers for their many users. They may well restrict your bandwidth as a result in an attempt to manage this.

Apart from being able to unblock geo-restricted content such as that of DisneyNow, a VPN should provide you with security online. Free VPNs lack essential security features which may mean they don’t offer encryption, protection from DNS leaks, or a kill switch. Some may even log your data and sell it to third parties. A quality paid VPN is the solution to this.

What can I watch on DisneyNow with a VPN?

DisneyNow offers a variety of Disney Channel content both live and on-demand, having replaced the separate apps that were available for Disney Channel, Junior, and Disney XD. Here’s a list of just some of the TV shows you can watch on DisneyNow: