How to watch DMAX abroad (outside Italy) with a VPN

Traveling abroad but still want to watch DMAX? By using a Virtual Private Network (VPN), you’ll be able to live stream DMAX and any other geo-blocked content from anywhere in the world.
Mark Gill TECH JOURNALIST, VPN AND PRIVACY SPECIALIST 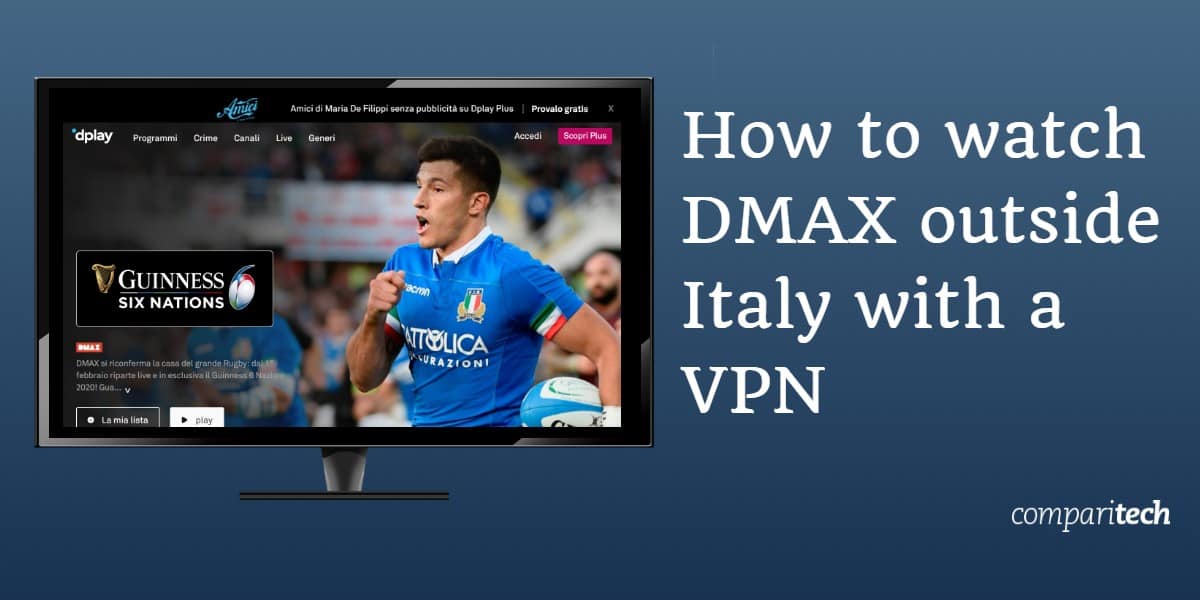 DMAX is region-locked and its content varies from one location to another. For instance, if you try to access the Italian version of DMAX from outside of Italy, you’ll encounter a black screen and find that content doesn’t load. Fortunately, you can live stream DMAX while traveling abroad by changing your IP address. To do this, you’ll need a VPN.

A VPN routes your internet traffic to one of its own servers through an encrypted tunnel. By choosing to connect to a server in Italy, you can obtain an Italian IP address. This makes it appear as if you’re browsing the web from Italy. You’ll then be able to watch DMAX abroad without restriction.

How to watch DMAX outside Italy with a VPN

Here you’ll find a quick guide to unblocking DMAX outside Italy with a VPN. You can follow these simple steps to unblock most geo-restricted content.

Here’s how to watch DMAX online abroad (outside Italy) using a VPN:

There are many VPN providers on the market, so choosing a VPN to watch DMAX outside Italy can be a daunting prospect. With this in mind, we’ve narrowed down the options by only recommending VPNs that meet the following criteria:

We’ll cover each of the best VPNs for watching DMAX outside Italy in more detail below. First, here’s a quick summary in case you don’t have time to read the full article.

Here’s our list of the best VPNs for watching DMAX abroad (outside Italy):

ExpressVPN is a safe choice when it comes to unblocking DMAX abroad. This is thanks to its fast servers in Italy that make streaming DMAX stress-free. You won’t have to contend with buffering or lag, plus you have the choice of over 3,000 servers in 94 countries. ExpressVPN’s strong unblocking ability means you can also use it with Netflix, Amazon Prime Video, BBC iPlayer, and more. A single subscription allows you to secure five devices simultaneously.

This is a VPN that includes 24/7 live chat and email support, making it easy to resolve any issues you might encounter. Regardless, ExpressVPN apps are extremely easy to use and let you connect to a server in mere seconds. You can browse the web with peace of mind as ExpressVPN doesn’t keep logs by which you can be identified. Your data is further secured through 256-bit AES encryption, a kill switch, and DNS, IPv6, and WebRTC leak protection.

ExpressVPN has apps for desktop (Windows, Mac, and Linux), mobile (Android and iOS), as well as custom router firmware. Browser extensions are offered for Chrome and Firefox.

NordVPN is an established VPN provider with an impressive global network of servers. It has some 5,000 servers in total, dozens of which are located in Italy. In fact, NordVPN offers specialty Italian servers. This includes those optimized for P2P-related activities as well as obfuscated servers for bypassing internet restrictions in countries with strict online censorship. Aside from DMAX, NordVPN also works with Netflix and Disney+.

You’ll find this VPN to be packed with features including user-friendly apps and excellent 24/7 live chat support. Furthermore, you can use NordVPN to connect up to six devices simultaneously. When it comes to your online security, NordVPN ticks all the boxes. 256-bit AES encryption, a kill switch, and protection from DNS and IPv6 leaks combine to keep you safe online. Better still, there’s a strict no-logs policy which means your personal information stays private.

If you sign up for NordVPN, you’ll be able to download VPN apps for Windows, Mac, Linux, Android, and iOS. There’s also an app for Android TV and browser extensions for Chrome and Firefox. Manual configuration is required for use with compatible routers.

BEST BUDGET VPN:NordVPN has a strict no-logs policy and unblocks DMAX outside Italy. Vast global network of over 5,000 servers. Includes 24/7 support and lets you secure six devices at once. Specialty Double VPN and Onion Over VPN servers. 30-day money-back guarantee.

CyberGhost has a vast network of well over 5,000 servers located in 90 countries. This service offers access to more than 100 Italian servers which means you can access DMAX with ease from anywhere in the world. Fast speeds and unlimited bandwidth make this a very good choice for streaming. Indeed, it even unblocks Netflix US. If you have lots of devices to secure, you’ll be pleased to know that CyberGhost lets you connect seven devices at once.

Aside from offering excellent speeds for streaming, CyberGhost is a highly secure service. It includes a strict no-logs policy, allowing you to browse anonymously. There’s also 256-bit AES encryption, DNS and IPv6 leak protection, and an automatic kill switch feature. You can even pay in Bitcoin for even greater anonymity. Should you have any questions, live chat and email support are at hand, 24/7.

GOOD VALUE VPN:CyberGhost offers excellent value with its fast servers and strong security. A no-logs VPN with 24/7 live chat support, it unblocks DMAX as well as Netflix US. Use it to connect up to seven devices simultaneously. Includes a 45-day money-back guarantee.

IPVanish is a great VPN for streaming thanks to its network of over 1,000 servers in 60 countries. With nearly two dozen servers in Milan, you can unblock and live stream DMAX when traveling abroad. You can even use this VPN to watch Netflix US thanks to the hundreds of US servers on offer. IPVanish is particularly generous when it comes to simultaneous connections — it lets you secure as many as 10 devices at once.

When it comes to ease of use, IPVanish certainly stands out. While you shouldn’t have any issues with the apps, 24/7 support is available via live chat. IPVanish doesn’t keep any logs and uses 256-bit AES encryption, DNS leak protection, and a kill switch to safeguard your data. Further, IPVanish owns rather than rents its servers. This reduces the risk of any third-party server interference.

You can secure your devices via the IPVanish apps for Windows, Mac, Android, iOS, and Amazon Fire TV. This VPN can also be configured manually on Linux and supported routers.

ZERO-LOGS POLICY:IPVanish protects your privacy with its no-logs policy. Works with DMAX as well as Netflix US. Secure as many as 10 devices simultaneously. Offers 24/7 live chat support and easy-to-use apps for desktop and mobile. 7-day money-back guarantee.

PrivateVPN has a smaller network of around 150 servers though these are spread across 60 countries, Italy included. This means you can unblock all sorts of geo-restricted content worldwide. Aside from DMAX, PrivateVPN works with popular streaming services such as Netflix and Amazon Prime Video. One of its standout features is its speed which allows for lag and buffering-free streaming in high definition.

When you use PrivateVPN, you’re protected from the likes of hackers and snoopers. This is evidenced by this VPN’s use of 256-bit AES encryption. PrivateVPN is a no-logs service that also offers DNS leak protection and a kill switch. You can even register for this VPN anonymously by using a burner email account and paying in Bitcoin. While PrivateVPN is easy-to-use for beginners, live chat support is offered should you have any questions.

PrivateVPN apps are available for the following operating systems: Windows, Mac, Android, and iOS. You can also use this VPN with Linux and routers though this requires manual installation.

Surfshark is one of the better VPNs on the market when it comes to unblocking content. It has more than 1,000 servers in 60 countries, including Italy. You can use it to watch DMAX outside Italy as well as unblock many other streaming services such as Netflix and BBC iPlayer. Furthermore, speeds are fast enough to stream without any noticeable buffering or lag. While most VPNs let you secure only a handful of devices, Surfshark offers unlimited simultaneous connections.

The many security features included with Surfshark make it an excellent choice for privacy-minded users. For starters, it has a strict no-logs policy. Also included are 256-bit AES encryption, DNS leak protection, and a kill switch. You’re protected from unwanted ads and malware thanks to the ‘CleanWeb’ feature plus you can also connect to Double VPN servers for an extra layer of security. While 24/7 live chat support is available, the apps and browser extensions are very simple to use for beginners.

You can secure all of your devices via the Surfshark apps for Windows, Android, Mac, iOS, Linux, and Amazon Fire TV. Chrome and Firefox browser extensions can also be downloaded. Surfshark requires manual setup for use with select routers.

Hotspot Shield has servers in three cities in Italy, allowing you to access DMAX from anywhere. It offers an extensive network of physical and virtual servers in more than 80 countries worldwide. Whether you’d like to unblock social media sites such as Facebook and Instagram or streaming services including Netflix, Hotspot Shield is well worth considering. What’s more, this is one of the faster VPNs on the market.

A single Hotspot Shield subscription lets you secure up to five devices at once. This VPN includes 24/7 live chat support so you can easily resolve any doubts you might have. When it comes to security, Hotspot Shield uses 256-bit AES encryption, DNS leak protection, and a kill switch. It also states that it doesn’t keep any “permanent identifiers of users” and doesn’t log IP addresses.

You can connect to a server in Italy via the Hotspot Shield apps for Windows, Mac, Android, and iOS. Note that no support is offered for use with Linux or routers.

SERVERS IN 80 COUNTRIES:Hotspot Shield has an impressive server network. Servers in Italy for streaming DMAX from anywhere. Also works with Netflix. Includes 24/7 support and security features such as encryption and a kill switch. 45-day money-back guarantee.

Can I watch DMAX outside Italy with a free VPN?

The trouble with many free VPNs is that they often have a very limited number of servers on offer. Heavy server load results in slow speeds which negatively impact streaming in the form of lag and buffering. Furthermore, most free VPNs are limited in the content they can unblock. For example, very few free VPNs are able to unblock the likes of Netflix and DAZN. While the above-recommended VPNs all work with DMAX, many free VPNs won’t.

The average free VPN also tends to be very light on features. This is particularly concerning when related to security. The free VPN you use might not encrypt your data or protect you from leaks, leaving you vulnerable to hackers. Finally, free VPNs have to find some way to make money. Unfortunately, this is often through spam advertising or, even worse, logging and selling your data to third parties without your consent.

What can I watch on DMAX?

DMAX features a wide range of content (Italian and international) covering topics that include crime, food, music, nature, and people. In fact, DMAX is covering all matches in the 2020 Six Nations Championship. Here are some of the TV shows you can watch on DMAX: