Kodi can be installed on a huge range of devices including the Raspberry Pi, Amazon Fire TV, and Roku. However, installing addons and changing settings on a set-top streaming device can be very difficult without a dedicated keyboard. In some cases, you could use yourPC keyboard, but not all devices work with a traditional keyboard.

With the sheer number of low-quality Kodi keyboards on the market, it can be difficult to find the few products that are actually worth your time and money. To help, we’ve thoroughly researched the market and chosen five of the best Kodi keyboards available as of November 2017.

We strongly recommend using a virtual private network (VPN) with Kodi. These encrypt your network traffic and keep you safe from Man-in-the-Middle attacks and ISP snooping. A VPN also allows you to watch geolocked content simply by connecting to a server in the correct country, We recommend IPVanish. It’s a fast, stable VPN that keeps no logs of your activities and can be installed on almost any platform including the Amazon Firestick.

Before we get to the individual keyboard reviews, it’s important to know how we reached our conclusions. While we usually personally test the products we review, the Kodi keyboard market is so broad that this just wasn’t possible in this case. Instead, we’ve taken several other criteria into account and used these to form a basis for our Kodi keyboard recommendations:

It should be noted that Kodi is best experienced with a remote control and a keyboard for text entry. We will be writing a remote control article in the near future and will link to it from this article. However, Kodi can be used entirely with the keyboard, making a dedicated keyboard the first item you should buy for a new Kodi-based home theater system.

The best Kodi keyboards of December 2017 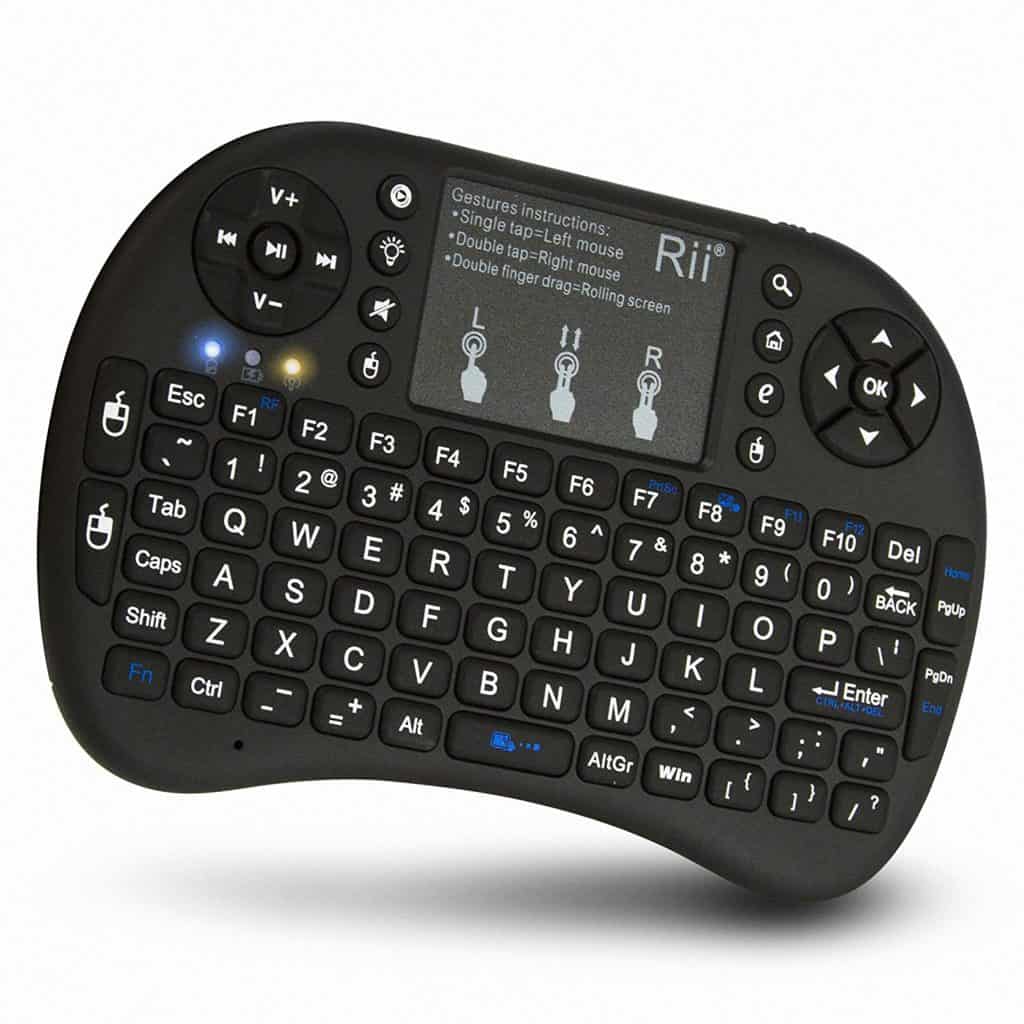 One of the first things you’ll notice about the Rii i8+ is its unusual shape. It’s almost like a joypad and the front of it is so covered in buttons that there’s very little space left over. That said, this product offers total control over Kodi thanks to its small, gesture-supporting touchpad and full QWERTY keyboard. This keyboard is backlit too, making it perfect for using Kodi with the lights off.

There are two versions of this keyboard; one uses Bluetooth, the other uses 2.4GHz radio signals. We decided that the latter version would be more suitable for most users because it doesn’t rely on a device having Bluetooth support. As such, this keyboard will work on any device with a USB port including PC, Raspberry Pi, and Amazon Fire TV.

Both versions use a Mini-USB cable to charge an internal battery, and the 2.4GHz version requires a free USB port for its receiver.

Currently, the Rii 8+ has over 1600 reviews on Amazon and more than half of these are five-star ratings. However, some buyers have experienced issues where the touchpad registers gestures when none are intended, and others have found that it can be hard to find the right button combination to enter certain characters. The touchpad can be locked to prevent this, though, and it’s unlikely you’ll have to remap anything since all of the punctuation keys are exactly the same as they are on a full-sized keyboard.

The Logitech K830 is a far more traditional keyboard than the Rii i8. Its keys are far better spaced so there’s less chance of mistyping. Its backlight checks the lighting in your environment before automatically adjusting itself. In automatic mode, this backlight will kick in whenever it gets dark, which is a nice touch.

This keyboard can be used either via Bluetooth or radio and is compatible with any Android, Windows, Linux, or ChromeOS Kodi installation. It has a rechargeable battery that takes three hours to charge but has a 20-hour life.  Those numbers represent 20 hours of constant usage, so in reality, it’ll probably last for weeks between recharges.

There’s a small button on the left-hand side of the top. This button left-clicks and is designed to facilitate easier, two-handed web-browsing. Despite its placement, this button isn’t particularly prone to accidental activation and could be used to navigate Kodi’s menus more comfortably than by using the trackpad and laptop-style mouse buttons alone.

This keyboard costs $39.99.  Despite its higher than average price, it currently enjoys a four star rating on Amazon. By all accounts, it should continue to work long after purchase.

There is a small but noticeable amount of delay when using the touchpad. Considering this is marketed as a “living room” keyboard, it really isn’t designed for heavy-duty use and as such, this is a relatively small issue. 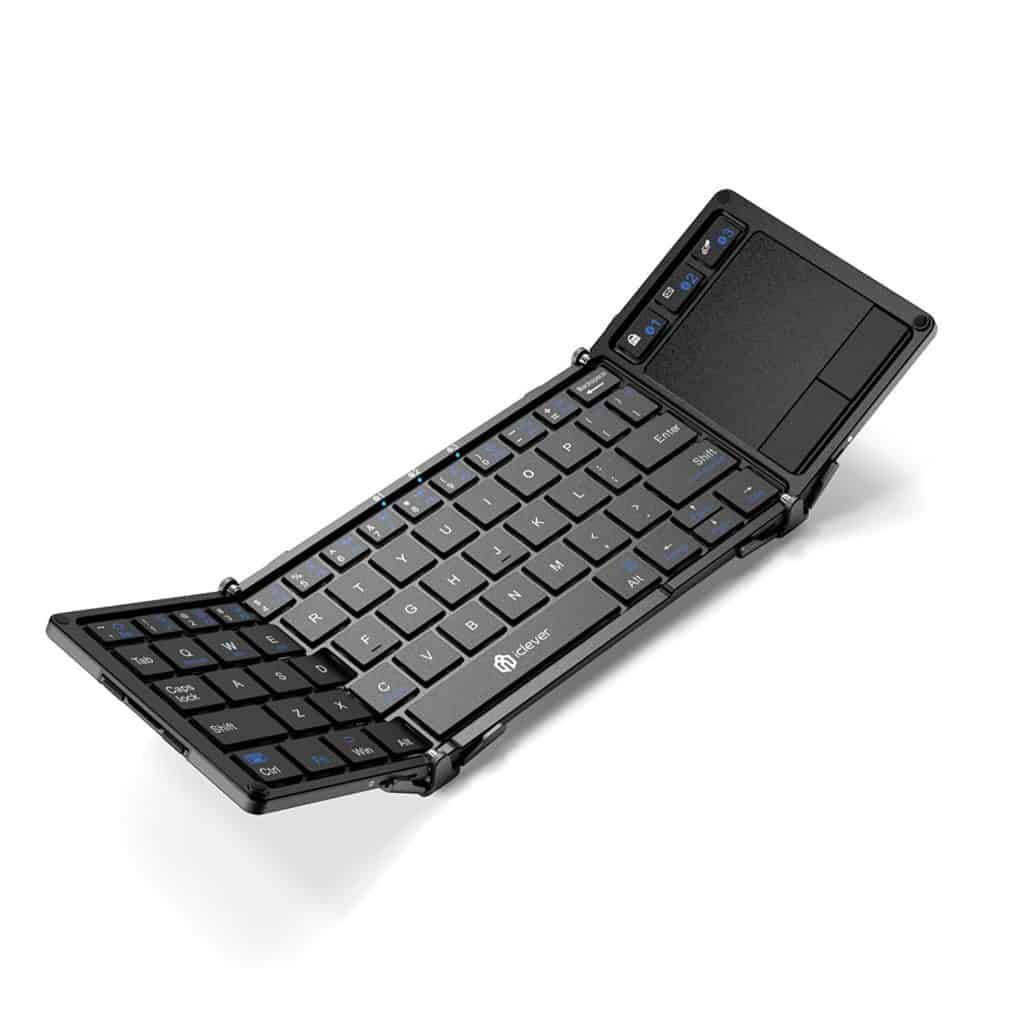 Kodi can be installed on portable devices like USB sticks and Raspberry Pis, so it makes sense that you’d need a keyboard that has an equally low profile. The iClever keyboard is just 7” wide and its sides fold in to reduce this even further.

When folded, this keyboard enters sleep mode and once unfolded, wakes and automatically pairs with up to three devices. Despite its small size, the keys are well-sized. This helps to minimize the number of typing errors you make—an especially important feature with Kodi as a single typo can cause errors when connecting to addon sources.

The iClever keyboard’s body is made of aluminum. Additionally. the internal battery lasts for up to 60 hours on a single charge. These features make the iClever keyboard an excellent choice for those looking for a truly portable Kodi system.

This keyboard is more expensive than many others, including some that offer better connectivity or additional functionality. That said, you’re really paying for the ability to take this keyboard anywhere you go. While iClever isn’t as well-known as Logitech, this product is held in high regard by many other reviewers.  There’s even a lifetime guarantee in case something goes wrong down the line. 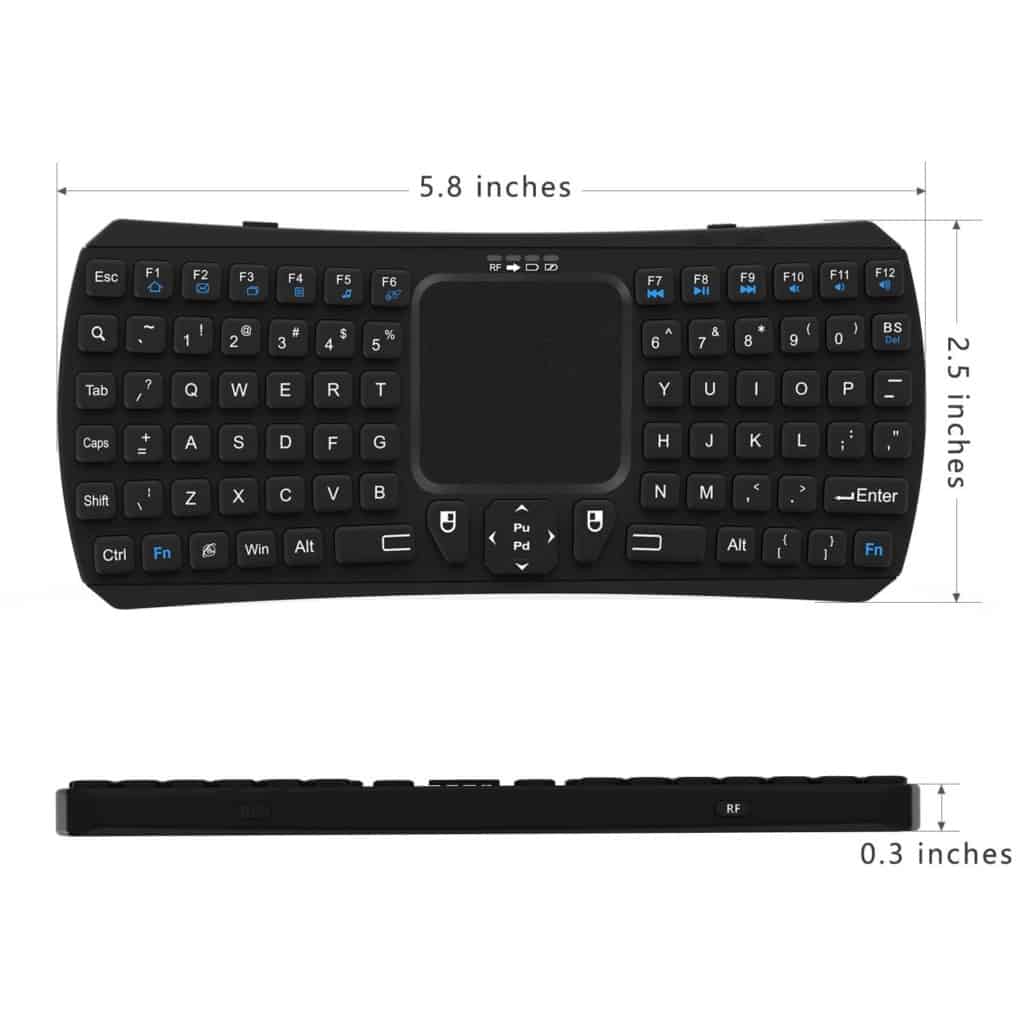 The Jelly Comb keyboard is 6” wide and is essentially a cell phone keyboard turned on its side. There are a couple of differences, however. First, this model has two space bars and FN keys, one on each side. Second, there’s a touchpad, arrow keys, and two mouse buttons. This keyboard’s small size and wide range of media keys make it a less expensive alternative to the iClever model, but the tradeoff is that this is very much an “at home” keyboard.

One of the reasons for this is that it lacks Bluetooth functionality. Instead, it uses radio frequencies and the receiver requires a USB port, making it unsuitable for iPhone and Android Kodi installations. That said, due to its remote control-style design, this keyboard feels natural to use. It has more than 140 glowing reviews on Amazon, and the only issue with it is that it goes into sleep mode every five minutes and takes a few seconds to wake up.

The Jelly Comb is the least expensive keyboard in our list, at $19.99. Surprisingly, even though it’s so inexpensive, it comes with a lifetime warranty.Many of this product’s reviews attest to it working for long periods of time, so with luck, you’ll never need to make use of the warranty at all.

The Microsoft N9Z-00001 is a multi-platform, spill-resistant keyboard that comes with an enlarged touchpad and three customizable hotkeys. It uses radio frequencies to connect, so your device needs to have at least one USB port for this keyboard to work. Unfortunately, this means that it won’t work on mobile platforms without a Micro-USB to USB converter, but it does support Windows, Android, Mac, and Linux operating systems.

This keyboard has a very simple design, free of the gimmicks and cluttered layout that tend to plague wireless keyboards. It’s a full-size keyboard too, so typing with it feels natural and ensures that this isn’t strictly a “just for Kodi” product.It could easily be used for work.

The touchpad is decent, but it is more sensitive than we’d like. Its “tap to click” feature cannot be turned off and because of the touchpad’s large size, this is often activated accidentally. Also, despite this keyboard sitting squarely in the mid-budget range, it relies on AAA batteries to work. To be fair, this means you don’t have to worry about charging it and with a nine month battery life, the batteries won’t need replacing often.